Stone sculpturing carves out style of its own

An ordinary roadside stone was sculpted into a lotus seedpod by the hands of 44-year-old Pan Haibin.

The cracks in it were used to vividly reflect succulent lotus seeds exploding from the pod.

In the sculptor’s mind, any piece of stone can be made into figurines.

“Natural colors and textures endow stones with variable possibilities to be an exquisite work of art, no matter what they look like originally,” Pan told Shanghai Daily.

Pan is an inheritor of the intangible cultural heritage of Qingtian-style stone sculpturing, which was named after Qingtian County in east China’s Zhejiang Province. 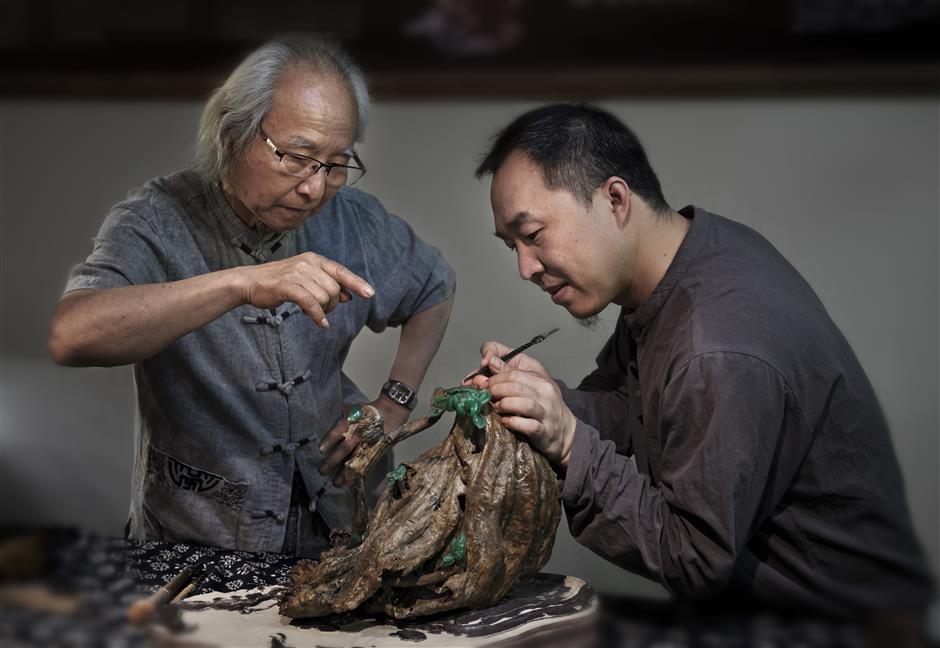 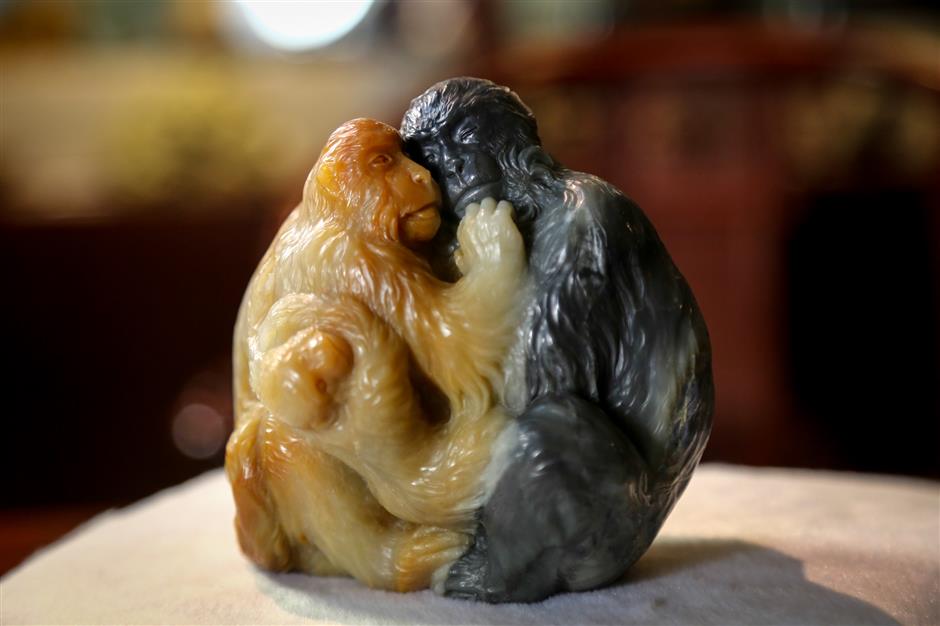 “Reunion” is designed with two monkeys hugging each other. One is in beige and the other is brown. Pan uses the natural colors to create the sharp contrast.

Craftsmen there have long taken advantage of the various forms and colors of stones to create exquisite pieces which integrate natural beauty with human ingenuity.

His father Pan Xicun, a noted sculptor in Qingtian County, was apprenticed to prestigious boxwood sculptor Ye Runzhou and integrated the skills of wood-carving with stone sculpturing.

“The two varieties have common characteristics,” Pan said. “But stone sculpturing requires more artistic knowledge and professional techniques, since stones have a myriad of textures and colors while boxwood has fixed conditions.”

A stone figurine should be designed according to original hues and forms. For example, red is suitable for flowers while white fits figures. Mixed colors sometimes require a sculptor to change the original design.

Also, a stone is made up of different minerals. The rough texture cannot be polished into glossy finish, but the fine part could be carved with smooth lines and surfaces.

“A stone sculptor should learn painting, sculpting and geological knowledge before he or she creates brilliant works,” Pan said. “Otherwise, the essence of stones cannot be brought to light, or is even wasted.”

One of his pieces, “Reunion,” leaves a deep impression on visitors.

It is designed with two monkeys hugging each other. One is in beige and the other is brown. Pan used the natural colors to create the sharp contrast.

“Sometimes people think my works are dyed, while others believe my sculptures are made by high-tech machines,” Pan said. “They are indirectly praising my works.”

Pan and his two brothers started to learn sculpturing from their father as teenagers.

The differences between academic school and folk craftsmanship are obviously reflected in the father and son’s works.

His father’s figurines are often themed on legends and myths, and are always made with top-caliber engraving techniques.

However, Pan focuses on ordinary life scenes and simple designs.

“At the beginning, I loved to show off my sophisticated carving skills and created ornate works,” Pan said.

“After years of practice and changing aesthetics, I found the simplest work always has the best charm.”

The stone lotus seedpod is inspired by a Han Dynasty (206 BC-AD 220) poem, which portrays a scenario of women picking seedpods in a pond with lush lotus flowers.

“One day I heard my daughter reading the poem, so I picked up a roadside stone and sculpted it under this inspiration,” Pan said.

“Artisans can get inspiration during the process of discovering the beauty of life. We should focus on life rather than pompous techniques.” 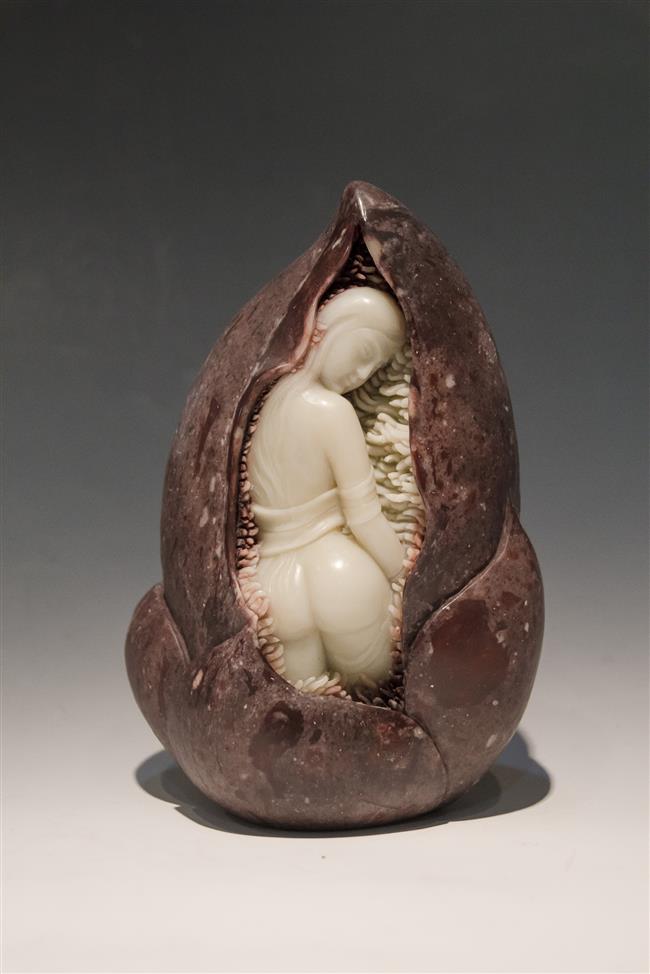 “A Woman in a Lotus Seedpod” by Pan Haibin. The cracks in the original stone were used to vividly reflect succulent lotus seeds exploding from the pod.

In the summer vacation, parents bring their children to Pan’s studio in the China Craft and Art Museum in Hangzhou.

Pan hosts classes with children so the tradition can be passed on.

“It takes decades of practice to reach the pinnacle of sculpting,” he said.

“I encourage kids to learn this craft because it includes design and art along with sculpture. I also teach my daughter to carve stones in efforts to cultivate her to be my inheritor.”

“Machines cannot adjust designs according to the stone’s textures and colors, and the lines are rustic,” Pan explained.

This piece is highly valued because of the scarcity of longdan (dragon’s courage) stone from Qingtian County.

To enrich stone varieties, Pan often travels across the country to look for multifarious stones.

Now they are also valued for their artistic and design merits.