Building preserves and reveals secrets of the Freemasons

And while people may read the books and view the resulting movies to satisfy their curiosity, it is rarely known that a former three-story Masonic Hall in neoclassical style still stands in downtown Shanghai.

The society moved to the Beijing Road W. building near the former Bubbling Well Road after its structure on the Bund was sold and demolished in the 1930s.

“The building at 1623 Beijing Road W., now the office of the Shanghai Medical Association, is an important relic of Freemasonry in Shanghai,” Chinese historian/economist He Xin wrote in his book “Who Rules the World.”

“However, the building is often missed out by publications on Shanghai historical architecture,” He said, who has studied and written about the secret society.

“Shanghai, Weihai, Tianjin and Xiamen all have relics of Freemasonry before 1949,” he noted. 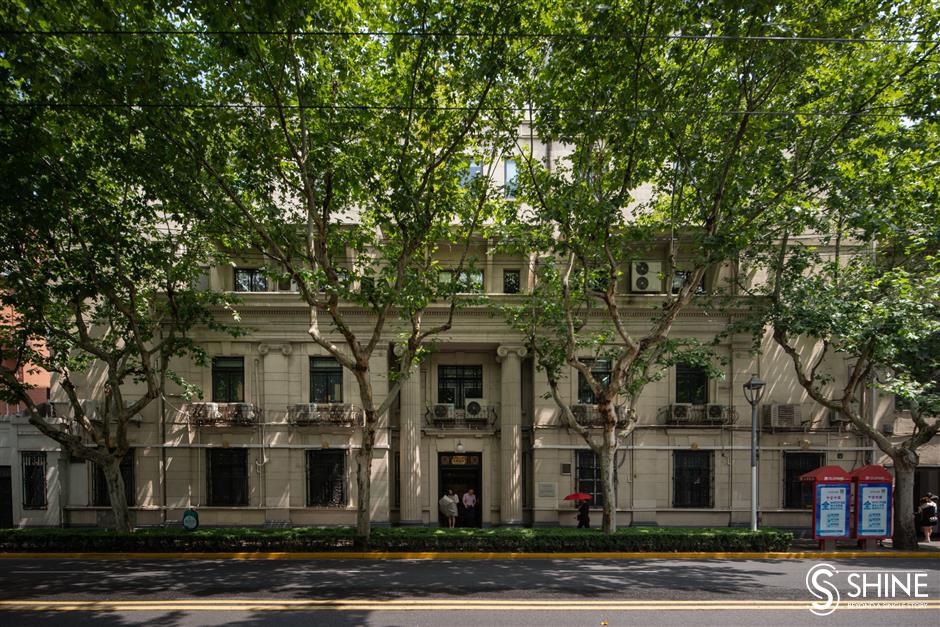 Shrouded under the canopy of plane trees that line the Beijing Road W., the building, now office of the Shanghai Medical Association, is an important relic of Freemasonry in Shanghai.

According to F.L. Hawks Pott’s 1928 book “A Short History of Shanghai, Masonry played an important part in Shanghai life.

“We find that the first Lodge — the Northern Lodge — was established in 1849,” Pott wrote.

“This was followed by the Sussex Lodge in 1863. Its first home was in Park Lane (now Nanjing Road). The foundation stone of the new Hall on The Bund was laid in July 1865, and was one of the first buildings of pleasing character to appear on the water front.”

Shanghai historian Wu Zhiwei said the Freemasons have their origins in organizations for Medieval masons.

“Freemasonry founded over a dozen branches in Shanghai after the city opened as a port in 1843, among them were Northern Lodge of China, Royal Sussex Lodge and Tuscan Lodge that co-funded the construction of the Bund,” Wu said.

They also had a reputation for secrecy for centuries.

“As one of the world’s largest secret societies nowadays, most of their members are white male Protestants, free thinkers and social elites,” Wu added.

The site of the former Masonic Hall on the Bund is now occupied by the Peninsula Hotel.

The society’s most revered room would be open to the public when hosting the famous biannual Masonic Ball for charity fund raising.

Symbolic mysteries added glamor to the ball, which was regarded as the city’s largest feast and enjoyed great popularity.

The fewer than 400 participants in 1886 soared to 1,200 to 1,300 in 1910. The once spacious hall became crowded, which lead to a renovation in the 1910s. But unfortunately the building was partially damaged by a fire in 1918 and later sold to the Japan Mail Shipping Line (NYK), which demolished it and left the lot vacant. 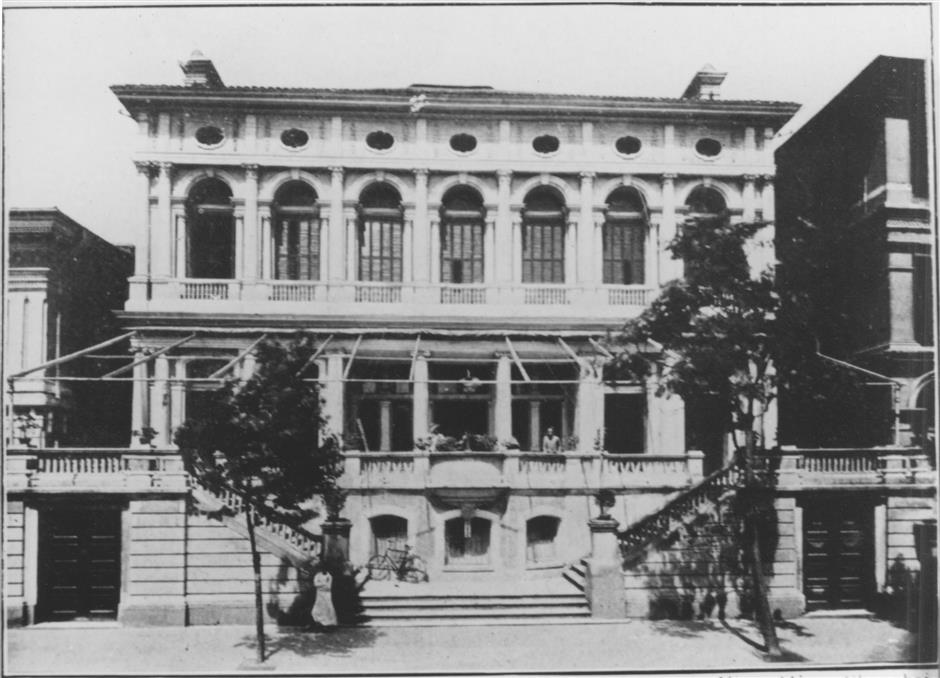 The former Masonic Hall on the Bund

On April 15, 1930, the North-China Herald published a drafting of the new Masonic Hall, which looks very like the one on today’s Beijing Road W.

“As may be remembered the old Masonic Hall on the Bund was sold to the NYK nearly three years ago,” the article states.

“With the proceeds a desirable site at the southeast corner of the Avenue Road and Kiaochow Road crossing was bought at the beginning of this year. For the design for the new building a limited competition was held, six architects taking part. The author of the winning design is Mr J.E. March, A.R.I.B.A., of Messrs Spence, Robinson & Partners. The picture shows Mr March’s design as it will front on Avenue Road (today’s Beijing Road W.). The interior of the building is as well planned for the needs of the Masonic fraternity as the exterior is handsome and imposing.”

The report noted that the building would house English, Scottish and Irish Masons. The American lodges had built a hall adjoining Avenue Petain (today’s Hengshan Road) two years ago.

According to archives from Jing’an District House and Land Management Bureau, the building is a brick-and-concrete structure in neoclassical style with a triangle gable over the top. The facade is adorned with two gigantic Ionic Orders.

In the 1950s it was assigned to six academic societies, including the Shanghai Medical Association.

Currently housing a myriad of medical societies and organizations, the building is well preserved with the original teak wood flooring, staircase and most amazingly, a green-toned grand hall adorned with patterns and symbols. 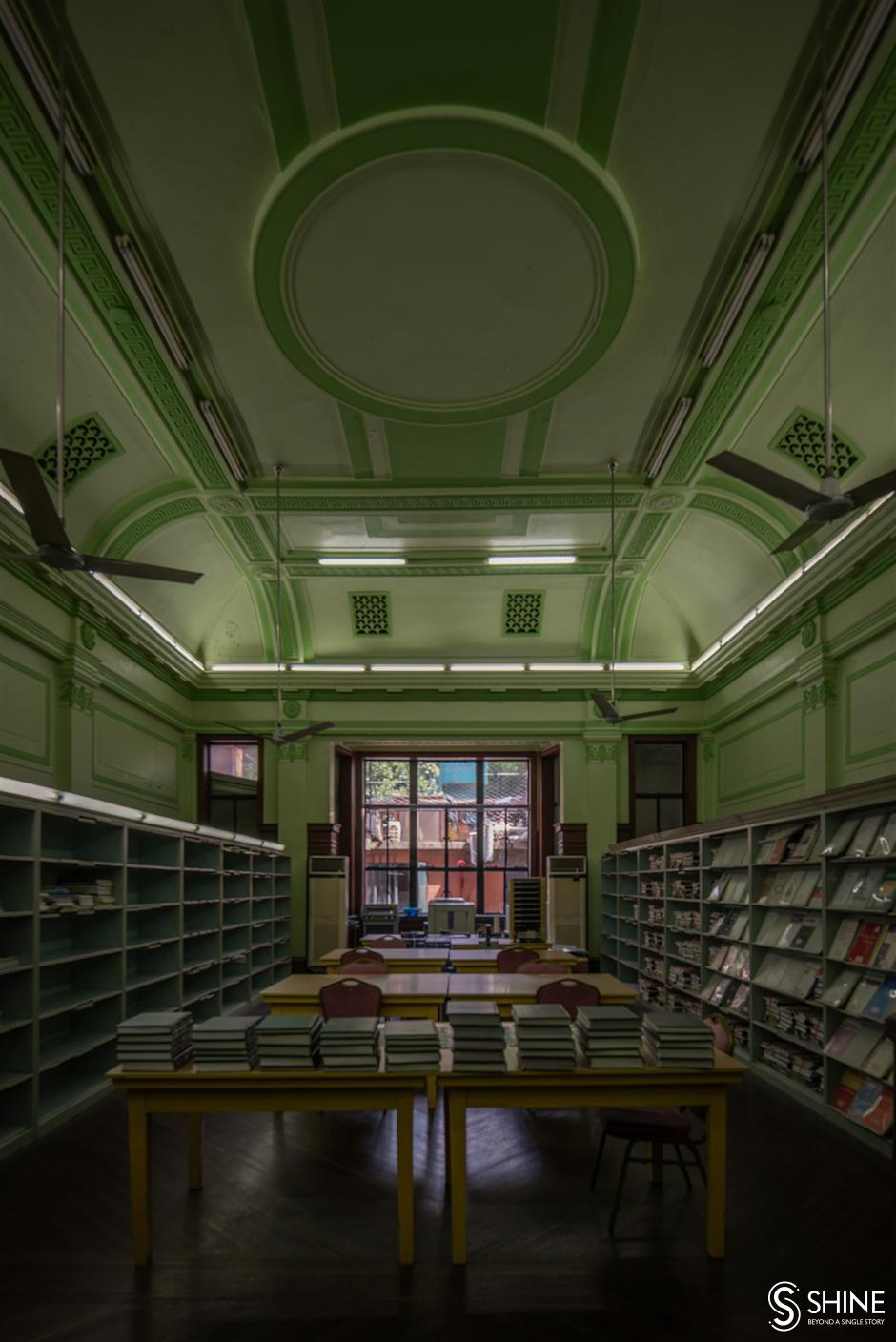 The green-toned grand hall inside the building now serves as a reading room on medical books.

A door in the hall leads to a dim-lighted old bibliotheca with a high ceiling and double-level book shelves, reminiscence of another era and a library in a “Harry Potter” movie.

Zhang Xielin, deputy director of the Shanghai Medical Association’s bibliotheca, said it has more than 2,000 antique medical books, most of which are on traditional Chinese medicine.

Officer Hua Fei from the Shanghai Medical Society recalled receiving Freemason guests from overseas, who recognized symbols in the hall. Some red wooden doors of the building are still graced with the society’s signature — “Compass and Square.”

In his book, scholar He Xin specifically mentioned a stone tablet in the new Masonic Hall, which is inscribed with the names of several Freemasons in Shanghai as well as the construction date — January 1931.

The year “1931” was also written as “AL 5931” on the stone according to a calendar system within the Freemason fraternity. “AL” is an abbreviation for Anno Lucis, which means “Year of Light.”

“We found an iron case hidden in the walls behind this stone tablet which contained a bible and two antique pens,” Zhang with the medical association added.

“Another wall behind the dado is inscribed with names of expatriates who gave donations for the construction.”

To ensure protection for the building, which was not listed in 2012, He lobbied the municipal government.

In 2017, the building was listed in the fifth batch of Shanghai Historical Buildings.

“And we have a plan to renovate this bibliotheca hall into a ‘family’ for medical professionals and scholars for better research and communication,” Zhang said.

Tips: The building is not open to the public but you can admire the original inscription at the left bottom base stone.

On Sunday, November 4, 1934, the First Church of Christ, Scientist, Shanghai held services in this new church building, located at the corner of Avenue and Kiaochow roads.

This is the first Christian Science church to be erected in China, and the opening service will be one of dedication, the edifice being finished and ready for occupancy, free from all debt. 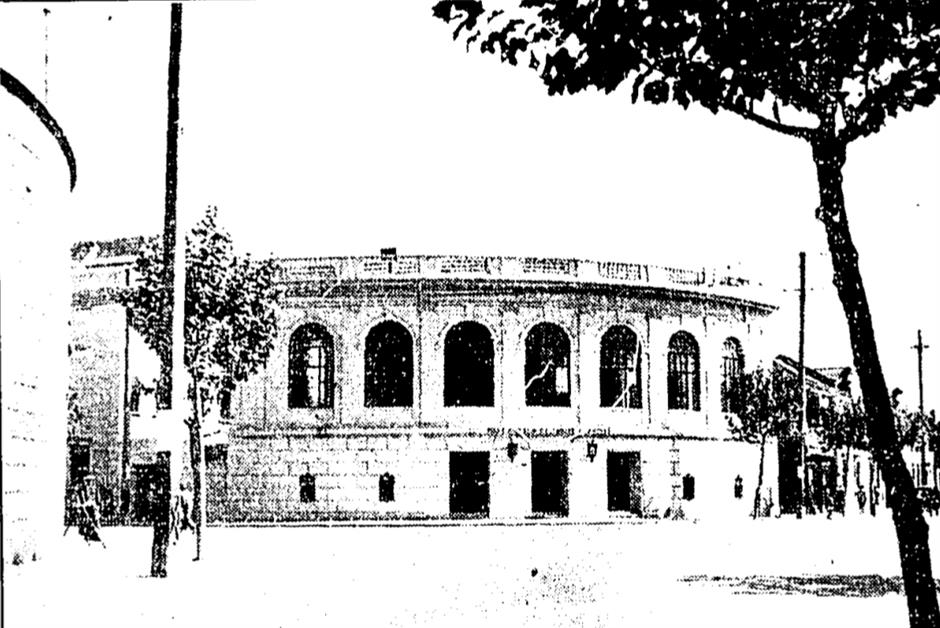 The First Church of Christ, Scientist, Shanghai at the corner of the Avenue and Kiaochow roads

The cornerstone for this building was laid on March 22, 1934, and this structure, now almost completed, is the material embodiment of the aims and hopes of a small group of people who, for the past twenty years, have met for the holding of Christian Science services.

It is built according to the designs of the firm of Elliott Hazzard, Architects, and the style adhered to in the curved facade is derived from the classic Roman.

Brick, covered with plaster, was used in its construction, and the exterior is similar in appearance to buff limestone. Above the entrance doorway, in bronze letters, are the words “First Church of Christs’ Scientist,” and wrought-iron lanterns of artistic design flank the central doorway.

In conforming to the shape of this building site, the semi-circular or fan-shaped plan seemed the only possible solution.

This necessity, however, proved a desirable opportunity, as the arrangement ensuing is especially well adapted to Christian Science services, permitting a convenient seating arrangement with respect to the Readers’ desk.

The interior finish throughout of this building, while modern and artistic in every respect, has been kept simple and restrained, with the idea of preserving an atmosphere of quiet repose and dignity. It must be conceded that the entire edifice, within and without, is an admirable achievement in decorative and classic design, combined with most attractive though subdued furnishings, a notable and outstanding addition to the fast-growing collection of Shanghai’s fine buildings.

In the year 1928 this Society had attained a membership sufficient to become organized as First Church of Christ, Scientist, Shanghai, and thus it is known today.

Services were held in the Masonic Hall on the Bund until that building was demolished, when they were held at the Royal Asiatic Society’s building on Museum Road (today’s Huqiu Road). When the American Masonic Temple was built on Route Dufour (today’s Urumqi Road S.), they arranged to hold their services there, and have been in that location ever since.

The First Church of Christ, Scientist of Boston, Mass, and for many years resident in the home of Mary Baker Eddy, the founder of Christian Science, will lecture in Shanghai, in this new church edifice, on Sunday evening, December 2, 1934, at 9:15pm.