No one knows matches better than the Hu family. They have been working in the Hangzhou Match Factory for four generations. Now, 58-year-old Hu Wuyin is the head of the factory, and trying to save the brand.

His grandmother worked there in the 1920s, and then his mother entered the factory in the 1950s. All of his brothers were workers before 2000. Hu himself has been the director since 2006.

The factory was established in 1909 when the local products were under threat from the West.

Local tycoons built it in collaboration in an effort to boost economic development.

At the time, imported matches dominated the market.

However, the situation in Zhejiang Province soon changed as a result of mass production from the Hangzhou Match Factory.

Hu Wuyin shows the match boxes designed and made by the Hangzhou Match Factory. Hu’s family has been working in the factory for four generations. Hu submitted the application for the match-making technique to be included in the intangible heritage list.

The factory thrived well into the 1980s when production volume, technology and scale were at their peak. The yearly production volume was 800,000 boxes and it employed 1,470 workers. It was one of Hangzhou’s main factories and attracted a large number of university graduates.

The factory invested a lot in research and development, inventing new products and patents.

But from the 1990s, lighters began to replace matches in China.

But it has found a market niche with boutique products including traditional box designs and multi-colored match nibs.

“Today, India accounts for at least 70 percent of match production in the world, but we can still compete with it in top-flight products, especially colorful matches,” Hu said.

“They are not simply dyed, but made from a sophisticated fusion of different chemicals.”

This year is the 110th anniversary of its establishment. However, the factory at Thousand Islands Lake was pulled down last year due to environmental protection and sustainable development requirements.

Hu has preserved the brand and transferred production lines to Fujian, Anhui and Hebei provinces, taking advantage of low-price labor and rent.

Although the glory days have passed, the Hangzhou Match Factory still boasts a special status in China’s match industry — it is the only factory that sticks to traditional techniques in making matches today.

In addition, the factory is a pioneering organization which witnessed the people’s brave rebellion against oppression and the changes of economic systems in China.

The workers also organized a labor union to fight against oppression from capitalists. It is believed to be the first organization of this type in Zhejiang Province, awakening the consciousness of the working class.

In the 1930s, Japanese armies invaded Hangzhou and destroyed many factories.

The Hangzhou Match Factory was no exception. Production lines were halted and buildings were ruined.

In a bid to recover production, workers transported some machines to hidden nooks in the mountainous area in western Zhejiang Province.

When the war was over, only a dozen Hangzhou factories were still running, including Hangzhou Match Factory.

However, its output was small. 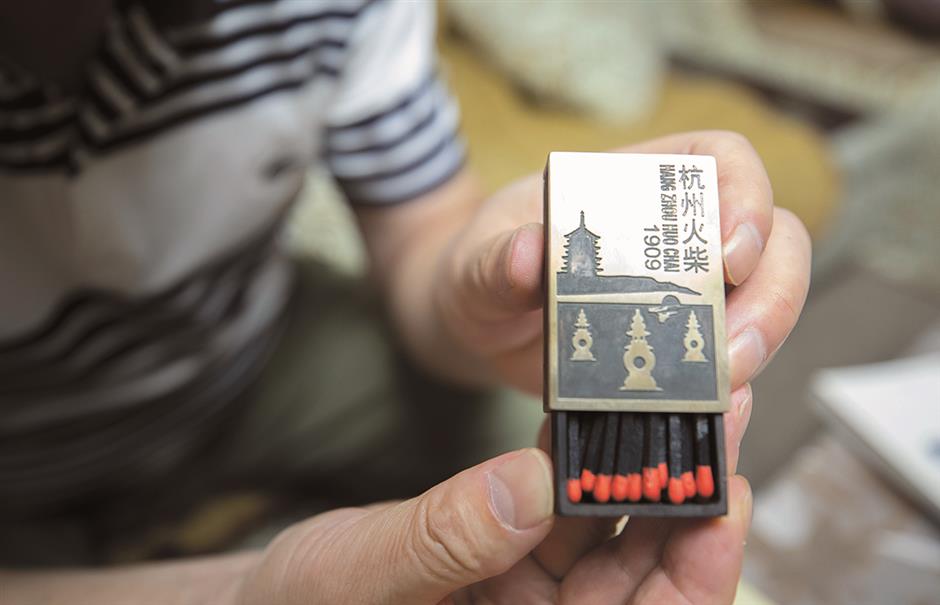 In the 1950s, the new Hangzhou government took over and rejuvenated it.

“Now, I hope Shangcheng District could inscribe the brand onto the list of cultural heritage,” Hu said. “The factory has been declining, thus it requires official protection to preserve its unique history and value.”

Jinghua Residential Community has offered a hand, carving out a space to display the factory’s matches and archives.

“The brand may utterly disappear into history someday,” Hu said.

“But I really hope it could be preserved in people’s memory through our documents and products.”

In addition, Hu is looking for cooperation with creative and cultural companies to produce matches geared toward young customers and out-of-town visitors.

A number of local time-honored brands have been revived by virtue of innovations that cash in on the trend of creative and tourism industry.

“Wang Xingji fans, West Lake parasols and Zhang Xiaoquan scissors are popular with tourists,” Hu said. “I hope our matches could be another calling card of the city.”