Scroll rich in color and meaning 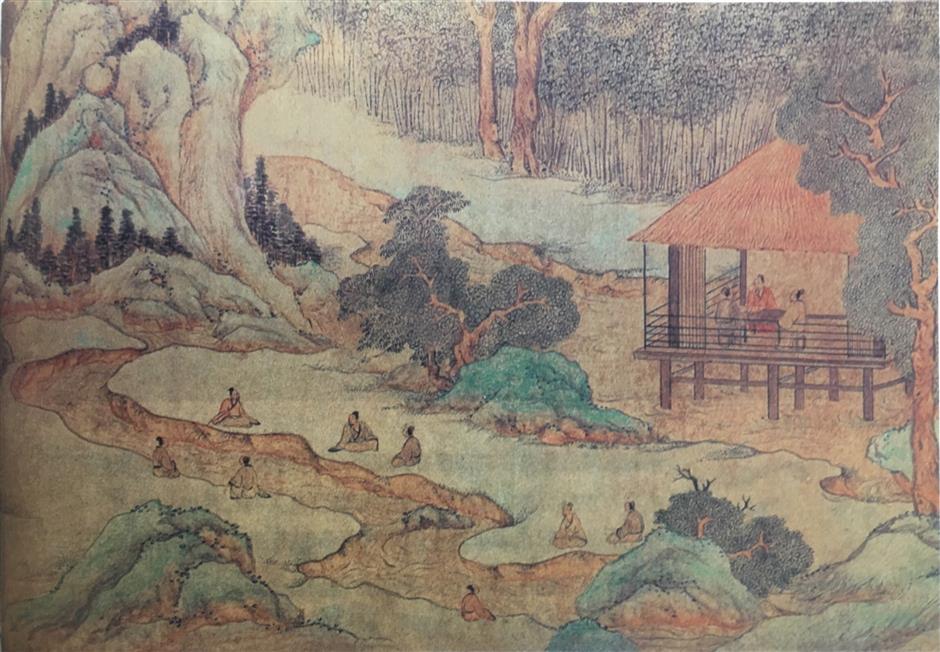 The ink hand scroll “Lanting Xiuxi Painting” (Illustration of the Spring Purification Gathering at the Orchid Pavilion) is considered the most famous work by Ming Dynasty artist Wen Zhengming.

The painting depicts a well-known gathering held by the “Sage of Calligraphy” Wang Xizhi at the Lanting, or the Orchid Pavilion, for an ancient ceremony called xiuxi, which is held along rivers in the seasons of spring and autumn.

Wen’s painting vividly shows the gathering during which Wang wrote the calligraphy masterpiece “Preface for the Orchid Pavilion Gathering.”

Xiuxi was celebrated on the 3rd day of the 3rd month of the Chinese calendar. In the 9th year of the Emperor Yonghe (353 CE), Wang and 42 lovers of literature gathered along the banks of a coursing stream for the ceremony.

Cups of wine were placed in the water upstream, and when one stopped in front of a guest, he had to compose a poem or otherwise drink the whole cup. So the name of the painting is also translated as “Waiting for the Floating Cup by a Winding Stream at the Orchid Pavilion.”

During the festival, people used to go on outings by a river or lake and pluck orchids which they believed had spiritual attributes. Rituals were held to bring good luck and ward off evil spirits.

In the Wei and Jin Dynasties the festival became a wonderful time for people to enjoy waterside banquets and spring hiking.

Wen, who was highly regarded as one of the “Four Masters of the Wu School,” showed his fascination with the landscape around the Orchid Pavilion and the get-together of friends.

As a native of Changzhou County (today’s Suzhou in Jiangsu province), he started reading poetry and literary classics at a very early age, and developed an interest in calligraphy and painting.

Wen was so proficient in poetry, literature, calligraphy and painting that he was respected as polymath in the Ming Dynasty.

His paintings ranged from landscapes, bamboo, and orchids to figures, birds and flowers. He is most well-known for his landscapes.

Unluckily, in officialdom Wen was ill-fated with his genius unrecognized, as he failed the civil service recruitment examination 10 times.

At the age of 54, Wen was finally appointed to a post in the Hanlin Academy (College of Literature.) After staying there for three years, he resigned the office and returned home to devote himself wholeheartedly to poems and paintings.

Over his lifetime, Wen admired Wang’s indifference to fame and wealth.

This acted as inspiration for the painting.

One day, Wen, who was by then 73, was drinking with a group of friends, when Yan Song, a treacherous minister, came to visit.

Yan liked to collect treasure and paintings, and wanted a picture from Wen.

After Wen refused, Yan opened a box full of silver.

However, Wen refused again without hesitation. Finally, Yan went away in a rage.

Back to his room, Wen couldn’t help but ponder on the darkness in official circles and recall Wang’s free and easy attitude toward life, which inspired him to paint the work.

The coloring of “Lanting Xiuxi Painting” is bright and rich in variety, with blue and green as the main tones and light ochre as a decorative color for the stones at the foothills.

Wen’s brushwork featured two distinct styles. One was a rough approach that mirrored his understanding of art masters Shen Zhou, Wu Zhen and Zhao Mengfu to outline spaces, trees and bamboo. The other was a refined approach to depict details and delicate forms. The refined style became a feature of “Wu school” painting.

In this painting, Wen has specially adopted the blue-and-green landscape technique, outlined and then rendered the trees and stones with refined strokes, and portrayed the faces with expressive lines.

And at the beginning and end of the painting is Wen’s transcription of Wang’s “Preface for the Orchid Pavilion Gathering.”

The painting is now in the collections of the Palace Museum in Beijing.