Four performances of music, dance, drama and Cantonese Opera will be presented by Hong Kong-based artists in Shanghai in November and December.

The last time the Hong Kong Special Administrative Region government organized a large-scale cultural exchange in Shanghai was at the 2010 World Expo.

“We have been working on bringing more Hong Kong art groups to regions out of Hong Kong, especially to mainland metropolises like Beijing, Shanghai and Guangzhou,” said Chan Kin-bun, committee member of the Hong Kong Arts Development Council.

“The Hong Kong artists coming to Shanghai this time cover different age groups. To enhance their communication with mainland counterparts and audience is our purpose.”

“The Tragedy of Macbeth,” presented by Tang Shu-wing Theatre Studio, is a rendition of the Shakespeare classic in physical theater. The story features a modern couple’s dream of becoming Macbeth and Lady Macbeth in ancient China. The couple encounter a string of events from which they become aware of the darker sides of their minds and the intricacies of humanities. 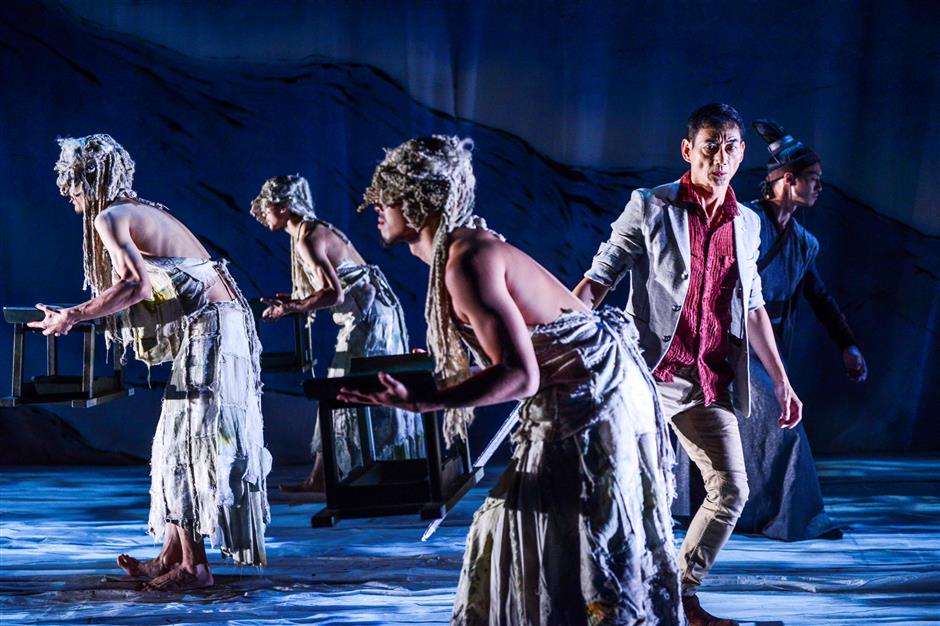 "The Tragedy of Macbeth" is presented by the Tang Shu-wing Theatre Studio.

“The work is a mirror to human nature and morality,” said director Tang Shu-wing, who has received various accolades including three Hong Kong Drama Awards Best Director awards. Tang is acclaimed for elevating the fusion of Eastern and Western theater, and instilling a rich imagination in Shakespeare’s plays with physical theater.

“The Tragedy of Macbeth” was originally commissioned by London’s Shakespeare’s Globe and the Hong Kong Arts Festival four years ago. The performances, to be staged at 1862 Theater in Shanghai on November 16 and 17, will be in Cantonese with Chinese subtitles.

The actors playing Macbeth and Lady Macbeth will reverse their roles in the second act, compelling the audience to examine the implications of gender roles in modern society and the different facets of human nature in its psychological dimensions.

“One City Three Tales” consists of three sections — “Folding Echoes,” “Danceless03 — Bolero” and “A Short, Thick Rainbow.” “Folding Echoes” is a solo dance exploring how contemporary dance performance is being interpreted and comprehended, especially in a theater setting in modern society.

Lee said the “echoes” in the title refers to the experience an audience will have when they enter the theater. When they start to question the unexpected choreography, they initiate an inner conversation with their past experiences, which is like echoes within themselves.

“Danceless03 — Bolero” is based on the rhythmic and repetitive music of Ravel’s “Bolero,” focusing on the theme of “growing old.”

“A Short, Thick Rainbow” is co-created by Unlock Dancing Plaza and Japan’s Namstrops dance group, in which dancing is innovatively combined with sports.

Namstrops is the reversed spelling of “sportsman.” The name reveals not only their members’ athlete background, but also their methodology of exploring the boundary between sport, art and education. 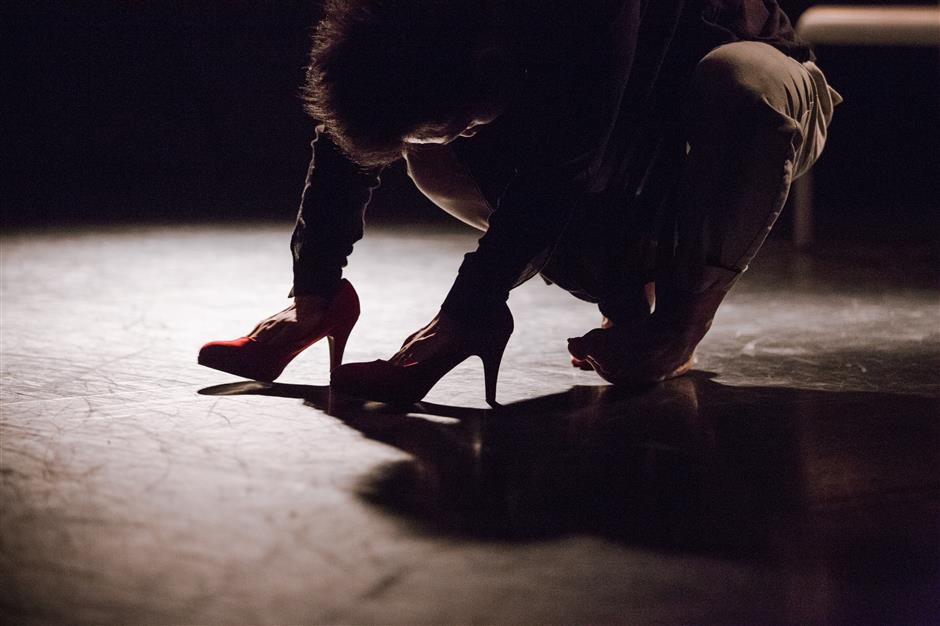 "Folding Echoes" explores how contemporary dance is being interpreted and comprehended. 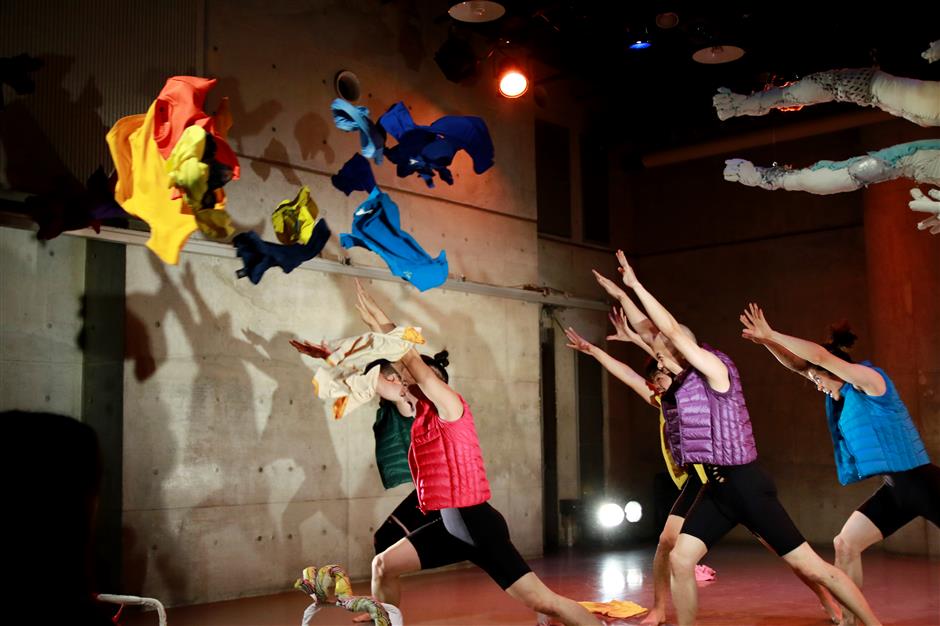 The work pays tribute to Mozart and Lorenzo da Ponte, featuring arias from operas of “Cosi fan tutte,” “The Marriage of Figaro” and “Don Giovanni.” The artists will be singing in bel canto, but the songs will be adapted into pop, jazz and even rock and roll styles.

The story starts with Da Ponte inviting Mozart home to look at his newly purchased piano. Mozart takes Figaro with him, and they encounter the young housekeeper and her visiting sister. The story then goes on with arias and music from the three operas.

“The idea came when I was thinking of how to introduce classic art and music to the younger generation, including my son,” said David Quah, tenor and musical director of Bel Canto Singers. Quah was in charge of music adaptation in the work.

“We want to present classic opera in a modern way, which narrows the gap between classic art and the audience in a modern age,” Quah added.

“When Mozart Meets Da Ponte” will be performed at 1862 Theater on November 30 and December 1.

Traditional opera lovers can get a taste of authentic Cantonese Opera when the Spring Glory Cantonese Opera Workshop presents “Showcase of Four Major Roles” at Changjiang Theater on November 8 and 9.

Artists of all the performances are organizing lectures and workshops in Shanghai this weekend to promote their works and share their art. 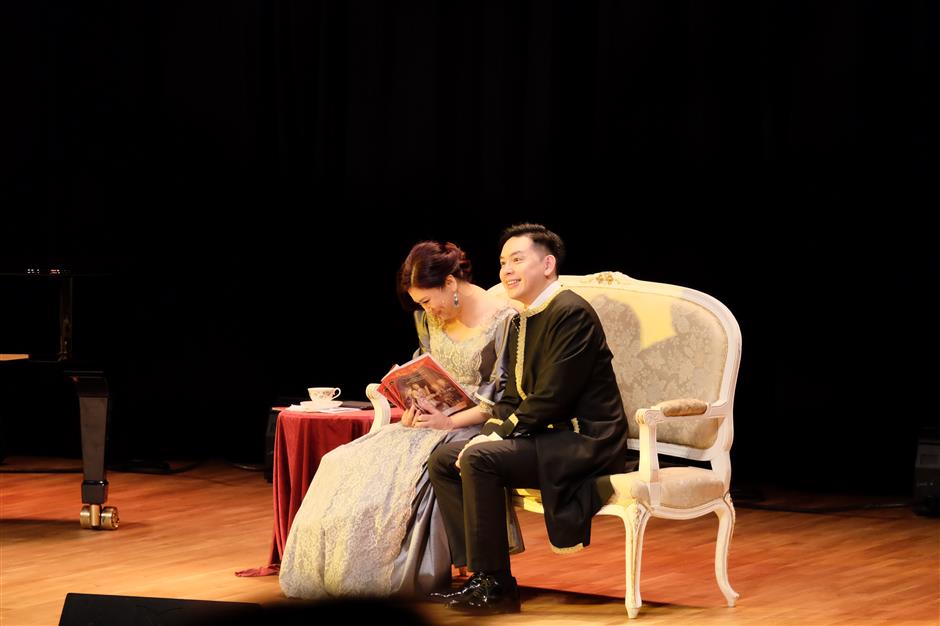 “When Mozart Meets Da Ponte” is a pop-opera in which popular music elements are mixed with classic opera.