Family trees have many branches for sleuth to untangle

For the past 10 plus years, Ge Chengwu has been a detective of sorts. When not in the classroom teaching, he is hot on the trail of ancestry.

Ge has compiled hundreds of genealogies for families sometimes as large as 100,000 people or more. The biggest assignment he ever undertook involved a clan with about 240,000 members.

“It sounds incredible, but the work is doable,” says the 41-year-old. “Although it comes at a cost of time, energy and hair color. I’m turning gray at a rapid rate.”

As a nation that deeply prizes family values, China has a long history of interest in genealogy. It traces back to before the Qin Dynasty (221-206 BC). In the beginning, only royal and wealthy families recorded their lineage, but it was a custom that survived down the centuries.

Nowadays, most younger people probably have no idea of their family roots. Ge didn’t have much knowledge about that either before he got involved in genealogy.

“An old person in our family compiled our genealogy,” says Ge, a native of Jinan, capital of Shandong Province. “He had very bad eyesight and his hands trembled, but he still wrote every character, even every stroke, ceremoniously, as if he were undertaking a holy task. I was touched and helped him with family tree arrangement. That’s how I became intrigued by genealogy.” 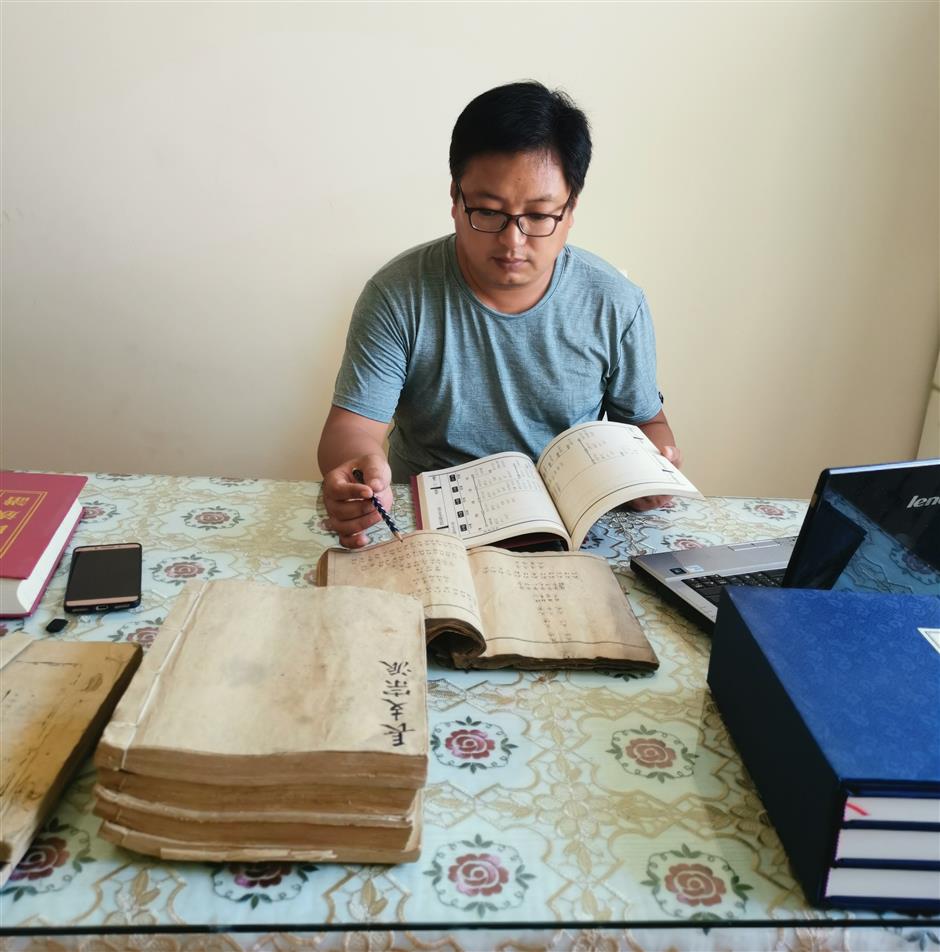 Ge Chengwu gets on the trail of bloodlines even when their history is poorly documented.

It takes a lot of sleuthing. It’s easy to trace lineage if a family already has a record of ancestry that needs only updating. It’s a bit harder when Ge takes on a case with limited information and scant background material.

He cites the case of a clan with the surname Zhu from Zhujiawa Village in Shandong. The family asked him to create a new family tree after a previous one was destroyed during the “cultural revolution” (1966-76).

The clan now has about 70,000 members — all descendants of Zhu Zuliang, a founding hero of the Ming Dynasty (1368-1644). After Zhu was killed by the Emperor Zhu Yuanzhang, his only son hid in the town of Zhujiawa and kept the family line alive.

“The families could provide only what we call gongzhe, a simple name list of a very limited number of ancestors that was used in ceremonies of worship,” Ge says. “So we collected nearly 50 gongzhe from Zhu families, spread them all on the ground and checked every name. With the help of the family members, I finally managed to identify the relationships between names.”

When it comes to especially large projects, Ge needs help beyond just immediate family members. One example is a clan with the surname Yin and 240,000 members. They are descendants of Yin Jian’er, a general in the Yuan Dynasty (1271-1368), and his three brothers. The brothers’ ancestors probably came from Henan Province, the descendants of the Shang Dynasty about 3,500 years ago.

Ultimately, around 300 people were involved in the project. They went to police stations, archives and local annals offices to collect information. The genealogy that resulted contained tens of thousands of pages. 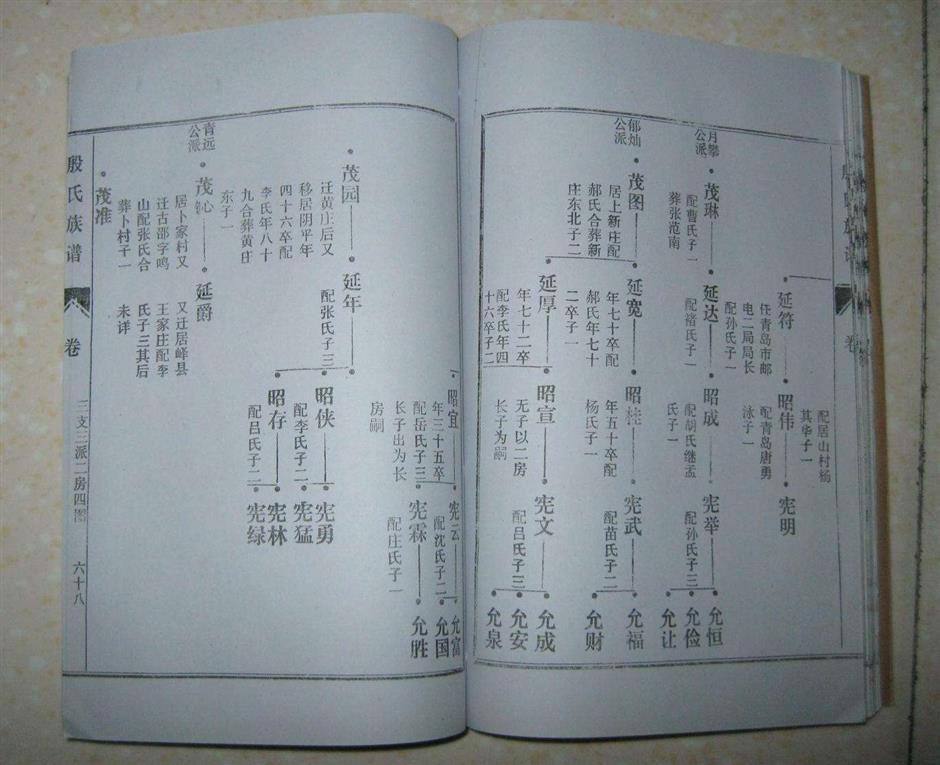 The genealogy of the Yin clan in Weishan

According to Ge, two methodologies of genealogy developed in China, and both were regulated during the Northern Song Dynasty (960-1127). One involved writer Su Xun (1009-66); the other historian and politician Ouyang Xiu (1007-72). The forms haven’t changed much since, though some improvements have been made. The full names of women, for example, can now be written into genealogy, whereas in the past, they were identified only by surname.

The methods of both structures have remained essentially the same. A general family tree is constructed and then a more detailed account of every member — such as birthdays and date of death, professions, official positions and marital status — is provided. An appendix is included.

While the Ouyang form emphasizes seniority in a clan, the Su method separates direct families from collateral relations.

“A Chinese saying goes: ‘Compile genealogy during peaceful days and buy gold during turbulent times,’” says Ge. “Because we’re now living in prosperous times, some people are again wanting to document the history of their families, despite the fact that the general culture of genealogy itself seems to be dying out.”

Ge’s work has gained him somewhat of a reputation.

A man surnamed Li, who is now living in northeast China, turned to Ge for help while on a business trip to Jinan. He said he wanted to fulfill the wish of his late grandfather, who asked him to return to the family hometown and have a look around.

His grandfather left his hometown, a village on the banks of the Yellow River, in the 1920s. Li had heard the name of the village from his parents.

“In past centuries, many villages were destroyed or moved or merged with other villages under a new name,” Ge says. “Li’s hometown happened to be one of them.”

Ge’s research found that the village was a victim of the 1938 Yellow River flood, in which more than 890,000 people lost their lives after the then Kuomintang government opened the dikes to stop the advance of the Japanese army. The flood survivors moved to another place.

Following Ge’s instructions, Li found descendants of the family clan. It had kept a genealogy that recorded his grandfather’s name. Li expressed great appreciation for finally finding his roots.

“The Li clan is actually a very typical example,” Ge says. “If you study the genealogies of families once living on the banks of the Yellow River, you find that many families had very detailed family trees. Then, suddenly, the records show the words for ‘mountain’ or ‘ridge’ in the places the families moved to. It shows that people had suffered enough and decided to move completely away from the river.”

Ge says genealogy has twin benefits. It can show young people where they came from and give them a sense of family values. It can also be a supplement to historical data.

“The country and its regions have systematic historical records, which sometimes lack details,” he says. “Genealogy can help fill in the blanks of significant historical events.”