Men in sports as depicted in the painting “Amusements on Ice” (detail). Winter sports thrived in the Qing Dynasty (1644-1911) where they were seen as an essential part of Manchu traditions and vital to military training.

The 2022 Winter Olympics is scheduled to take place from February 4 to 20 in Beijing and towns in the neighboring Hebei Province.

For Manchurians, winter sports were more than recreational activities but significant for the military.

During a winter campaign in northeast China, part of his army was surrounded by enemy tribes.

Nurhaci planned to send reinforcements but it was up to 700 li (350 kilometers) away, and there was a frozen river to cross as well. A general then came forward to volunteer to lead the reinforcements.

All his soldiers were good at ice skating. Using skating equipment, they hurried to save their comrades.

They arrived at the enemy camp in the morning and quickly defeated their unprepared and tired opponents. Nurhaci was pleased with the victory.

In the aftermath, the emperors of the Qing Dynasty paid special attention to ice sports, which became a significant part of the troop review in winter. 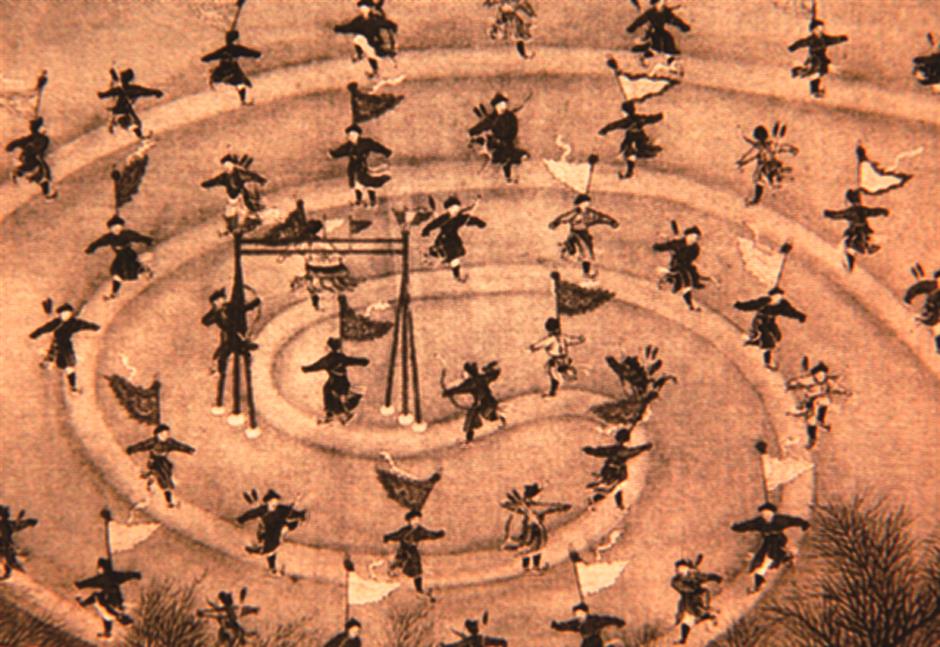 “Amusements on Ice” (detail) depicts an annual event held on the three lakes collectively known as Taiye Chi, or the Pools of the Supreme Fluid.

Winter recreations on ice was considered as one of four national traditions in the Qing Dynasty along with Manchu language, riding and shooting, and wrestling.

The imperial court selected 1,600 soldiers from the Eight Banners every year. The soldiers gave a performance of winter activities to emperors in the twelfth month of the lunar calendar.

“Amusements on Ice” depicts the annual event held on the three lakes collectively known as Taiye Chi, or the Pools of the Supreme Fluid. The pools consist of North Lake, Central Lake and South Lake, which are located to the west of the Forbidden City.

Instead of traveling in a carriage or a palanquin, Emperor Qianlong came to the frozen pools in a dragon-boat-like vessel. Two long angle bars were attached to its base, allowing attendants to slide it across the ice.

Emperor Qianlong was in a wooden shed covered with yellow silk.

A number of nobles, officials and servers stood behind the extravagant vessel, which was decorated with a gold lacquered top and colored patterns.

The 1,600 soldiers were divided into two teams, one dressed in red and another in yellow.

Wearing leather kneecaps, the participants had flags showing their banners on their clothes. Their ice skates were quite primitive, made of steel blades attached to planks, which were tied to leather boots. Although the equipment was not that professional, the ice-sports masters practiced many challenging actions, including standing on one foot, skating while shooting arrows, doing a handstand, making a human pyramid, drumming, and dancing with a sword.

All the participants, whether won or lost the game, were given a reward by royal families.

There was widespread public interest in the activities. Many people would take part in the hope of gaining a position in the imperial court.

It is said that a man named Xi Gui from the Miao ethnic group in the Qing Dynasty was promoted to an imperial bodyguard by Emperor Qianlong because of his superb skating skill.

According to the experts from the Palace Museum in Beijing, the 578.8-centimeter painting is the most precious one of those with the same theme.

It is extremely hard to preserve the painting in ink and color on silk, so it can’t be exposed to air for a long time. The national treasure is well-kept in the storeroom of the Palace Museum.