Zhou Tian’s path is familiar to many Chinese born after the country started its economic reforms in 1978. Born in Hangzhou, Zhejiang Province, in 1981, he spent six years of middle school and high school in Shanghai before taking off to study at top music institutes in the United States.

Unlike his Chinese musician predecessors, like Tan Dun or Zhou Long who arrived in the US much older and had initially struggled with the clashes of different cultures and music styles, the 38-year-old Grammy nominee sees his upbringing as multicultural.

“Since I was born, we have both American and Chinese dramas side by side on TV. For me, there was never a clash of Eastern and Western cultures, it was a natural integration as I grew up,” Zhou told Shanghai Daily on his latest trip to Shanghai, a city he considers his second home.

“So naturally there is also such integration in my music.”

In the US, Zhou was trained at Philadelphia’s Curtis Institute of Music, New York’s Juilliard School and the University of Southern California, studying from American composers like Jennifer Higdon and Christopher Rouse.

Zhou sees his background a staple for his music, and it’s reflected in his body of work, which extends from distinctively Chinese to nearly no trace of a cultural background.

Zhou has drawn inspiration from ancient Chinese poems, such as the latest piece commissioned by Shanghai Symphony Orchestra for its 140th birthday, “Gift,” which premiered at the end of September in Shanghai at the orchestra’s opening program for the 2019/2020 season.

“The title ‘Gift’ is drawn from an ancient poem which literally translates as ‘music as a gift of decency,’ and that just resonates with my own reading of music and tribute to Shanghai Symphony Orchestra, one of the oldest in Asia and the world,” Zhou said.

As the artist in residence for the orchestra, a total of eight works by Zhou will be presented this season, performed by guest orchestras and musicians from all over the world, including cellist Wang Jian and conductors Jaap Van Zweden, Domingo Hindoyan and Ion Marin.

He has also composed an orchestra piece “Rise” to honor American veterans in World War I, a commission by Allentown Symphony Orchestra. Zhou spent time in the US Library of Congress reading memoirs and diaries written by soldiers.

The two countries and cultures, connected for decades, also cross paths musically in some of Zhou’s works, such as “Transcend,” a piece commemorating the 150th anniversary of the first transcontinental railroad completion. The railroad, completed in 1869, hired Chinese immigrants at the time.

Zhou revealed he wanted the piece to “celebrate human perseverance, and to pay tribute to his own cultural heritage.” In the three movements, the audience experiences both serene strings of beautiful scenery on a train journey and also epic and sometimes violent percussion, as if going through a tunnel, until it concludes with incorporation of the rhythm of Morse code for the word “done,” which was sent across the country when the railroad was completed.

Growing up with both Chinese and Western cultures, Zhou was exposed to R&B, jazz and rap music early on through his composer/songwriter father, who encouraged him to expand his music vocabulary while he was studying classical music as a child.

But it wasn’t until he arrived in the US before turning 20 that the young composer sought to seriously explore his Chinese roots.

“Of course I grew up with Chinese culture, but I was too young at the time to fully understand the folk songs or the ancient poems, not to mention to incorporate in a systematic way,” he said. “And somehow, after I went abroad, I got intrigued by Chinese culture. It felt very special when reading the ancient poems and I think it was bigger than just a sense of homesick.”

Such rediscovery and reconnection was instantly reflected in his compositions, such as “Trace,” originally titled “Poems from a Vanished Time,” telling his own experience of the rapid industrialization of China accompanied by disappearance of some old cities and traditions.

The Cincinnati Symphony, which got to know and was intrigued by Zhou’s music after playing “Trace,” later commissioned him to write “Concerto for Orchestra,” a nominee of 60th Grammy Award for Best Contemporary Classical Composition.

Some critics found nothing overtly Asian in this piece while others attribute his gift for lyricism and evocative color to his Chinese upbringing.

Such different perceptions would surely satisfy Zhou, who doesn’t want to restrict himself as a Chinese-born composer while trying to explore ways to integrate his cultural roots through international and contemporary music language.

“For me, there is nothing that’s all Chinese or all Western in my music,” Zhou said. “Usually my music consists some Chinese ambience and is written with the most contemporary techniques in classical music world.

“It doesn’t mean it’s all Western technique, as the most contemporary and advanced techniques in today’s classical music is not necessarily the Western ones. Now it is a multicultural integration of all the best from all over the world.”

He rarely puts Chinese musical instruments on the stage, a method so successfully explored by many Chinese musicians of the previous generations.

Zhou is grateful for their introduction of Chinese music and culture to the world stage while determined to try something else.

“They have really paved the way and explored all the possibilities to integrate Chinese music instruments into a symphony orchestra, so successful that my generation of Chinese musicians feel like we need to explore something else,” he said.

“We certainly don’t have the vast knowledge and reading of Chinese music as they did. But also, thanks to the foundations they laid, audiences around the world are now more familiar with Chinese sounds and they will recognize it even without a visual presentation of Chinese instruments.

“It’s like you don’t need an electric guitar on stage to appreciate the American music of Aaron Copland or a Russian instrument to appreciate the Russianness of Tchaikovsky. Same goes for Hungarian or German classical music.”

Zhou also cites the increasing exposure of Chinese culture helpful for an audience not familiar with Chinese music to recognize the cultural identification in the melodies, naturally.

“It was very intriguing for me to turn a concrete performing technique into an abstract theme and try to present it musically,” Zhou said.

“Much like the flowing sleeves in the Chinese opera, for a musician, the instrument is an extension of the body and mind, and the music is expressed through sophisticated movements of the fingers and arms. The interplay of the two artistic traditions fascinates me.”

The four movements of the piece are named after the four most common flowing sleeves actions — “Brush,” “Lift,” “Reflect” and “Dance,” conveying the emotions through the musical protagonist — the cello.

During his tenure as artist in residence, Zhou will also compose a new work for the 2020 Isaac Stern International Violin Competition, in which the contestants are required to perform a Chinese piece.

“I plan to do some research in Shanghai, my second hometown, where I spent my middle and high school years and where my world view and values were formed,” he said. “I want to explore ways to incorporate distinctive Shanghai culture into this new piece.” 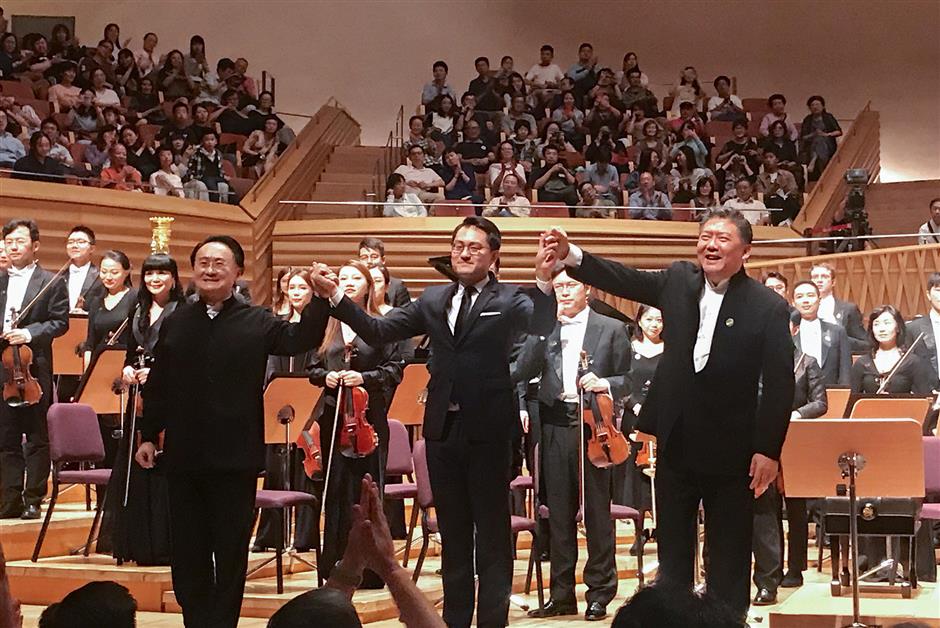