'Gateway to 100 pleasures' was at forefront of city's entertainment

The Paramount Ballroom, a glistening Art Deco theater, was not only at the forefront of entertainment in the heart of Shanghai in the early 20th century, it was patronized by Hollywood superstars, such as Charlie Chaplin, became a den of iniquity for city gangsters and provided the scene for one of the metropolis’ most mysterious murders.

“The Paramount Ballroom was one of four major theaters in old Shanghai. It was a Western-style architectural building but it was mainly invested in by a wealthy Chinese merchant named Gu Liancheng from Nanxun of Zhejiang Province,” Zhang Yaojun, a researcher from Shanghai Archives Bureau, said. 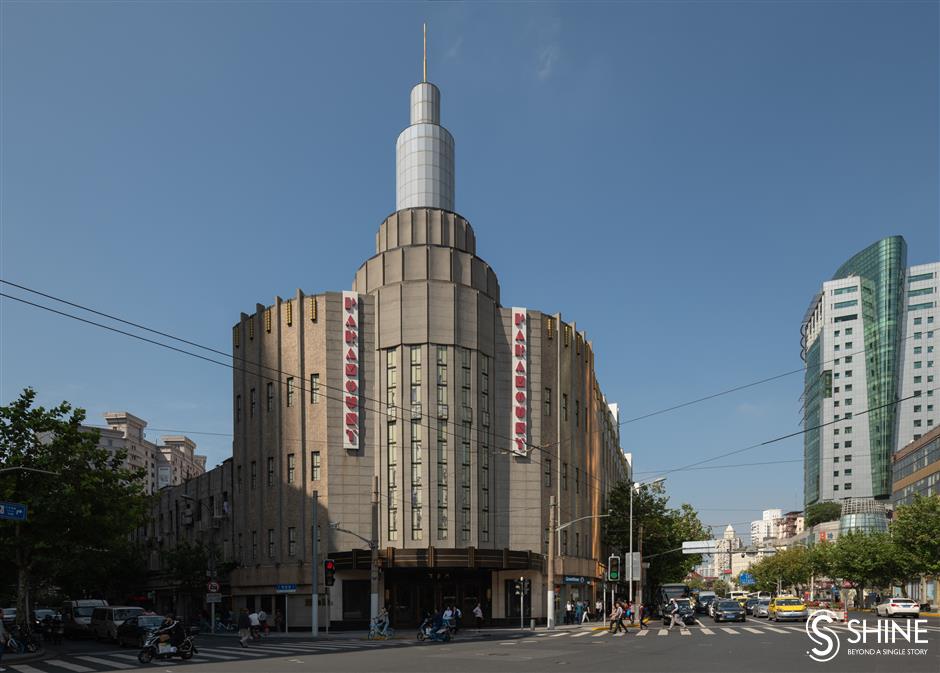 The Paramount Ballroom is a glistening Art Deco theater at the forefront of entertainment in the heart of Shanghai in the early 20th century.

When the ballroom threw its doors open in 1933 on December 15, The China Press reported that the new million-dollar establishment was perhaps the most luxurious structure of its kind ever attempted in China or the Far East.

“Modern in every respect, with a fine color scheme, excellent orchestra, service and entertainment, the ballroom lived up to its boast of being the most beautiful nightclub this side of the Pacific,” the newspaper said.

The China Press revealed the theater was decorated on a lavish scale and the owners of the establishment had tried to provide the best in entertainment.

“The illumination is a little short of spectacular while the draperies, fixtures, et cetera, have been purchased with an idea of effectiveness rather than any thought of saving money,” the report said.

“One was a spring floor and upstairs was a kind of crystal floor made of glass and illuminated by light bulbs,” he said.
The spring floor was where silent film legend Chaplin danced with his movie co-star and companion Paulette Goddard on his one and only night in Shanghai in March 1936.

The China Press said the spring floor was outstanding for dancers and for the presentation of ballroom acts and theatricals.

The crystal floor, however, was effectively illuminated for the use of the Paramount’s patrons, who were using private dining rooms upstairs and did not wish to walk down a flight of steps to the main dance floor. There were two private dining rooms in the place, both large enough to accommodate large parties. 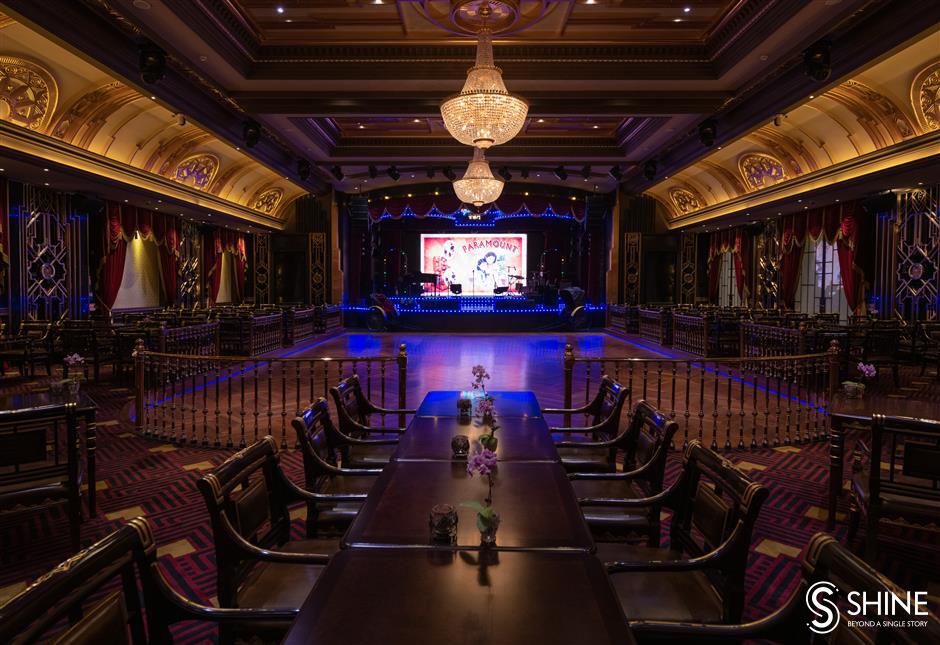 The ballroom “with its soft lights, beautiful walls has an excellent floor for gliding feet” — all means of luxury and comfort.

Zhang added that it was an investor named Gu that gave the ballroom both English and Chinese names.

“With the intention of building it as the ultimate, No. 1 music hall in the Far East, he named it “Bai Le Men,” literally meaning the gateway to 100 pleasures in Chinese, which was easy to remember and had a good meaning,” Zhang said.

It seems the Paramount Ballroom had a fitting name and got rave reviews after its grand opening.

“The ballroom with its soft lights, beautiful walls has an excellent floor for gliding feet. The enchanting dance orchestra and charming star entertainers is truly a gateway of a hundred pleasures, as its Chinese name well suggests. All means of luxury and comfort that appeal to modern men and women of good taste are happily and harmoniously assembled in this ball. I am sure that friends present here and many others that will frequent the ballroom in the future find it the best place in which to spend their leisure hours with the maximum amount of enjoyment,” a guest was quoted in the preview of the new ballroom in 1933.

At the opening, the Paramount Ballroom had a hotel section which was fitted with a large number of suites, all decorated and fitted out on a lavish scale. These suites were each fitted with a sun porch and verandah, giving occupants an accommodation few establishments could boast of at that time. And in the tower of the building there is a bridge room with three or four tables.

The paramount establishment was not only a Chinese investment, but the building was designed by a Chinese architect named Yang Xiliu.

“Like other Chinese architects of his time, Yang not only conducted design work as a profession but also taught lessons in university. So he was good at both theoretical research and design practices. His signature works include a Christian church named Hong De Tang, the Nanking Hotel, the Paramount Ballroom, the Stadium of Nanyang College, to name just a few.”

Zheng added that among them, the Paramount Ballroom was Yang’s most famous work, which had encountered many historical changes and was renovated from top to bottom in recent years to be far different from the original style.

“Yang used a lavish style of sound, light and electricity and a spring floor to design this building. It was an early practice of entertainment architecture designed by a Chinese architect, his exploration of modern Chinese style,” Zheng said. 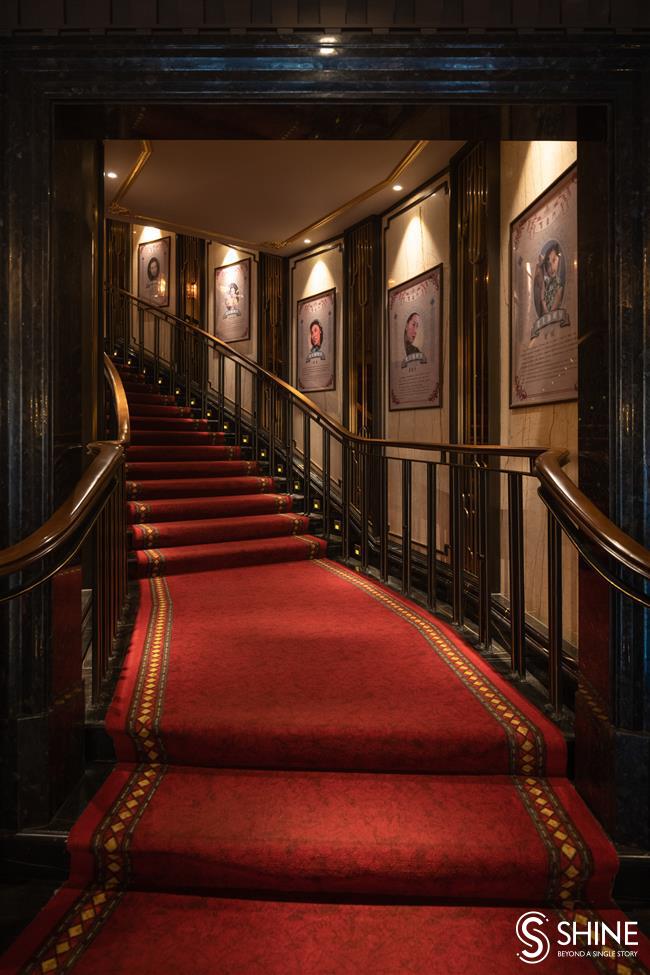 The corridor gallery shows many of the portraits of the famous singers who performed at the Paramount Ballroom.

He notes that many of Shanghai’s historical buildings are the work of China’s remarkable first general of architects. Other examples include the Majestic Theater by Fan Wenzhao and the Shanghai Concert Hall by Fan Wenzhao and Zhao Shen along Nanjing Road.

He explains that traditionally the profession of an “architect” did not exist in China — only builders and craftsman. But things changed after the first series of Chinese, who studied architecture overseas, returned to the country in the 1910s and took advantage of a building boom that was just under way.

The city was undergoing massive architectural changes as more people poured into the “Paris of the East” and places for living, working and entertainment were built with amazing speed.

When Chinese students returned from overseas with architectural degrees, they joined foreign architectural enterprises, or later opened their own companies like the Allied Architects.

There were also Chinese architects who received training at home and designed excellent buildings like the Great World Amusement Center in the vicinity of the People’s Square.

“The work of Chinese architects has been undervalued and lesser known to the public compared to foreign architects like Park Hotel designer Laszlo Hudec,” the professor said.
Yang’s career was long and he participated in the 10 signature buildings of new China designed after 1949.
The well-designed Paramount Ballroom used to be an expensive nightclub for the upper class.

“Paramount Ballroom was a ‘money-squandering den’ where the working class could not afford the entertainment. A cup of green tea was priced at a half yuan which could buy 4.5 kilograms of flour at that time. A steak cost 1 yuan and a bottle of champagne 16 yuan. So guests were mostly the wealthy or notables. It was where General Chennault, commander of the Flying Tigers during World War II, and Anna Chan engaged,” Zhang said.

He mentioned the most famous incident in the ballroom was the murder of its most renowned dancer Chen Manli.

“As the most popular dancer in the Paramount, Chen was taken as a concubine by one of her guests, bibliophile/banker Liu Huizhi, the Shanghai branch manager of the National Industrial Bank of China,” Zhang said.

The North China Herald reported Chen later returned to her profession of “taxi dancing” after her husband Chu Shui-fu, manager of the Kiu Fu Company, died.

A gunman fired five shots at her as she sat at a table with two Chinese men friends. One friend was fatally wounded, while the other escaped with a slight injury. Chen died a day after the attack on February 26, 1940, from wounds to the abdomen, back, neck and shoulder.

It is still a mystery why she was killed. The Paramount Ballroom did not churn out a profitable business for long and it encountered twists and turns in the following years.

“Although it successfully gained the cultural brand of ‘King of the Dance Halls,’ in terms of business operation, Shanghai Paramount lost money for a long time due to internal and external factors. Between the imaginary Paramount and real Paramount, there exists a considerable gap,” scholar Ma Jun from Shanghai Academy of Social Sciences wrote in his essay named “Light and Shadow: Founding and Operation of Shanghai Paramount.” 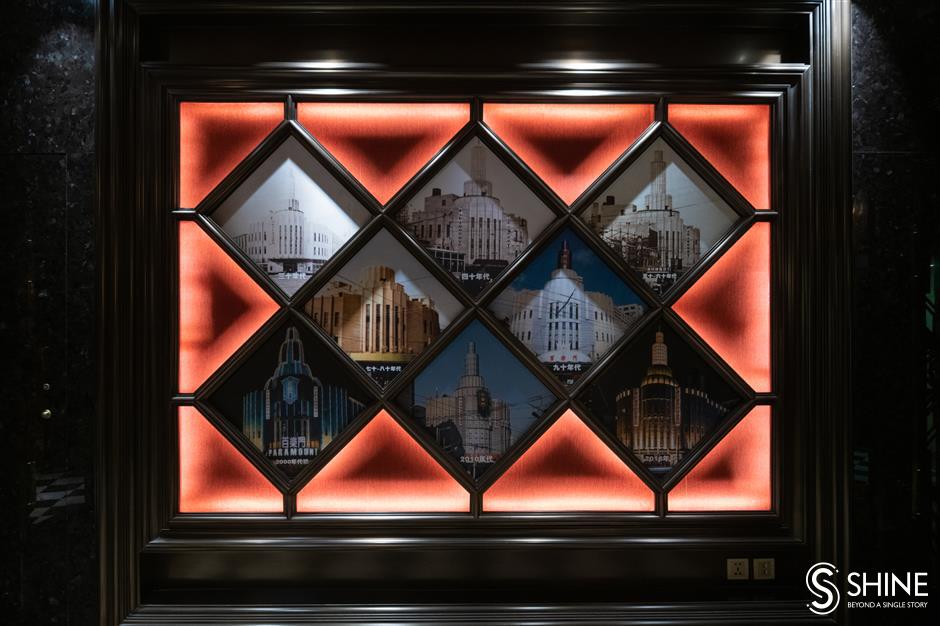 Photos of the Paramount Ballroom, which shows how it has changed with each renovation over the past 70 years.

In the spring of 2017, after a three-year lavish renovation, the ballroom threw open its doors to the public again for ultimate enjoyment of music and dance.

“Many of our guests, Chinese or expatriates, have some roots or a nostalgia link with old Shanghai,” said Chi Guorong, general manager of Shanghai Paramount Culture Entertainment Co Ltd. 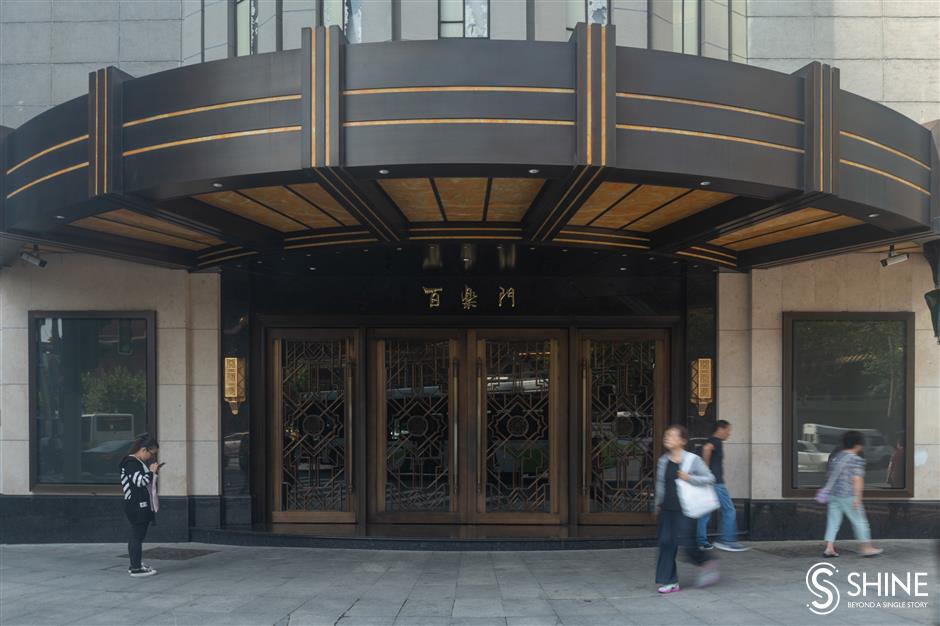 Recognized as the No. 1 music hall in the Far East, the Chinese name for the Paramount is “Bai Le Men,” literally meaning the gateway to 100 pleasures.

Arriving here today on the Empress of Japan will be Styrl Wilson and his new Paramount Ballroom Orchestra, direct from a long engagement at the Leeland Hotel, Detroit. The orchestra has been featured over the National Broadcasting Company.

Styrl Wilson and his music have made numerous recordings for the Victor Company during the past year. One of the most locally of these recordings was “My Blackbirds are Blue Birds now.”

The orchestra was booked to open the winter season at one of Chicago’s newest night clubs when the management of the Paramount offered them a contract to come here to open Shanghai’s luxurious new ballroom. With the decision resting between Chicago and Shanghai, the former didn’t have a chance, and here the boys are bringing with them the sort of smooth, danceable rhythms that will make the Paramount a mecca for those who really love to dance.

Among the Paramount artists arriving today is Mr Bromleigh House, possessor of a baritone voice that is said to be exceptionally smooth and rich. He has just completed an engagement at the Michigan Theater, Detroit. Another is Mr Billy Heads, whose sparkling humor and sensational dancing is expected to secure him a place in the hearts of pleasure-loving Shanghai.

Mr Heads has been featured by both Duke Ellington and Paul Ash. Persons who know good entertainers should appreciate this record as promising entertainment out of the ordinary. The Paramount will open early in December.