With the 21st China Shanghai International Arts Festival concluding this weekend, Shanghai art lovers are turning their attention to hints about next year’s program of events.

One that is piquing curiosity is a play by Robert Wilson, 78, US experimental theater stage director and playwright. He has given a bit of a sneak preview about the new drama, which will have its premiere at next year’s arts festival.

The native Texan’s work, commissioned by festival organizers, is entitled “The Impossible Black Tulip.” The name comes from an ancient map created in China.

In 1577, Jesuit missionary Matteo Ricci set out from Italy for his arduous journey to the East. He arrived in Macau in 1582 and eventually reached Beijing’s Forbidden City in 1601.

The map done in a European style was 1.52 meters high and 3.6 meters wide — a woodcut that put China at the center of the known world. Through Ricci’s input, it revealed the existence of the Americas to the Chinese.

Due to its rarity and exotic nature, the map was nicknamed “the impossible black tulip of cartography.” Only six original copies of the map have survived.

So how is this treasure of antiquity inspiring Wilson?

As one of the world’s foremost theater and visual artists, Wilson is known for integrating a wide variety of artistic forms, including dance, music, light, painting and sculpture, into his works. His description of the new work is as mysterious as its name.

“It’s a performance for eyes and ears,” he said. “It’s visual. It’s about organizing space. It’s for people of all ages, and it shall be understood internationally.”

Wilson said light has always been the very essential element for him in theater.

“My working style is a bit different,” he said. “I create a visual outline and then add music and other content. People always say the use of light has been special in my work, and that’s because I always start with the light.”

He added: “It’s an old story we are telling, but we have to deconstruct and reconstruct it. All great works are not limited to just one period of time. They are mythic, universal, and we need to rediscover them.” 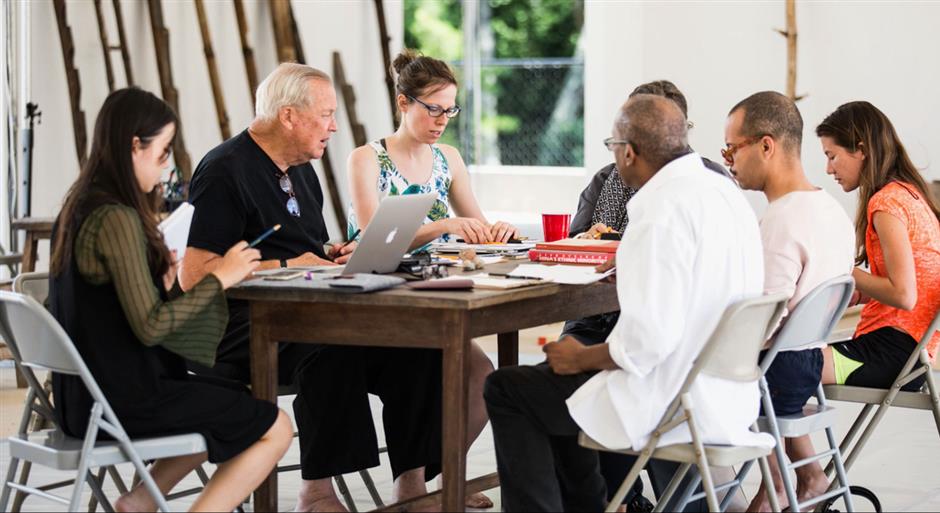 Robert Wilson (second left) and his colleagues discuss the new work during a workshop.

According to Wilson, ancient musical instruments will be featured in the work, along with contemporary music. He said the subject of the map, which represents cultural exchange between East and West, was actually proposed by festival organizers. He found the subject interesting and decided to accept the challenge.

“This will be a learning progress,” Wilson said. “I have never worked with Chinese partners before. I regard it an opportunity to work on something about a culture I know little about.”

Wilson and the Chinese creative team held their first workshop in June, where they discussed the script and selected some supporting performers. A second workshop was held earlier this month. The creators rehearsed on stage, and they tested music and light effects. A third workshop and formal rehearsal are scheduled in April.

“We hope the work will bear a strong Chinese identity but with an international vision,” said Wang Jun, director of China Shanghai International Arts Festival.

The project is being jointly developed by the festival, Milan’s Change Performing Arts, the Shanghai Dramatic Arts Center and Wilson’s Watermill Center. After its premiere at the Shanghai festival, the work will embark on a world tour.