Rare celadon from 42 museums on show 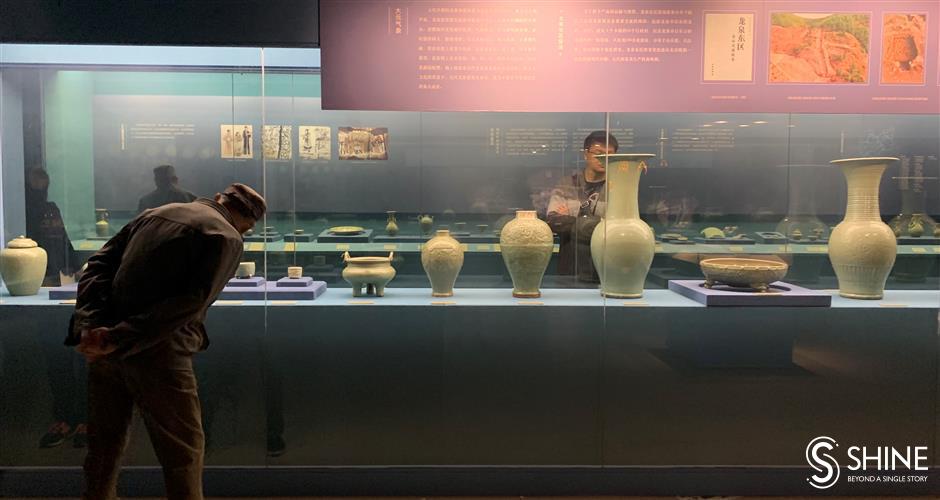 Visitors take a close look at the celadon exhibits at the Zhejiang Museum.

An exhibition of more than 500 ancient Longquan celadon pottery items is underway at the Zhejiang Museum’s Wulin Pavilion through February 16, 2020.

The exhibits come from 42 museums from home and abroad, giving visitors an insight into celadon’s origin, its development and the skills involved. This exhibition is one of the largest to feature Longquan celadon and also highlights the research cooperation between the local museum and the Palace Museum in Beijing.

“Zhejiang Museum initiated the Overseas Longquan Celadon Project in 2009. Since then we have researched its spreading path to other provinces and countries, unveiling the impact of the Longquan Kiln in ancient cultural exchanges,” said Shen Qionghua, director of the Zhejiang Museum’s porcelain department.

Celadon is a grayish-green glazed porcelain which originated from Zhejiang’s Longquan City. Craftsmen integrated the techniques of northern and southern China’s ceramic industries to develop multiple shades of green glaze.

With the development of the ancient Maritime Silk Road, which linked China to the West, celadon spread abroad and found favor with foreign customers from the 12th to the 15th century.

The exhibition includes treasures from the UK, Japan, South Korea, Iran, India and United Arab Emirates. A highlight is a bowl from Tokyo National Museum which is protected as a national-level antique.

The Mahuangpan bowl was fired in the Southern Song Dynasty (1127-1279) and is one of the most famous examples of ceramic making in the world.

A Japanese general donated a large quantity of gold to the Yuwangshan Temple in Hangzhou, then the capital of the dynasty, and a local monk gave him the bowl in return.

Three centuries later, the bowl was cracked at the bottom and handed down to another Japanese imperial official. In an effort to look for a similar bowl in China, he dispatched an ambassador to the then Ming Dynasty (1368-1644) court.

However, celadon styles had altered, and an alternative could not be found. Finally, a Chinese craftsman helped repair the bowl, inserting six nails at the bottom. 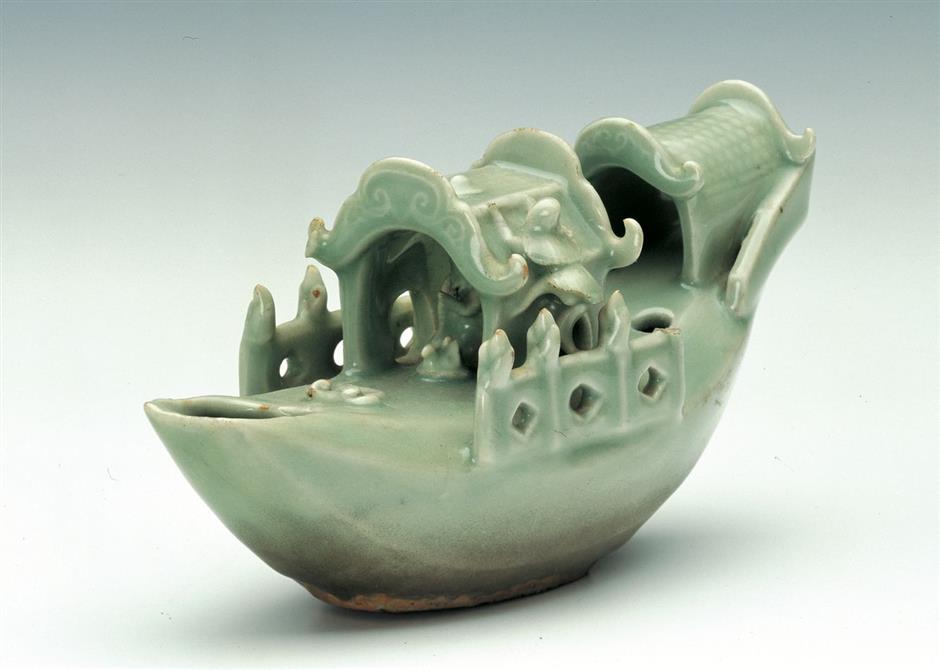 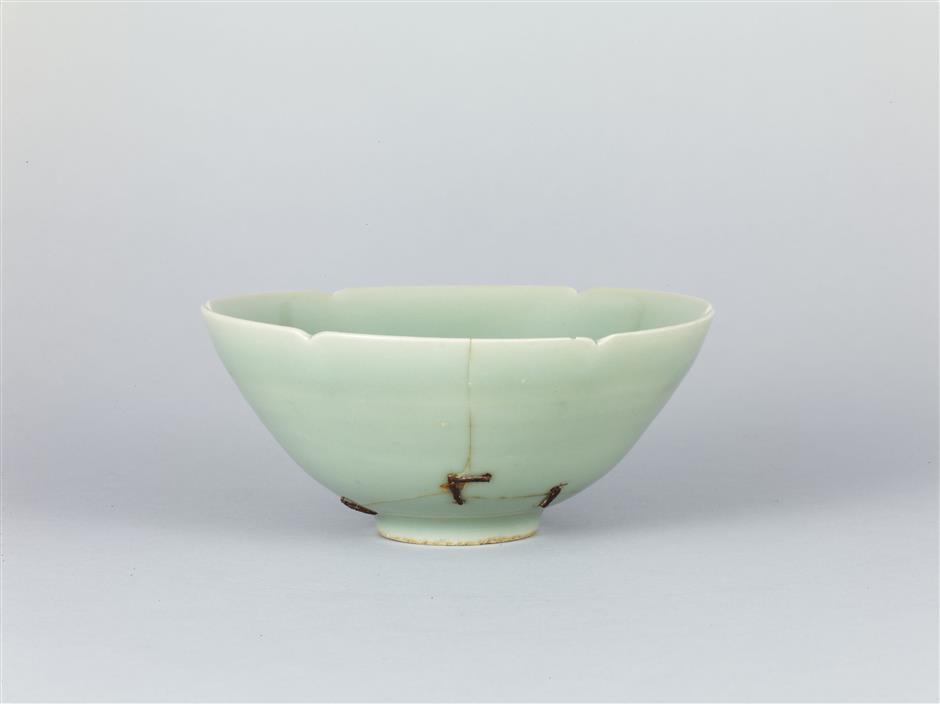 Another highlight is an exhibit from the Zhejiang Museum — a boat-shaped bottle used to add water to an ink stone when grinding an ink stick. It is believed to be the pinnacle of celadon technique by virtue of its unique design and superb firing skills.

The exhibition is in four sections. The first section reveals the origin, development and decline of celadon from the late Tang Dynasty (AD 618-907) to the Republic of China (1912-1949).

During the Five Dynasties and Ten Kingdoms period (AD 907-979), most celadon designs derived from bronze and lacquer vessels sharing similar shapes and motifs. By increasing the firing temperature, the glaze finish became smooth and clean.

In the Southern and Northern Dynasties (AD 420-581), techniques were largely boosted thanks to domestic cultural exchanges. More and more kilns spread over Longquan and the middle of Zhejiang Province. Their varied firing techniques enriched product varieties and formed a prosperous porcelain industry.

The exhibition displays a celadon in the shape of yucong, or cylindrical jadeware. It is the epitome of Liangzhu-style artifacts. The shape symbolizes the orbits of the sun and moon in the Liangzhu Culture.

Archeologists believe it had a religious meaning and used it as a ritual vessel in worshipping ceremonies. In the Southern Song Dynasty, such yucong-like vessels were used as wares in royal etiquette and worshipping ceremonies. Ceramic yucong testified the production of Longquan Kiln was under the administration and supervision of the royal court, which in return gave a boost to the development of Longquan porcelain.

The exhibition features a couple of exquisite celadon pieces in the second section, which highlights the ancient craftsmen’s wisdom and techniques.

The third section of the exhibition mainly displays celadon pieces excavated from ancient ports, shipwrecks and in other countries.

The Maritime Silk Road began to flourish between the 12th and 15th century, when long-distance trade of high-valued products, particularly silk, tea and porcelain, began to expand between Chinese and Western empires.

In order to meet the demand from the overseas market, the Longquan Kiln expanded its scale and integrated different firing techniques, which made it a giant in the world’s porcelain industry.

Taicang City in Jiangsu Province and Ningbo City in Zhejiang Province were vital ports in ancient times. Both domestic and foreign fleets set sail from there, transporting Oriental porcelain to other countries. Excavated celadon from the two cities are on display.

Some ships sank on their way to other continents, and numerous pieces have been recovered over the years. The exhibition also showcases celadon items salvaged from ancient South Korean ships.

In the last section, visitors can see how celadon influenced ceramic making and aesthetics in other countries, especially in Asia, including Vietnam, Thailand, Myanmar and Japan. 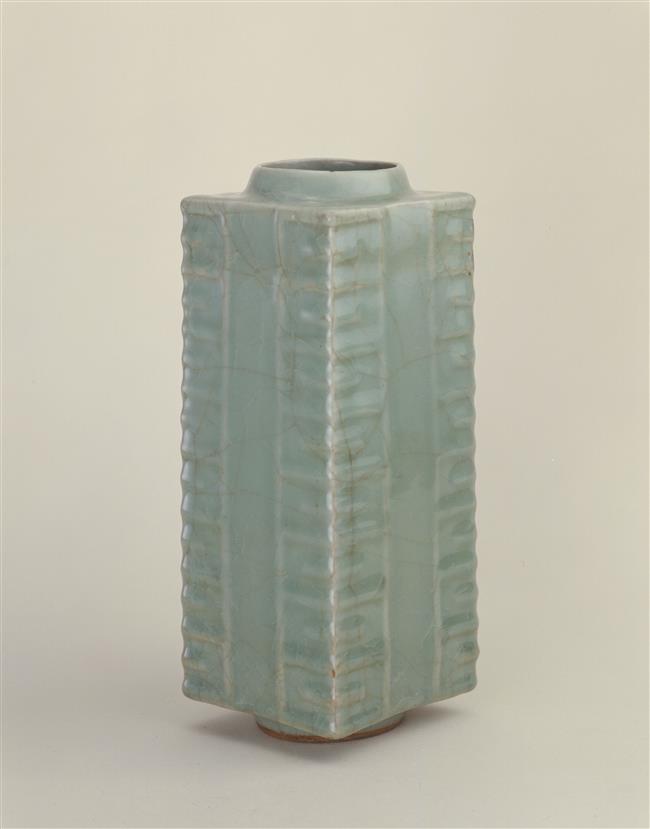 A celadon in the shape of yucong, or cylindrical jadeware 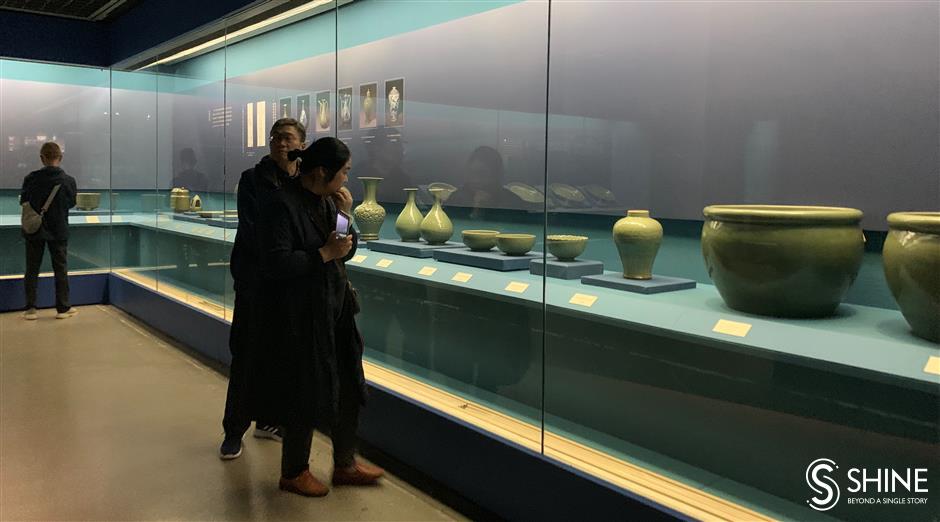 The pieces on show at Zhejiang Museum's Wulin Pavilion come from 42 museums at home and abroad.