Famous architect Laszlo Hudec has quite rightly attracted a wide amount of attention during the past decade. A prisoner of a World War I Russian camp, Hudec heroically escaped the bitter Siberian winter of 1918 to the safe haven of Harbin, while working on the Trans-Siberian Railroad. He later became a star in Shanghai when the metropolis was a paradise for architects in the early 20th century. But he was not the only European architect who drew fame at that time.

A book launch, held on the open terrace of the Bank of East Asia at 299 Sichuan Road M., celebrated another Hungarian architect, Karoly Gonda. The book reveals Gonda’s life and career more than mirrored Hudec in many ways. 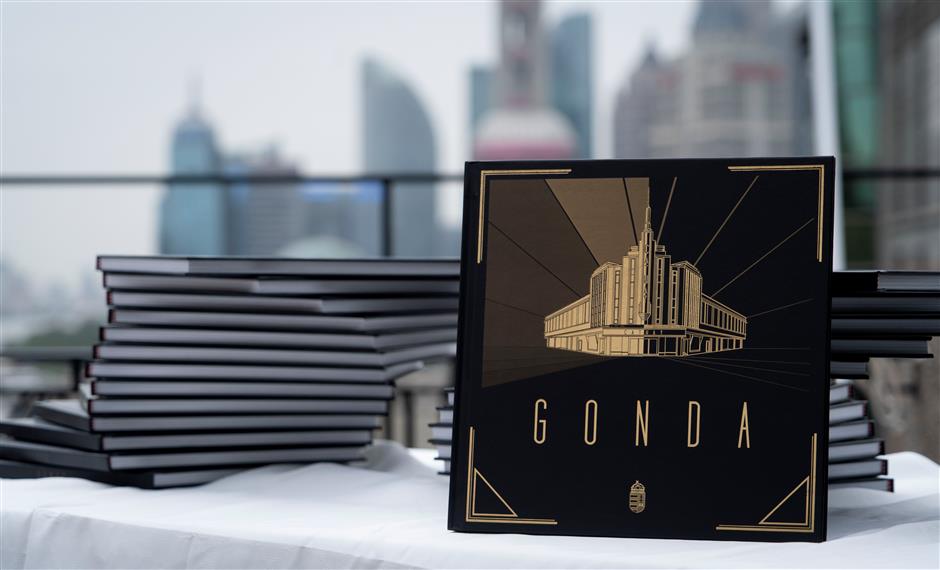 The “Gonda” book reveals his life and career in the 20th century Shanghai.

Renowned for his pursuit of an ultramodern style, Gonda left a galaxy of signature works in Shanghai, including several buildings sprinkled along the Nanjing Road.

“Numerous Hungarian business people, artists and adventurers arrived with plans for self-fulfillment in this bustling Asian metropolis at the end of the 19th and beginning of the 20th centuries, or just sought prosperity in the ‘Paris of the Orient’ while fleeing from the horrors of war.

“In 2018, thanks to the attentiveness of Chinese researchers, we discovered evidence of an as-yet unknown Hungarian architect,” said Szilard Bolla, Consul General of Hungary in Shanghai at the book launch.

“The identity of Charles Henry Gonda was clarified with the aid of the National Archives of Hungary and Hungarian Archival Delegation at the Austrian State Archive, and thanks to the Internet, we came upon the descendant of the architect’s adopted son, who shared with us his father’s memoirs.”

Titled “Gonda, Shanghai’s Ultramodern Hungarian Architect,” the book is made by the Consulate General of Hungary in Shanghai in cooperation with the Association of Hungarian Architects. According to commissioned art historian Eszter Baldavári, Karoly Gonda was born to a Jewish family in Gyongyos on June 22, 1889, whose father was a merchant. 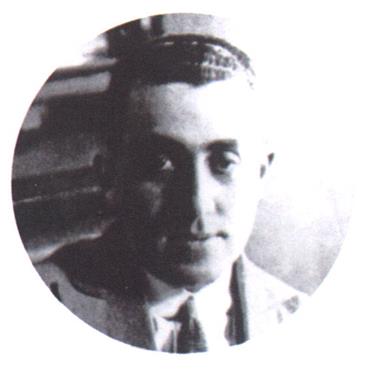 After his father died, Gonda moved to Vienna with his family and studied at the Technical College of Vienna’s school of architecture.

He made his way to Paris, where he likely received a diploma from the renowned Ecole des Beaux-Arts, and later worked in London.

When World War I broke out, Gonda was drafted, awarded a silver medal for valor, captured and sent to a Siberian prisoner of war camp, just like Hudec and so many soldiers in the Austro-Hungarian army.

During this time, he met Evdokia Nikolayevna Dmitrieff, daughter of a renowned Russian architect. The divorced mother hired Gonda, a prisoner who could speak Hungarian, German, English, French, and Russian, to teach her two sons.

Gonda and Evdokia soon fell in love and got married in 1919. On September 15, 1920, the couple arrived in Shanghai, “the bustling Asian metropolis that was drawing business people, architects, and adventurers like a magnet” for a new chapter of life.

In the 1920s and 1930s, the first major wave of urban development took place after Shanghai opened its port.

Both Gonda and Hudec came to the right city at the right time as Shanghai was embracing a “golden era” between the two world wars. Both architects had a similar career development in the bustling port city.

Hudec worked as a draftsman in an American architectural firm. He became a partner after only two years before opening his own firm in 1925.

Likewise, Gonda first worked at a British architectural firm, was quickly promoted and then went on to open his architectural firm in 1928. The family moved into a magnificent house with a lush garden, tennis court and several servants on today’s Xikang Road in Jing’an District.

Specializing in commercial buildings, Gonda’s office was located in one of his signature works, the Capitol Building on today’s Huqiu Road, an eight-story Art Deco building, housing a modern, comfortable theater, offices and apartments. 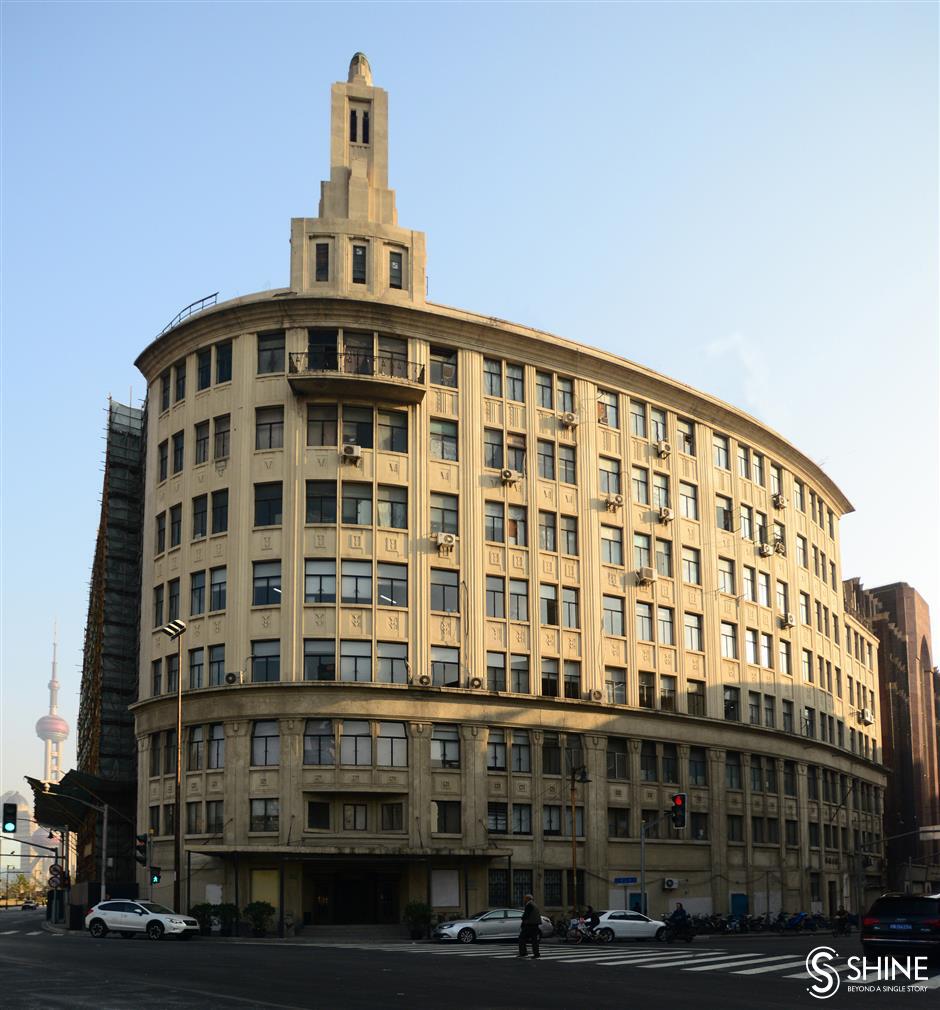 The Capitol Building on today’s Huqiu Road, where Gonda set up his own architectural firm in 1928.

“While researching Karoly Gonda’s career, a clearer image slowly emerged of an architect that played a key role in the development of the historic appearance of Shanghai, including his career path, the exciting turns in his life and the significance of this artist dedicated to the Art Deco style,” said Andras Krizsan, president of the Association of Hungarian Architects, who came to Shanghai for the book launch.

“His ultra-modern high-rises, movie theaters, and commercial and financial buildings attest that the creator of these works is justifiably highly respected in 20th century Chinese modern architectural history, not only on a domestic level, but also internationally.”

To create this utterly modern building, Gonda abandoned the classical architectural style borrowed from a bygone period without hesitation. The building was characterized by dense vertical articulation and an expressionist corner tower, which Gonda used in his later masterpiece, the Cathay Theatre on Huaihai Road.

“It seemed that Gonda had never belonged to the classic school,” said professor Wu Jiang from Tongji University. “His earlier work Sun Sun Co. Ltd (1926) on Nanjing Road shows a classic silhouette but lacks classic details. Everything is simple-cut with little decoration. His later works, both the Bank of East Asia and the Capitol Buildings followed the style.” 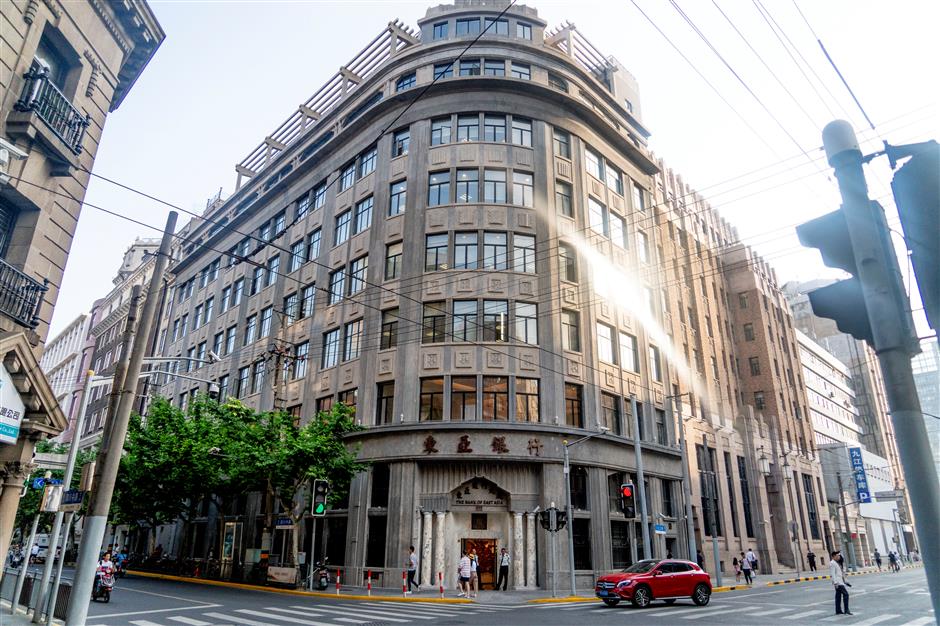 The Bank of East Asia, built in 1926, is a typical Art Deco building designed by Karoly Gonda. The renovated building reopened its doors in 2018 and now provides a home for the Shanghai and Hong Kong Bank History Museum.

Italian architectural historian Luca Poncellini named Gonda as one of “the protagonists that contributed to build a modern Shanghai,” along with his compatriot, Park Hotel designer Hudec.

In his book “Laszlo Hudec,” Poncellini wrote that Gonda expounded modern architectural manifesto under pen name “ADNOG” in an article in Shanghai Sunday Times in 1929, which said, “No one ever asked his motor car dealer for a motor car in Italian Renaissance style, the request for residences in that style are frequent… And people of our modern age do not think how utterly ridiculous it is to see the lady of the house in her drawing room Louis XIV, with shingled hair, boyish figure and short skirt, shaking a cocktail for a sun-burned, athletic gentleman in plus-fours and a tweed jacket over a checkered pullover.”

The statement that mirrored opinions of French modern architecture pioneer Le Corbsier was written just one year after the Capitol Building was launched in February of 1928 in the North Bund area.

Gonda also designed building No. 14 on the Bund, which was the youngest, most simple-cut one among the 23 waterfront buildings along the Bund. It was completed in October 1948 as the new office for the Bank of Communications. 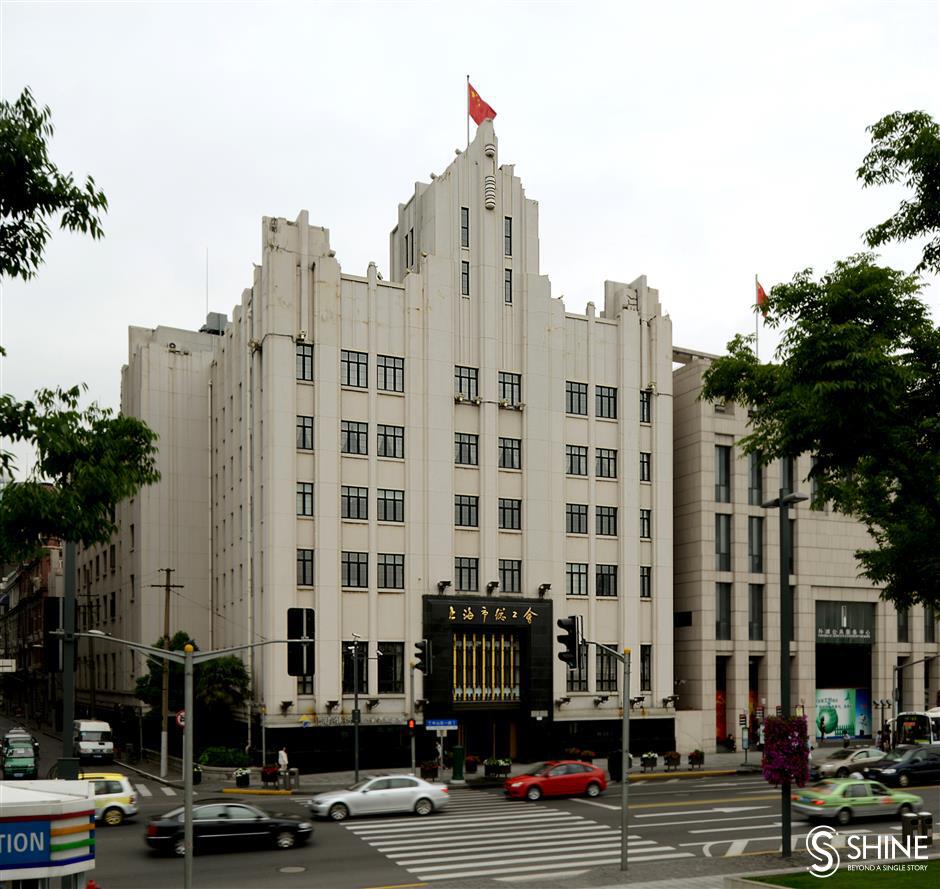 No. 14 on Zhongshan E1 Road is the last building to be constructed on the Bund before 1949.

Gonda designed the building in 1937 which unfortunately coincided with the war against the Japanese invaders and thus the construction was postponed until the war was over. The Allied Architects, a famous Chinese architectural firm, revised the original design and finished the construction in 1948.

It’s also a typical Art Deco building with a lot of vertical lines. The facade is symmetrical with its top shaped like a small tower. The external walls are covered by cement. Black marbles are widely used at the entrance hall and the ground floor.

The interior of No.14, here and there, is also a reminder to some of Hudec’s works.

In the entrance hall, two short staircases with copper handrails are arranged in artistic curves. The grand hall on the second floor is more amazing. The nearly 20 tall, square-shaped columns give a feel of a sacred Greek temple with a modern touch. Yellow and black terrazzo are lavishly used to adorn the floor and walls. The architect’s smart use of the simple material has created a strong geometrical effect and demonstrates the Art Deco identity of No. 14.

“We have been very familiar with architect Laszlo Hudec, who was so famous in Shanghai. We also know about Gonda, but there has never been a book that introduces his works systematically. There were not many buildings designed by Gonda in Shanghai, but each one demonstrated his pursuit of modernity and his adept use of the Art Deco style,” Cao Jiaming, chairman of the Architectural Society of Shanghai, said at the book launch.

“Since early last century, many overseas architects left new works in the city which continued to attract famous architects around the world to come after the opening-up policy in 1978 to design new buildings. This phenomenon showed unique Shanghai culture which is open-up and East-meet-West.”

Shanghai Workers’ Union took the Art Deco building at Bund No. 14 as its headquarter office in 1951 and  still uses it today.

The building was the last stroke on the iconic waterfront of the Bund. When this Gonda work was completed in 1948, the Bund that we see today finally took its shape.

In the autumn of 1920, young Hungarian architect Karoly Gonda first cast his eyes upon the Bund.

“He had no inkling that one day, one of his buildings would grace this storied avenue. He was just a young man looking to start a new life and build a future in a city that was hurtling headlong into modernity,” as is written in the preface of the book. 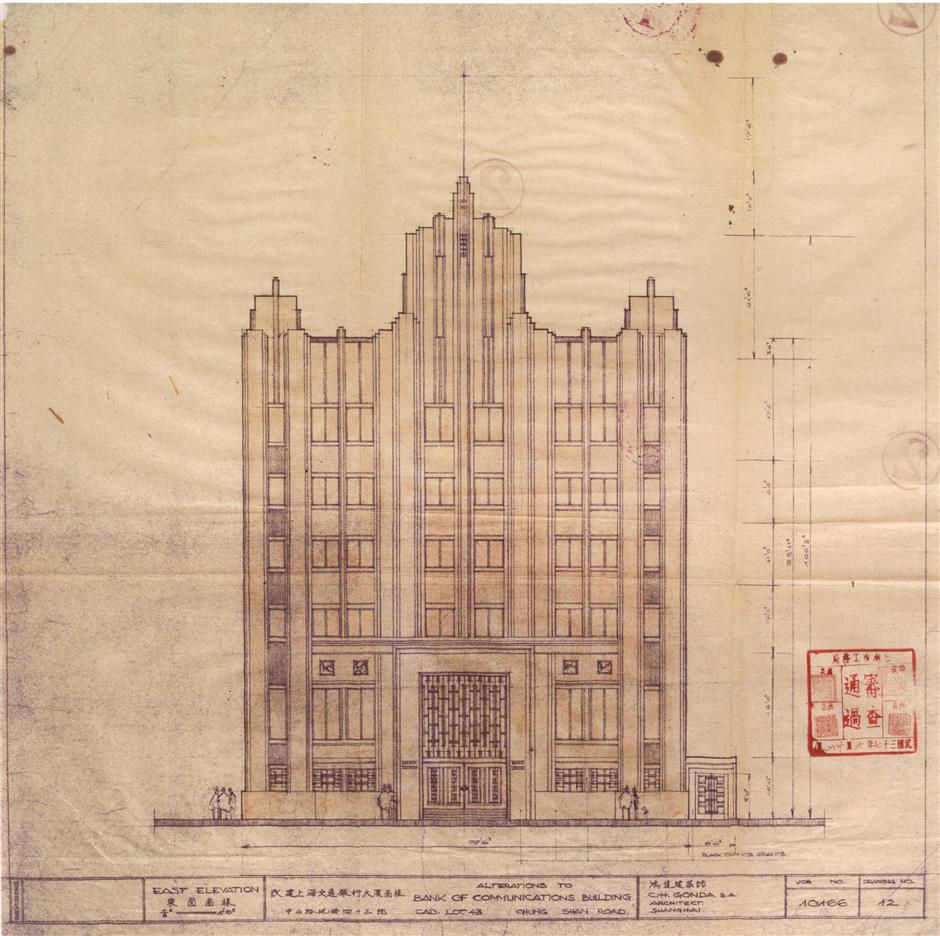