The pronunciation of the famed Russian conductor’s surname sounds similar to jiefu — brother-in-law in Chinese — which therefore became his nickname among the Chinese fans.

One of Gergiev’s signature images is when he conducts with a toothpick in hand instead of a traditional baton.

“It absolutely doesn’t matter what I have in hand,” Gergiev said in an interview ahead of his Shanghai concert. “What matters is what a conductor has in his eyes, mind and heart.”

At Thursday’s Shanghai Oriental Art Center, Gergiev conducted mostly with a 15-centimeter “giant toothpick,” and sometimes simply used his hands and fingers. The programs included Debussy’s “Prelude to the Afternoon of a Faun,” Mendelssohn’s Symphony No. 4 in A major, Op. 90, which were followed by Shostakovich’s Symphony No. 5 in D minor, Op. 47.

“The varied programs covered most of what a symphony orchestra is capable of presenting to the audience. Therefore, I’m excited by just thinking about what we are going to perform,” said Gergiev.

It was the first time that the Russian presented Shostakovich’s work in Shanghai. It was also a rare chance for a Shanghai audience to listen to Gergiev’s interpretation of non-Russian composers’ works. 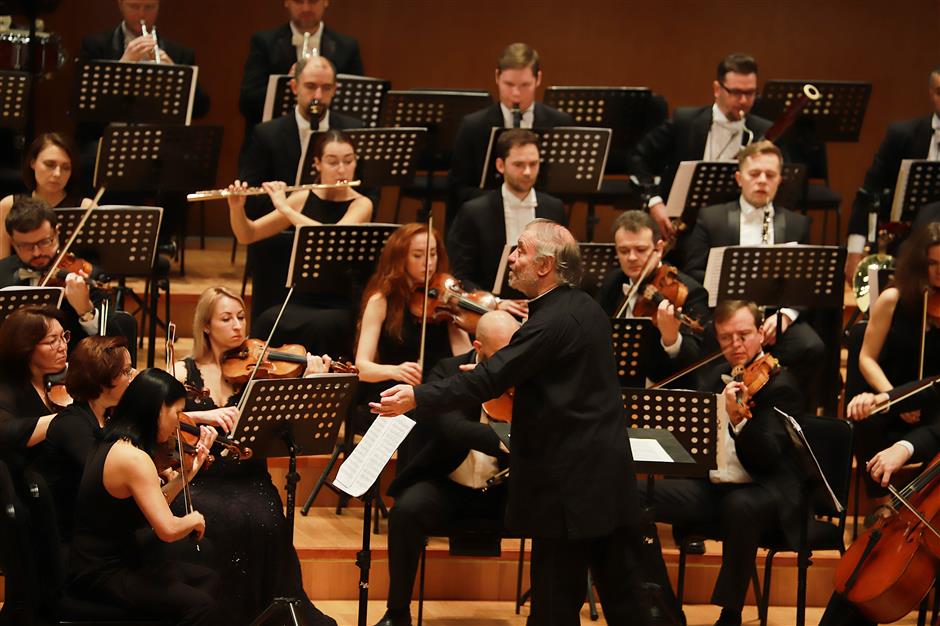 The 66-year-old was born into an eventful Soviet society era when everyone was longing for a peaceful life.

“I didn’t choose music, but was discovered by a classical music teacher,” said Gergiev. “He paid several visits to my family suggesting that I should step into music. My father passed away early due to war injuries when I was a teenager. My mother was a diligent woman and supported my decision of becoming a musician.”

Gergiev was a student of the legendary conductor-maker Ilya Musin, and then became a vivid representative of the St Petersburg conducting school.

When studying at the Leningrad Conservatory, he won the Herbert von Karajan Competition in Berlin and the All-Union Conducting Competition in Moscow before he was invited to join the Kirov Theatre (now the Mariinsky) as an assistant to the principal conductor.

In 1998, he was appointed music director of the Mariinsky Theatre and became its artistic and general manager in 1996, leading the orchestra, opera and ballet companies.

The Mariinsky Orchestra is one of the oldest musical ensembles in Russia, the history of which can be traced back to the early 18th century. Gergiev’s arrival at the helm rapidly expanded the orchestra’s repertoire, which now includes every symphony by Beethoven, Mahler, Prokofiev and Shostakovich; requiems by Mozart, Berlioz, Verdi, Brahms and Tishchenko; as well as various works by modern composers.

“If I have to lead the orchestra at a huge open space like the Forbidden City, maybe I’ll choose to use a baton, and probably a white baton to make it easy to be seen,” Gergiev said on the baton topic.

“But if it’s a concert hall, a conductor communicates with the orchestra with his eyes and gestures, not with a stick.”

Gergiev revealed that he had once tried using chopstick as baton at a concert in New York.

“I was dining with my friends in a Japanese restaurant in New York when one of them pointed at a pair of chopsticks, asking me if I was able to use that to conduct. I stole one chopstick when we left the restaurant. Later in the performance, knowing my friend was sitting in one of the VIP boxes, I took the chopstick out of my pocket in the middle of the concert and deliberately gave my friend a look. He almost fainted in his box.”

The playful character doesn’t take away Gergiev’s strictness and high standard to himself.

“If an orchestra member gets bored three minutes into a rehearsal, then it’s the conductor’s problem,” said Gergiev. “I have learned that from my teachers, learned from my observation. If something goes wrong, that’s the conductor’s responsibility.”

Gergiev said full concentration is the top quality he values from a great conductor, which is also his career motto.

“A conductor has to be familiar with each note of a symphony, even upside down. It gives one confidence and generates great performance.”

The most outstanding quality in Mariinsky the perfectionist wants to inherit is its balance in all kinds of music.

“Mariinsky presents top opera, ballet and symphony music, which are always in harmony. We never dropped or left any music behind. Moreover, Mariinsky keeps preparing the younger generation of artists and audience.”

As China’s “brother-in-law,” Gergiev keeps fresh memories of his early visits to China.

“In the past 20 years, I have visited over 10 Chinese cities, including Tianjin, Guangzhou, Nanjing, Hangzhou, Xi’an. China has kept surprising me in the past two decades, and it still does. I’m informed that Shanghai is building another new opera house. This is a very dynamic process, a place filled with future for young artists.”