For almost two centuries, Russian ballet has won acclaim for its captivating manifestation of how the body can express human essence, from emotion to the soul.

So when four top Russian ballet companies sent their principal dancers and soloists to Shanghai for the only China stop on a world tour, it was an event not to be missed by ballet fans. 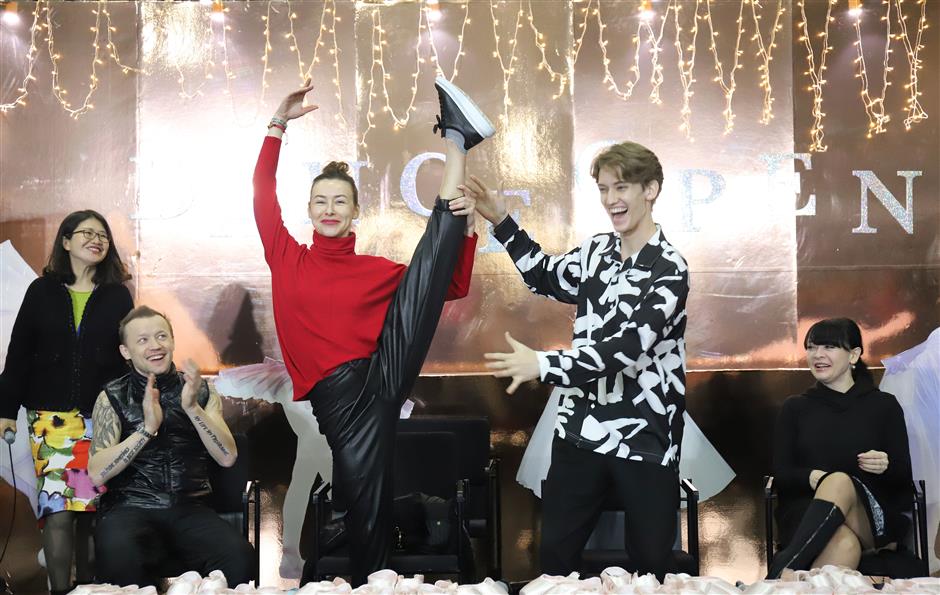 Bolshoi Theatre lead soloist Kristina Kretova and American Julian MacKay, who together performed in dance from the ballet "Bluebeard," ham it up a bit for Shanghai fans.

“The programs are balanced to demonstrate all aspects of the choreographic art,” said Irina Polushina, an official of the St Petersburg Dance Open International Ballet Festival.

Shanghai and St Petersburg are “sister cities,” and the performance here cemented the deep bond both share in the cultural arts.

American ballet star Julian MacKay was undoubtedly a popular name on the list of performers. Born in Montana, he trained at the Moscow State Ballet Academy for six years, graduating at the top of his class in 2015. He danced the role of Siegfried in the full-length “Swan Lake” with the Russian State Ballet on tour in Germany. In 2016, he joined the Mikhailovsky Ballet Co.

“‘Bluebeard’ is a new work, a difficult one,” said MacKay. “But I enjoy performing it because it spreads the spirit of freedom and joyfulness.” 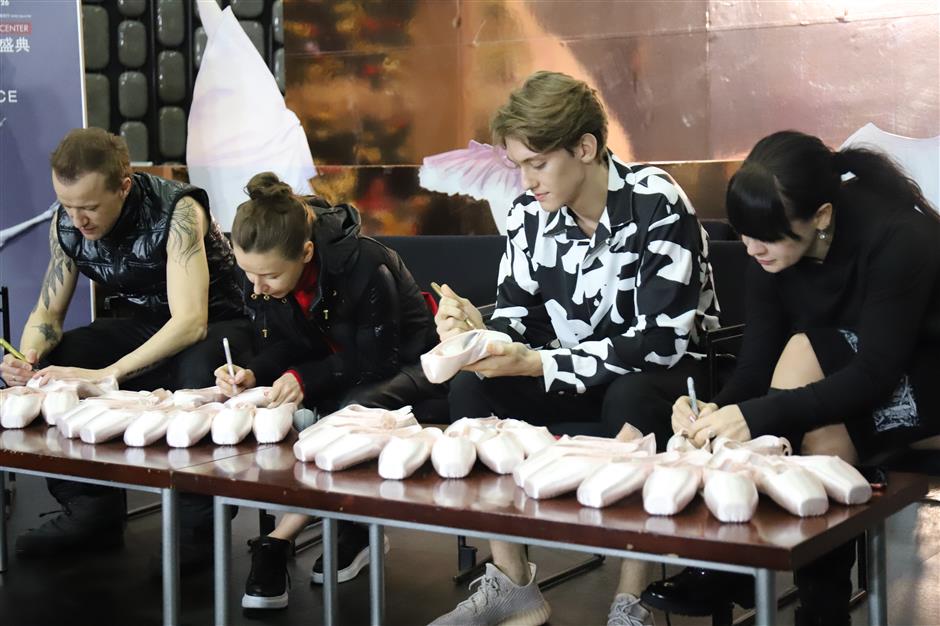 Dancers from the "Gala of St Petersburg Ballet Stars" sign autographs on ballet shoes, which were sold at a charity bazaar at the Shanghai Oriental Art Center. The money raised goes to support young ballet learners.

Blessed with the kind of looks and physique that could have led him to a career in acting or modeling, the 22-year-old MacKay is fully devoted to ballet and to a desire to achieve even greater feats in dance.

“I will still focus on ballet dance, which distinguishes me from others,” he said. “When I made up my mind to study ballet, my parents supported my wish to go to Russia. It was an obvious choice for classical ballet. Indeed, I was taught not only about dancing, but about all qualities of a stage performer.”

MacKay had to conquer the language barrier and endure the rigorous training regime at a school he describes as a “remolding camp.”

“Ballet is a complicated art,” he said. “There is no other way but to be devoted and keep training hard.”

For MacKay’s “Bluebeard” partner Kretova, it’s a very similar story. There are no shortcuts to becoming a top ballet dancer.

“I came from a small Russian city where there were no theaters,” said Kretova. “My family did everything possible to support my interest in ballet. My first ballet school had limited facilities, and we had to train to the accompaniment of an accordion. I worked very hard and managed to enter a professional ballet school later.”

She added: “My parents were of the opinion that a child should be fully supported when showing a serious interest in something, even if he or she doesn’t have exceptional talent. Only when you have a strong love and passion toward something, can you master it.”

The dancers’ thoughts were echoed by Polushina.

“St Petersburg is the cradle of ballet,” she said. “A diploma from the Vaganova Academy of Russian Ballet is a ‘golden key’ that opens the doors to any ballet company for a dancer. Nevertheless, to become a real star, one cannot stop at obtaining a diploma. Ballet is an art that requires hard, daily work, without self-indulgence or pauses. That is the secret of how Russian ballet’s status has been built.”