Romanian-born conductor Ion Marin recently brought a unique repertoire to Shanghai, featuring Stravinsky’s “The Firebird” in its original entirety, and matched it with a contemporary piece by Chinese-American composer Zhou Tian and Franz Liszt’s Piano Concerto No. 1.

The 59-year-old conductor was offered a few pieces by the young composer, who is this season’s resident artist at Shanghai Symphony Orchestra. Marin found “Trace” a great match for the program’s center piece “The Firebird.”

The contemporary piece was inspired by Zhou’s experience in Chinese cities like his Hangzhou hometown where, due to the speedy grand scale of industrialization, the past is rapidly disappearing.

Zhou previously said in interviews that he is “empowered by tradition, from medieval chants and Chinese folk music to Brahms and Stravinsky.” Such influences are musically clear to the maestro’s ear.

“There are a lot of Stravinsky inspirations in ‘Trace,’ especially in terms of rhythms, and also the idea of taking folklore tales and sounds and expanding them into symphonic music,” Marin told Shanghai Daily just before the concert. 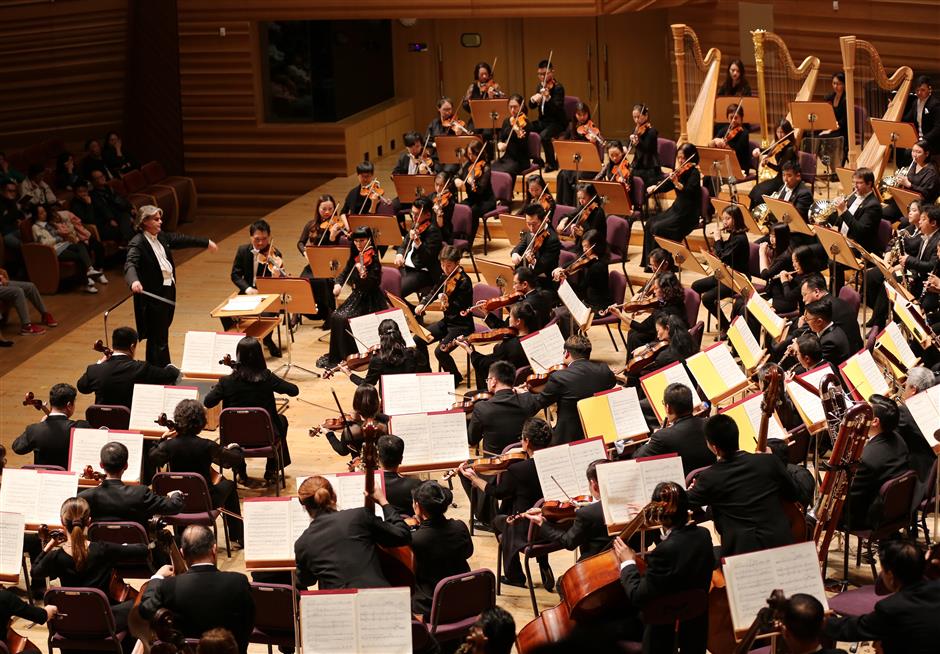 The Romanian maestro, who has conducted top symphony and opera orchestras such as the Berliner Philharmoniker and Vienna State Opera, is one of the few noted for world-class performances in both music domains.

“It is very important for opera orchestras to have symphonic concerts so that they familiarize with symphonic repertories,” he said.

“At the same time, it is very important for symphonic orchestras, from time to time, to do opera or ballet in concert forms, because it brings singing as an instrument in addition to other musical instruments, which brings more flexibility. And a level of concentration can be reached by enlarging the artistic approach. It’s not about the forms, it’s about the artistic approach.”

Such focus on enlarging the artistic approach may explain why he prefers masterpieces, particularly operas, in their entirety rather than in modernized or experimental forms or excerpts of its most famous songs.

“The Firebird” was originally composed as grand symphonic poems, which later became the first of three hugely successful ballets, and a collaboration between the composer and Ballets Russes founder Sergei Diaghilev, followed by “Petrushka” and “The Rite of Spring.”

“The Firebird” draws on a Russian tale and follows the journey of Prince Ivan, who has fallen into the magical realm of Koschei the Immortal on a hunting journey. Ivan kills Koschei with help from the Firebird, who owed the prince a favor when he captured her and spared her life.

For Marin, it is a pity that masterpieces like this are now often only played in shortened versions or excerpts, as opera houses and symphony orchestras fear the pieces might be too old-school for the younger generation.

“Sometimes in operas, we are asked to do cuts. In a way it’s like a trailer, which can be very useful in popularizing the pieces, but generally, I don’t believe in excerpts. I’m reluctant to make such cuts,” he said.

“It’s not about whether it is original, but about appreciating the composer’s complete vision, otherwise you miss the whole point.”

The conductor’s dissatisfaction led him to make two analogies: Eating only the cherry off a wonderfully large cake or taking a helicopter to the tip of Mount Qomolangma, or Mount Everest, without the experience of climbing from the bottom.

In a similar way, he is often suspicious of experiments with classical operas when they are put in a contemporary context.

“I agree that opera stories are not exactly exciting like Hollywood movies, but if they were good enough to inspire the composer to write such beautiful music, let’s respect the entirety,” he said.

“I’m OK with making some modifications moving the scenes around, to the singing or the songs, but not with misplacing the piece completely.”

Such strong views not only come from his confidence for the excellence of original pieces, but also his confidence in the younger generation, which he considers largely underestimated and wrongly represented, especially in Europe.

“In Europe, there is a lot of populism going on where some people speak in the name of the young generation, by saying this or that will draw more young people,” he said.

“I think such declarations are often distortions of reality. It’s quite sad that many European opera houses are listening to such distortions.”

Marin added that he is not against applying technology to some experiments, but it should not be technology only, as if the younger generation is only about and only attracted by technology.

Similarly, the music maestro isn’t against more modern forms of classic pieces, but insists there should always be a place for the original form.

He takes museums as an analogy, adding that it would be unthinkable for all museums in the world to consider Raphael too old-fashioned and only take contemporary art pieces.

“In the same way, if we continue with only modernizing, the younger generation would never know how operas directed by Franco Zeffirelli or Luchino Visconti were like,” he said.

“Music cannot be taken away from the cultural context. And culture is a thing that has a lot to do with tradition. We have to know where we are coming from, who we are, and what our responsibility is to give to the future generation. This educational process is vital to the younger generation.”

What impressed Marin on his trips to China is the curriculum in music conservatories he visited, which includes courses on culture and literature, in addition to learning about music and musical instruments.

His passion and strong opinion for education is not only in the words, but also in deeds through Cantu’s Mundi (Song of the Earth), a musical education program he created in home country Romania in 2012. It has since expanded not only nationwide, but also to overseas Romanian communities in Italy.

“I firmly believe that musical language is not only international or universal, but also goes through all the social classes in the society. Music is the same for the poor, the rich, handicapped and so on,” he said of the program.

“It is not just about music education in Romania, but to transform music into a tool for social integration in our society.”

By bringing children from different communities and social classes, who rarely get the chance to meet each other or to sing in the same choir, he has seen the program inspire them to strengthen such connections, which will help with the integration of people from different classes and conditions of society, without social discrimination.

“The experience has been absolutely rewarding for me,” he said.

“If more people on Earth use musical language, the world will be a much more evolved place in terms of peace, understanding and acceptance of other people’s reality. We have to accept the reality of others, and be able to live in harmony with that.”