A concert featuring Chinese piano classics was held at Shanghai Symphony Hall on Wednesday night to mark the 92nd anniversary of the establishment of Shanghai Conservatory of Music.

The four pianists performing at the concert, entitled “Keeping the Sparks of SCM,” were all graduates of the conservatory or its affiliated school. All pieces performed were original works by composers who currently or used to teach at the conservatory.

“To demonstrate our teachers’ works in such an occasion is like passing on a torch,” said pianist Jiang Chen, who is currently the dean of the conservatory’s piano department. Jiang used to be the student of composer and pianist Wang Jianzhong. Wang taught at both the conservatory and its affiliated school.

“I still remember knocking on Mr Wang’s door with the score of his ‘Sonatina’ in my hand when I was a second-grade middle school student,” said Jiang. “I wanted Wang to teach me how to play the piece well. After so many years, I’m playing ‘Sonatina’ on a special occasion like this as a tribute to my teacher.” 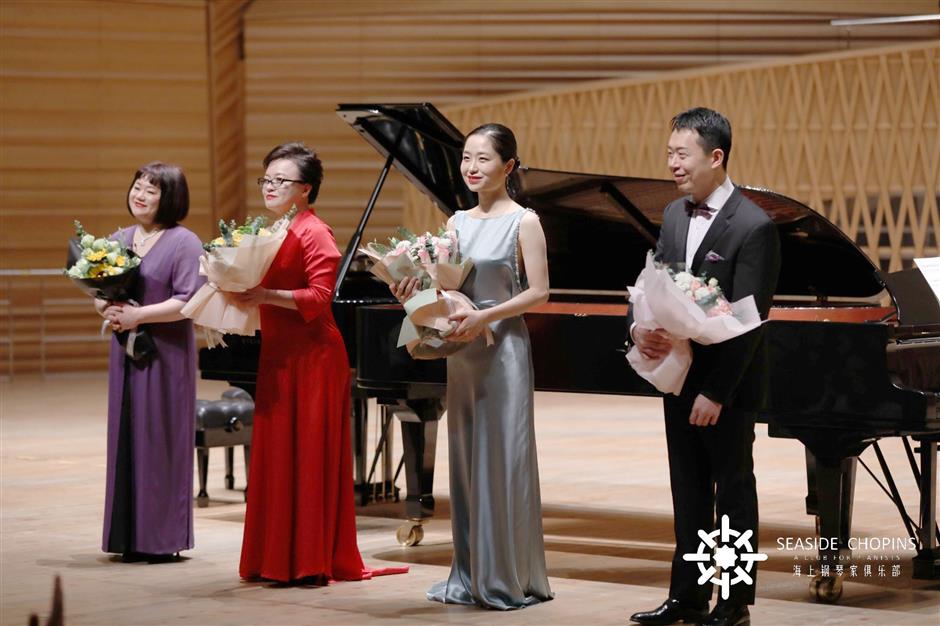 From left: Tang Jin, Jiang Chen, Zhu Haobing and Wang Lu — all graduates from the conservatory or its affiliated school

Another two performers, Wang Lu and Zhu Haobing, were both students of Wang Jianzhong’s.

“I started learning from Mr Wang when I was 9,” said Wang Lu, who later studied in The Juilliard School and The Peabody Institute. “Wang used to be a very strict teacher. He is keen on promoting Chinese original works and I still remember him encouraging me to perform the Chinese piece ‘Three Variations on the Plum’ at my graduation performance.”

“Three Variations on the Plum,” composed by Wang Jianzhong, was on Wang Lu’s performing list during Wednesday's concert.

Tang performed several works by composer Yang Liqing, who used to be the president of Shanghai Conservatory of Music.

“As a teacher, Yang opened a lot of windows for my life,” said Tang. “He talks not only about piano and music, but movies and philosophy too. He is more like a well-learned friend rather than the president of the conservatory.”

Tang said Yang encouraged her to go abroad for further studies given the limited resources in Chinese conservatories. But he also encouraged her to make a contribution to domestic music education after graduation. Tang is now an associate professor of the conservatory’s affiliated school.

“Chinese pianists’ techniques and performing skills have already reached a high level on the international stage,” Jiang said. “We are all calling for more quality works by Chinese composers. For the existing good works, we try to perform them as much as possible to introduce them to the world.” 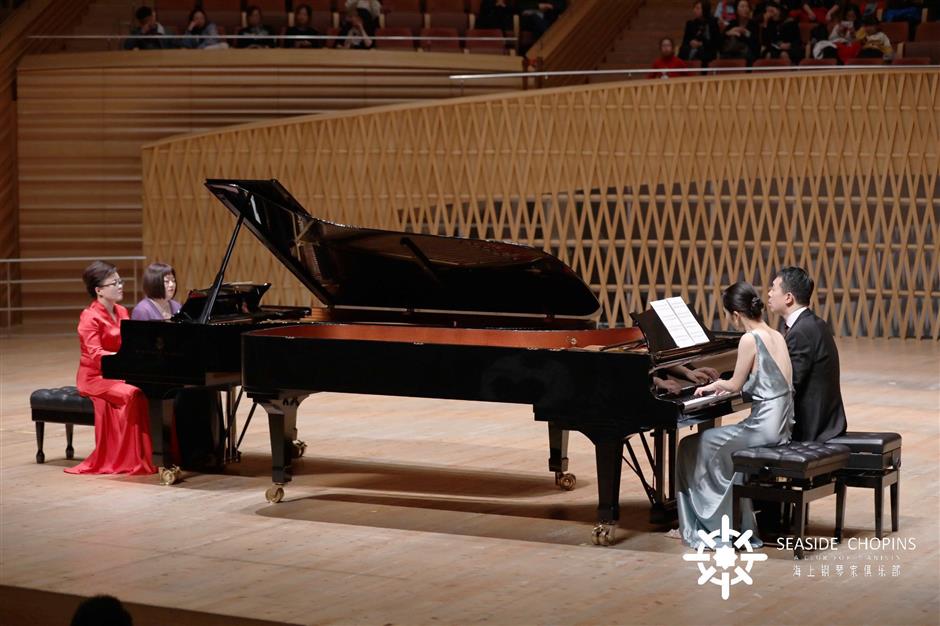 The four pianists perform the eight-hand song "Guerrilla" during the concert.