Feast your eyes on awesome skills of human hands 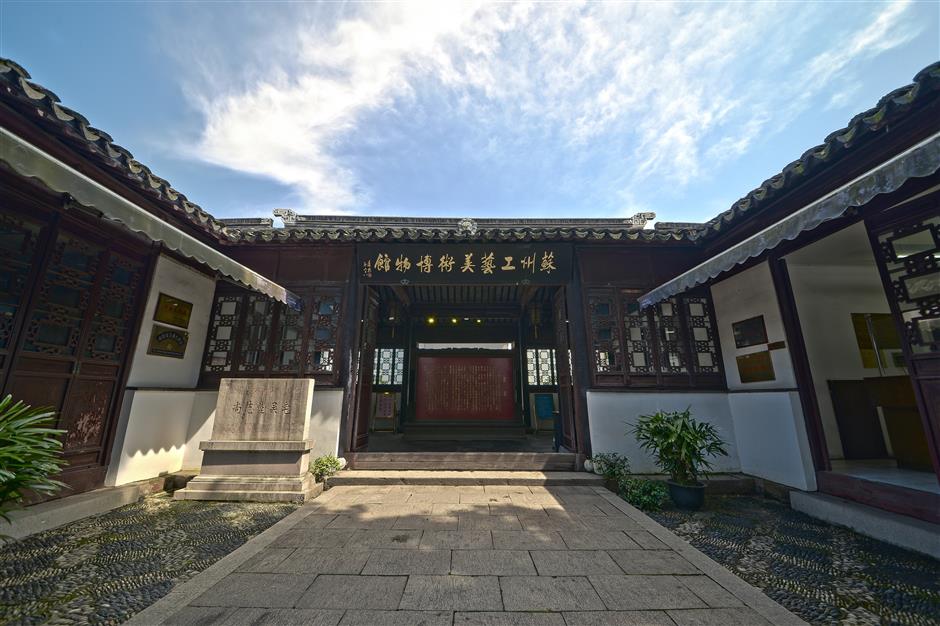 Suzhou Arts and Crafts Museum, tucked away in an old house in a small lane, is a showcase of the city’s spectacular handicrafts history.

Suzhou Arts and Crafts Museum, hidden in an old house with pleasant gardens in a small lane, is a showcase of the city’s spectacular handicrafts history, which has produced some of China’s best and most famous artworks.

From fans and carvings of ivory, wood and gemstones to furniture, jade statues and ceramics, the museum is a treasure trove for art lovers.

The ivory carving “A Hall of Buddha” is a large work made of a 2-meter-long African elephant tusk. Pure and smooth, the carving features more than 150 Buddha statues in varied postures and facial expressions, standing, sitting, lying or sleeping on a rosewood pedestal. It is engraved with auspicious clouds, suggesting the propitious Taoism omen “the purple air comes from the east.”

It took about three years for the craftsmen of the Suzhou Carving Factory to complete the work in the early 1980s.

“It’s done with very traditional Suzhou carving, which is known for its extreme meticulousness,” said Chang Zheng, a worker at the museum. “The ivory trade is banned in China today, so it might be one of only a few ivory carvings of such a large scale.”

As an emblem of purity, beauty, longevity and immortality, carved jade has been prized by the Chinese since ancient times, and Suzhou jade art craftsmanship is second to none in the carving of creative, complicated designs.

Master carver Yang Xi’s jade sculpture “A Life of Good Blessings” is a clever combination of ginseng (a homophone for the word “life” in Chinese) and the bat (which has the same pronunciation as “bless­ing”). The jade had a brownish flaw on the top, but Yang ingeniously took advantage of the blemish and engraved it into a vivid bat lying on light ginger-colored ginseng. 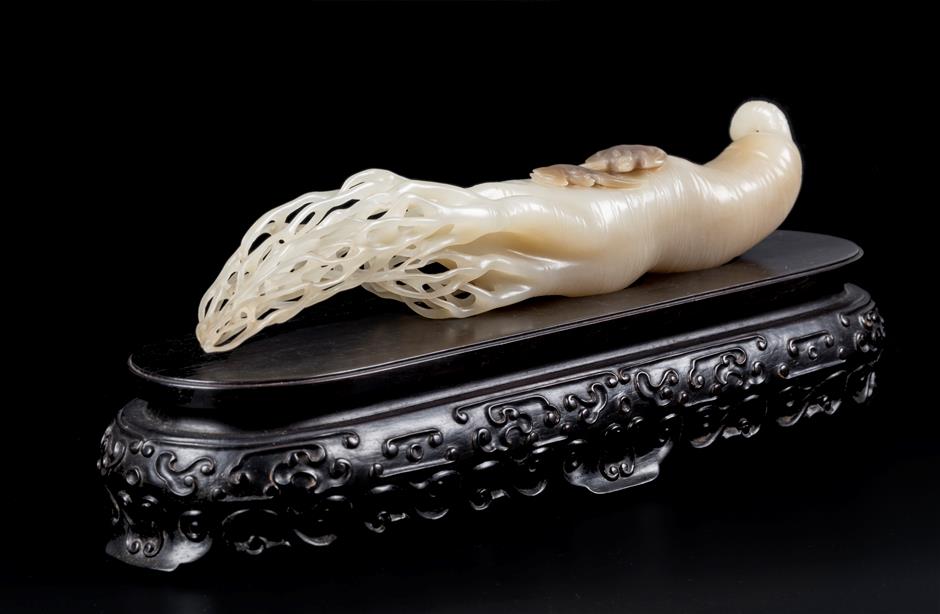 The white jade “Bowl for Noodles and Vegetables” is a spotless, smooth work finely polished to appear like fragile crystalline. Ancient Suzhou craftsmen hollowed out most of the original Hetian jade, which is produced in Xinjiang, leaving only the thin outermost layer to fashion the bowl.

“The hollowed-out part was thrown away because it was intended as a national gift at the time,” Chang explained. “In ancient China, Hetian jade was not considered to be a top material, though today it is as the resource diminishes.”

The “Suzhou Folding Fan,” 50 centimeters tall and 55 centimeters wide, is carved from a 1-ton Xiuyan jade produced in Liaoning Province. The fan features more than 2,000 handmade holes in the shape of begonias. The front side is engraved with a dragon pattern, while the back side is a phoenix, with a jade-carved pendant.

Another green jade bowl, also made of Hetian jade, stands out for its use of the time-consuming Hindustan technique — very thinly cut and often covered in a profusion of extremely fine relief floral designs.

The technique appeared and was carried forward in the Qing Dynasty (1644-1911), when jade objects were imported or received as gifts from India and Turkey.

“Look closely and you can even see the light coming through,” Chang said. “The thinnest membrane was controlled within 1 millimeter.”

In 1978, a Sarira Buddha shrine of Northern Song Dynasty (960-1127) was unearthed from the Suzhou Ruiguang Pagoda. A year later, Suzhou master carpenters made two replicas of the wooden pagoda, and one ended up in the museum collection. As one of China’s 10 Buddha shrines, the artwork has been prohibited from going to overseas exhibitions.

“Even the replica is a masterpiece,” Chang said.

In a same-size ratio, the pagoda is made of old sandalwood incorporating more than 20 different skills, such as wood, jade and crystal carving and an ancient method of colored drawing. The central dragon is sculpted with delicate filigree casing, and the whole pagoda is decorated with more than 30,000 pearls. 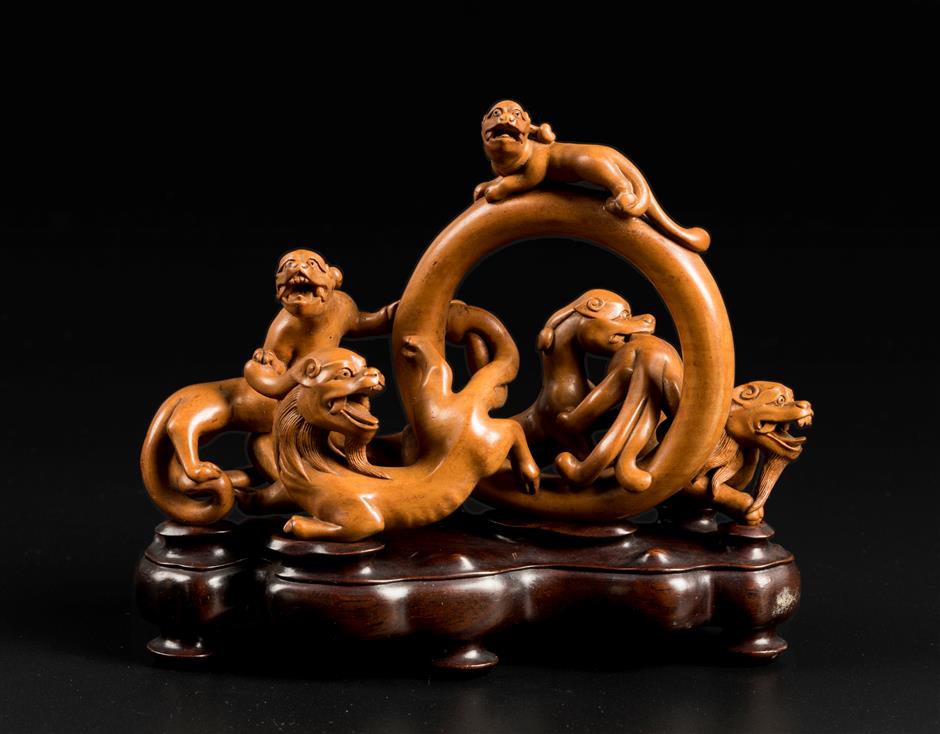 A sandalwood carving entitled “A Big Gathering at Lotus Pond” was done by the master craftsman Li Fengqiang about 18 years ago. It depicts a grand assembly of more than 100 Buddhas, who sit in pavilions, on open terraces and in a hall, all against a backdrop of fluttering prayer flags, clouds, flying birds, lush trees, blooming flowers and flowing water.

With care and precision, Li carved the figures with detailed facial expressions. Some look solemn, while others are smiling.

In the back of the work, simple carving skills were used to show cloud patterns and stone texture. The master made use of a hollow part of the original wood on the bottom to design a river running underneath.

The precious material adds more value to this artwork. The sandalwood was from an area of Indonesia where the trees grew for at least 60 years.

“Most of the Suzhou wooden carvings are just for appreciation without any functional purpose,” Chang said. “It’s a kind of aesthetics for ancient and modern scholars, and for bureaucrats in China.”

As Suzhou craftsmen carve to perfection, so do they stitch. Known for its elegance and delicate needlework, Suzhou embroidery is the most representative type of art in Chinese embroidery.

“Chairman Mao in His Study,” embroidered by Gu Jinzhen and five students over the course of 18 months, revives the scene of the great leader talking in a jovial mood in his study in the 1960s. It’s a double-side embroidery work — the front is colored and the back is black and white.

Indeed, Suzhou embroidery is the best purveyor of light and silk thread.

Embroiderer Yu Fuzhen’s two classic works “Black Cat” and “White Cat” are good examples. With the black cat stitched on a black background and the white cat on a white background, the felines take on different shades of color that vary with light. The color changes when the viewer changes his position. Yu has been called the “king of cats.” 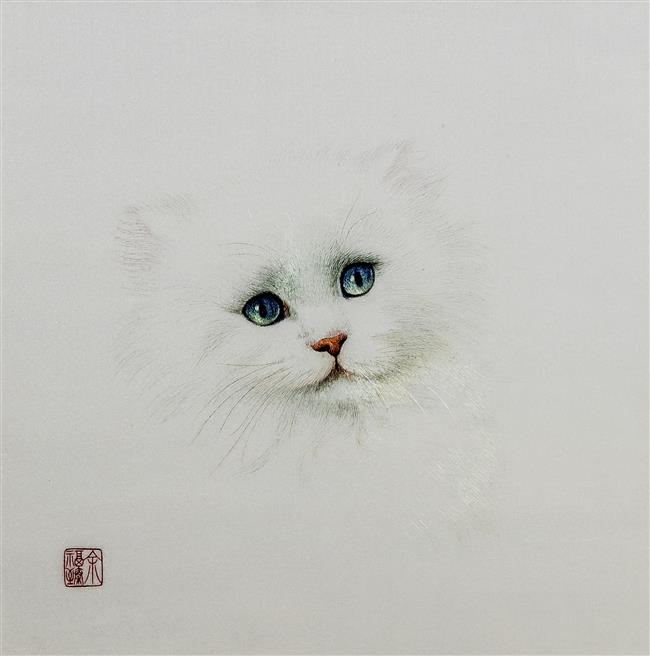 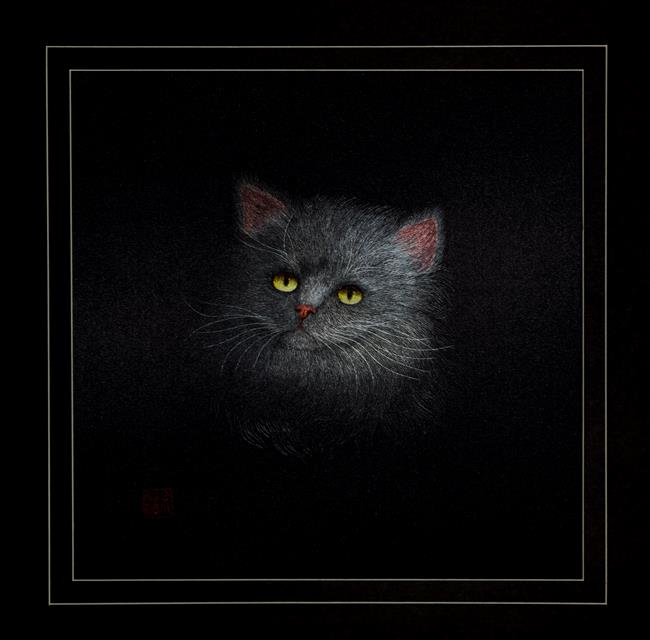 Suzhou embroiderers even used human hair in their stitch work.

“A Picture of Vimalakirti Lectur­ing” is all done in thin hair, stitch by stitch, including complicated patterns on a desk, the Buddha’s fluttering robe and the gorgeously decorated headdress. Only the seal is embroidered with red silk.

The delicate Suzhou-style needlework can also be seen on traditional opera costumes. Gold stitching was lavishly used in olden days. Gold was heated and stretched to the thinness of thread. In another not so extravagant method, gold foil was mounted on paper, then wrapped with silk and rubbed into threads.

For the elaborate headdress, a technique called dian cui was adopted. “Cui” refers to the kingfisher bird, whose turquoise feathers were shredded to make the blue color.

“The bird today is protected, and people have replaced it with blue velvet,” said Chang. “Some dye goose or duck feathers blue to keep the old tradition.”

The museum has so many fine exhibits that it’s hard to describe the experience of visiting there. The displays include traditional furniture, bird cages, lacquerware, folding fans and teapots. 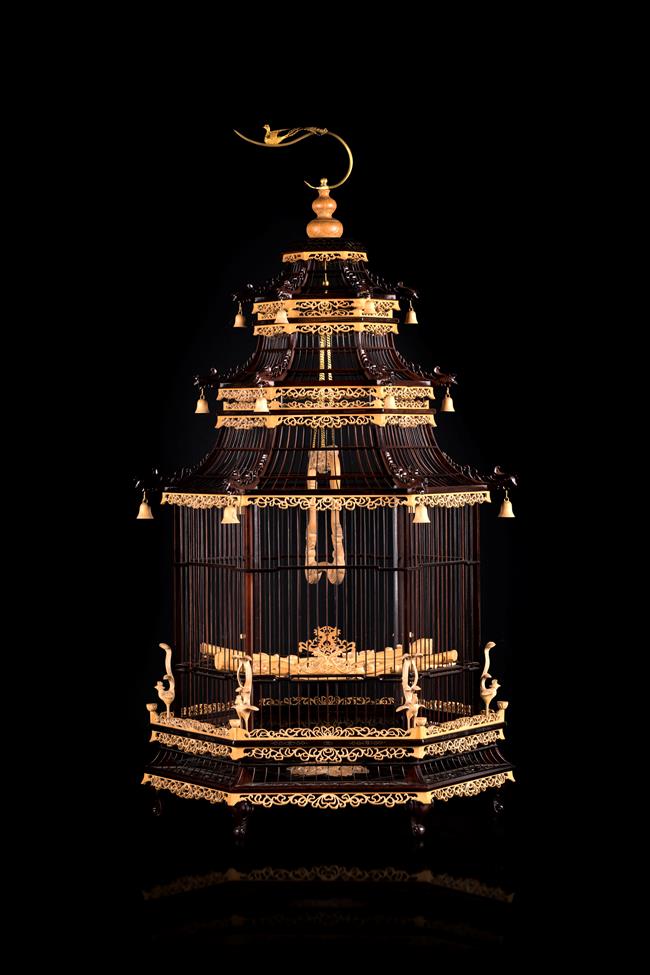 Bird cage made of sandalwood and boxwood by Xiang Kailin