Jing’an Park is a precious, pleasant oasis in the busy Jing’an Temple area. In the 19th century it was known as Bubbling Well Cemetery for foreigners in Shanghai, renowned for its tranquil environment, which attracted visitors just like it does today.

“Adjacent to the Bubbling Well Temple (today’s Jing’an Temple), the Bubbling Well Cemetery was managed and used mainly by expatriates for more than 70 years. The Chinese called it ‘Wai Guo Fen Shan (Hill of Foreign Tombs),” said scholar Zhang Sheng from Shanghai Academy of Social Sciences, who did a research of urban and architectural history around Jing’an Temple. 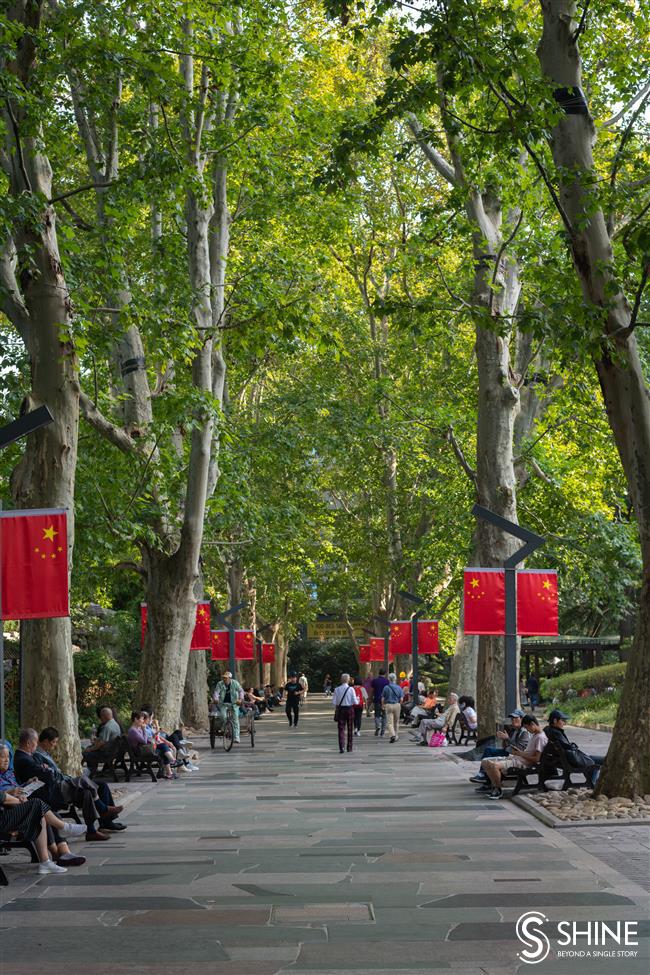 Jing’an Park is a precious, pleasant oasis in the busy Jing’an Temple area.

After Shanghai opened its port in 1843, the city saw a growing number of expatriates.

According to a study by scholars Chen Yunqian and Wu Min from Nanjing University and Suzhou Middle School respectively, the foreign population in Shanghai International Settlement rose from only 26 in 1843 to 2,297 in 1865. As the journey by sea from Europe to Shanghai took over four months, before the Suez Canal opening in 1869, many deceased expatriates were buried in Shanghai instead of being transported home.

The first foreign cemetery on Shandong Road near the Bund was built by the British in 1846 and had up to 469 tombs when it was closed in 1871. According to a report in the North-China Herald on December 7, 1929, a hand-bound volume revealed early burials at the cemetery mostly consisted of young men and women in their 20s.

More Western cemeteries were constructed following the first cemetery as foreign settlements expanded and the population of expatriates continued to grow.

“Managed by special institutions, these well-designed Western cemeteries made economic use of land, maintained a hygienic environment and presented an elegant, quiet garden ambience, many of which even became scenic spots. Some ceremonies, such as the annual US Memorial Day for honoring those fallen while in the service of their country often attracted local visitors,” Chen and Wu wrote in their co-authored paper titled “The Change of Shanghai Cemeteries under the Influence of Colonialism.”

As the city expanded from the Bund to the west along Bubbling Well Road (today’s Nanjing Road W.), Shanghai Municipal Council purchased some empty land fronting the southern facade of the Bubbling Well Temple in 1896. On the then suburban area, the council built a new cemetery and crematorium to meet the growing demand for Western burials and funeral services. 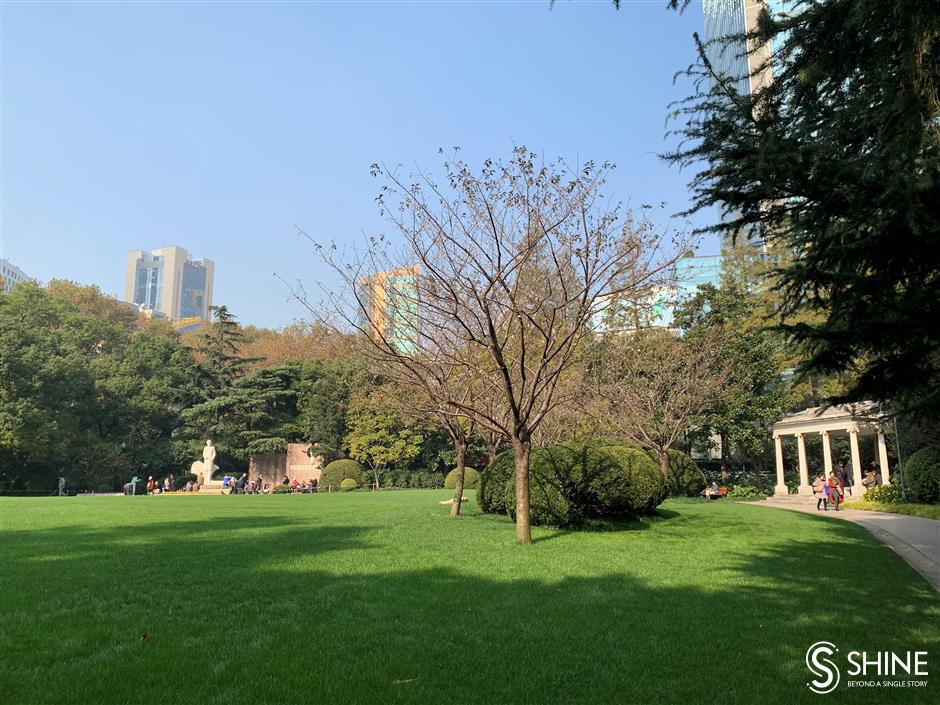 The big green lawn in Jing’an Park is an outdoor activity paradise for kids during weekends.

French historian Christian Henriot, who currently teaches at the Department of Asia Studies, Aix-Marseille University, pointed out an interesting phenomenon, that all the early foreign cemeteries were located in today’s downtown Shanghai as “the city has been developing and expanding so fast in the past decades.”

He said the Bubbling Well Cemetery was a typical example. During urban expansion, cemeteries which were built on cheaper land on the western outskirts of Shanghai were later  included in the city area.

As a result, Shanghai today is dotted with “cemetery” relics of yesterday through continuous urban renewal projects. The Shandong Road cemetery became Huangpu Stadium, the Baxian Bridge Cemetery was transformed into Huaihai Park and the Bubbling Well Cemetery is now Jing’an Park.

“The Shanghai Municipal Council invested 56,200 taels of silver to build the cemetery which experienced several renovations but its scale remained basically unchanged,” Henriot wrote in his paper titled “The Study of Public Cemeteries in Shanghai’s International Settlement.”

Covering an area of 39,300 square meters, the new cemetery contained a nursery garden, a small chapel, a crematory and a room for bone ashes. The burial ceremonies were mostly hosted in the chapel. 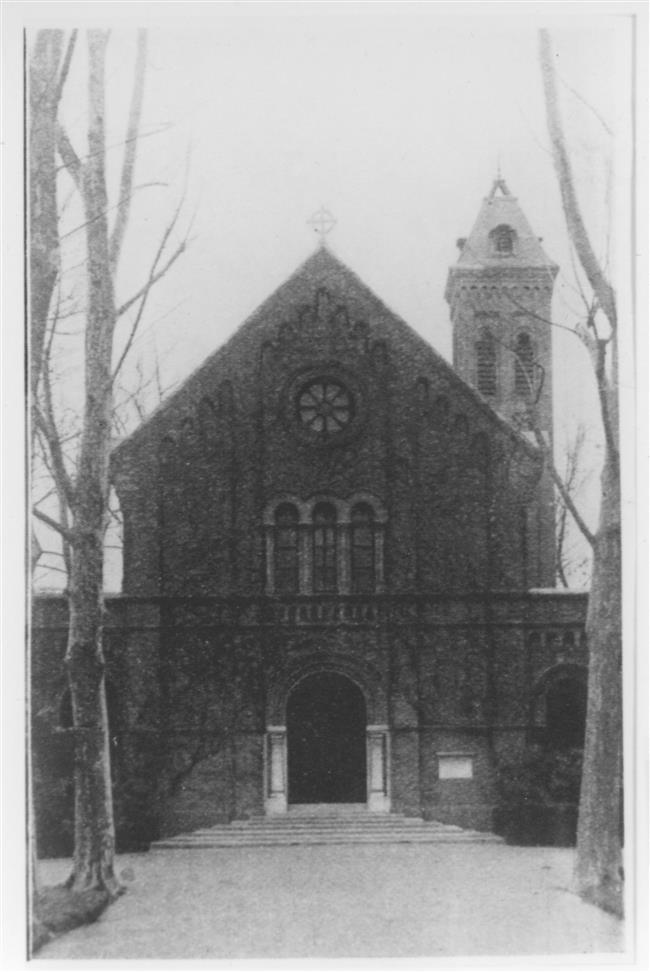 At the end of the thoroughfare used to stand the chapel of the Bubbling Well Cemetery.

According to Jing’an District annals, the cemetery had 6,214 tombs, with 5,363 of them occupied by 1949. The Chinese could also use the cemetery through bookings.

Owing to the convenient location, the Bubbling Well Cemetery was widely regarded as “the best cemetery” by the Shanghai foreigner community and therefore higher prices were charged for funeral services than the other cemeteries, such as the Hongqiao Cemetery which opened in 1926.

It was also the burial place for many prominent expatriates in Shanghai, including the German doctor Erich Paulun, who established the German Medical School for Chinese in Shanghai, and Henry Lester, a British architect, merchant and philanthropist in Shanghai.

The Tung Chee Hospital for Chinese, which Paulun founded in 1899 together with the German doctor Oscar von Schab, treated poor Chinese patients for free, which later evolved into today’s Chang Zheng Hospital and the Medical School of Tongji University.

British tycoon Henry Lester made a fortune from Shanghai’s old real estate but donated almost all of his assets to the education of Chinese people. It included a medical institution that still stands a few minutes’ walk from Nanjing Road W. and a foundation that still sponsors Chinese scholars studying in the UK today. 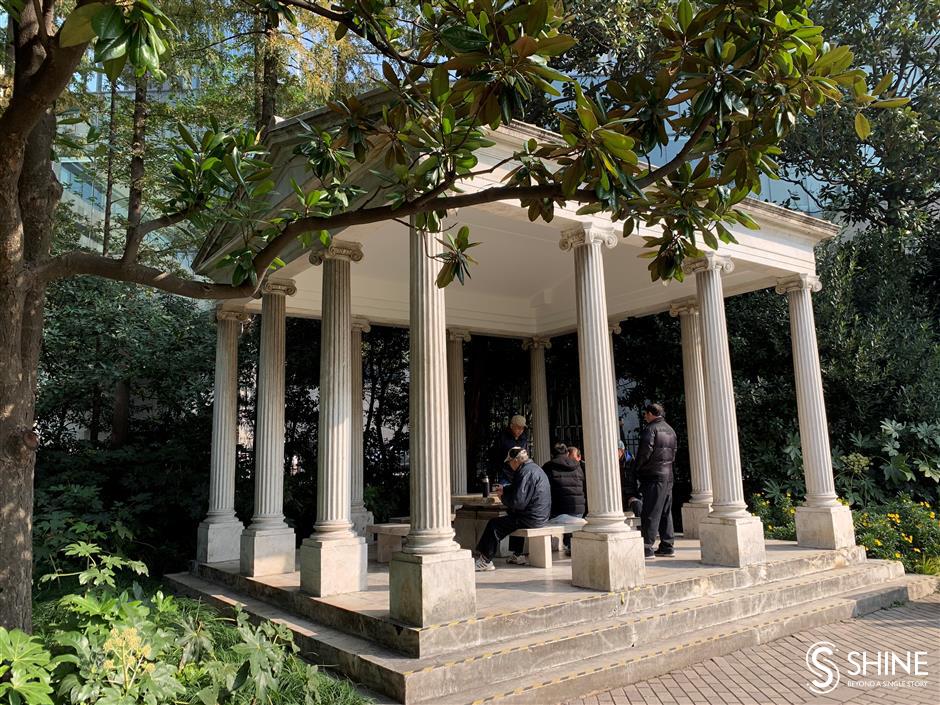 The white marble pavilion is one of the relics of the old cemetery.

Scholar Zhang Sheng from Shanghai Academy of Social Sciences also scooped a vivid Chinese memory of this famous cemetery in the late 1920s.

“I was not clear about the cemetery’s history. But I remembered there were two lines of plane trees, which were around 60 years of age, stretching from the gateway through the back of the chapel in the center. From the south window of my small room over the kitchen, I could see the Bubbling Well Cemetery. On each tomb, there stood marble angles,” Wang Yingxia wrote in her diary soon after she married Yu Dafu, a popular short-story writer and poet in the 1920’s China, and moved into an alleyway house on Hart Road (today’s Changde Road).

Her account was echoed in an article titled “A Visit to the Bubbling Well Cemetery” published on February 23, 1947, in a Chinese newspaper, which was a predecessor of today’s Xinmin Evening News.

“It was the only clean land in the bustling downtown, where wars, tricks and cheats were not conducted,” says the writer in the 1947 article.

Six years later, the clean land was turned into a public space. According to the book “Jing’an History and Culture Catalogue,” Shanghai government moved the tombs to another “Hill of Foreign Tombs” in Pudong and transformed the downtown cemetery to Jing’an Park which opened to the public on October 3, 1955.

Since then the park has been an oasis in the bustling commercial center of skyscrapers and busy traffic. People come to the park to walk, practice tai chi, read newspapers, play chess or meditate. During weekends, the big green lawn is an outdoor activity paradise for kids.

The park was renovated several times and a pond, a rockery and a two-story teahouse were later added. In 1998, the park was upgraded again. The project’s highlight saw a 2,300-square-meter garden created to revive eight famous scenes in Jing’an Temple history, starting from East Jing Dynasty (AD 317-420), including the famous Bubbling Well, which Nanjing Road W. was named after in English.

Huang Caidi, the then director of Jing’an District Landscaping Bureau, who headed the project, notes that some historical relics were well-preserved, including the white marble pavilion and 32 100-year-old plane trees lining the avenue, which witnessed the life and death of Shanghai expatriates from a bygone era. 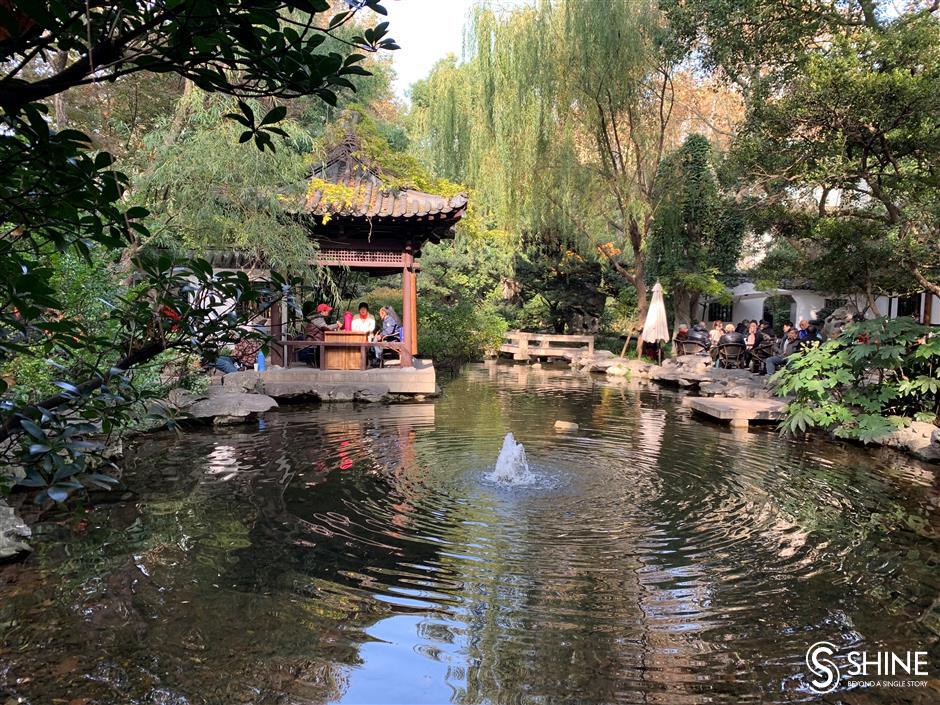 The famous Bubbling Well, which Nanjing Road W. was named after in English, was recreated in the Eight Scenes Garden when the park was renovated in 1998.

Tips: It’s free and nice to wander in this incredibly beautiful park in downtown Shanghai. The mini garden that revived eight scenes in the history of Jing’an Temple is small and elegant which serves Chinese tea. The Jing’an Park is free for entrance and the mini garden charges 3 yuan (43 US cents) per person. 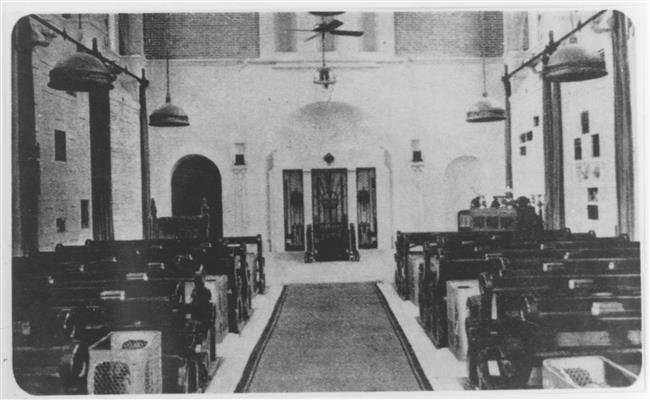 Inside of the chapel where burial ceremonies were held in the 19th century Shanghai.

American community out in force for Memorial Day

Memorial Day, the United States national occasion for honoring those fallen in the service of the Republic, was celebrated on May 31, in an impressive manner by practically the entire American community in Shanghai.

Early in the morning members of the American Women’s Club decorated the graves in the Hongqiao, Baxianqiao and Bubbling Well Cemeteries with flowers gratefully donated by themselves and others in the American community. This custom of grave decoration is universal throughout the United States, and the local public-spirited women did an estimable work. It was a perfect day for Memorial Day, and the beautifully adorned graves were a fitting tribute to the patriotism of those being honored.

The main event of the day was the celebration at the Bubbling Well Cemetery presided over by Mr E. S. Cunningham, American Consul-General, and participated in by representatives of all American organizations in Shanghai.

A parade was formed at 8:30am at the Race Course where detachments were drawn up of the 2nd, 19th, 25th and 26th US Marines’ companies under Capt. Cornell with the 4th Regt. Marine Band furnishing the music.

The official group on the chapel steps included in addition to Mr Cunningham, Mr J. Jacobs, Consul and Dr G. Sellett, US District Attorney. The Girl Guides were grouped on the left of the steps and the Spanish War Veterans on the right with the Marines ranged along the path leading to the gate. The other units took up positions as close as possible to the speakers.

The Rev E. W. Luccock, pastor of the Community Church, offered prayer and was followed by Dr Sellett, who addressed the gathering on the significance of Memorial Day and its place on the list of American national holidays.