In AD 742, an invitation from the Japanese imperial court witnessed Jianzhen, a 55-year-old Chinese monk, travel east to Japan to propagate the Buddhist faith.

In the following 12 years, his five attempts to cross the sea all failed.

Finally, at the end of AD 753, with the help of Japanese missions to the Tang Dynasty (AD 618-907) empire, the blind monk managed to reach his dream destination after an eventful sea journey of several months.

“A Blessing over the Sea: Cultural Relics on Jianzhen and Murals by Higashiyama Kaii from Toshodaiji” is now on display at Shanghai Museum through February 16 to celebrate the blind monk’s journey.

Toshodaiji, sited in Nara and founded by Jianzhen in the mid-8th century, is regarded as the head temple of Japan’s Ritsu denomination of the Buddhist faith. The temple, architecturally emulating those in the height of Tang China, is officially designated as a national treasure of Japan.

The exhibition features some antiques from Jianzhen’s legendary life and 68 murals painted by Higashiyama Kaii (1908-99), which were first unveiled in China.

“On display here are both relics of the Nara period and contemporary paintings from the collection of Toshodaiji, demonstrating that Sino-Japanese exchanges have a long history,” said Yang Zhigang, director of Shanghai Museum.

In AD 756, Jianzhen was honored by the court as Daisoto, the highest level in the second rank of Japan’s Buddhist clergy. The following year, he retired to a piece of land in the western part of Nara and set up, with his disciples, a private temple for studying monastic rules, which later became Toshodaiji. He lived there for five years until he passed away in AD 763.

In Toshodaiji’s early days, Empress Koken (r. AD 749-758), bestowed an imperial plaque with a hand-written inscription “Tang Zhao Ti Si,” the four Chinese characters for the temple’s name, imitating Wang Xizhi (AD 303-361), the most celebrated Chinese calligrapher. The plaque has been well preserved and is displayed at the exhibition.

Kinki Sharito, a pagoda-shaped gold reliquary with a tortoise base storing the sariras that Jianzhen carried to Japan, is also on show.

“The Sea Journey to the East of a Great Bonze from the Tang Dynasty,” a painting representative of 12th century Japanese art, depicts how Jianzhen disdained myriads of hardships and troubles to reach Japan.

Perhaps the most eye-catching works are the 68 murals created by Higashiyama Kaii.

In fact, with Toshodaiji undergoing a comprehensive renovation, the 68 murals are not usually exposed to the public.

“Even those who have been to Toshodaiji in Japan may not be able to appreciate them all in the temple,” Yang said.

In 1971, after much deliberation, 63-year-old Higashiyama decided to take a commission of Toshodaiji and paint 68 murals as well as the niche for the seated statue of Jianzhen.

To fulfill his job, he studied Jianzhen’s life and the history of the temple. He also visited several places of scenery and of historical note boasting relics in both Japan and China before he finally finished the project in 1981 at the age of 73.

Visitors are genuinely astonished by these breathtaking murals. It’s as if they have been transported back in time to Toshodaijiin in the eighth century Nara period.

Born in 1908 in Yokohama, Japan, Higashiyama was famous for his landscape paintings. His works integrate the abstraction and implicitness of traditional Japanese paintings and the realism of Western art known for capturing fleeting moments to form a dynamic space brimming with vigor.

He used Japan’s mountains and seas as the subject for “Mountain Clouds” and “Sound of Waves.” When creating the two paintings, he seemed to fuse the sound of mountain winds and the surging ocean waves that the blind Jianzhen might have perceived upon first setting foot in Japan.

In these works, he chose not to paint any specific tourist attraction in Japan, instead, he conjured up an ideal scenery in his mind.

Free from his usual passion for colors, everything was done in monochrome, only in different shades.

While in “Balmy Breeze in Yangzhou,” “Huangshan Mountains in Morning Mist” and “Moonlit Evening in Guilin,” the painter tried to reflect scenes in China, or to be more exact, Jianzhen’s unforgettable memories.

Higashiyama believed that it would be of profound significance to dedicate the paintings to Jianzhen, who had made heroic sacrifices to cultural exchanges between Japan and China.

This was the first time that he had painted in ink wash, reflecting a space of serenity, which might have helped to relieve the Chinese monk’s aching homesickness.

He blended scenery and sentiments perfectly in this series of works, combining Japanese, Chinese and Western concepts and styles, and dedicated the entire set to the memory of Jianzhen and his odyssey to Japan. 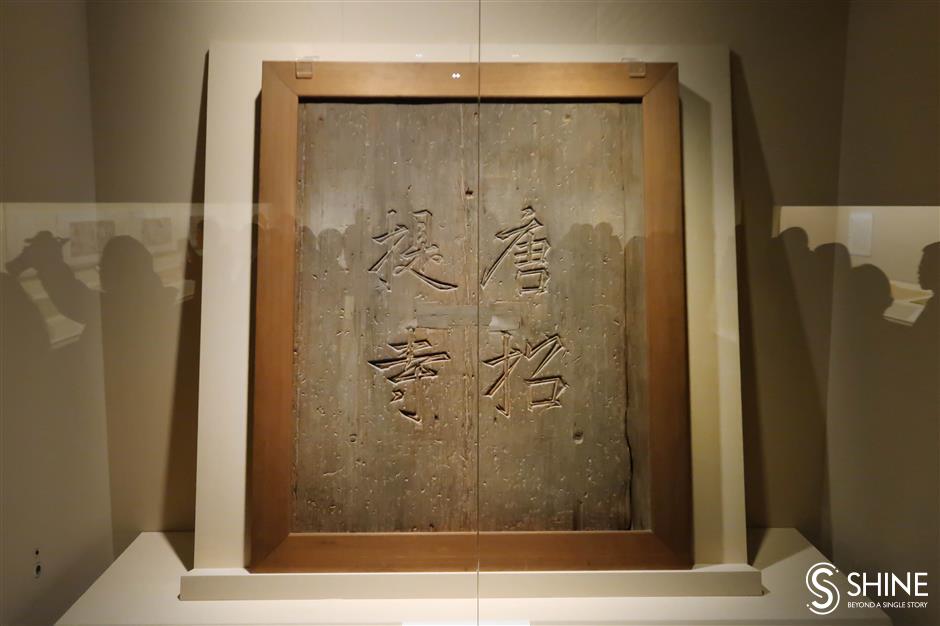 The imperial plaque bestowed by the Empress Kouken