Since its establishment in 1929, Zhejiang Museum in Hangzhou has received donations of artifacts, paintings, porcelain and crafts from around 1,000 individuals.

According to the museum, public donations account for 45 percent of its collections, which have helped the museum’s development and protected cultural heritage in Zhejiang Province. 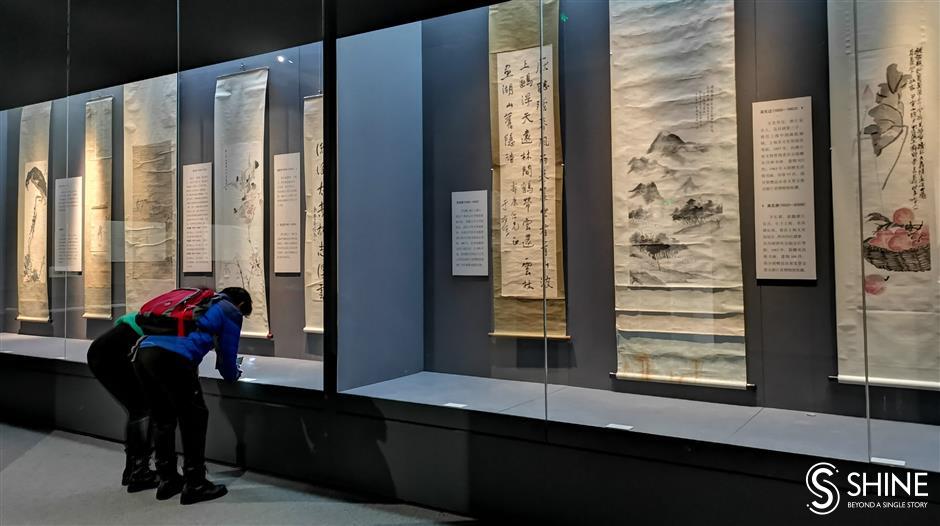 Visitors have a close look at the introduction of paintings and calligraphy works on display at West Lake Gallery of Zhejiang Museum. 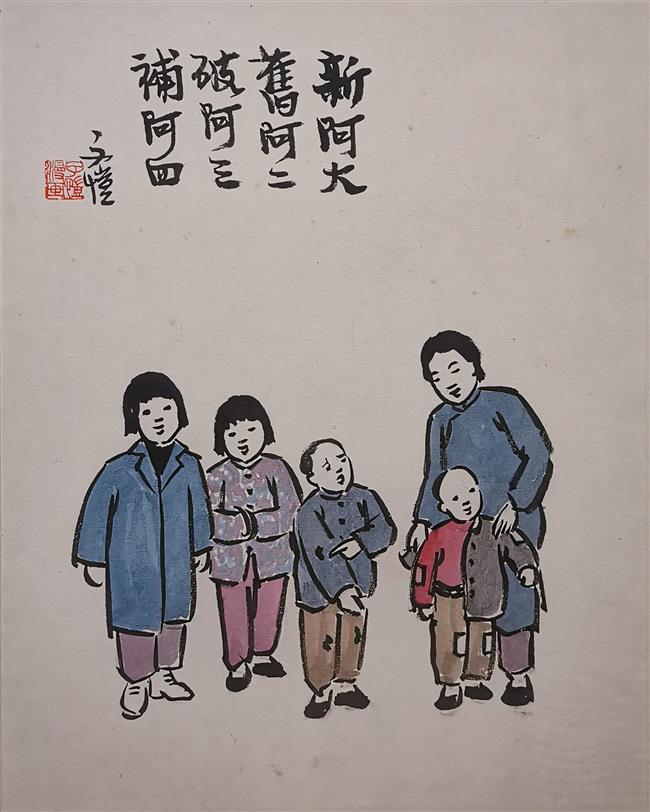 A painting by Feng Zikai

To pay respects to donors and celebrate the museum’s 90th anniversary, an ongoing exhibition at West Lake Gallery is displaying some of these donations through March 8.

Among private donors, Hong Kong entrepreneurial couple Ronald Chao and his wife might be the most well-known.

In ancient times, lacquer tree sap was used to varnish and protect daily necessities. Objects covered with lacquer were moisture-resistant, heat-resistant, corrosion-resistant, smooth and shiny. They gradually developed into a traditional craft.

Chao’s ancestral home is in Zhejiang. The couple began collecting lacquer wares in the 1980s. Most were items used in imperial palaces, such as dining ware, bowls, vases and decorative objects.

The exhibition showcases four pieces donated by the couple. Every piece is carved with sophisticated patterns.

Other highlights include works by Feng Zikai (1898-1975). Monk Guangqia donated these paintings in the 1980s.

Feng was an influential contemporary caricaturist, who used Chinese ink and traditional painting techniques to create his iconic images.

During a lifetime of traveling in China, Feng loved Hangzhou the most. He mentioned it several times in his writings as a “second hometown,” after his birthplace in Tongxiang, Zhejiang Province. He created a series of caricatures based on Hangzhou’s lifestyle and West Lake.

In addition, the exhibition also displays woodblock prints donated by the families of Zhang Yangxi and Zhang Huaijiang.

Zhang Yangxi’s great contribution to art was the establishment of the woodblock printing department at the China Academy of Art.

He integrated the styles of pictorial clay tablets from the Han Dynasty (206 BC-AD 220) and the Zhejiang School of woodblock printing, using plain, strong lines to depict the environment and facial expressions.

Zhang Huaijiang was considered a leader of China’s second generation of woodblock-printing artists and an important educator. His work closely reflected his times. A native of Zhejiang Province, he is known for his revolution-themed prints.

Another highlight is a guqin, seven-string traditional Chinese instrument, contributed by Pan Luyuan. In the 1930s, it was donated to the Zhejiang Museum and has since been a centerpiece of its musical collection.

The prized instrument dates to the Northern Song Dynasty (960-1127). In ancient China, scholars played the instrument for reflection and self-cultivation. To this day, it is considered an instrument of great subtlety and refinement.

Porcelain wares also account for a big part of the donations. An exhibited ceramic pillow, fired in the Cizhou Kiln during the Song Dynasty (960-1279), was given by Chen Qicheng in 1985. 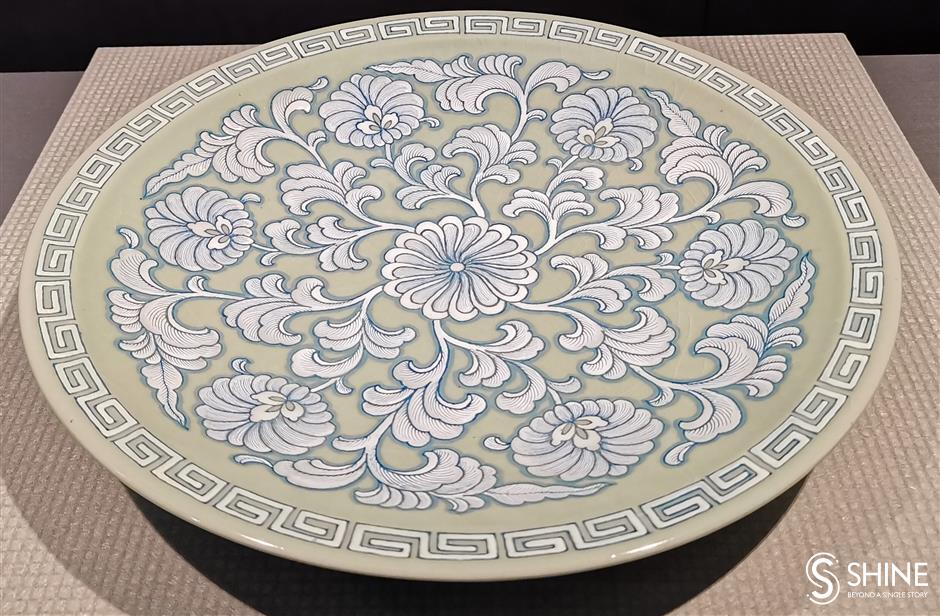 A piece of work by Ji Xigui 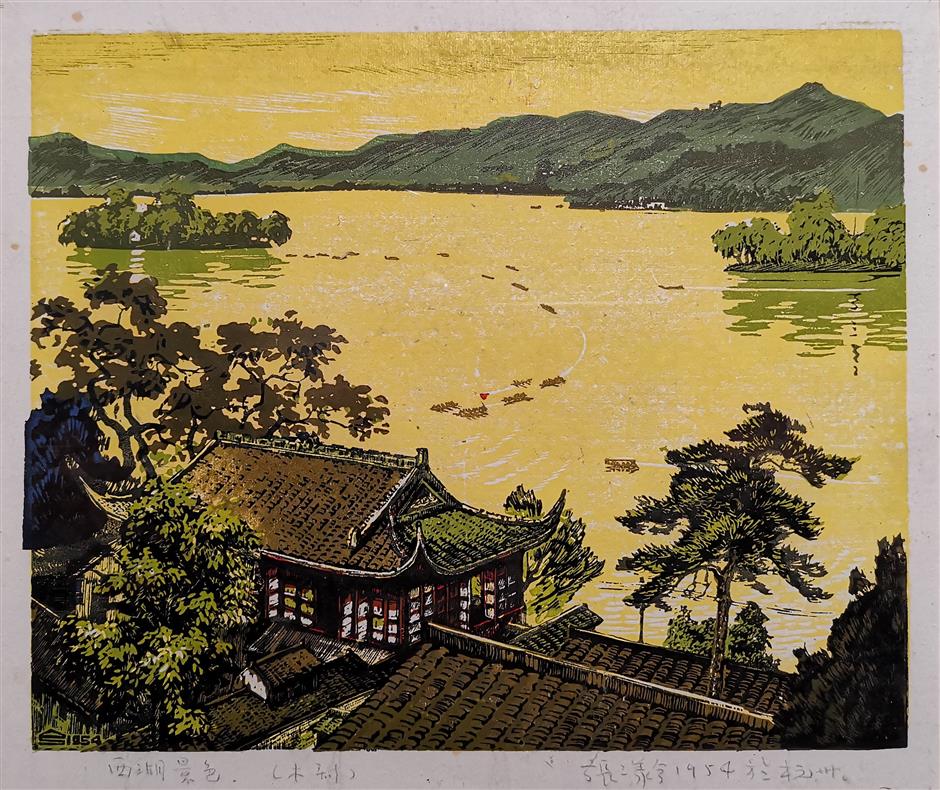 A painting by Zhang Yangxi 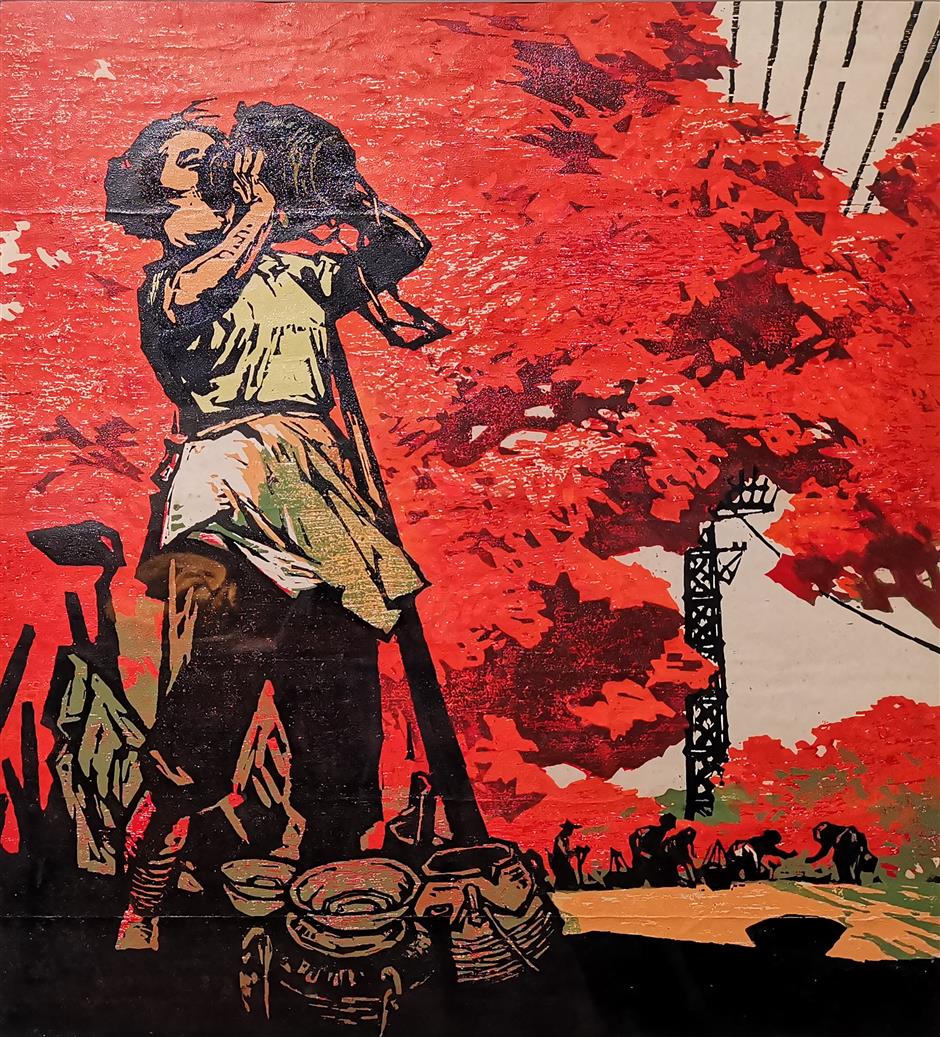 A piece of artwork by Zhang Huaijiang

For many in ancient China, getting a good night’s rest meant snuggling up with a ceramic pillow. During the Song Dynasty, ceramic pillows reached a new height of craftsmanship as artisans incorporated shapes and patterns into their pillow designs.

The displayed pillow is monochromatic, reflecting a preference among literati for simply adorned porcelain goods. Without complicated patterns or color schemes to mask flaws, this lightly decorated pillow is an example of fine craftsmanship.

Over the past decade, Zhejiang Museum has also received donations from intangible cultural heritage inheritors. At the exhibition, Shanghai Daily found works by masters Zhao Xixiang and Ji Xigui.

Zhao, 84 years old, has been making lace for more than 60 years. He donated a bedspread that took him about one year to complete.

Half a century ago, he developed a new style that integrated lace with embroidery. Silk is too fragile to make lace, so Zhao wove embroidered silk cloth and lace together. The embroidery is white while the lace is beige. The mixed hues give a deceptive 3D effect.

Ji, 78, is recognized as a national master of Yue Kiln craftsmanship. She learned about porcelain when she was a child growing up in Jingdezhen, one of China’s centers of porcelain making. She gave away a ceramic plate ornamented with a peony pattern.

Date: Through March 8 (closed on Mondays)