An Jianqiu displays black-and-white portraits of five generations of ancestors in his Shanghai martial arts club. At 38, he is the inheritor of the noble tradition of Chinese boxing and an ardent promoter of wushu.

An, born in Shandong Province, is not content to limit his scope to locals. He makes regular trips to Europe to hold workshops and has trained more than 1,000 foreign students.

“Wushu is about defending and attacking,” he says, “but it is also about cultivating one’s personality and inner quality.” 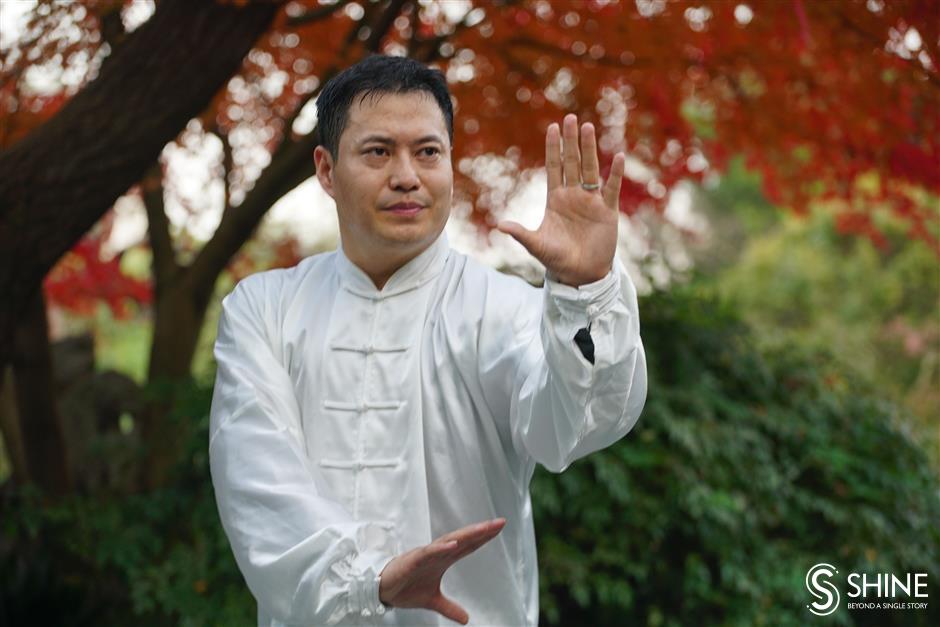 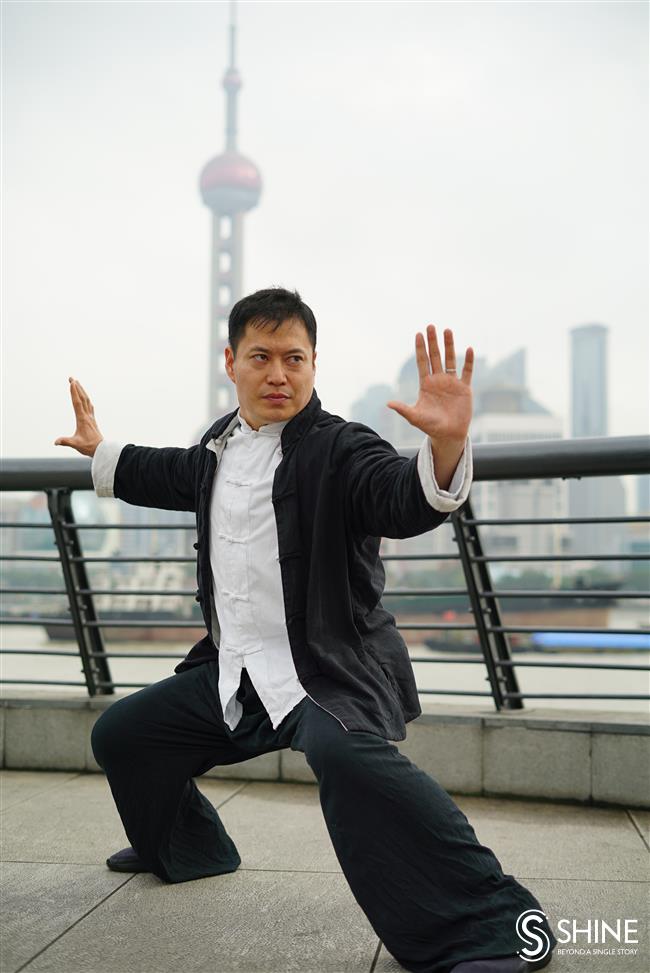 An is the inheritor of bajiquan, a specialty of his family’s wushu that originated from Shaolin boxing.

An is neither tall nor beefy, but he possesses power in almost every part of his body — palms, shoulders, waist and knees. It’s the accumulation of training and practice that began when he was 6.

“My childhood was very different from others’,” he says. “I seldom had leisure time. Outside of school, it was wushu practice all the time, in the early morning and late at night, from basic body training to different styles of boxing.”

An had a very strict father, who was a master of the art. An describes him as a “traditional” man of extreme self-restraint, who wanted to pass on the same strict regime of standards to his son. There was a time, An says, when he loathed his father for depriving him of a normal childhood and treating him so harshly.

“Sometimes he could be violent,” An says. “I remember that I had very limited time to play video games back then. One time when he found me playing games secretly, he smashed the console right in front of my eyes.”

However, all that strictness eventually bred a son of superior boxing skills. An even mastered bajiquan, a specialty of his family’s wushu.

Bajiquan originated from Shaolin boxing. It features explosive, short-range power and relies heavily on elbow and shoulder strikes. It requires practitioners to parry attacks from all directions and strike back to the extremes of their power.

“You don’t use any weapons in bajiquan; you use your body parts as weapons,” An explains. “You have to harden your body parts, even your palms. At the same time, you need to cultivate your qi (energy flow) so that you can strike as swiftly and powerfully as possible. That’s why bajiquan, and Chinese wushu in general, is not only an art of fighting, but also an art of self-cultivation.”

According to local county annals, the first of the An family ancestors was An Lirui, a constable charged with catching criminals in the city of Tangshan in Hebei Province. He studied boxing with a Shaolin monk who had resumed secular life. An Lirui’s son An Jihai was a chef but learned wushu and then passed his skills on to his son and grandson, who is An’s father. 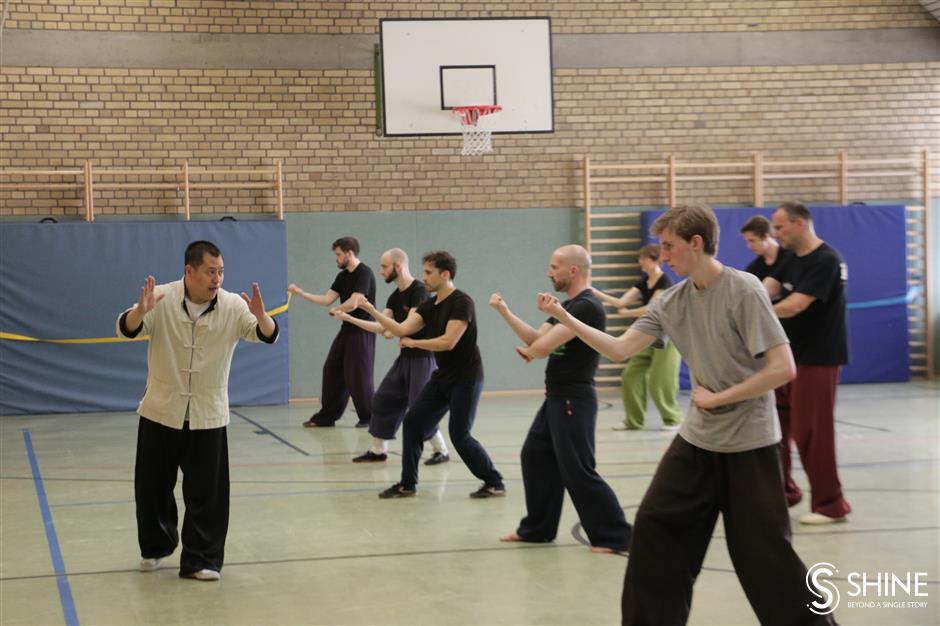 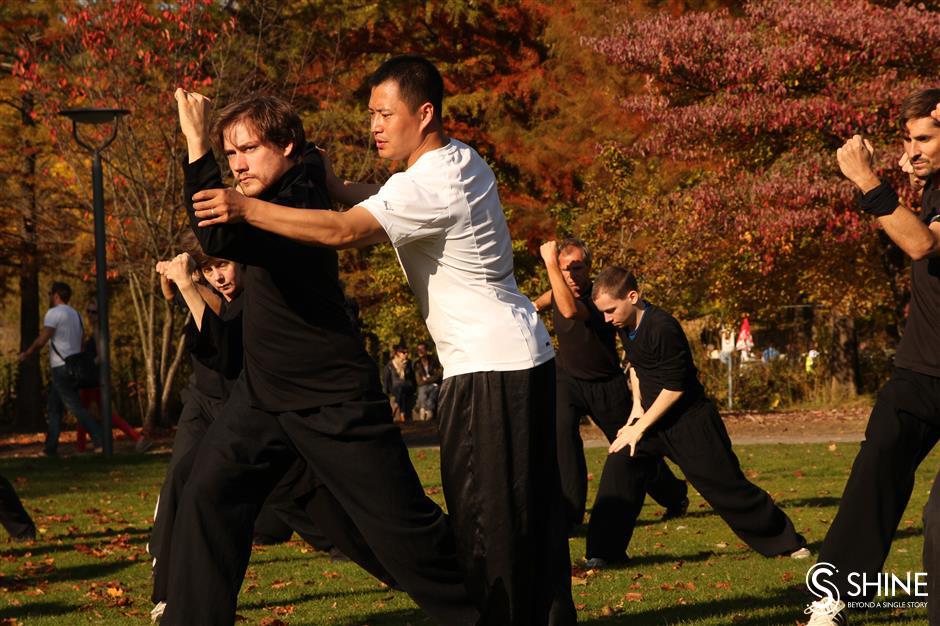 An teaches Chinese boxing to foreigners, both at home and abroad.

All the rigorous discipline demanded by that father eventually paid off. An Jianqiu began winning national championships in boxing at about the age of 20 and became a coach at the Beijing Language and Culture University. There, he had his first experience teaching wushu to foreign students.

“I find that most of my foreign students are truly interested in and respect wushu and Chinese culture in general,” he says. “Maybe that’s why they always persevere in practicing.”

Some European students, when they returned to their home countries, invited An to come and hold workshops. For the past several years, he has held workshops in Germany, Austria, Italy, Greece and about six other countries.

He schedules sessions of seven to 10 days, six hours each day. Every session has a theme, such as how to use bajiquan in actual combat.

His teaching videos can be found on YouTube. He is said to be one of the few Chinese wushu masters willing to teach actual combat skills.

“I find that Western students are respectful toward the etiquette and doctrines I ask them to follow,” he says. “Such rituals give them a sense of seriousness and help them get into the groove.”

At the same time, Western students don’t care about “face” in combat. In training, they are perfectly willing to bring their full strength to bear against an opponent, without worrying about hurting his feelings.

“This is obviously a cultural difference,” An says. “When I teach Chinese students, I often tell them to save each other’s ‘face,’ a concept deeply rooted in Chinese culture. But Western students don’t really care about that. They can fight hard in the ring and then hug each other afterward and still be friends.”

An says he started out uncertain about his future. Should he continue the family tradition of promoting wushu or perhaps maybe try something new?

He did, in fact, start to do some business with friends before he went into a long meditation about what kind of man he wanted to be. Reflecting on his family’s history, he finally decided to devote the rest of his life to wushu, but he’s not sure if his daughter will follow in his footsteps.

“Of course, I will give her guidance, but it’s up to fate to decide whether she will continue the same path,” An says. “To me, it is the same teaching my child as teaching anyone else.”