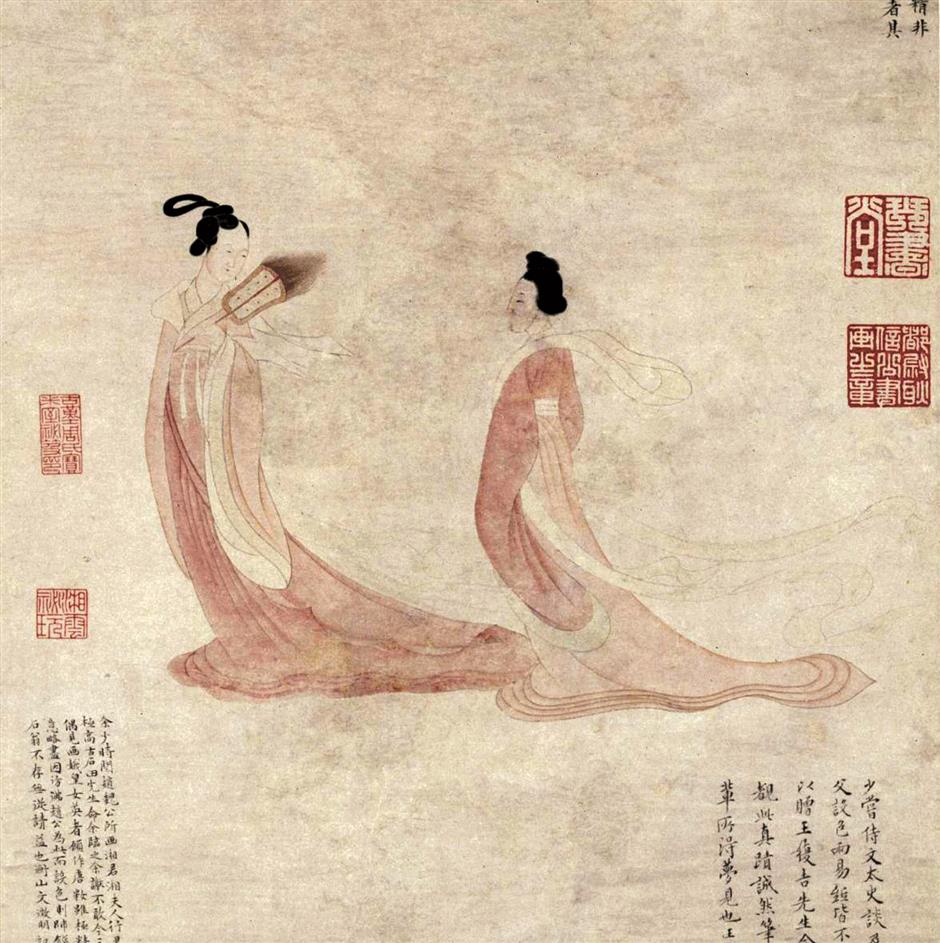 The renowned scholar was a late bloomer. It is said that Wen couldn’t walk until he was 7 years old and couldn’t speak until he was 11. But at the age of 13 he began to show his talent in literature, painting and calligraphy.

Although the scholar was gifted, versatile and hardworking, he experienced a tough political career. He took the triennial provincial imperial examination 10 times and failed each time.

Wen finally achieved prominence when he was as an academician-in-attendance at Imperial Academy at the age of 53.

He spent three years working there before realizing it was not the life he wanted. Wen, therefore, resigned the position in 1526 and returned home to devote his life to poetry, calligraphy and painting.

He excelled in painting landscape and plants under his painting teacher, Shen.

One of Wen’s representative works portrays two women, who are believed to be Ehuang and Nuying. The duo are Xiang River Goddesses and wives of Emperor Shun (2287-2067 BC) in Chinese folk religion.

The Xiangjiang River is the chief river of the Dongting Lake drainage system of the Yangtze River.

It was recognized as the river of love by the ancients from the Kingdom of Chu.

Qu Yuan (340-278 BC), a Chinese poet and politician of the kingdom, recorded the related myths in the form of songs.

Legend says that Ehuang and Nuying were the daughters of Emperor Yao (2377-2259 BC) who was a legendary Chinese ruler. He betrothed them to Shun and appointed Shun as his successor to the throne.

Emperor Shun was diligent during his reign. But in his last year he toured the country and died suddenly of an illness on a journey near the Xiangjiang River. Hearing the news, Ehuang and Nuying rushed to his body. Weeping for days — the duo drowned themselves in the Xiangjiang River.

Wen read the myth of Qu’s “Songs of Chu (chu ci),” which was one of his favorite books. Wen admired Qu’s patriotism and the romanticism embedded in Qu’s text. Thrilled by the myth, Wen asked his friend Qiu to transfer the words into a painting.

A few days later, Qiu sent his work to Wen. Wen thought the figures of the goddesses Qiu painted were gorgeous but too showy. Wen decided to depict his imaginary goddesses personally on canvas.

For several days, he did nothing but ponder over the image of the goddesses. One day, Wen visited his friend who showed him a Song Dynasty (960-1279) facsimile of Gu Kaizhi’s “Nymph of the Luohe River.” Gu was a celebrated painter of the Eastern Jin Dynasty (AD 317-420) and he created the 6-meter-long work after reading Cao Zhi’s rhapsody of the same name, which tells the bittersweet love story of a man and a deity.

Resonating with the elegant figure of nymph, Wen took Gu’s painting as a blueprint. In Wen’s painting, two goddesses of the Xiangjiang River were also graceful and mysterious. One of them holds a feather fan and looks back whilst another goddess stands in a relaxed pose and smiles. With their ribbons and robes blowing in the wind, the goddesses seem to be floating in the air.

The application of subdued pigments and the empty space as a background set the peaceful tone for the handscroll.

Apart from painting, Wen was also dedicated to calligraphy. It is said that Wen was often ridiculed by his friends due to his ugly handwriting when he was young.

Determined to improve his handwriting, Wen studied a wide range of calligraphy works from the past. He practiced calligraphy every day even when he was in his eighties. Practicing calligraphy, just like eating and sleeping, was one of his daily routines.

Wen inscribed two related poems, which were composed by Qu, at the top of the portrait of the two goddesses.

The portrait of the goddesses of the Xiangjinag River is one of a few surviving Wen’s figure paintings. He was very satisfied with it and handed it to his son Wen Jia.

Sent to the imperial court of the Qing Dynasty (1644-1911) as a tribute, the handscroll is now in the Palace Museum in Beijing.