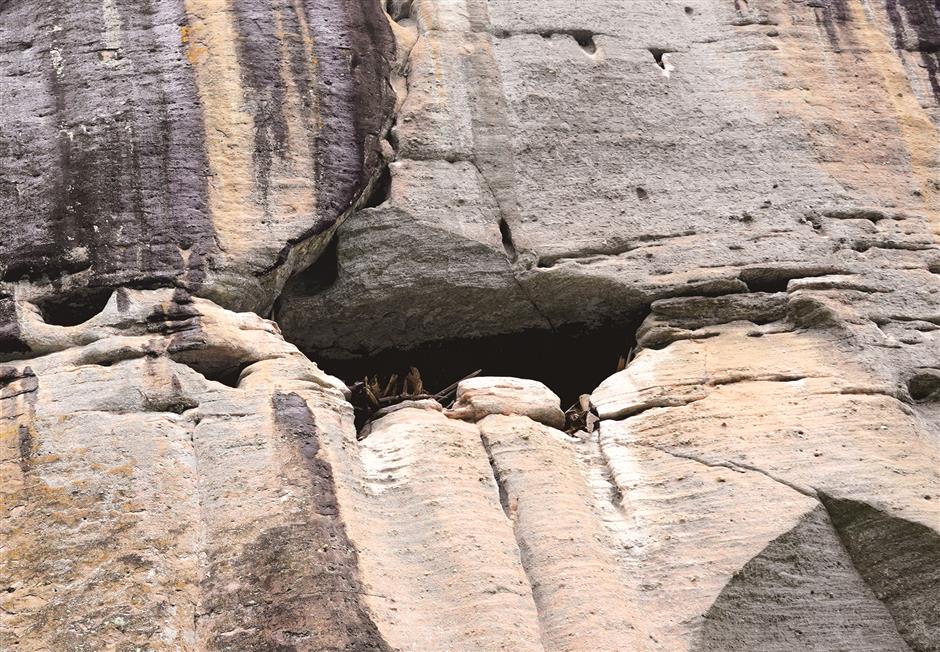 High up on the steep cliffs and between the rock cracks of Mount Wuyi in Fujian Province, hanging coffins are created for the ancestors of Wuyi locals.

High up on the steep cliffs and between the rock cracks of Mount Wuyi in Fujian Province, hanging coffins are created for the ancestors of Wuyi locals. The graveyard also reveals a unique ancient funeral custom that dates back more than 2,000 years ago.

Today, if you take a water tour on the crystal clear river, look up and you will see the mysterious tombs in the natural cracks, gaps and caves on the waterside cliffs, which were formed by the orogenic movements that folded, fractured and uplifted the mountain.

They were all placed high, overlooking the water running down below. Some of the tomb caves have a wooden plank set up at the entrance called Rainbow Path, which Wuyi forefathers believed to be the road to heaven for the souls of the deceased.

“The cliff coffins leave us many puzzles to be unlocked,” said Chen Long, director of the Fujian Province Museum. “Unlike a traditional funeral custom where people are buried underground, Wuyi ancestors put the coffins on the precipitous rocks. Why and how they did it this way still remains a mystery today.”

About a thousand years ago, a scholar in Fujian Province happened to discover the cliff tombs and recorded the find in his journal as the “hanging coffins.”

“According to historical research, there were about 1,500 hanging coffins on Mount Wuyi by the end of the Qing Dynasty (1644-1911), but we’ve found about 20 so far,” said Mei Huaquan, the museum’s researcher and the first person to go into the cave and see a coffin in 1978.

He unfolded an old map that marked numerous cliff tomb sites, but most of the places are nowhere to be seen today.

In 1978, an archeological team arrived at the northwestern foot of the Mount Wuyi and tried to unravel the mystery for the first time. The face of the 500-meter-high massif had dozens of natural caves, and the team selected one that was found as a cliff tomb site in earlier researches.

But the attempt to get into the cave was dangerous.

“I almost killed myself,” said Mei, who was 29 years old at the time.

He was winched down in a cable basket from the top of the cliff to the cave entrance, about 50 meters high.

“The basket wobbled badly,” he said.

When Mei finally set foot in the cave, he saw the coffin at first glance. The cave was small, 5 meters deep, 6.8 meters wide and only 1.5 meters tall. Mei had to bend down all of the time.

The coffin, made of a whole piece of wood, was built in the shape of a boat, 4.89 meters long, 55 centimeters wide and 73 centimeters high. At one end of the coffin lid, small square holes were carved out, which was considered to be the holes to insert the masts. 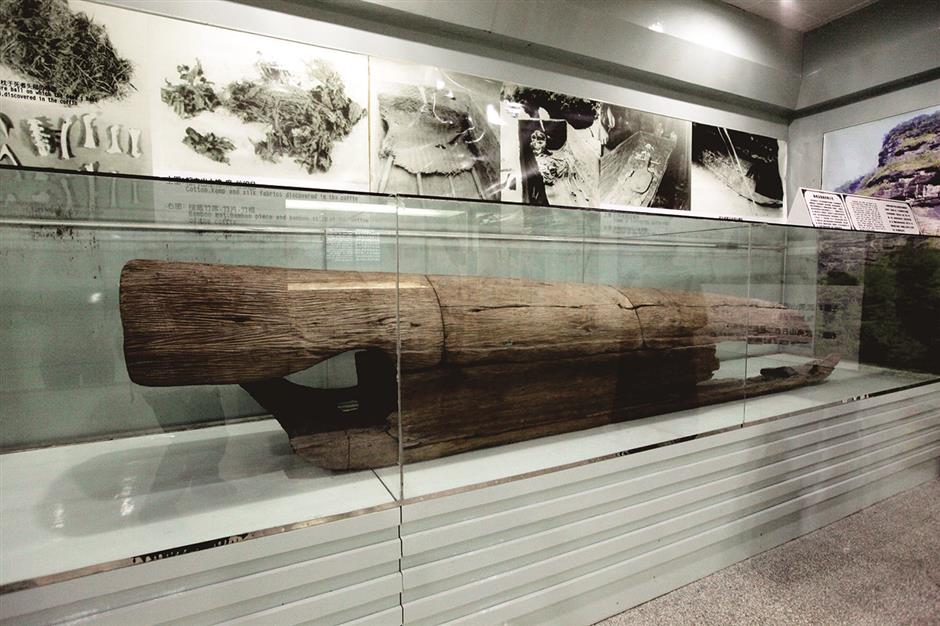 The hanging coffin was made of Phoebe Bournei, a unique tree with hard, non-perishable texture and long-lasting fragrance.

The coffin was made of Phoebe Bournei, a unique tree with hard, non-perishable texture and long-lasting fragrance. Threatened by habitat loss, the species is under second-class national protection in China.

Finely made, the coffin’s parts fit smoothly, and the regular holes were neatly carved, which showed a high level of woodwork with metal tools, not coarse stone tools.

It might suggest the coffin was produced in the metal age. According to the carbon-14 dating method, the wood is about 3,450 years old, around the time of the Shang Dynasty (1600-1046 BC).

Why was the coffin boat-shaped? Man’s funeral customs were derived from the concepts of the soul. The body is dead, but the soul still exists and continues to keep in touch with the living world. Chinese people have always valued death and funerals throughout history.

Agricultural people chose burial because they wanted to hold a close tie with the soil, while the Nomadic group adopted cremation, as they moved from time to time.

Ancient Wuyi people, who lived by and on water, wanted to live the afterlife in the same way they did in the present. The boat that used to be a living tool was then turned to be a resting place for the soul after death, while the running water underneath offered the same life scenes the deceased had experienced.

How and why ancient Wuyi people managed to lift the coffin, despite the difficulties, to the high cliff cave is still open to debate today.

There are many speculations that seem plausible. One possible reason is they used to live in the rocks and it was natural for them to go back to where they came from.

Another point of view related to Wuyi forefather’s belief in bird and sky. The higher the coffin was placed, the closer they could reach the sky, like a bird.

The high cliff was another staring point for the afterlife, while the boat-shaped coffin functioned as transportation to carry them on their new journey.

We may never knew the whole truth about the historic funeral site but, one advantage of this high-altitude funeral custom is obvious — it keeps the coffin away from the destruction of man and natural disasters.