Photographer Shen Haopeng has gone beyond the call of duty in his latest quest. Call it passion, zeal or even obsession, Shen has braved the elements and shown great fortitude and courage in the face of adversity to take snaps during the coronavirus outbreak.

The 61-year-old has trudged the Shanghai streets for the past decade capturing scenes from the city’s Spring Festival celebration. And he was determined to snap The Year of the Rat despite the dangers posed by the epidemic.

Shen wandered around the streets of “An Empty Shanghai” with camera in his hands. He took every preventative measure to restrict the virus spread, while snapping his black-and-white photos, to capture a unique ambience in the big metropolis.

“It is such a rare chance for a photographer,” Shen said. “Perhaps a once-in-a-life time opportunity.”

Born in Shanghai in 1959, Shen is a renowned photographer and designer. He is a visual director for several local newspapers and fashion magazines. His pictures have been widely collected by museums and private collectors around the world.

Last year his solo-exhibition “The Phantom of the World” was curated by Gu Zheng, one of China’s top art critics in photography. It was held at YIBO Gallery at M50 and received high accolades from the art community.

“Believe it or not, that was my first solo-exhibition,” he said. “For me, it was more than a retrospective show, but rather a revealing of my pondering in the past three decades.

“To be more exact, it is more like self-discovering, though in quite a slow way, in the interpretation of the world of the people in the past three decades.”

The subtle changes of light and shadows, an intricately designed arrangement, plus some hidden metaphors are particularly impressive, because these pictures conjure up a complicated mix of emotions that can’t be described in words.

“In my eyes, there is not right or wrong in the expression mode. A good photograph captures an instance that is frozen in time and should communicate a story to inspire the future,” he said.

“I like photographic elements that might differ from other media. If viewers can empathize with visual images through my lens or the temperament of the picture itself, then this is a reward for me as a photographer.”

Q: What encouraged you to step out from the safe haven of your home and go out on the Shanghai streets despite the dangers posed by coronavirus?

A: This largely accounted for my news sensitivity acquired from years of journalism experience. Moreover, such an empty city scene could be rarely encountered in one’s life and it would be quite meaningful to record them in my lens.

Q: Did you ever feel a moment of fear when walking alone on the Shanghai streets? Was your family opposed to this?

A: At the beginning, my family was quite concerned about this, but I persuaded them that I would take all the necessary personal precautions and protection, such as avoiding indoor and crowded places.

In fact, I thought it was safe on the city’s streets. Starting from January 27, I usually spent half a day out. I didn’t go out every day, depending on the weather. I wanted to capture the city on cloudy and clear days.

Q: In your eyes, what is the charisma in black-and-white pictures?

A: I prefer black-and-white pictures. That is my personal style. Since the 1980s, I worked in the local newspaper industry. Through years of experience in reporting and editing, I grasped the skill of developing black-and-white photos.

However, I also take some colored pictures when the days are clear. In my eyes, a colored picture should render a monochrome visual effect while a black-and-white one should be used for a sense of color.

There is an old Chinese saying that black inks include a combination of five shades of hues; likewise, black-and-white pictures could be fused with multiple layers and colors.

Black-and-white is in essence more pure, while at the same time evokes a more profound feedback.

Q: Did you remember the first photo you took during the epidemic and what triggered you to click?

A: It was at the Bund, because the Bund is an iconic place, which both physically and spiritually stands for Shanghai. It has a unique grace and dignity in this unique time. I felt both calm and excited by the time I pressed the button.

Q: Which areas have you been to?

A: I wandered from the neighborhood of the Bund, the Yuyuan Garden, People’s Square, Xintiandi, the Xujiahui area, Hengshan Road, Nanjing Road and from Xizang Road to Suzhou Creek, and Lujiazui as well.

Q: Do you think that the outbreak of the coronavirus will change the ways that you see life and art?

A: No, because I always think that human beings should have a respectful attitude toward nature. Resources on earth are meant to be used not exploited. We share the resources of nature with other living beings, starting from microorganisms to other human beings.

But the novel coronavirus outbreak made me see that art is a plaything in heydays, but useless and powerless in the time of disaster.

Q: Can you use three words to describe the empty Shanghai from your lens?

A: I would say “silent, melancholy and generous.” 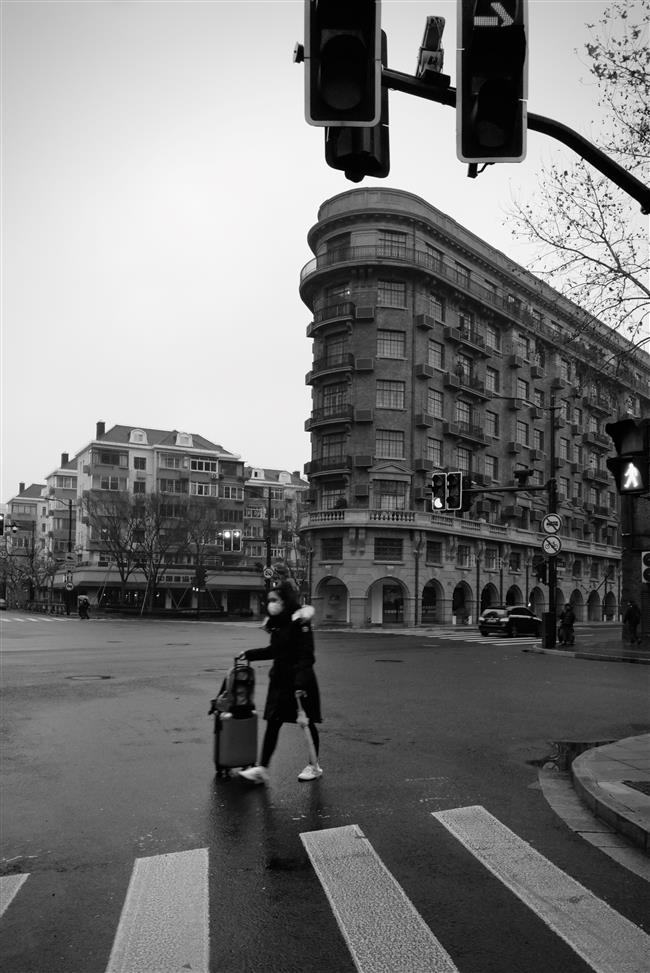 Special Reports
ADVERTISEMENT
61922
,
61924
,
Photographer snaps city life amid epidemic
Rodent theme at museum celebrating Year of the Rat
Seizing on every gimmick, bookshops try to turn the page after epidemic
Surrealism in 15th century China
Artists pay homage to heroes in harm's way
Wuyi hanging coffins mystery
Online art auction 'Stand Together' in the time of novel coronavirus threat
Online treat for Shanghai's music lovers
As the nation walks on eggshells amid virus, an artisan carves them
Bronze burners as superb as the incense they emit
EXPLORE SHINE