The 22nd China Shanghai International Arts Festival has announced 11 performances and events for this year’s artfest, scheduled to run from October 16 to November 15.

A video-link ceremony was held at the festival’s Shanghai office this week, bringing together representatives of 10 troupes and organizations from 10 countries for virtual contract signings. It was held in cyberspace because of ongoing controls related to the novel coronavirus outbreak.

The ceremony was hailed as a positive sign that the performing arts are set to return to normal once the threat of the virus has passed.

“Cultural and performing arts have been suspended since the outbreak of the epidemic,” said Li Ming, vice director of the festival’s organizing center. “We are expecting an early recovery, and we hope this video signing ceremony will help boost the confidence of performers, audiences and arts devotees around the world.”

The line-up for this year’s festival includes “The Taming of the Shrew” by Les Ballets de Monte-Carlo, “Romeo and Juliet & Mixed Programs” by the American Ballet Theatre, modern dance “Redd” by the British troupe Boy Blue, “Adolescent” by France’s Ballet du Nord, and concerts by Germany’s Staatskapelle Dresden and New Japan Philharmonic.

Performances announced for the festival’s Artspace program include a concert by the Tokyo Trumpet Ensemble, “Amalia--Independent Heart” by the Fado Festival, “Creation/Orphee et Eurydice” by the Yen Han Ballet Co, and a concert by Serbian artist Nemanja Radulovic and his Devil’s Trills troupe.

A Lithuanian Culture Week will be held from October 30 to November 10.

While Li was signing the contracts at his Shanghai office, representatives of the 10 foreign partners faced cameras as they simultaneously put their names on the contracts. 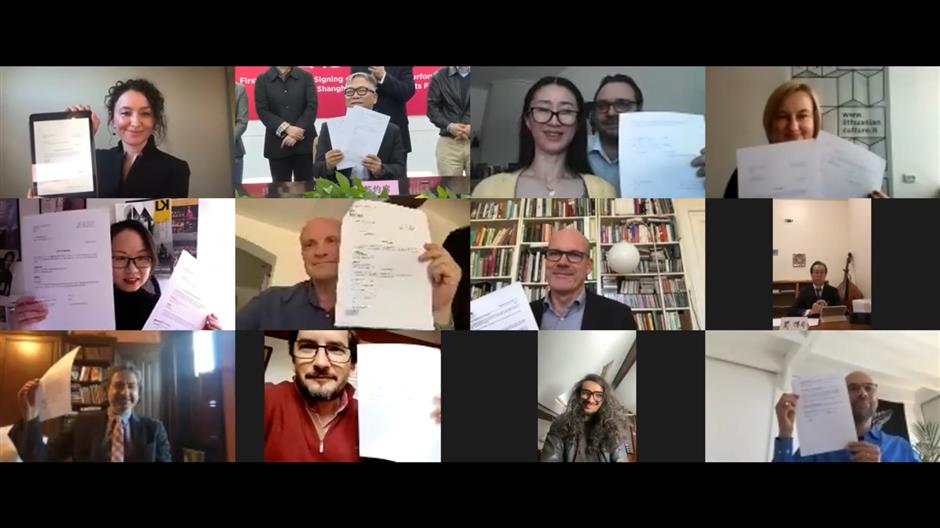 Representatives of the festival's foreign partners face cameras as they simultaneously put their names on the contracts.

“This is a way of saying things are going on!” Jean-Christophe Maillot, choreographer and director of Les Ballets de Monte-Carlo, said after signing the contract in his Monaco office.

Maillot and his troupe will be making their seventh visit to Shanghai this October.

“We have performed at the Shanghai Grand Theater, and Shanghai has always made us feel at home,” he said. “After more than 20 years of cooperation, we feel a special connection with the Chinese people. I’m very excited about this signing because it’s the first time since quarantine that we finally have something positive for the future.”

Maillot said his troupe’s daily operations have been suspended due to the epidemic. Rehearsals are expected to resume by the end of April.

“This has all been a bit scary, to be frank,” he said. “Life is stopped, and we don’t always know what is going to happen. But we are heartened by China’s experience in stemming this virus. It’s a very complicated issue, and we must all remain serious and careful.”

Maillot said the break from work has been especially hard on dancers confined to their homes.

“For them, it’s almost like death because they can’t practice as usual to keep their bodies in tone,” he said. “There is nothing we can do but wait. But trust me, when we arrive in Shanghai in October, the dancers will be ready and in top form. I believe that life will return to normal by then. Decisions made by politicians in Europe will make it possible for life to start to resume here by the end of May.”

“I think the Chinese organizers have created something that other festivals could follow under these special circumstances,” he said. “Due to the virus, the cultural industry has been among the first to suffer. But to go to theaters to watch concerts and dance is a way to help people stay positive about life.”

He added: “As for the Shanghai festival, everything might not be exactly like before, but it will be presented in a very positive way.”

Other foreign partners of the China Shanghai International Arts Festival also sent their regards through video.

“The last two months were quite surreal for the world because of the coronavirus epidemic,” said Yesim Gurer Oymak, director of the Istanbul Music Festival. “But having seen the rapid action taken by the Chinese government, we are all sure that China will overcome the disease very soon. It has really done that in a very short time and with a great determination.”

Oymak said the Istanbul Foundation for Culture and Arts signed an agreement last year for artistic and professional exchanges with the Shanghai International Arts Festival.

“This year, we are all looking forward to welcoming Chinese artists in Turkey and hope to send Turkish artists to China,” she said. “This is a time for solidarity, wisdom and reflection. We are all in it together.”

According to the Shanghai festival organizer, more video signings will be organized as part of ongoing preparations for the festival.