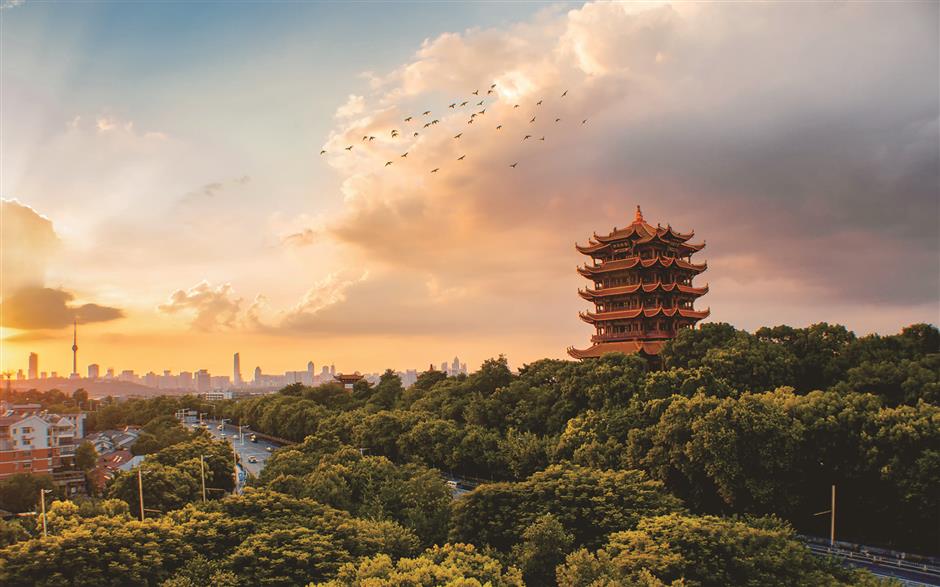 The Yellow Crane Tower, Wuhan’s most famous landmark by the Yangtze River, shines once again after an unprecedented 76-day lockdown on the city to contain the coronavirus outbreak.

The Yellow Crane Tower, Wuhan’s most famous landmark by the Yangtze River, shines once again after an unprecedented 76-day lockdown on the city to contain the coronavirus outbreak.

Sitting on the top of the Sheshan Mountain, the five-story tower overlooks the Yangtze River running below, while high-speed trains running on the Beijing-Guangzhou Railway roar past underneath.

The modern Yellow Crane Tower is supported by 72 giant posts and decorated by more than 100,000 yellow glazed tiles on the exterior wall with 60 large cornices extending to the sky.

Its beauty is magnified by a number of auxiliary buildings, such as pagodas, archways, corridors and pavilions. The big bronze yellow crane standing at the entrance suggests how the tower got its name in a well-known legendary tale.

It says the place was once a small wine shop run by a local man surnamed Xin. One day a beggar in rags came to ask for a cup of wine, and the warm-hearted host offered him a big bottle. The beggar came every day for half of year, and Xin treated him without complaint or slight.

“I don’t have money to pay back, but I have something else for your kindness,” the beggar said as he picked up an orange peel from the broken basket and drew a crane on the wall.

The moment he finished, the crane flew out and danced in the middle of the air to the sound of guests’ hand clapping. Hearing about the magic animal, locals rushed to buy wine and pay to see the crane show.

Gradually the little wine shop developed to the biggest restaurant in town, and Xin amassed great wealth. To express his gratitude, Xin built a tower by the Yangtze River named after the crane and painted it with yellow-colored orange peel.

The mythology gives the architecture a poetic and legendary flavor but, in reality, the tower was first built in AD 223 as a military watchtower. 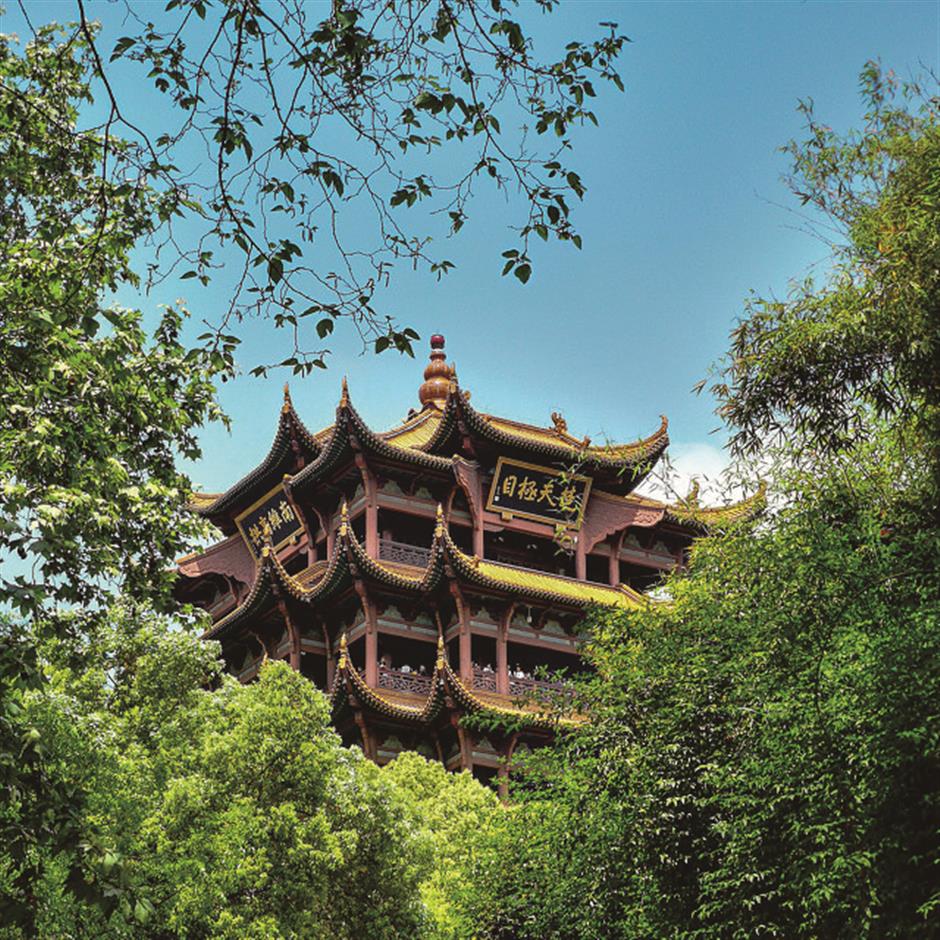 If you climb to the top of the Yellow Crane Tower you can have a bird’s-eye view of Wuhan City.

In the Tang Dynasty (AD 618-907) it was destroyed and rebuilt many times in civil wars. In the Northern Song Dynasty (960-1127), the Yellow Crane Tower became a Taoism worship place.

However, the ill-fated building was dismantled seven times in the Ming (1368-1644) and Qing dynasties, and the penultimate one was reconstructed in 1868 and destroyed in 1884 in a big fire, and only a bronze rooftop survived.

Visitors can have a quick glance of what the past several towers looked like on the second floor of the building, where architecture models of different times are on display.

During the Tang Dynasty, the tower with only two stories was rough and simple in structure with a primitive and powerful feeling, while the architecture in the Song Dynasty evolved into a complex, composed of the main building, the platform, the porch and the gallery in an exquisite and elegant artistic style. In the Qing Dynasty, one more floor was added to the tower in a design that integrated Chinese traditional astronomical calendar culture into it.

In 1957 the original site of the tower gave way to the construction of the Wuhan Yangtze River Bridge’s approach bridge. In 1981 when the local government decided to rebuild the Yellow Crane Tower, it was moved to the peak of the Sheshan Moutain, about 1,000 meters away from the original site.

Known for the poetry of several celebrated Chinese poets such as Cui Hao (AD 704-54) and Li Bai (AD 701-62), the Yellow Crane Tower has a room on the third floor that is specifically reserved for the notes of visiting poets.

If you climb to the top of the tower you can have a bird’s-eye view of Wuhan City and the ever-flowing Yangtze River. The Sheshan Mountain has been reinvigorated, next to the Yellow Crane Tower Park, by almost 100 species of precious flowers and trees.