A magnet for the city’s trendsetters, the exhibition “The World of Anna Sui” is on display at the Modern Art Museum Shanghai through the end of August.

In the eyes of many, Sui is not only a fashion designer but also an artist adept at incorporating pop-culture phenomena into fashion.

Born in 1955 in Detroit, Michigan, Sui studied at Parsons School of Design. She began working in the fashion industry before graduating.

Her career spans more than four decades, from her blockbuster early collections in the 1980s that broke away from stereotypical classic fashion to her first runway show in 1991 that attracted many top-tier models. 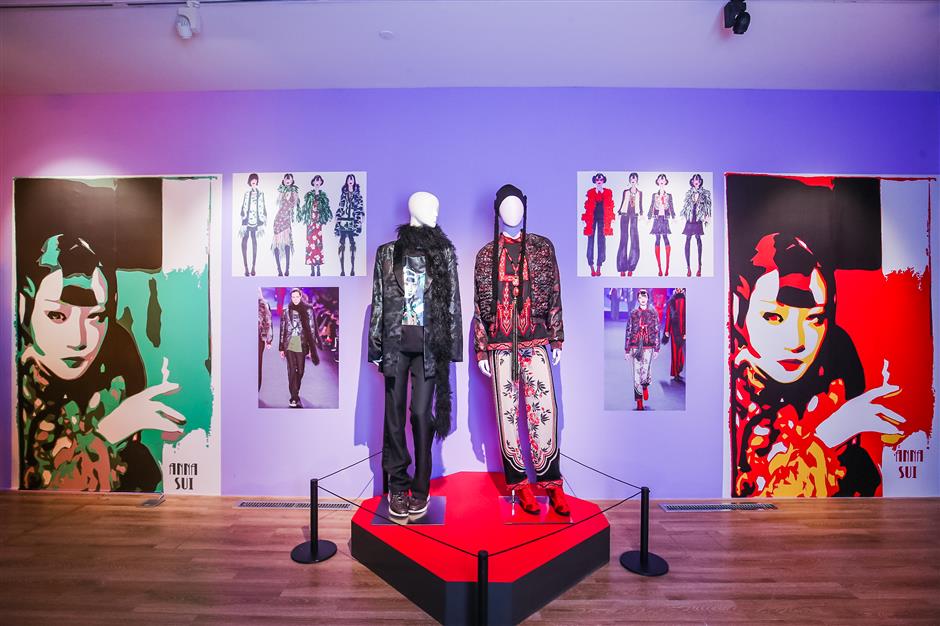 The exhibition “The World of Anna Sui” runs through August.

This exhibition brings together 13 archetypes of her iconic signature, such as Mod, Punk, Schoolgirl, Hippie and Nomad, revealing the interaction between her designs and the evolution of pop culture.

Purple seems to be one of her favorite colors, widely used in both the exhibition hall and costumes she’s designed.

Meanwhile, five mood boards that capture her creative inspirations are presented along with invitations for Sui’s fashion shows. Designed by artists such as Dean “Chooch” Landry and Jeffrey Fulvimari, these invitations, similar to an illustrated piece, render a visual reference to the development of her designs throughout her career.

As one of the top New York-based designers who greatly influenced American pop culture, Sui was twice awarded by the Council of Fashion Designers of America (CFDA), considered the “Oscars” of the fashion world in recognizing the fashion industry’s top creative talent.

In 2010, she was named one of the “Top 5 Fashion Icons of the Decade” by Time Magazine, and in March 2020, she was awarded the Medal of Honor for Achievement in Fashion by the National Arts Club.