Artists from the China Academy of Art draw portraits of 40 female medics from Sir Run Run Shaw Hospital, who were dispatched to Wuhan to fight against the novel coronavirus outbreak. The activity hosted by the Zhejiang Art Museum aims to express local residents’ great gratitude to medical staff.

Artists from the China Academy of Art recently drew portraits of 40 female medics who were dispatched to Wuhan, former epicenter of the novel coronavirus outbreak, from Sir Run Run Shaw Hospital in Hangzhou.

The activity was hosted at the Zhejiang Art Museum, giving local residents an opportunity to see the real faces under face masks and say “thank you” to those who battled against COVID-19.

“We hope to express gratitude to their contribution to the fight against the novel coronavirus and give the public a chance to take a closer look at our heroines,” said Ying Jinfei, curator of the Zhejiang Art Museum.

Some of the portraits are now on display in the exhibition “See Her Face" through July 5 at the museum, along with other paintings themed on Hangzhou’s efforts against COVID-19 outbreak.

“The hospital dispatched 189 doctors and nurses to Wuhan. The number ranked first in Zhejiang Province. And 80 percent of them were women,” said Zhuang Yiyu, vice president of the hospital.

Doctor Wu Xiaohong, deputy director of the hospital’s respiratory department, was dispatched to Wuhan on the first day of Chinese Lunar New Year. She was one of the first team members in Zhejiang to leave for Wuhan.

“I really appreciate this portrait activity. It means everything is going back to normal,” said Wu. “We should cherish such an ordinary life.” 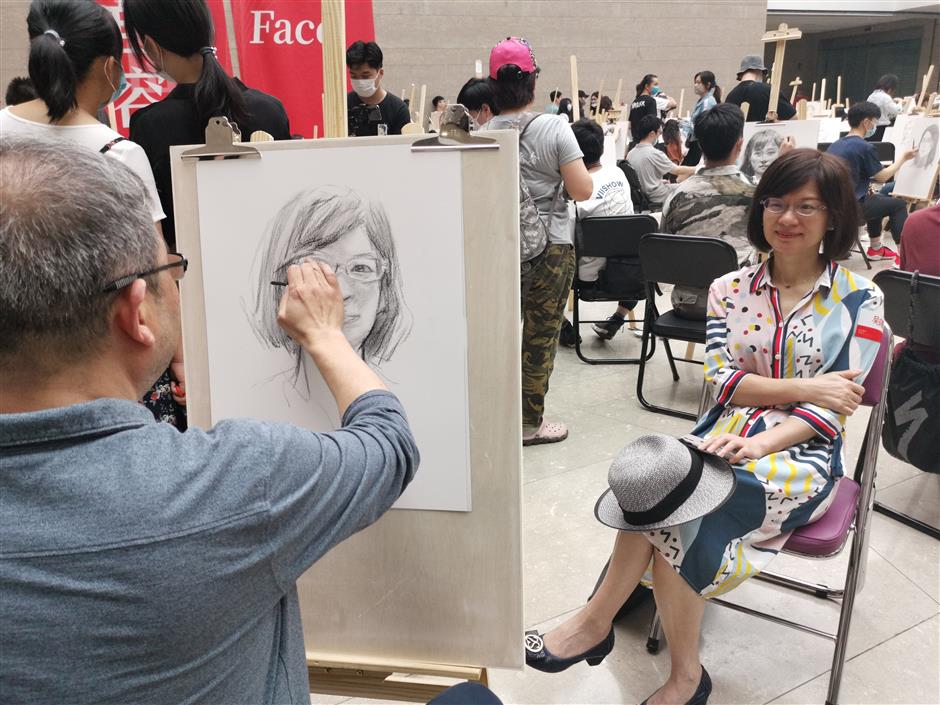 During some 50 days, Wu led a medical team consisting of 147 doctors and nurses and treated 290 COVID-19 patients at Wuhan No. 4 Hospital.

“We had really tough days there, especially for the female nurses. They worked in shifts and had to wear adult diapers in case they needed to use the toilet. Almost everyone suffered physiological problems,” Wu told Shanghai Daily.

Nurse Wang Haonan supported the intensive care unit of Jingmen No. 1 People’s Hospital in Jingmen City, Hubei Province. The temporary ICU was established on February 25 and closed on March 24.

“On my arrival, I received training for two days on self-protection and treatment,” said Wang. “I often felt dizzy and could not breathe when wearing a protective suit, and a face drenched in sweat enhances infection risk.”

It took every medic about 30 minutes to put on a protective suit, including goggles, shoe covers, layers of gloves, a medical cap and at least two masks, ensuring that every inch of skin was sealed.

Because of their equipment, medical workers couldn’t eat or drink for almost eight hours a day. The tight goggles left deep marks on their faces, and later caused skin rashes which severely impacted sleep at night.

“When I was going to leave for Wuhan, I knew every local hospital was short of medical supplies, and life was going to be tough. To reduce daily trouble, I cut my long hair before leaving,” said Wang.

Doctors and nurses had to move patients to different departments for physical checks every day. Some patients suffered mood swings, so medics even played musical instruments to calm them down.

“All of them were given ECMO (extracorporeal membrane oxygenation) treatment. I was in awe of their strength and really touched,” said Jiang. “Human beings might be insignificant, but they are also great.”

During the outbreak, the hospital used high technology to offer remote medical consultation to their colleagues in Wuhan.

For instance, doctor Shen Lihua treated a patient who got infected several days after a kidney transplant. The patient’s depression complicated the illness, making the matter worse.

The hospital set up a medical team consisting of psychiatrists in Hangzhou to give therapies to the patient via online medical consultation.

Zhejiang dispatched 2,018 medics to Hubei Province, and the last medical team returned home on April 3 as the novel coronavirus outbreak winded down in the hard-hit region.

No infected cases were reported among the dispatched medical workers.