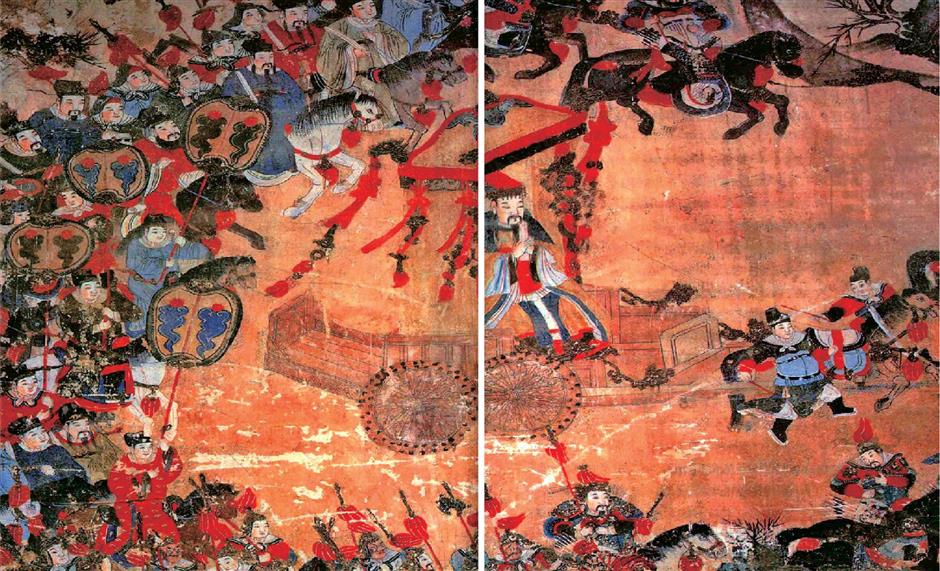 On the three walls of Tiankuang Hall, the main part of the Daimiao temple in Shandong Province, there is a huge mural which is 62 meters long and 3.3 meters high. The mural features two God of Taishan Mountain scenes.

Last week’s Now and Then column revealed the splendor of the Daimiao Temple, which is the largest and most well-preserved architectural complex on Taishan Mountain. This time, let’s explore its cultural value through a huge mural in the temple.

Taishan Mountain, located in the north of Tai’an City in Shandong Province, is said to be a home to many ancient China’s sacred deities.

Constructed in the Han Dynasty (206 BC-AD 220) to worship the God of Taishan, Daimiao Temple covers an area of 96,000 square meters.

The Taoist temple is designated as one of the four most famous ancient architectural complexes in China, along with the Forbidden City in Beijing, the Mountain Resort in Chengde, and the Temple of Confucius complex, the Confucius Family Mansion and Cemetery in Qufu.

Tiankuang Hall, 49.7 meters long, 19.73 meters wide and 22.3 meters tall, is the main part of the temple. With its eight bright red pillars and double-eaves cladded with yellow glazed tiles, the hall houses a God of Taishan statue. Above the shrine, there is a plaque inscribed with four Chinese characters peitian zuozhen, which was written by Emperor Kangxi (1654-1722) in 1684 when he visited Taishan Mountain.

On the three walls of Tiankuang Hall, there is a huge mural which is 62 meters long and 3.3 meters high. Featuring 697 figures, the mural features two God of Taishan Mountain scenes. One, called qibi tu, depicts the god going on royal inspection. The other, named huiluan tu, depicts the god returning to his palace.

God of Taishan Mountain is painted in the center of qibi tu to show his supremacy. Wearing a yellow robe, he sits on a sedan with two hands holding a ritual tool called gui, or jade blade, which symbolizes authority.

The god is escorted by a large number of people, including imperial bodyguards and scholars. Showing their respect, they look up to the god. Another two sedans take the third son of the god and a Taoist called Yanxi Zhenren.

A group of mythical creatures like kylins and auspicious elephants walk in front of their sedans. An elephant carries a vase, which is a popular decorative arts subject in Chinese culture for its auspicious meaning. In Chinese, the words for “elephant” and “vase” are homonymic with those for “signs” and “peace.” The last part of qibi tu portrays people lining up in the streets to greet the god. Most of them are civil officers. Mythical creatures are also in the crowd.

Both scenes and figures on huiluan tu are similar to those on qibi tu. To show the achievement of the god’s inspection, two images are added to huiluan tu. One shows two yakshas carrying a tiger tied to a pole, while the other is of a camel which carries files on its back.

It is said that the God of Taishan Mountain is a descendant of Pangu, who is widely acknowledged in Chinese legends as the creator of the world.

Another version, which is considered more convincing, says that the origin of the god is associated with a tribe called Shaohao.

Experts believed that the Neolithic tribe belonged to Dawenkou culture, which was found in today’s Tai’an. The people of the tribe worshipped the sun and the mountain. Archaeologists unearthed many cultural relics patterned with the Chinese character “mountain,” based on which some experts believed that the leader of the Shaohao tribe might be a God of Taishan Mountain prototype.

Moreover, the Song Empire also needed to pay an annual tribute of 100,000 liang (4,000 kilograms) of silver and over 200,000 bolts of silk to the Khitans. The people of the Song Dynasty (960-1279) were indignant about the humiliating treaty. To resolve people’s complaints, Emperor Zhenzong decided to hold a sacrifice ceremony called fengshan on Taishan Mountain.

However, not all monarchs were qualified to hold the ceremony. Only those with great achievements were allowed. Since the Qin Dynasty (221-207 BC), merely six emperors did so, including Qin Shi Huang (259-210 BC) and Emperor Wu of Han (156-87 BC). Without exceptional contributions, Emperor Zhenzong’s fengshan was controversial.

Departing from Kaifeng, which was the capital of the Northern Song Dynasty, Emperor Zhenzong spent 17 days on the journey to Tai’an. After the ceremony, he asked people to build the Tiankuang Hall in order to thank deities for their blessings to him.

Based on Emperor Zhenzong’s experience of fengshan, the painters created the mural, through which viewers get a glimpse of the costume and etiquette system of the Song Dynasty.