It’s not often you find a cluster of famous artworks at one exhibition, each created by a renowned figure in China’s modern-art history.

All exhibited canvases come from the collection of Li Hanying, founder of Hong Art Museum.

“I liked painting when I was a little girl, and my family was not rich at that time,” Li recalled. “Sometimes my mom would save money to buy oil and brushes for me. So even as a kid, I had a dream of owning an art museum one day in the future, and now it has come true!”

Born in 1971 in Zhuji, Zhejiang Province, Li, today an entrepreneur, belongs to China’s “nouveau rich.” It is merely coincidental she became wealthy via art.

“It was about seven or eight years ago when I went to Singapore to see my son who was studying there,” she said. “I was at a big shopping mall and bumped into an art gallery where I discovered amazing oil paintings created by Chen Junde (1937-2019). I was so taken by the paintings, which evoked my childhood dream!”

Some call Chen “a master of colors,” as the hues in his works are bold, vigorous and blazing. It is hard to believe some of the most daunting-sized artworks filled with passion and vitality were created by a man in the twilight of his life — the exhibition includes several of Chen’s canvases created when he was in his 70s. His works center on changes in light and shadow, and the subjects are concrete and realistic, imbued with carefree, extroverted brushstrokes. His diaphanous brushwork captures trembling leaves and shimmering water.

Chinese oil painting is said to have been introduced by Matteo Ricci (1552-1610), an Italian Jesuit priest, when he came to China in 1581. Then came Giuseppe Castiglione (1688-1766), whose illusionist approach to painting revolutionized Qing court art during the reign of Emperor Kangxi (1661–1722).

At the beginning of the 20th century, many Chinese artists furthered their studies in Europe and Japan, then returned to China and fused realism, impressionism and modernism in their canvases.

In recent years, many works in Li’s collection have been purchased at top auctions, and she is noted for only purchasing representative works of different eras created by representative figures.

The exhibition’s highlight is a huge canvas created by Chu Teh-chun, who established himself as an abstract artist while studying in France.

Born in a small village in Jiangsu Province, Chu entered the National School of Fine Arts (now China Academy of Art) in Hangzhou in 1935. He initially became interested in traditional Chinese styles but later opted for a more Western approach.

Chu painted natural elements such as wind, water and fire. His canvases are somewhat akin to traditional Chinese calligraphy due to the flow of hues — both visible and invisible — mountains, rivers, caves and waterfalls, flashing by one after the next. 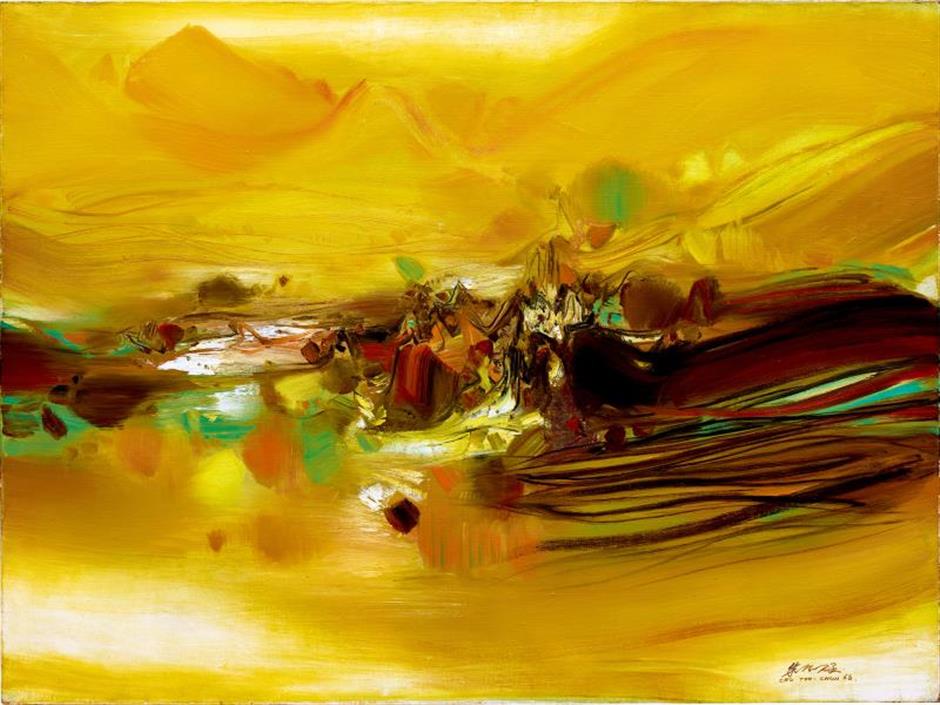 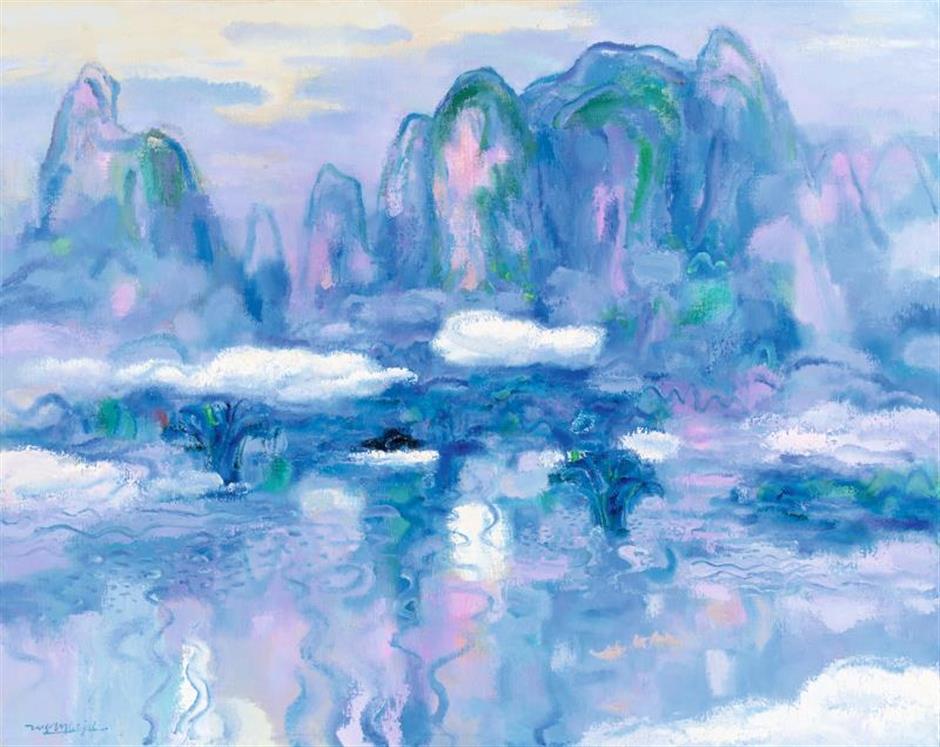 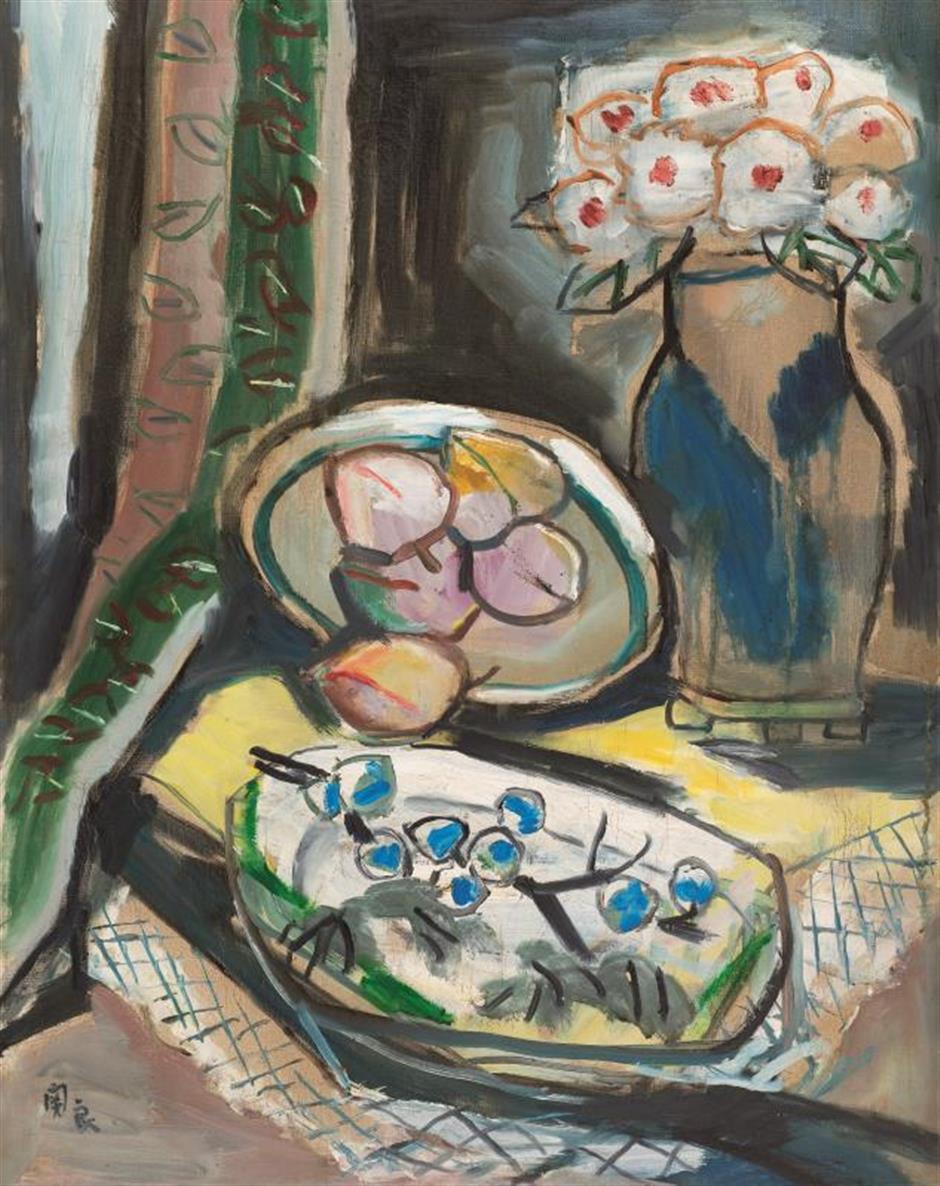 Oil on canvas by Guan Liang in the 1980s