Pavilions in miniature from a master maker 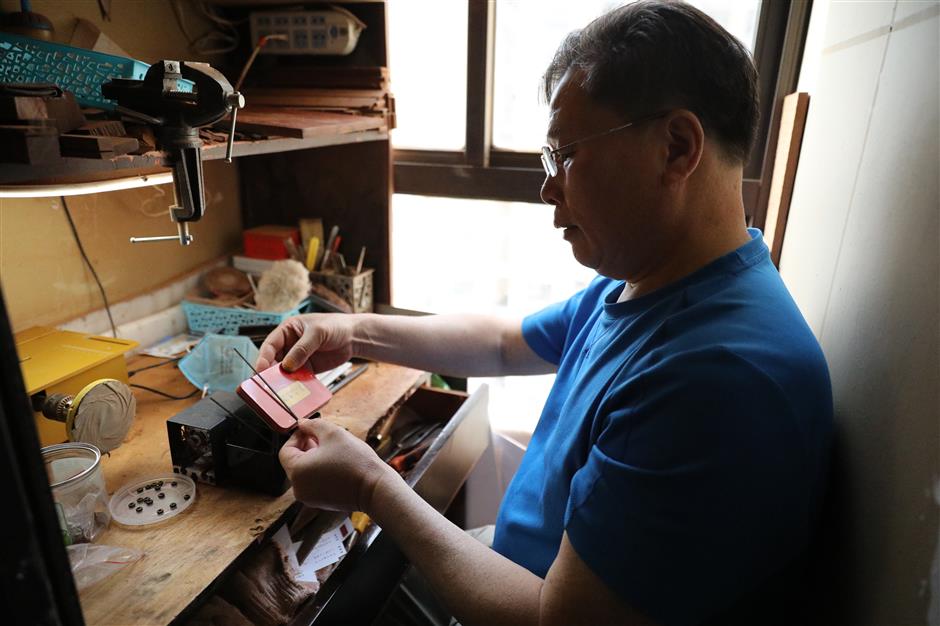 Xu Guanlong didn’t expect that his miniature wooden models of the pavilions in Guyi Garden would go viral and receive so many compliments.

He’s not a professional carpenter, but his interest and perseverance help him make a success of his hobby and find a new way to enjoy his life after retirement.

About two years ago, Xu began to think about what he could do in his spare time after he retired and finally decided to choose from three options — making sculpted reliefs, computer programming and micro wood-cutting.

Nanxiang, home to Guyi Garden, is where Xu was born and raised. Its 10 pavilions are among the original structures in Guyi Garden near which he spent his childhood. So he’s well versed in each location and the paths connecting them.

All his miniature pavilions are made of redwood except for their white walls and are scaled down 50 times compared with the originals. Doors and windows are flexible and can be open or closed instead of being glued together, making them seem more realistic.

“I decided to make a 1:50 size because on one hand, the size can be fit in my cupboard, and on the other hand, this size of models is a challenge for me. I want to try and overcome it,” Xu said. 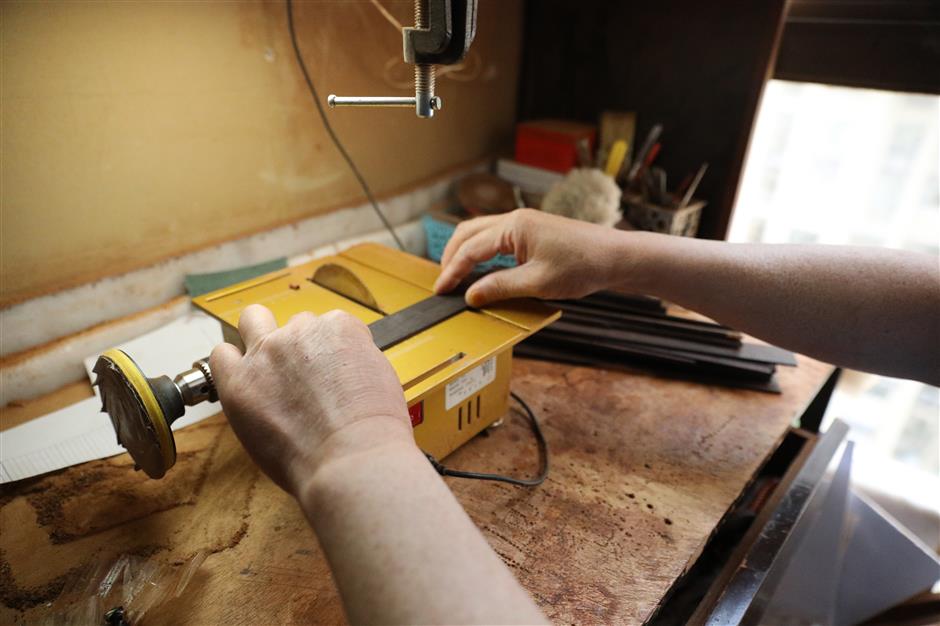 Xu said he preferred exploring computer software, such as making videos, to playing cards or mahjong like many retired people did. Since then he started his “new career” from zero.

To make a pavilion, he visited Guyi Garden frequently to observe the pavilions and take photos from different angles, making sure that he didn’t miss any detail.

For example, of the four cornices of the Quejiao Pavilion (缺角亭) which literally means “losing a cornice,” only three of them are in the shape of fists. The reason is that the northeastern China was occupied by foreign invaders when the pavilion was built, while the fists were designed to show the determination of regaining the territory.

Through observation, he also found the slope of steps in different pavilions had different angles, and exquisite decorations with various patterns were cut on each door and window. 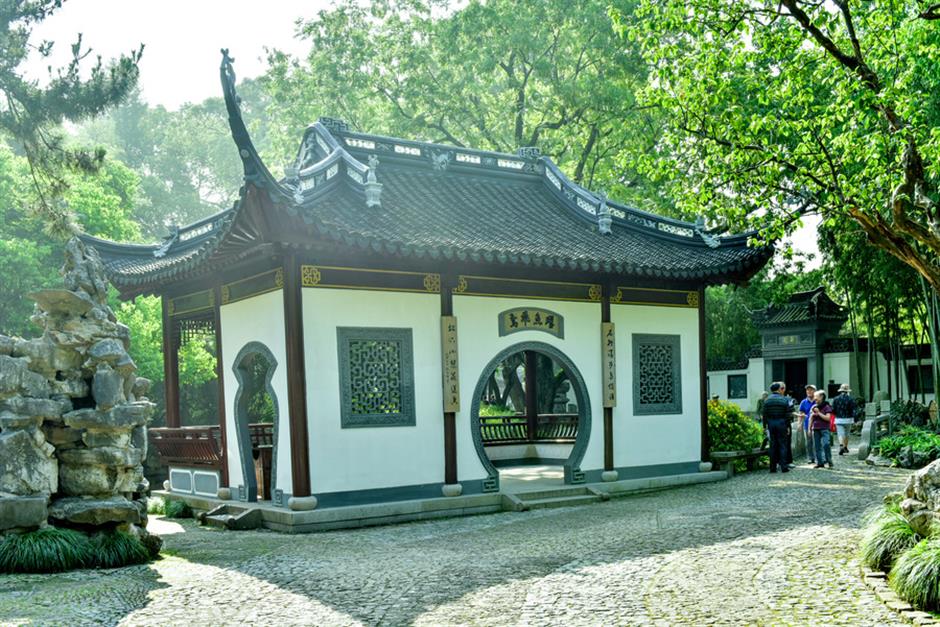 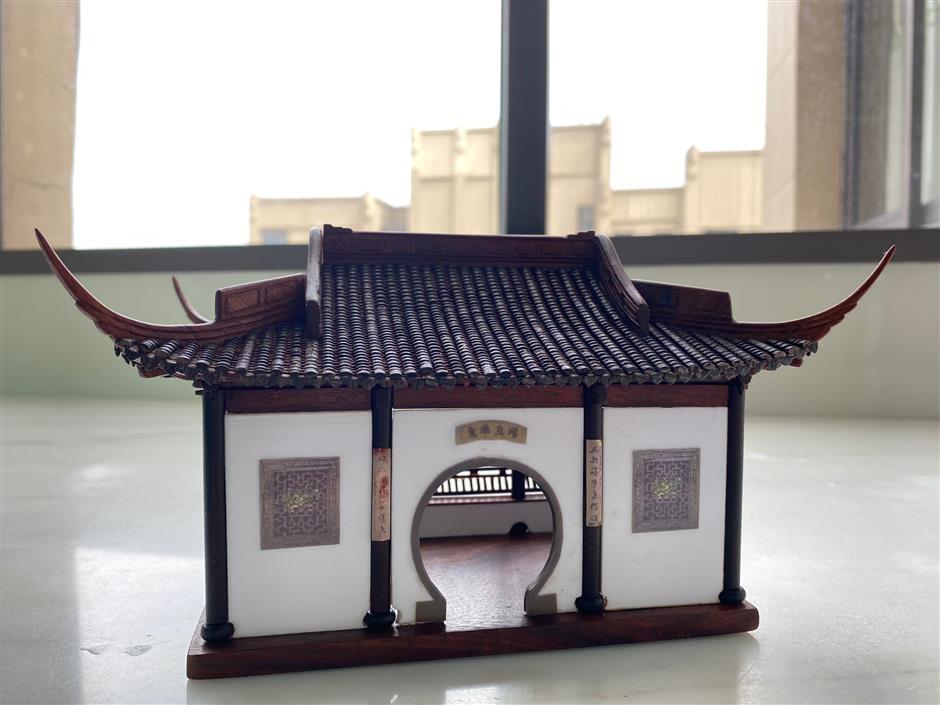 He used a 3-meter-long telescopic pole to measure the size of the structures, the height of the roof and the shape of each cornice.

“It was new to me to build a 3D model on computer, but I was willing to learn new things, and it turned out to be very helpful. As the saying goes — where there is a will, there’s a way,” said Xu.

The work starts from the bottom to the top, making a base first, then pillar bases, pillars, interior decorations, walls and the roof with cornices at last. But some don’t end with the roof.

Taking the Yiye Hall (逸野堂) for example. There are two ornaments — chiwen (鸱吻), which looks like a dragon head with a fish tail — built on the corner of roof with the intention of keeping the house and people safe. All the frames are created with traditional tenon-and-mortise joints, making sure it looks almost the same as the original.

However, cornices and the ornaments are not at all easy to make. The wood to be cut in small sizes results in a brittle material. Also, the cornices on the Buxizhou Pavilion (不系舟) are tangled together, raising the difficulty of making them. 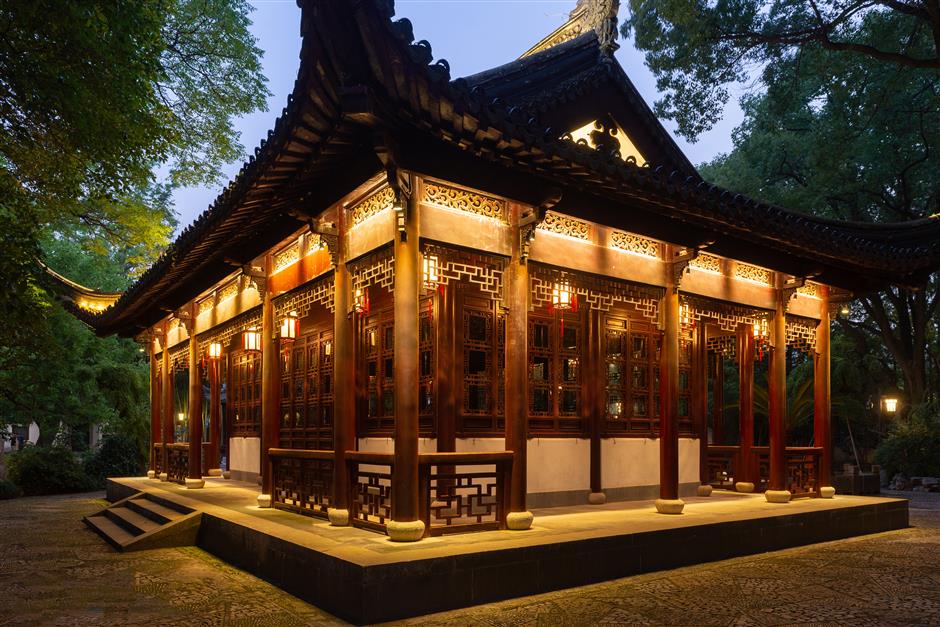 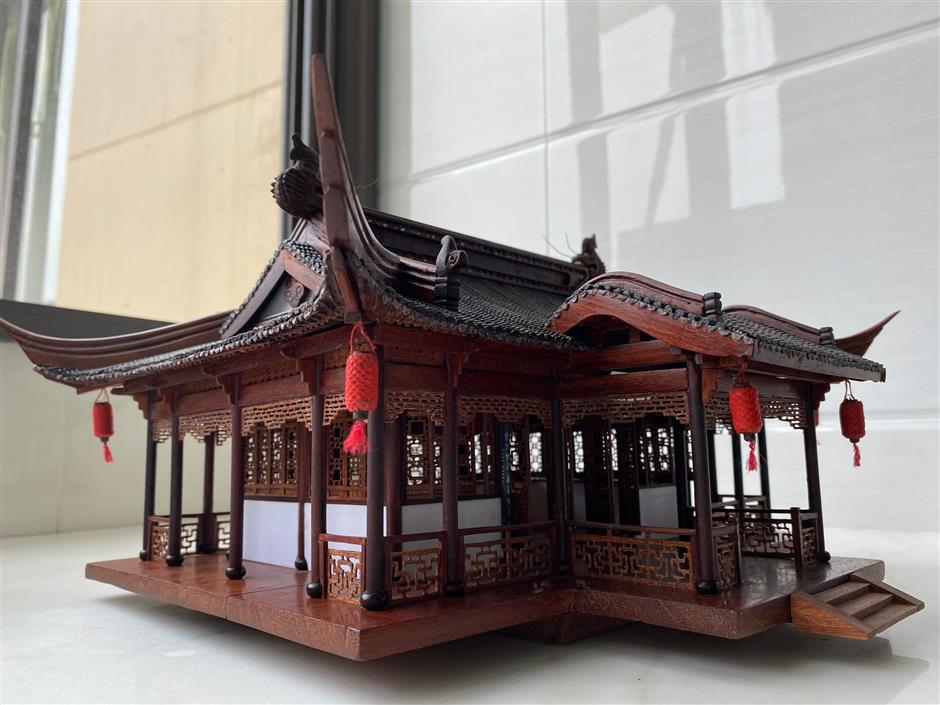 Despite the difficulties, Xu never thought of quitting, but devoted himself to finding a solution. Facing the problem, he tried several ways to cut and found out that the cut had to follow the grain of the wood so as not to break it.

“I enjoy using my brain to deal with problems. It is fun,” said Xu.

Tools play an important role in wood-cutting. A variety of tools including small machine tools, smooth files, nubuck leathers and drills in different sizes are piled on the desk in his 1-square-meter workshop.

The smallest drill is about 0.6 millimeters which is used for carving the patterns on the windows and doors.

Now, Xu is making the ninth pavilion — Plum Blossom Pavilion (梅花亭) which features 50 doors and windows, each with a decorative carved pattern on it. The frames are fine, so he has to be very careful.

“I remember I spent three months finishing the first one, but now I can work faster,” Xu said. “There is no shortcut, but practice makes perfect. You have to believe that once you start to do it, you will make it.”

Xu’s micro wood-cutting attracted the attention of the professionals in the relics protection department of Guyi Garden, as it is going to celebrate its 500-year anniversary in 2022.

The department has made an agreement with Xu to showcase his hand-made pavilions to the public during the anniversary.

“People may ask how much money I can earn from these pavilions. I have to say my purpose is never to make money, but to find something which is good for my mental and physical health to do after the retirement,” said Xu.

Now, Xu has a new plan — to make wooden models of the pavilions in Yuyuan Garden which is in downtown Shanghai after the completion of the Guyi Garden series. 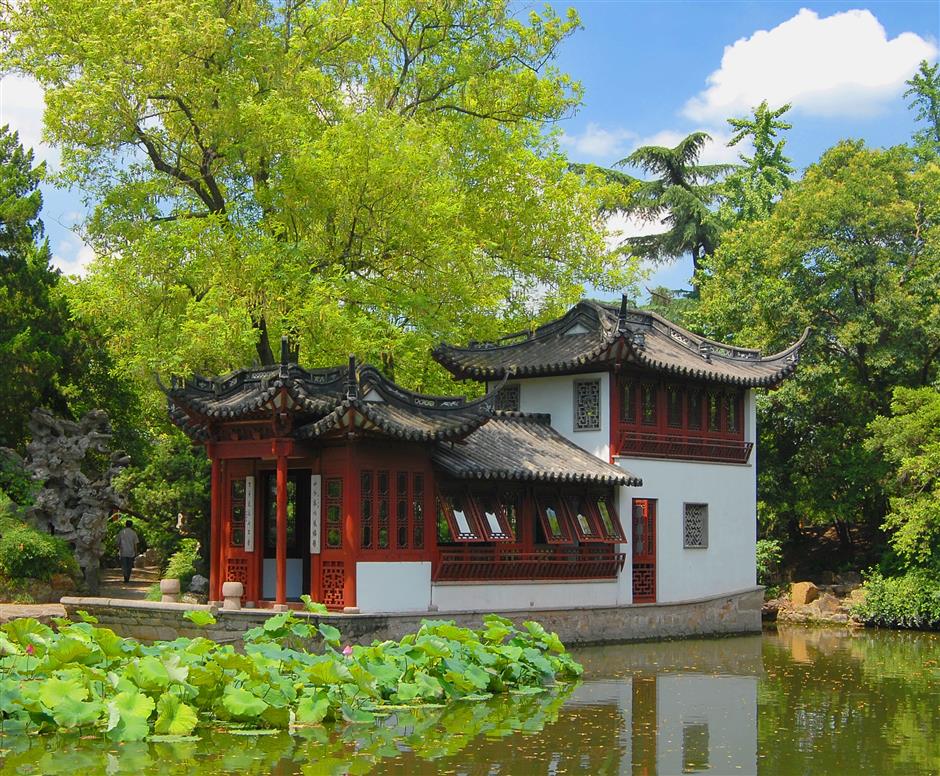 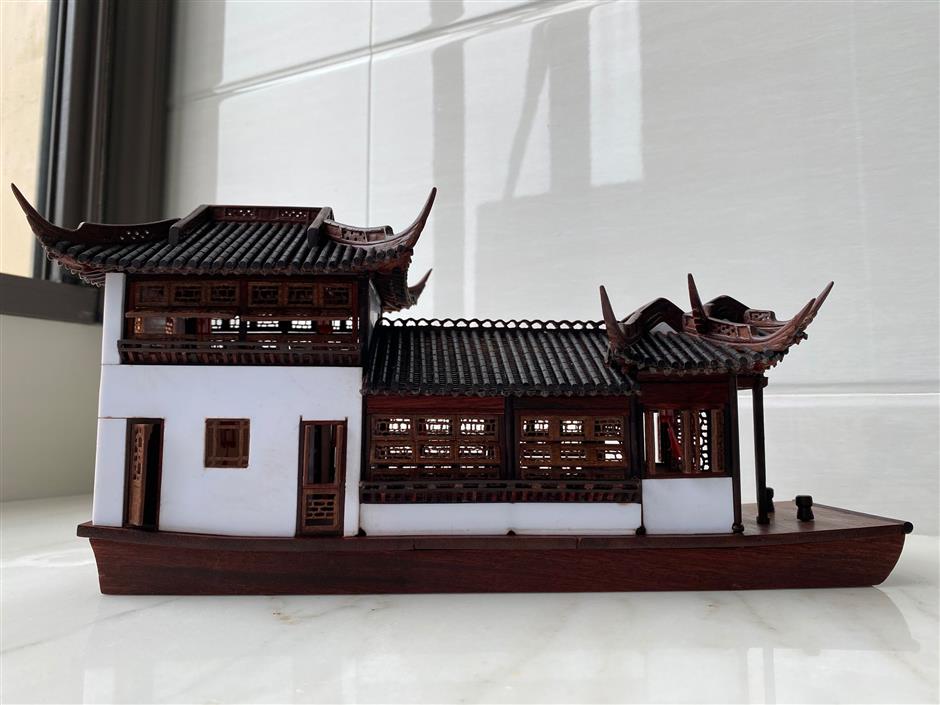