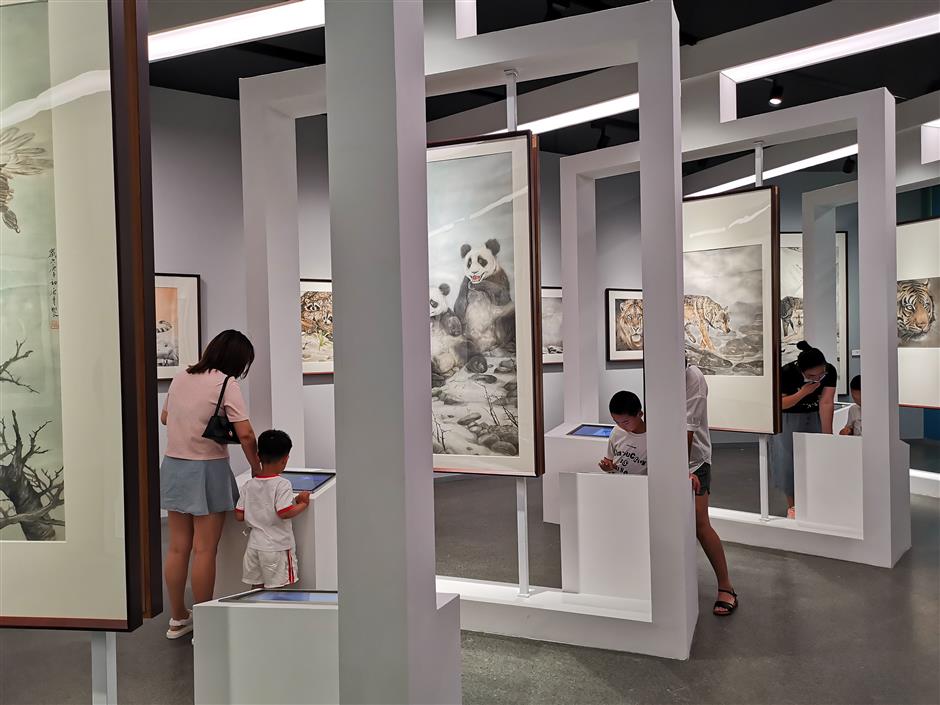 Parents take their kids to visit the exhibition at the Zhejiang Museum of Natural History to enhance the awareness of protecting wildlife. The exhibition will go through August 2.

The COVID-19 outbreak has greatly raised people’s awareness of environmental protection, since the deadly virus is believed to have passed from wild animals to people before spreading worldwide.

To enhance people’s consciousness of protecting wildlife, the Zhejiang Museum of Natural History is hosting the exhibition “Protecting Wildlife, Safeguarding Homeland” through August 2.

Organizers set up an interaction area where children can learn about nature. The museum also invited artist Tang Qing to exhibit dozens of his animal paintings, adding an artistic ambiance to the exhibition.

Tang has been devoted to portraying animals for nearly 30 years. He once spent a year in studying tigers at the Meihua Mountain South China Tiger Breeding Base in Fujian Province.

Some of these tiger paintings are now on display, providing visitors a glimpse of this rare species.

One painting depicts a South China tiger drinking water by a creek. The tiger in the painting is seemingly only one step away from the viewer, which creates an indefinable air of tension.

“I called the painting ‘One Step Away,’ just like the short distance between human beings and wildlife in nature,” Tang told Shanghai Daily. “People should rethink the relationship between wild animals and man. We are equal, and we should respect them from the bottom of our hearts.” 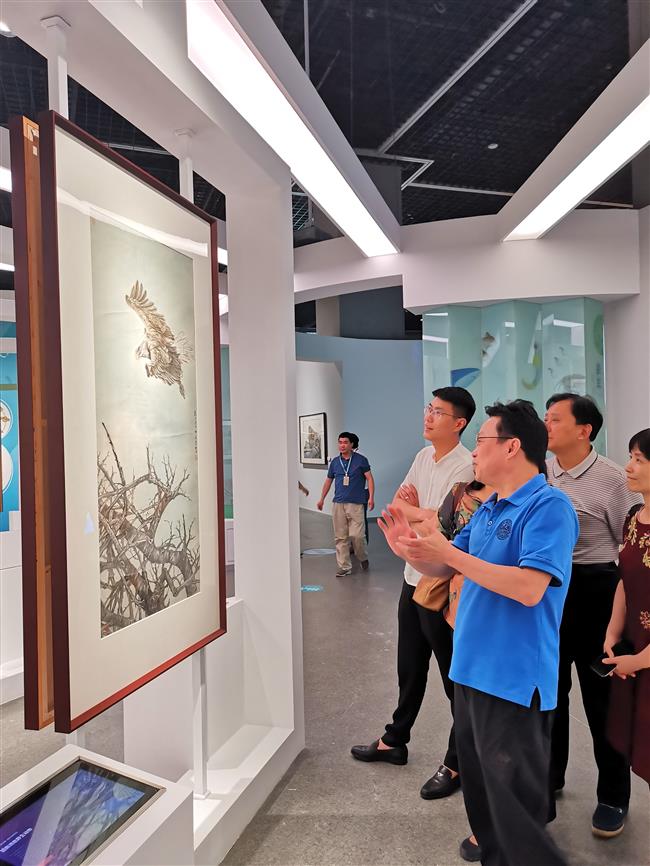 Artist Tang Qing explains one of his animal paintings to visitors.

The specimen of the last South China tiger discovered in Zhejiang Province is also on display. Today, they only exist in breeding centers, as the wild ones were already extinct by the 1980s.

With the novel coronavirus still unfolding, the exhibition provides compelling proof of how our fate is linked with the natural world.

The exhibition lists pandemics that killed countless people throughout history, from the 1918 flu pandemic to Ebola and the Black Death.

Some recent research has suggested the 1918 flu virus may have originated from a nonhuman, mammalian species and then passed to humans.

Bats are a common carrier in nature, able to spread the Ebola virus without being affected by it. Other diseases such Marburg, Hendra and Nipah viruses were all transmitted by them.

The exhibition shows dozens of specimens that were widely believed to be carriers of such viruses, including snakes, monkeys, civet cats, bats, pangolins and pigs.

Showcased are carriers of some of the viruses including snakes, monkeys, civet cats, bats, pangolins and pigs.

The civet was believed to have transmitted the virus of severe acute respiratory syndrome, better known as SARS, to humans in another virus outbreak in 2003.

The pangolin, which was previously used for traditional medicine, was removed from the official Chinese pharmacopoeia list this month. As the world’s most heavily trafficked mammal, pangolins were thought by some scientists to be a possible host of the novel coronavirus.

“The central government is giving increased priority to animal protection. As for our museum, one mission is to spread basic knowledge of nature and build a harmonious relationship between humans and animals,” said Yang Lin, vice curator of the museum.

The exhibition explains to visitors how viruses pass from animals to humans.

People cut down forests, overgrazed grasslands, built roads and expanded lands at a rapid pace, which destroyed natural habitats so that animals have nowhere to go but to human living areas where they might spread viruses.

At the same time, common and endangered species were traded across the world, making it possible to transmit animal viruses among people. Likewise, degradation of marine ecosystems causes blooms of pathogens that can cause potentially fatal diseases such as cholera.

In the exhibition, a clock demonstrates the extinction of animals in history. The tick-tock sound reminds visitors of the disappeared wildlife caused by humans.

Date: Through August 2, closed on Mondays