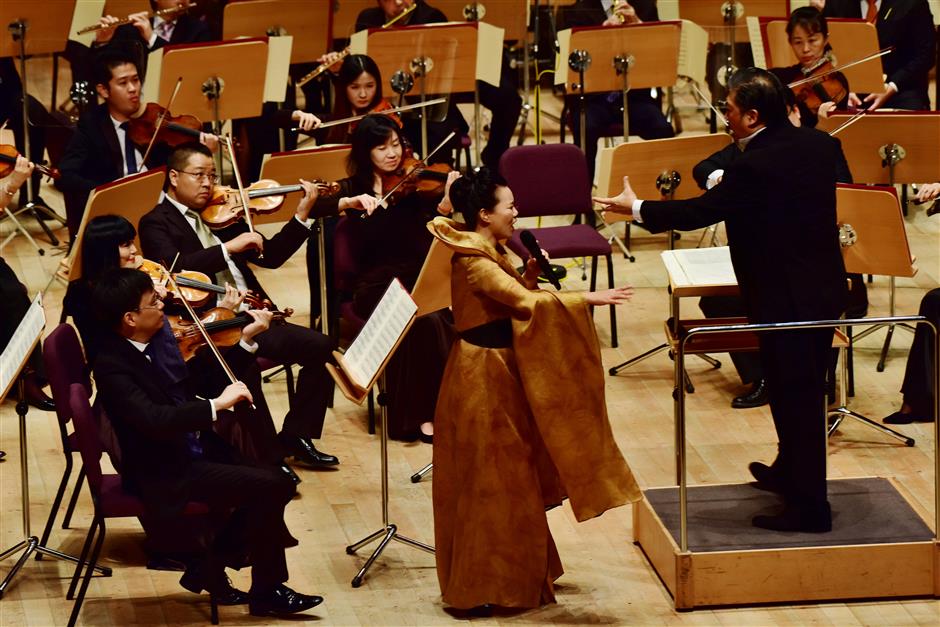 Gong Linna, wearing a golden robe, sings at the opening concert of the 11th MISA at the Shanghai Symphony Hall.

Thunder rumbling, a storm pouring down, monkeys uneasy and howling around. The “mountain spirit,” dressed in fancy leaves and flowers, riding a fiery red panther, awaits her lover on a mountaintop.

“I would bring thunders, storms and howling monkeys into the audience,” Gong Linna vowed to the media before going on stage.

And she did during the opening concert of the 11th Music in the Summer Air (MISA) festival that runs through the end of July. Gong will also be featured with Tan Dun at the closing concert.

Earlier this week at the opening show, Gong, famous for being distinctively Chinese yet impossible to place in any musical genre, wore a long, ritualistic, golden robe as she sang 2,000-year-old lyrics using a variety of techniques drawn from traditional Chinese operas and folk songs. Accompanying her magnificent voice were grand melodies played by the Shanghai Symphony Orchestra (SSO) under the baton of its artistic director Yu Long.

The first collaboration between Gong and the SSO led audiences into the mystical world of deities and romanticism of Qu Yuan (340-278 BC), and revitalized the poet’s recurring desire to remain untainted and honored regardless of the environment.

Prior to the concert, she said the intriguing combination of traditional Chinese lyrics and techniques and a classical symphony orchestra sound leads to “a more magnificent ‘mountain spirit’.”

“Qu Yuan wrote it as a kind of ode to rituals, so I imagine it would have originally been sung by a lot of people in a grand way,” Gong said. “I’m used to singing with my own small band or a traditional Chinese orchestra, so it’s quite exciting to be working with a classical symphony on such songs.”

When she returned to the stage with her encore “Tan Te,” or “Disturbed,” most of the audience members were stunned, while the livestream screen was swept by the pop-up comment referring to Gong as shenpo, or divine woman. Few imagined how this extremely fast-paced song could be played by a symphony orchestra and many were astounded.

Half the audience were awed while the other half betrayed “I don’t understand her music” disapproval. Such division and controversy have been common since Gong’s sudden rise to stardom 10 years ago.

It was “Tan Te” that turned Gong and her German composer husband Robert Zollitsch into household names in 2010. The song was soon billed as shenqu, or “divine melody,” and Gong became the shenpo who sings bold and innovative songs, almost all composed by Zollitsch, better known by his Chinese name Lao Luo.

“Tan Te” has no lyrics. While performing the song, Gong fuses traditional operatic sounds and imitations of traditional Chinese instruments accompanied by facial gestures. It’s described by many singers as a song impossible to imitate.

The unprecedented style went viral instantly, and some netizens even thought “Tan Te” was some sort of prank. So it surprised many when Gong turned out to be a well-trained vocalist with a degree from the China Conservatory of Music. It’s even more surprising her distinctive and highly expressive vocal style in “Tan Te” won accolades from many music professors and professional musicians.

Gong and Zollitsch have said in previous interviews it was a great occasion that “Tan Te” went viral, not because it turned them into celebrities but because it drew a lot of attention to contemporary Chinese musical production.

Whether in classical music or pop songs, Chinese musicians are mostly seen as adopting and exploring Western musical traditions. The couple have experimented with different styles since “Tan Te,” and have continued exploring for the past decade. It’s impossible to put them in any existing categories, but in their minds they are making “Chinese New Art Music.”

There were other innovative songs she had performed. One titled “Jin Gu Bang,” or “Golden Stick” — a magical weapon used by the Monkey King — consists of onomatopoeic words resembling the sound of wielding a stick.

In “Fa Hai, You Don’t Understand Love,” Gong assumed the role of White Snake, the protagonist of the Chinese folktale “Legend of the White Snake.” The story centers on love between a snake and a human, and Gong’s song accuses Fa Hai, the monk who locked the snake away, of not understanding what love is.

For recent years Gong moved on to sing ancient poems with contemporary melodies composed by Zollitsch. Many ancient Chinese poems were originally written as lyrics to be sung, but the original melodies are all lost. Gong was among the first to combine centuries-old Chinese poems with new melodies.

She is now adding a third part — Chinese myths — as she prepares for her next album entirely devoted to mythical heroes.

“Sometimes I look at my kids who love heroes like Spiderman, and I wonder if Chinese kids know about our own mythical heroes like Kua Fu or Hun Dun,” she said. “Do they know we have hundreds of supernatural flora and fauna in the ‘Classic of Mountains and Seas?’

“Still, we are lucky to be contemporary musicians on the shoulders of Chinese culture’s vast history. You can easily trace certain elements and tales from thousands of years ago regardless of whether you’re exploring folk music, literati figures or mythical heroes. There’s so much to explore.”

With a packed tour schedule every year, Gong has rarely had a reprieve like the past six months when almost every concert and theatrical event has been canceled due to the coronavirus outbreak.

Her husband and kids are away in Germany, but Gong stayed in Dali, Yunnan Province, and explored ethnic folk music with nearby villagers.

“During the pandemic, I finally had time to explore more and digest what I’ve learned,” she said. “I used to only value music and singing. My husband would do the cooking and run errands, but since he and our children have been away I’ve had to do everything myself. Interestingly, I’ve started to enjoy the tedious aspects of daily life.”

Gong is also devoting more time to popularizing her vocal-training method, rooted in her rediscoveries of training techniques used in traditional Chinese operas and folk songs. She enjoys teaching her neighbors techniques to improve their singing, such as trembling sounds and high pitch.

“It never made sense to me why our folk singers often practice Western vocal-training kits before getting on stage,” she said. “But you don’t see Western opera singers using vocal training skills from Peking Opera.

“The Western training kit is often considered more advanced because it’s systematic, practical and easy to learn. We have very good training skills in folk music and traditional operas, we just need to rediscover them and put them into a systematic and practical kit.”