Standing gracefully on one foot, stringed pipa on top of her left shoulder, Chen Yining impersonates the gestures of Avalokiteshvara, an iconic bodhisattva with a thousand arms and eyes, as she reenacts long-lost dancing skills of playing the pipa (Chinese lute) behind the back just before the first half of “Buddha Passion” ends.

The piece, composed and conducted by multicultural master Tan Dun, was the final concert of the 10-day Music in the Summer Air festival hosted by the Shanghai Symphony Orchestra. 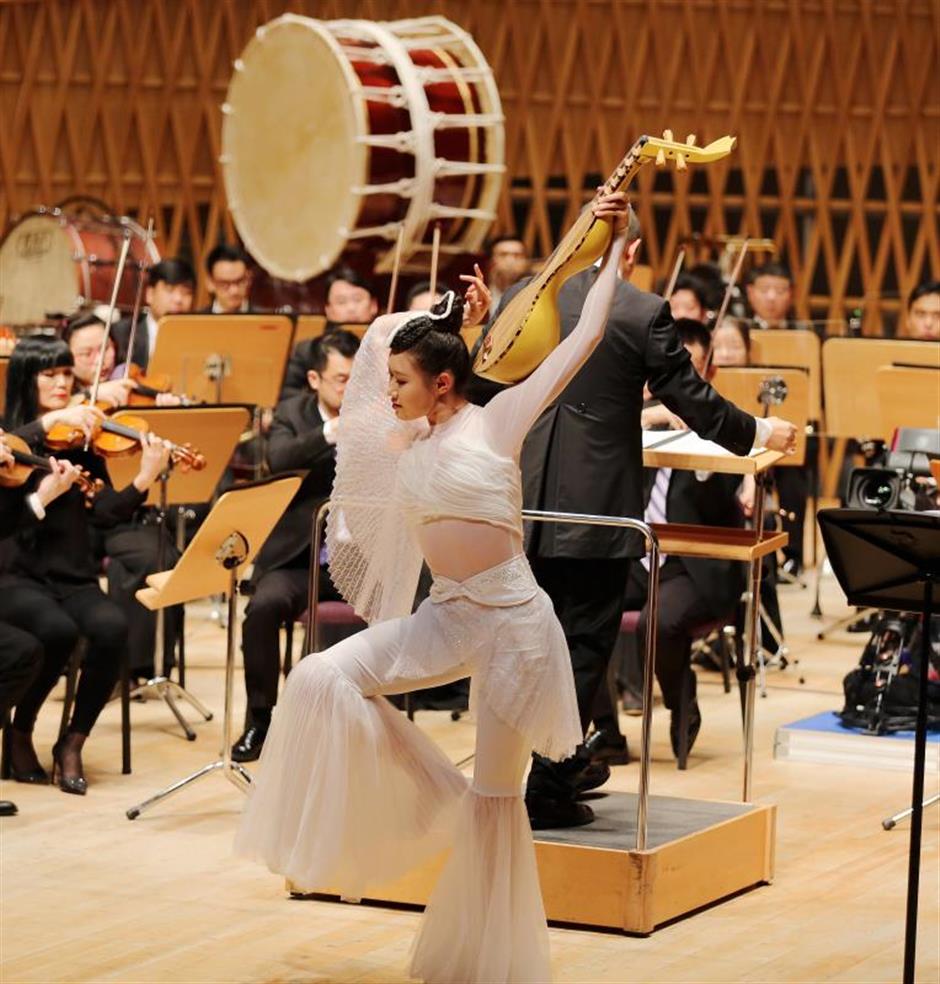 Chen Yining playing the pipa behind the back, a typical dancing posture depicted on Dunhuang murals

It’s the first time every festival concert has been livestreamed, drawing more than 8 million virtual audience members for 21 concerts.

“The pandemic separated us in self-quarantine, but it’s music that connects our hearts,” Tan said. “So it’s even more significant globally and historically to present ‘Buddha Passion’ during the pandemic. Traditional Chinese culture has compassion that resonates with many other cultures. My greatest wish in composing ‘Buddha Passion’ is for the world to have no wars, no disasters, and that everyone can pursue our shared goal — to love both nature and ourselves.”

The composer had just returned from “Tan Dun Music/Medicine Week” in Qingdao where he interchanged the Chinese character of music (yue) and medicine (yao), which have similar pronunciations and images.

“The pronunciations of music and medicine in Shanghai, Hunan, Shandong and Gansu dialects are exactly the same,” he said. “Chinese have learned about the therapeutic functions of music from ancient times. If you look at the traditional Chinese character for medicine, it is the symbol of music with the shape of an herb on top.”

The six-chapter “Buddha Passion” was inspired by the powerful history of spiritual and cultural exchange of Dunhuang, an important outpost of the Silk Road, in northwest China’s Gansu Province, as well as the groundbreaking musical history discovered in the murals of the Mogao Caves from the 4th-14th centuries.

Tan visited the caves 15 times and slept in the Dunhuang Library Cave for a night during the six years it took to compose the piece.

Sung in Chinese and Sanskrit, it’s scored for seven soloists, a choir and an orchestra, adding exotic Chinese instruments, some reconstructed based on the ancient murals.

The piece premiered in Dresden, Germany, two years ago and subsequently toured globally, but Wednesday’s concert marked its first performance by a Chinese symphony orchestra. A choir from Lanzhou of Gansu near the grottoes appeared as special guests.

“Collaborating with the Shanghai Symphony Orchestra makes it feel like another world premiere among my own people,” Tan said.

He recalled his first visit to Mogao Caves where he met archeologist Fan Jinshi, a Shanghai native and third director of the Dunhuang Research Institute. Known as “Daughter of Dunhuang,” Fan spent more than 50 years researching and preserving the remote caves’ murals. 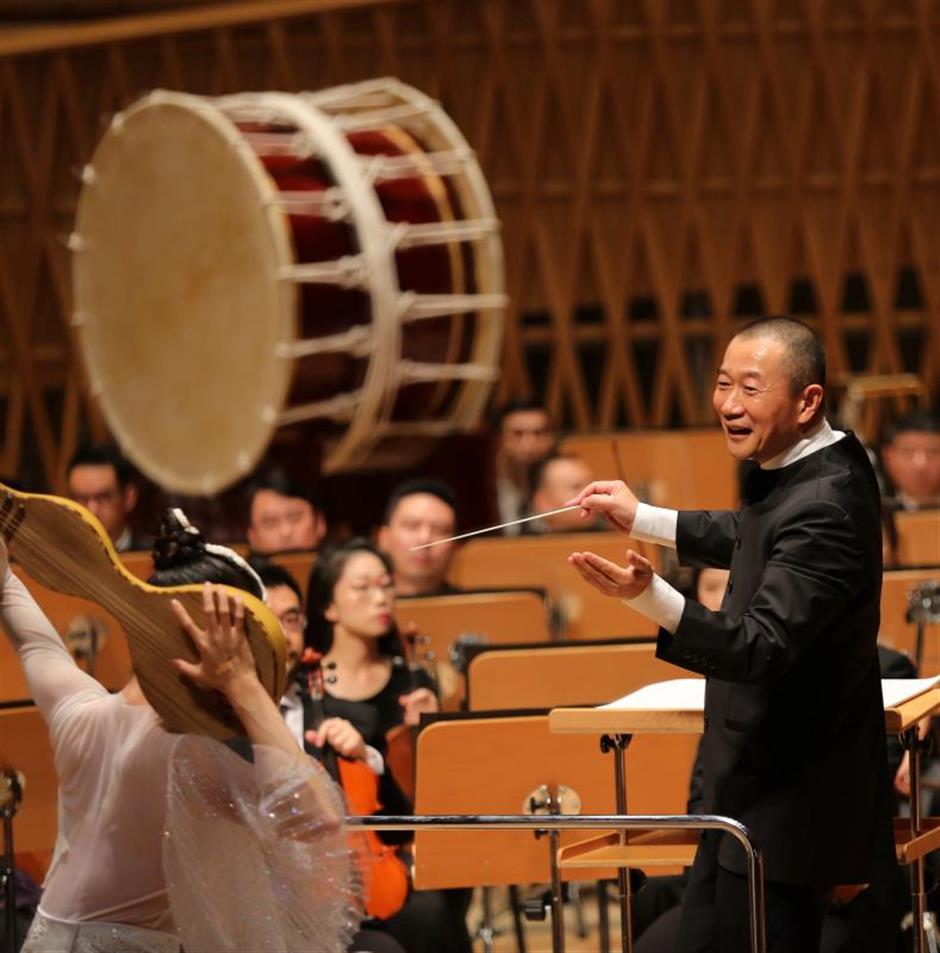 Tan Dun’s “Buddha Passion” weaves stories that have lived in the hearts and minds of the Eastern World for thousands of years.

Tan still remembers the words of the retired director from their first meeting when she asked him to translate and unearth “the ancient sounds of Dunhuang.”

However, it was a mission far more complex and difficult than he originally anticipated. Tan wrote in the concert’s introduction that the murals depict more than 4,000 musical instruments, 3,000 musicians and 500 ancient orchestras. Thousands of stories were told on the walls and Tan was bottlenecked.

“How can I include the vast Chinese culture in two hours?” he asked a Buddhist friend, who suggested artists should create art from the perspective of all living creatures or ordinary people.

“Then I realized for this piece, I needed to use melodies and rhythms ordinary people like as well as musical culture familiar to them, so they can identify with the piece,” he said. “Hence, ‘Buddha Passion’ includes a lot of traditional folk elements and takes audiences through different stories over thousands of years by way of changes in rhythms and pitches.”

Tan picked six stories from the murals. Each is composed into a separate chapter of the piece.

Chapter One “The Bodhi Tree” depicts a young prince trying to save a starving bird using his own flesh and blood, eventually having an epiphany that all living creatures are equal.

“The Deer of Nine Colors” tells the story of betrayal and punishment. It follows a mythical deer of nine colors that saves a drowning merchant and asks him to keep its existence secret. Threatened by the greedy king who wants the deer, the merchant betrays the deer’s whereabouts and is punished for his deceit.

Tan often finds similarities between Eastern and Western tales, and compares “The Deer” to “The Last Dinner.”

“Both of them are about betraying yourself, your friend, your teacher and your belief,” he said.

In “A Thousand Eyes and A Thousand Arms,” a king’s daughter is playing the pipa behind her back among other musicians and dancers. During the performance, someone in the palace suddenly falls ill and needs two arms and two eyes to be cured. The young princess offers hers, and because of her altruistic act, a thousand eyes and arms appear on her.

In “Zen Garden,” a man tries to infuriate a group of monks with his words, revealing the true meaning of emptiness.

“Heart Sutra,” or “The Heart of the Perfection of Wisdom,” is about love and mercy. It recounts the emotional struggles of a monk who encounters a woman freezing to death on his way to Dunhuang. To keep her warm, he defies convention and holds the woman in his arms.

The last chapter, “Nirvana,” explores heaven, earth and mankind through dialogue between a master and his disciples.