One of the most classic roles in Peking Opera is the daoma dan, or young female warrior, usually portrayed wielding a spear on horseback. But even off a horse, the role can be equally fierce.

In 1644, the Ming Dynasty (1368-1644) collapsed and then Emperor Chongzhen hanged himself at Meishan Hill in Beijing. The victorious rebel leader Li Zicheng proclaimed himself the new emperor. His dynasty lasted 42 days.

Fei Zhen’e, the palace maid of a court princess, disguised herself as the princess and let herself be captured by Li, with the intention of assassinating him.

Unfortunately, she failed. The new emperor gave her to General Li Gu, nicknamed the “tiger,” as a concubine. Fei then decided to take advantage of the wedding night to assassinate her new husband. After she completed the mission, as revenge for the death of her master and the fall of the Ming court, she killed herself.

When the palace maid first enters the opera stage, she walks out slowly in an embroidered robe with a jade belt. With an expression of steely determination tinged with sadness, she sings: “I’m filled with hatred toward those who destroyed my country.”

On her wedding night, she applies powder, puts on lipstick, draws her eyebrows and presents herself as a beautiful bride, silently awaiting the arrival of the “tiger” in the bedchamber.

When the bridegroom finally enters, she overcomes the impulse to kill him immediately. Instead, she feigns a smile and prepares for her attack with meticulous precision.

Fei is no stranger to deceit. After all, she disguised herself once as the princess to try to kill the rebel leader. Now, playing the role of a joyful, obedient bride, she artfully conceals her hatred and grief.

In order to express this complicated psychology, Fei’s performance is known as the “double face.” With just a turn of her head, she can switch from exuding hatred to evincing meekness.

The “tiger,” bewitched by her beauty, lets down his guard.

Fei implements her elaborate assassination plan step by step. She first gets the “tiger” drunk, then has him dismiss his servants. She coaxes him to remove his general’s armor. She removes her gown, belt and hairpins, and picks up the knife hidden in her clothing. Then, without a moment’s hesitation, she stabs Li in the heart.

Painter Zhu Gang depicts this assassination moment by contrasting the two protagonists. The “tiger” in his last gasp struggles to grab Fei; she lowers her back to dodge the attack. Her long hair softly hangs to the ground, while the “tiger’s” harsh, black beard expresses his cruelty and ferocity. 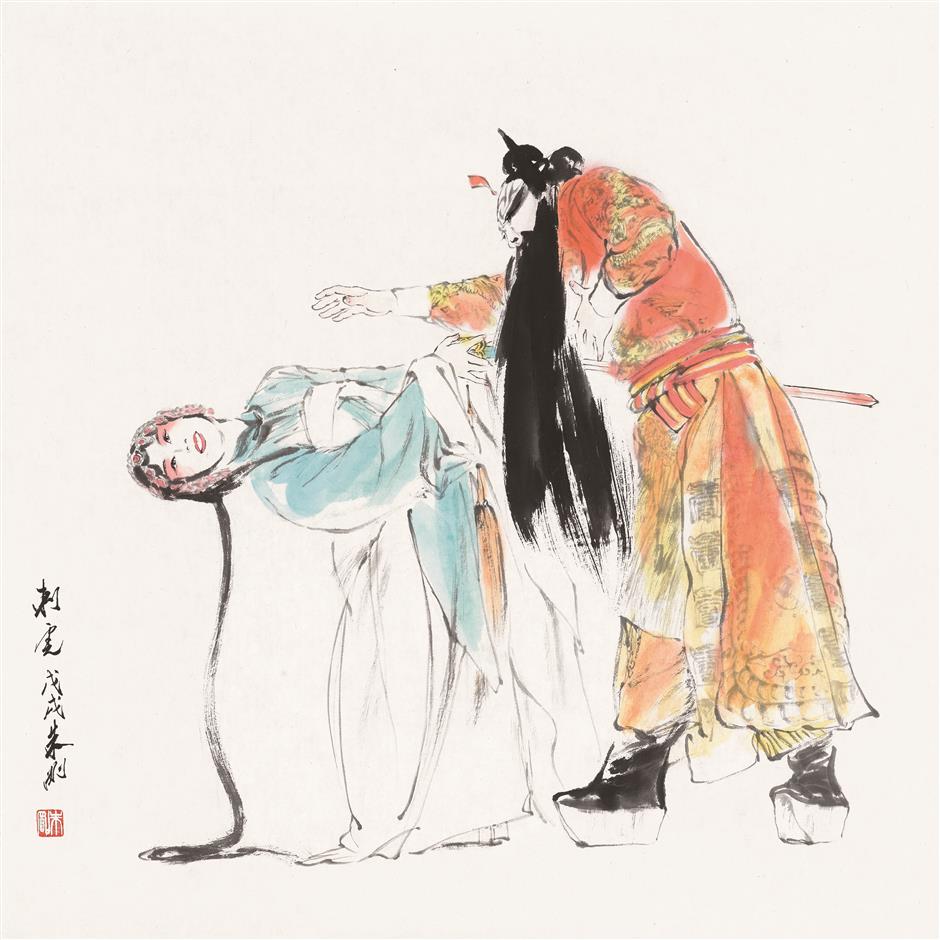 “Assassinate the ‘Tiger’” by Zhu Gang