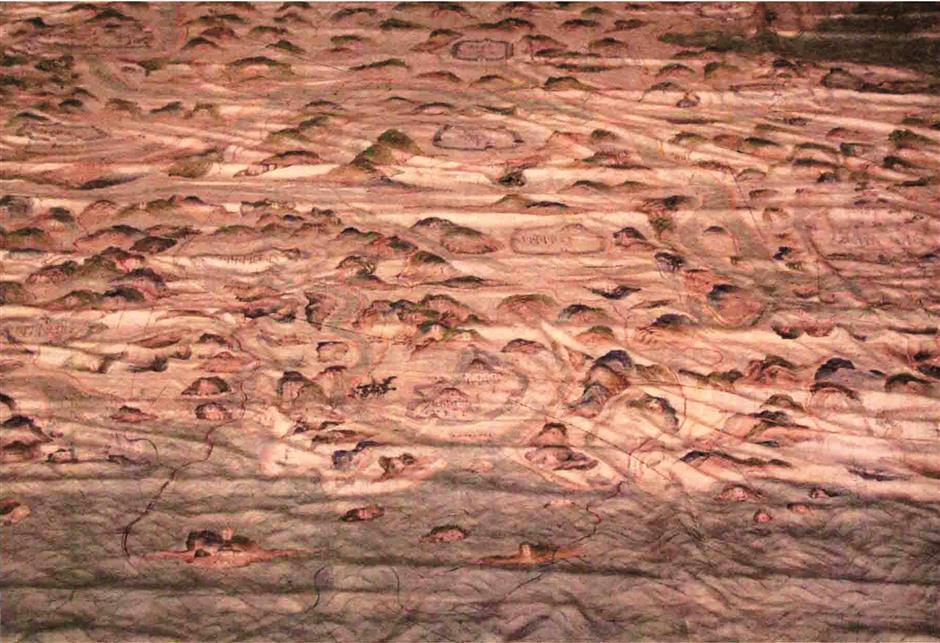 Measuring 6.4 meters in length and 6.4 meters in width, the Fujian silk map stored at the National Library of China is the largest ancient map that has been found in China.

A silk map of Fujian Province in the Qing Dynasty (1644-1911) is one of the wonders of the National Library of China in Beijing. Measuring 6.4 meters in length and 6.4 meters in width, it is the largest ancient map that has been found in China. The map was made during the reign of Emperor Kangxi (1654-1722). In 1682, the emperor secretly called in Shi Lang, who was an admiral in the Ming (1368-1644) and the Qing dynasties, and asked him to lead for an amphibious operation against Taiwan.

At that time, Taiwan was under the governance of Zheng Keshuang, also known as Prince of Yanping. He was the second son of Zheng Jing and grandson of Zheng Chenggong (1624-62), who led forces to expel Dutch colonialists from Taiwan and ended its 38-year ruling in 1661.

The Zheng family intended to transform Taiwan into a military base for those who wanted to restore the Ming Dynasty.

Shi used to be one of Zheng Chenggong’s right-hand men and clashed with Zeng De, also an indispensable assistant of Zheng. Shi killed Zeng, which infuriated Zheng. To gain revenge for this act Zheng killed Shi’s father and brother. Shi then defected from Zheng’s troops to the Qing Dynasty.

Serving as the commander-in-chief of the Qing fleets, Shi destroyed the power of Zheng Keshuang in 1683. Becoming an integral part of the empire, Taiwan prefecture was established in 1684 along with three political divisions: Taiwan County, Zhuluo County and Fengshan County. The prefecture was under the administration of Fujian Province.

To show the prosperity and unity of the nation, Fujian officials planned to send Emperor Kangxi a map. The map features the locations of nine prefectures, one district, 60 counties, towns, villages and ports in Fujian Province. The varied landscape, such as mountains, islands and rivers, is vividly depicted on the map. The boundary lines between prefectures are marked in red whilst the green lines mark the boundary between counties. Yellow lines indicate roads.

Instead of using rice paper, the artists painted on silk, which was produced in Huzhou in Zhejiang Province. Huzhou silk is famous for its pure, fine, white and pliable features.

The large map is made up of two layers of white silk and each layer consists of 12 bolts of silk.

Taking inspiration from traditional Chinese landscape paintings, artists used mineral pigments to color the mountains and rivers in blue and green. The blue-green shanshui, or mountain and river, technique was adopted by many famous Chinese painters, such as Li Zhaodao in the Tang Dynasty (AD 618-907), Wang Ximeng in the Song Dynasty (960-1279), Zhao Mengfu in the Yuan Dynasty (1271-1368) and Wen Zhengming in the Ming Dynasty.

The map is surrounded with a yellow and silk ornamental band. The 55-centimemter width band is embroidered with nine golden dragons, symbolizing the imperial power. Nine is an auspicious number in China. The highest single-digit number in base ten stands for completeness and eternity in Chinese culture.

The large map is stored in a wooden box, of which the lid is engraved with three dragons. It is so heavy that it requires four adults to carry it.

During the Qing Dynasty, the map, along with the box, was well-preserved at the imperial cabinet respiratory in the Forbidden City before it was moved to Jingshi Library, the predecessor of the National Library of China.

Following the September 18 Incident in 1931, staff were forced to move the library’s precious collections.

The map should have been transported to Shanghai or Nanjing but the library staff were surprised to find it in Beijing in 1946. The reason why it was kept in Beijing is still unknown. Some experts suppose that the map received special treatment due to its historical significance. On the other hand, other experts believe there is a simpler explanation — the map and its container were too heavy to transport.

Due to its large size, the map has been unfolded only six times over the last 50 years. In the first couple of times experts took photos and shot a video for research purposes. In 1998, the Chinese president came to see the treasure. The fourth unfolding of the map was for a documentary film in 2001.

The public was first exposed to the map in a monthlong exhibition in 2006. The last time it was unfolded was six years ago when library staff scanned the map to make a copy.