Intricate carving art has a future, knock on wood

Yu Lixin, 55, is a fourth-generation woodcarver in his family. He took up the craft as a teenager and has become an acknowledged master of the skill.

Born in Nantong in Jiangsu Province, Yu and his family moved to Shanghai in the 1980s. Today he works out of an ancient building in Zhouqiao Old Street in Jiading District.

The street is an ancient architectural complex, housing Fahua Tower from the Song Dynasty (AD 960-1279), an 800-year-old stone bridge and several old buildings “transplanted” from Anhui Province, including Yu’s studio. 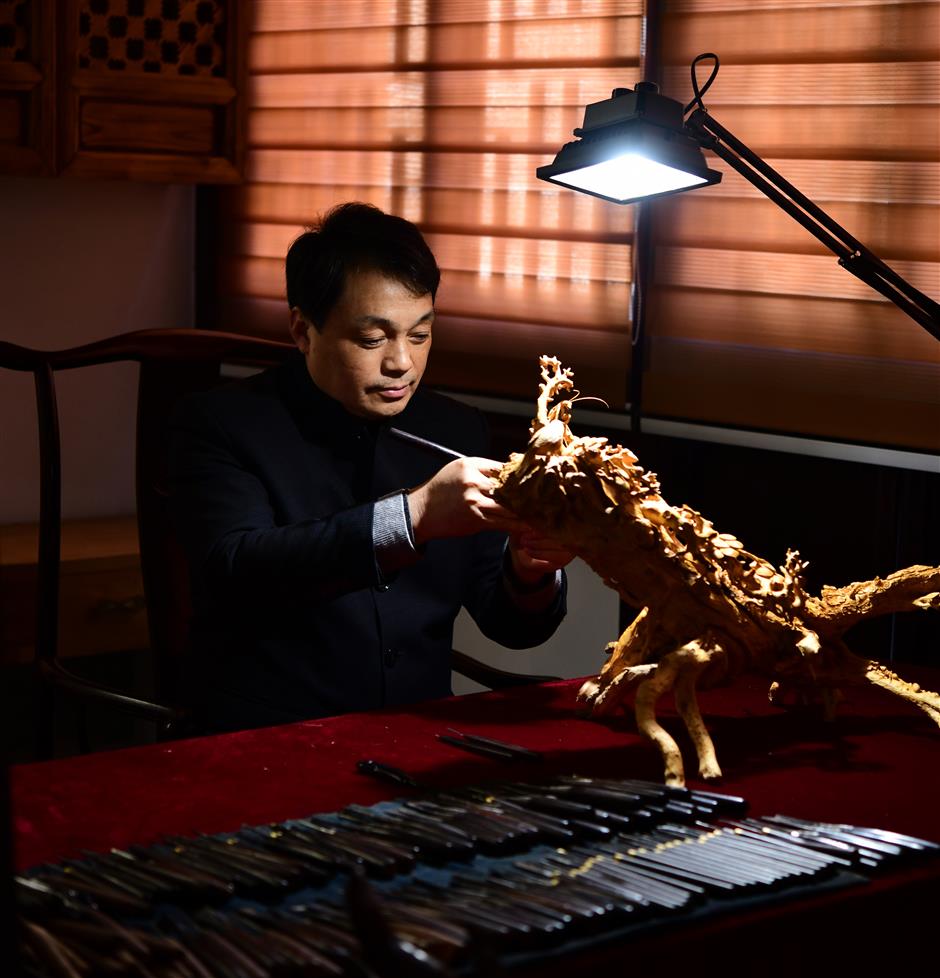 As I step into the two-story building, Yu is busy carving at his worktable to the sound of gentle background music. The table is heaped with carving tools, numbering what Yu estimates to be more than 100.

The studio is steeped in the deep fragrance of eaglewood, a dark resinous wood used in incense, perfume and small carvings. Around the room are Yu’s many works — ancient-style furniture, a 2-meter-long artwork featuring birds of various kinds, a series of table decorations designed as a tower, a teapot and a censer.

“Many of my childhood toys were made of wood by my father, including a wooden gun and table tennis paddles,” Yu tells me. “I often watched my grandfather and father doing wood carvings, so I came naturally to know how to do it.”

In his boyhood, he helped family members carve stamps, seals used to decorate steamed buns with patterns and nianhua, or New Year’s pictures.

“When they praised my work, I felt a great sense of accomplishment,” says Yu. “Every night, after finishing my homework, I devoted myself to making wooden artifacts.”

Unlike Yu’s modern business model, Yu’s grandfather, a locally famous woodcarver, offered in-home service. According to Yu, his grandfather and apprentices stayed in a customer’s home while they worked, making mostly furniture like beds, tables and chairs.

Since the work could often take a long time, the stay could be up to a year, Yu recalls.

“The customers were wealthy,” says Yu. “My grandfather spent the first week polishing the tools before even starting work. He smoked, drank tea and chatted with customers to see whether the families were in tune with his design ideas and could afford the cost.”

That concept of making friends with customers first and then doing business was ingrained in the family tradition and survives today with Yu.

The timber that Yu chooses for carving is valuable and precious, varying from zitan, or red sandalwood, to huanghuali, or fragrant rosewood and agalwood,

On commission, Yu says he once spent four years carving a facsimile of the famous scroll painting “Along the River during the Qingming Festival,” a work of Zhang Zeduan during the Northern Song Dynasty (AD 960-1127). It’s the longest wooden artwork of its kind in China, at 6.5 meters. 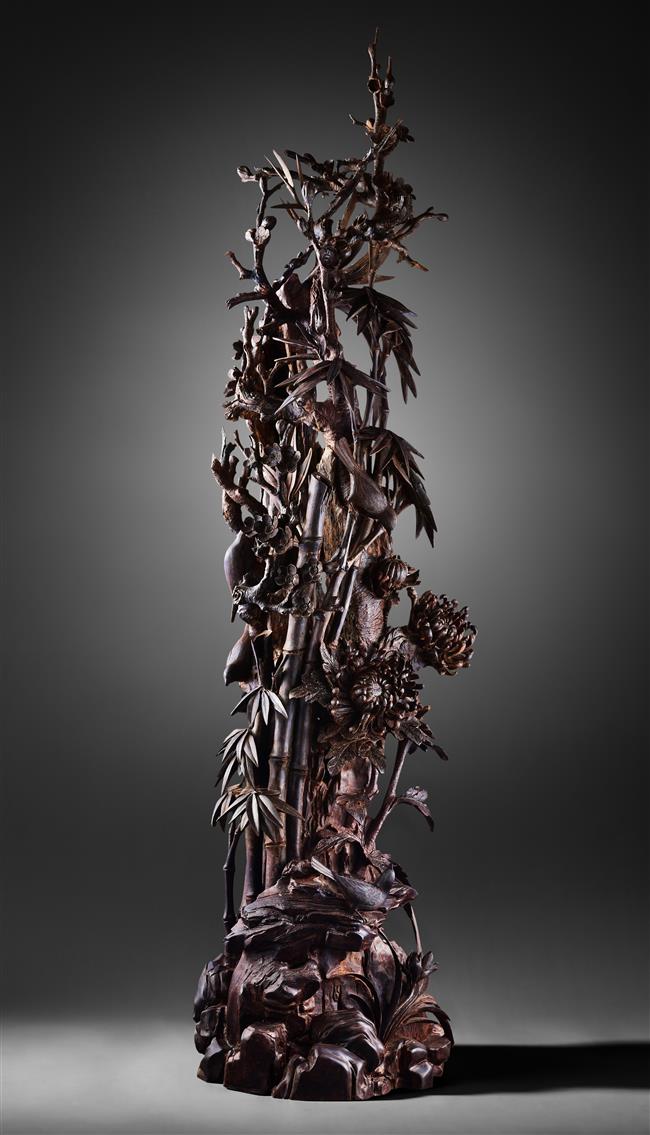 “Woodcarving requires patience and perseverance,” says Yu. “I arrive at my workshop around nine or 10 in the morning, skip lunch and keep carving until four or five in the afternoon. I set daily goals for myself, and if I don’t reach them, I don’t leave my worktable.”

Apart from a pair of skilled hands, Yu also has a pair of keen eyes.

In one work, he captures the vivid scene of hairy crabs rushing to escape from a bamboo basket, a behavior he observed in a crab-raising pond in his hometown. To get the right effect, he put a real crab on the table while carving. The lively artwork also features ears of rice, which the crabs climb.

“When the paddy is ready for harvest, hairy crabs come to maturity,” says Yu. “The artwork took me four months.” 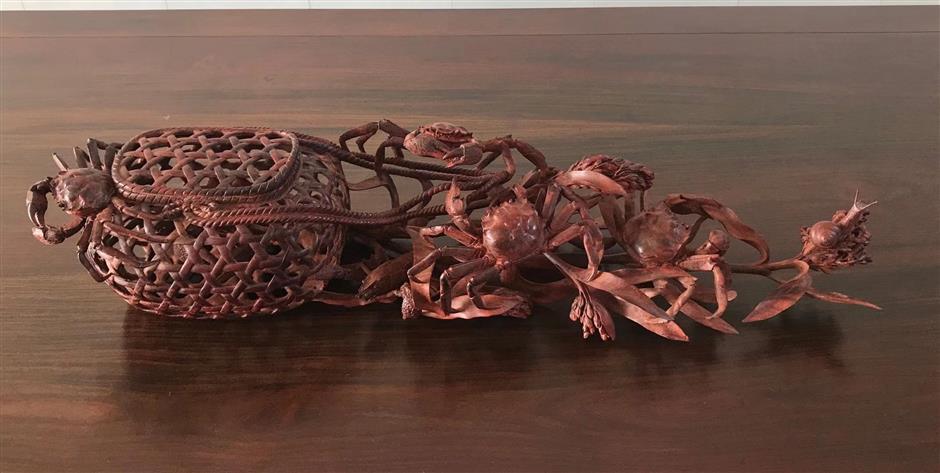 In carvings of animals, plants and landscapes, Yu often endows his work with the concept of idyllic life. The guoguo, or grasshopper, is a frequent pattern on his works. He caught one of the insects and kept it in a jar in order to observe it closely.

Yu was designated as an “inheritor” of the tradition of sandalwood carving in 2016. He is keen to nurture new talent, teaching classes at the Shanghai Art and Design Academy every week.

However, he says, few young people are really interested in making woodcarving their life’s work, mostly out of concerns that they can’t make a good living from it.

“Apprentices and students are different,” says Yu. “My great-grandfather and grandfather had dozens of apprentices who lived with our family while they learned the skills. In the first three years, the apprentices didn’t get paid and had to provide their own food. In the next three years, they became assistants and worked with masters. That training model no longer exists.”