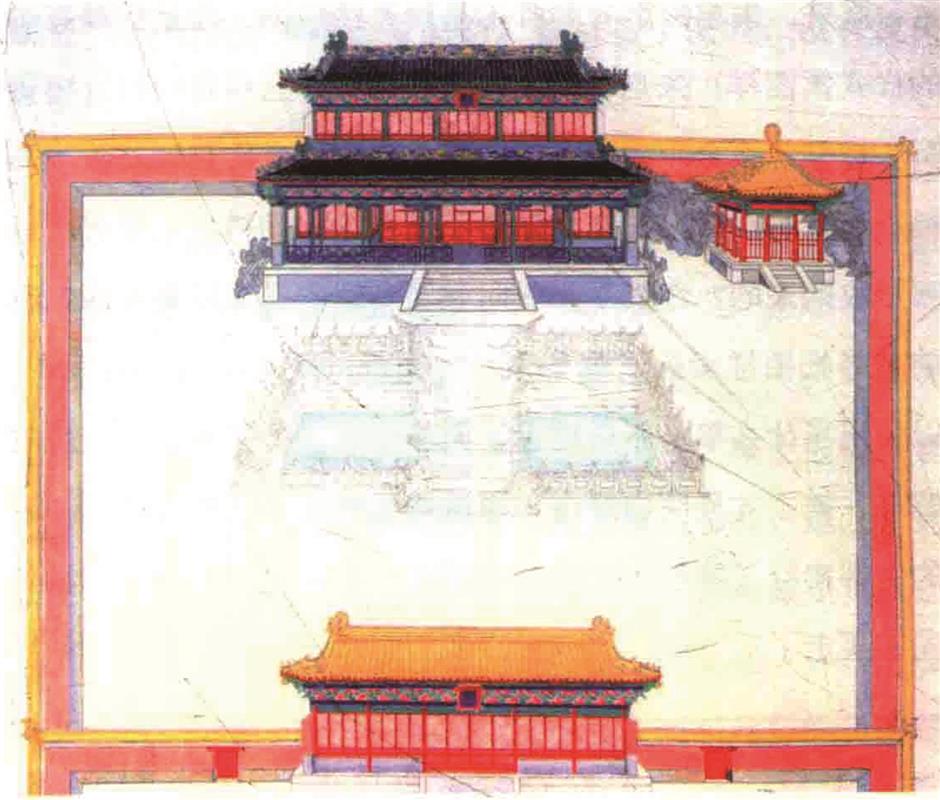 Yangshi Lei’s drawing of the Wenyuan Chamber in the Forbidden City in Beijing. In 2007, UNESCO added the Yangshi Lei Archives to its International Memory of the World Register.

The Forbidden City in the center of Beijing is the largest collection of ancient buildings in China, while the Summer Palace on the western outskirt of Beijing is a masterpiece of Chinese landscape garden design.

The Temple of Heaven in the southeastern part of central Beijing is the most representative work among China’s ancient religious buildings.

All three complexes are recognized as UNESCO World Heritage Sites.

Many people are curious about the craftsmen who skillfully toiled to create these iconic symbols of Chinese architecture.

A legendary family surnamed Lei presided over the design and construction of the imperial buildings for more than 200 years.

Spanning eight generations, since the end of the 17th century, the Lei family also engaged in designing the Mountain Resort in Chengde, the Eastern Qing Tombs and the Western Qing Tombs in Hebei Province.

A fifth of the buildings that are listed as UNESCO World Heritage Sites in China were created by the Lei family.

On August 12, 2004, an exhibition titled “Yangshi Lei” was inaugurated at the National Library of China in Beijing. In the Qing Dynasty (1644-1911), yangshi meant architectural drawing. Due to their great contribution to imperial buildings, the family was famed as “Yangshi Lei.”

Apart from sketches, the exhibition also displayed their construction models and relevant archives.

Lei Fada, a native of Jiangxi Province, was the first generation of “Yangshi Lei.” In 1683, he and his son went from Nanjing to Beijing and were recruited by the government to help build imperial gardens.

During the reign of Emperor Kangxi (1654-1722), Lei participated in the renovation of three main Forbidden City halls: the Hall of Preserving Harmony, the Hall of Central Harmony and the Hall of Supreme Harmony, which were originally built in the Ming Dynasty (1368-1644).

One day, the last wooden beam on the Hall of Supreme Harmony needed to be secured through mortise and tenon joints, which was part of a ceremony celebrating the topping out.

The hall is at the heart of the immense palace complex so Emperor Kangxi attended the ceremony.

However, there was something wrong with one mortise and tenon joint and two pieces of wood couldn’t be connected. But at a critical moment, Lei solved the problem.

Around 15,000 pieces of Lei’s archives, from over 20,000, are in the National Library. The rest reside in the Palace Museum in Beijing and Tsinghua University. Showing the Qing architectural process, from design to construction, the precious archives are the only primary source for imperial buildings.

Apart from sketches and work diaries, the Lei family also left dozens of architectural models, which were called tangyang in ancient Chinese architecture.

Tang means iron in Chinese. As its name signifies, the making of models includes the process of ironing.

Mainly made of wood, sorghum stalks, straw boards and wax, Lei’s tangyang is so exquisite that it can be disassembled and reassembled.

Every tangyang is attached with a label, which shows the name of the architecture, the dimensions of components and the construction techniques.

We should be thankful to the descendants of the Lei family and some scholars who contributed to the preservation of this national treasure.

In 1860, when Anglo-French allied forces began to advance on Beijing, Lei Jingxiu, who was the fifth generation of “Yangshi Lei,” sneaked into the storehouse of the Forbidden City and transferred all the designs and models to his home .

After the collapse of the Qing Dynasty in 1911 the Lei family declined.

Struggling to support themselves, Lei’s descendants had to sell their architectural legacies left by their predecessors.

One day, Zhu Qiqian, president of the Society for Research in Chinese Architecture, surprisingly found Lei’s archives at a bookstall. Founded in 1929, the society aimed to apply modern technology to protect Chinese architecture.

Buying all the remaining archives, Zhu asked the stallholder about the source and the whereabouts of the works.

The stallholder said he bought them from other people and sold some of Lei’s archives to some foreigners.

Zhu hurriedly gathered members of the society, who were masters of Chinese architecture, to discuss a way to protect the precious legacies.

Some members got in touch with patriots and asked them to finance the purchase of Lei’s missing archives, while others persuaded foreign buyers to transfer the cultural relics to the Chinese archives.

In 1930, the descendants of the Lei family sold all of their remaining archives to the National Library of China. In 1964, they donated the rest to Beijing Municipal Administration of Cultural Heritage.

In 2007, UNESCO added the Yangshi Lei Archives to its International Memory of the World Register and noted that it “is not only a treasure trove of Qing-era architectural knowledge, but Qing-era cultural knowledge as well.”

Today, these drawings and models still play an important role in the maintenance and protection of ancient imperial buildings.