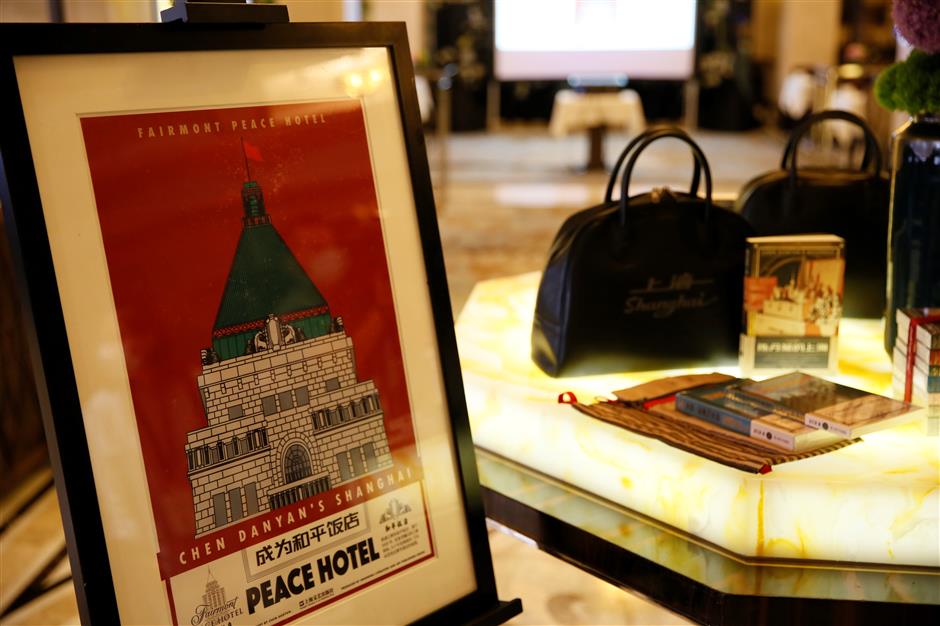 In the gift shop of Fairmont Peace Hotel, there is a book exhibition of Chen Danyan, celebrating her decade of research and writing of the city.

The Fairmont Peace Hotel has long been recognized as an Art Deco masterpiece. It was the brainchild of Sir Victor Sassoon, an Anglo-Jewish real estate tycoon, visionary and playboy. But behind the facade, the hotel played host to some of the finest, lavish, “decadent” parties Shanghai had ever witnessed in the early 20th century as it wined and dined dozens of famous celebrities from the world of cinema, art and literature.

Actor and playwright Noel Coward penned “Private Lives” at the opulent hotel in 1929, while silent movie stars Douglas Fairbanks and Mary Pickford were honored with a reception. But perhaps the hotel’s most famous guest of all was the comic genius, Charles Chaplin, who arrived in the metropolis in 1936 to great fanfare with his actress fiancee Paulette Goddard. And writer Chen Danyan has captured every fascinating detail of the hotel’s controversial past — warts and all.

The Shanghai author met a dozen curious readers and media reporters at the Peace Hotel last week to experience an architecture-reading tour as part of the city’s ongoing book fair.

The 61-year-old led the eager bunch around the iconic Art Deco luxury hotel on the Bund, which Sassoon opened in 1929, to celebrate the second edition of her book, “Being the Peace Hotel,” first published in 2012, and “Chen Danyan’s Shanghai.”

“It is not like you go around a building and you can read about it as if opening a book,” the author said. “You need to know what to see and how to appreciate. 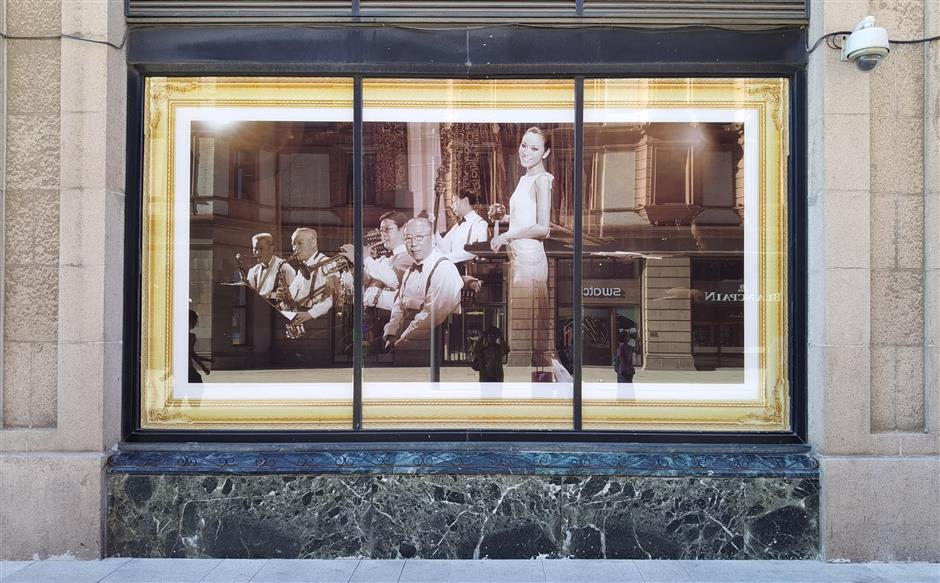 In the early 1980s, Shanghai’s first jazz band, consisting of five retired musicians, was born at the Jazz Bar in Peace Hotel, which was called the Horse and Hound in Victor Sassoon’s time.

“Let’s open the book and turn to page 138. This is the Jazz Bar, which used to be called the Horse and Hound during Sassoon’s time. There are about 150 pairs of greyhound emblems in the building if you have the time to count them.”

In the early 1980s, Shanghai’s first jazz band was born here. The band of five retired musicians, averaging an age of 60, played every night from the day it was established until April 6, 2007, when the Peace Hotel suspended business for renovation.

“These people learned jazz by listening to the radio at that time. The second chapter of my story took place in this bar,” said Chen, who interviewed resident bandleader and chief trumpet player, Zhou Wanrong, in 2005 when he was 85.

The visitors followed Chen through the fish bone-shaped lobby, to the octagonal atrium, the design of which she said came from the Shenyang Imperial Palace, a former imperial palace built in 1625 for the Qing Dynasty (1644-1911) emperors.

“With the dome hovering upward, it strengthens the sense of order and harmony Sassoon meant to build with a traditional and auspicious Chinese shape,” Chen said. “A message, that Nazi Germany was about to invade the Soviet Union during World War II, was handed over in this lobby by agents who lived in the hotel.” 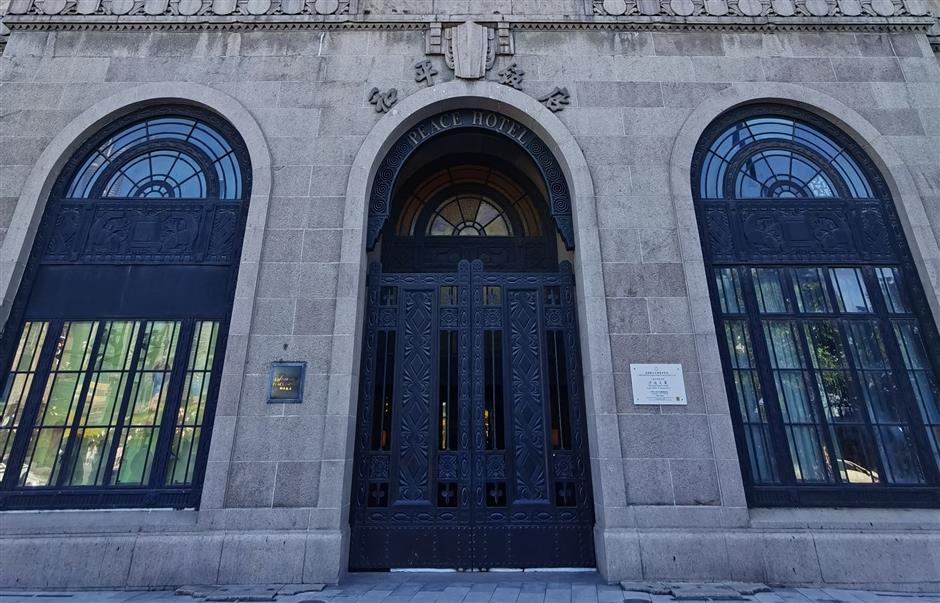 The door facing the Bund, at 20 Zhongshan Road E1, is mostly closed all year round. It is an entrance for very important guests.

The author eloquently elucidated dozens of intriguing stories and captivated her audience hungry for more interesting details, telling tales from three crucial periods of the building’s 90-year history: from the Sassoon House and the Cathay Hotel (1929-1952) to the Peace Hotel-North Wing (1956-2007), and to today’s Fairmont Peace Hotel, which opened to the public in 2010 after a three-year renovation.

The Sassoons were leaders of a Jewish community in Baghdad and for centuries the head of the family acted as the pashas’ chief treasurer. Yet one dark night in 1829 David Sassoon had to flee from persecution and moved his family to Bombay, modern day Mumbai, in India. In 1833, he established the house of David Sassoon & Co, with branches in Calcutta, Shanghai, Canton and Hong Kong. He and his eight sons profited handsomely from several businesses, which included a monopoly of the highly profitable opium trade.

When Victor took over the business in Shanghai in 1917, he quit the opium trade and turned to real estate. A crippled playboy of charm and wit, he developed more than 1,900 buildings in Shanghai, and immediately became the real-estate tycoon on the Bund when the Cathay Hotel was completed in 1929.

Standing at 77 meters high, the “tallest building of the Far East” at the time was complete with air-conditioning, marble bathtubs and flushed toilets. It featured state-of-the-art products from all around the world: the green glazed tiles from England, the Lalique crystal doors from France, the Steinway pianos from the United States and the stained-glass windows by Pilkington of Japan.

Shanghai was a city of glamor back then and Victor Sassoon was the sixth richest man in the world. In 1935, Sassoon threw a lavish fancy-dress ball and invited all the stylish movers and shakers in the metropolis to gather at the Cathay Hall with a “Circus” theme. They partied, dressed as animals, like there was no tomorrow. 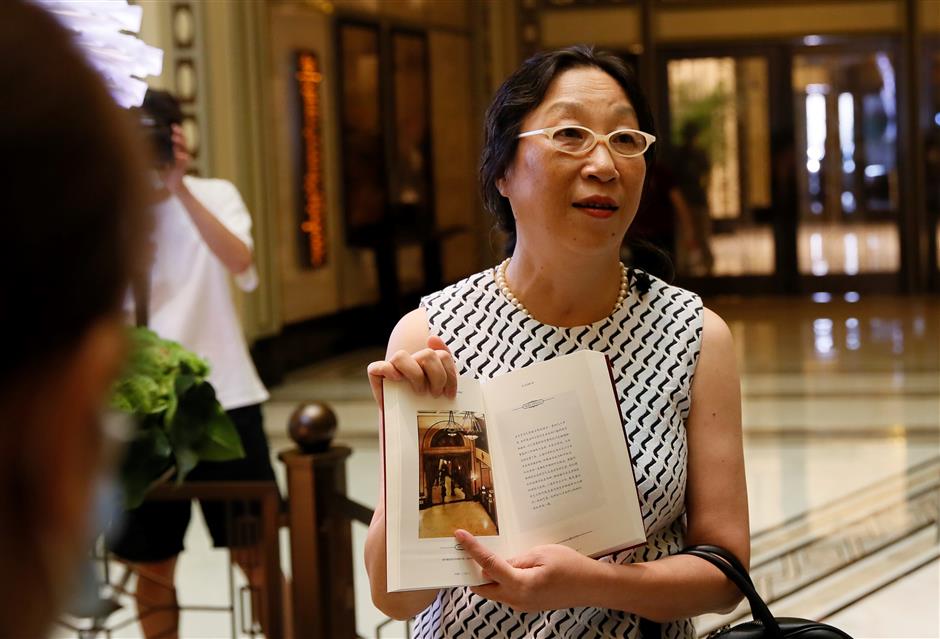 Chen Danyan shows a picture she took of the hotel lobby in 2003. A message, that Nazi Germany was about to invade the Soviet Union during World War II, was handed over in this lobby by agents who lived in the hotel. 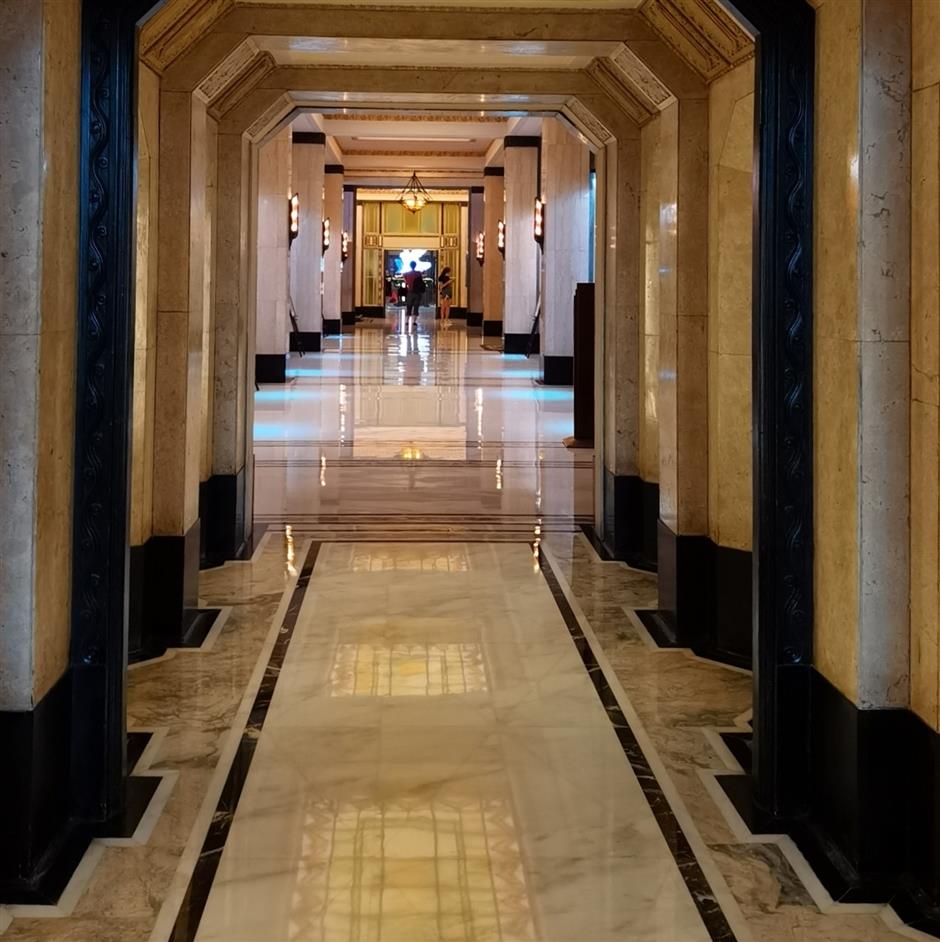 The fish bone-shaped lobby is well restored to its Art Deco style after a 2007 face-lift.

Yet in contrast, in the Sassoon Suite on the tenth floor of the hotel, which used to be Victor’s private bedroom and study, Chen described him as being a prudent and careful man with a private bathroom to himself cladded in Indian dark marble and having a taste for Chinese antiques.

The Cathay’s glory days ended when a full-scale war broke out between the China and Japan in 1937. Although the hotel was in the International Settlement, “officially neutral ground,” it was damaged by a Chinese aircraft, which accidentally dropped two bombs between Cathay and Palace, a hotel just across the street, while trying to target a Japanese cruiser, Izumo, at the Bund on August 14, 1937.

Over 400 people, both Chinese and foreign, where killed and wounded by the blast, on the so-called bloody Saturday, ending the good old days in Shanghai.

Japanese troops that occupied all of Shanghai on December 8, 1941, made the Cathay one of their headquarters. When the People’s Liberation Army took over Shanghai in 1949, many people viewed the hotel as an example of Western decadence.

In 1952, Sassoon handed the building over to the Shanghai government to offset taxes accrued over the years, and it became the accounting office of the East China Bureau. In 1956, a USSR Navy force visited Shanghai. To solve the shortage of foreign-oriented hotels, the Cathay Hotel was approved to resume business and renamed “Peace.”

“The Peace is more than just a hotel. It is a city landmark and a living museum that has witnessed the progress of a city in the rejuvenation of an old hotel,” said George Wee, who took charge of Fairmont Peace Hotel in 2013. “Nowadays, luxury is all about lifestyle and enjoy great moments.” 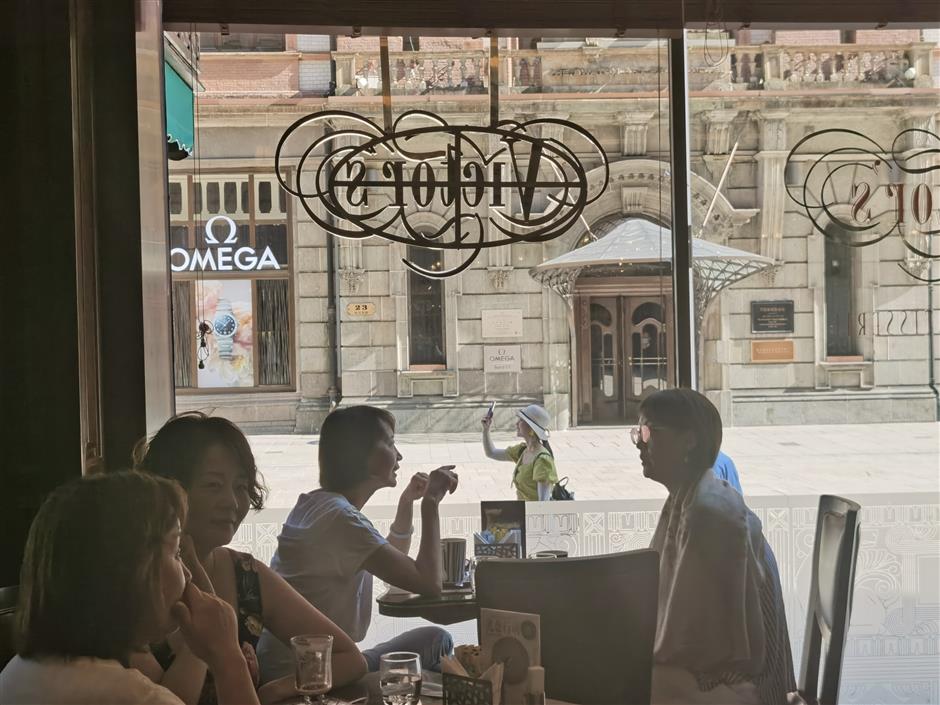 People enjoy a moment of leisure at the Victor’s cafe, which was called the Cathay’s cafe in Victor Sassoon’s time. During the bloody Saturday bombing on August 14, 1937, shrapnel glanced off the Cathay’s windows. 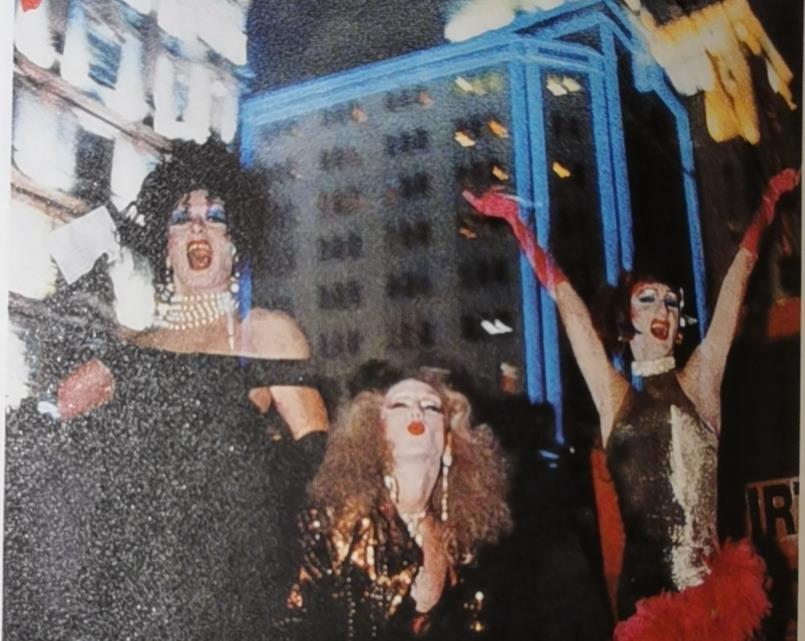 The cover of the Sunday Morning Magazine on March 24, 1991, which shows the revellers posing for a picture in front of the Peace Hotel.

In Chen’s book, there is a whole chapter dedicated to the 1991 China Coast Ball, formerly the Bela Vista Ball. Based on her detailed interviews with an interpreter and a marketing manager, both going through the process of preparation, Chen recreated an unforgettable night of dancing and debauchery at the Peace Hotel — nearly 30 years after closing its doors to the outside world.

Five hundred people from Hong Kong and around the world signed up and flew to Shanghai. All rooms were booked. To create an ambience of the old Shanghai as was required by the guests, old furniture in the suites were sourced and traced back from suburban hostels. Even the hotel’s retired master chef was invited back to head the kitchen for a special Western menu.

Moreover, the manager, a Vietnam War veteran, made an effort to learn the foxtrot to lead the first dance of the night with Harriet Sargent, who in that year published her book “Shanghai,” which brings to life the city’s heyday (1920s-30s) in a captivating account of its rise and fall.

From the Cathay to the Peace, I see a new generation of Shanghainese growing up with the identity of this hotel. No monument can be compared to the fascinating stories and personalities behind it. That’s the reason of being the Peace Hotel

A survivors’ photograph was taken at 7am, which was the official closing time of the ball, but the Peace Hall did not empty for another two hours, Chen writes. It was such a memorable evening that the organizers hoped they could repeat the following year.

And they did. At the Peace Museum, in the south of the hotel lobby, an old album kept all the pictures and newspaper clips from the 1992 China Coast Ball, with a note from Ted Marr, the leader of the party pack, saying “Have the time for your life.”

“From the Cathay to the Peace, I see a new generation of Shanghainese growing up with the identity of this hotel. No monument can be compared to the fascinating stories and personalities behind it. That’s the reason of being the Peace Hotel,” said Chen.

“With its open-mindedness and well-informedness, the grand hotel has mirrored those of the city, weathering war, revolution and radical social upheaval, and eventually has made peace with its original sin, thanks to people who know the goodness of a heritage hotel and cherish it as if their own.”