Xiao He, the musician who launched the unique Nursery Rhyme Program in 2018, is in Shanghai with the sole purpose of uncovering old gems from the city.

The 45-year-old from Hebei Province was born He Guofeng, but he assumed the moniker Xiao He, which literally translates into “little river.”

After dabbling in different music genres from rock to experimental, his hunger for reaching out to other people and their pasts led to the birth of the Nursery Rhyme Program, a project to find and compile nursery rhyme songs from around the country. 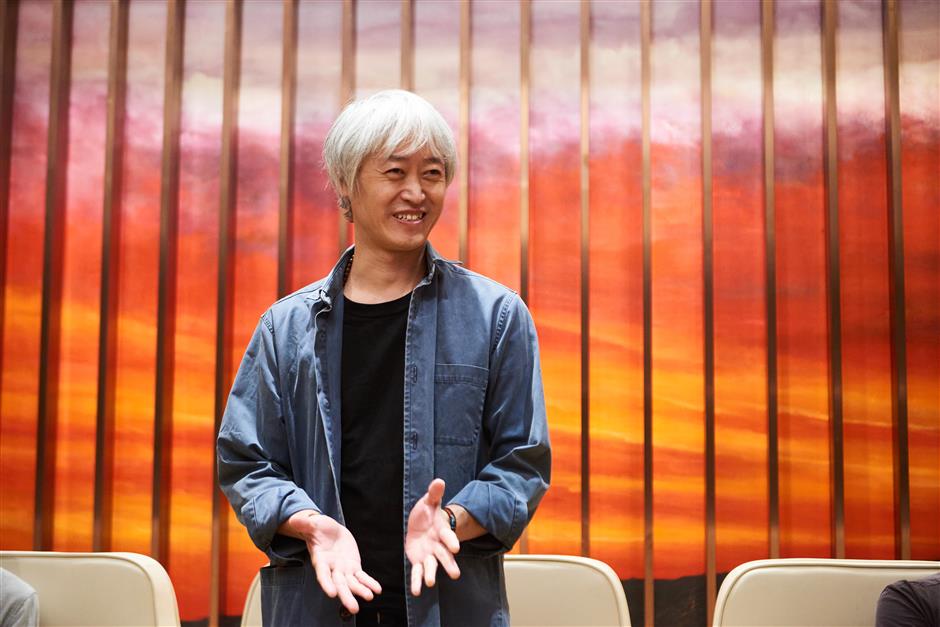 The project started in Beijing two years ago. It visited Changsha, the capital of Hunan Province, and Hangzhou, capital of Zhejiang, before arriving in Shanghai at the beginning of this year.

“In today’s society, nursery rhymes and their inherent poetic beauty are fading away,” Xiao He told Shanghai Daily. “We hope to find and hear the songs again because they build natural bridges between the young and old, and they convey the melodious beauty of the Chinese language, music and culture.”

With dreams of becoming a musician, Xiao He left his provincial hometown for Beijing at age 20. He formed a rock band called “Glamorous Pharmacy” and became lead singer.

He went on to explore varied music genres, including folk, avant-garde and experimental music. He is known for his unique creative style.

Exploring music started as a journey of self-exploration.

“It was about 10 years ago when I was doing self-exploration in improvisational performing,” he said. “I wanted music to flow from inside my body as if it came from nature. I believed in the eternal possibilities of individuals.”

He continued, “However, music inspiration didn’t always just appear by itself, as I had expected. I started to realize that individuals, including me, have their limitations – that there was a dead end ahead if I went along a particular path.”

As a result, he changed his focus exploring music from the private inner world to the outside world. 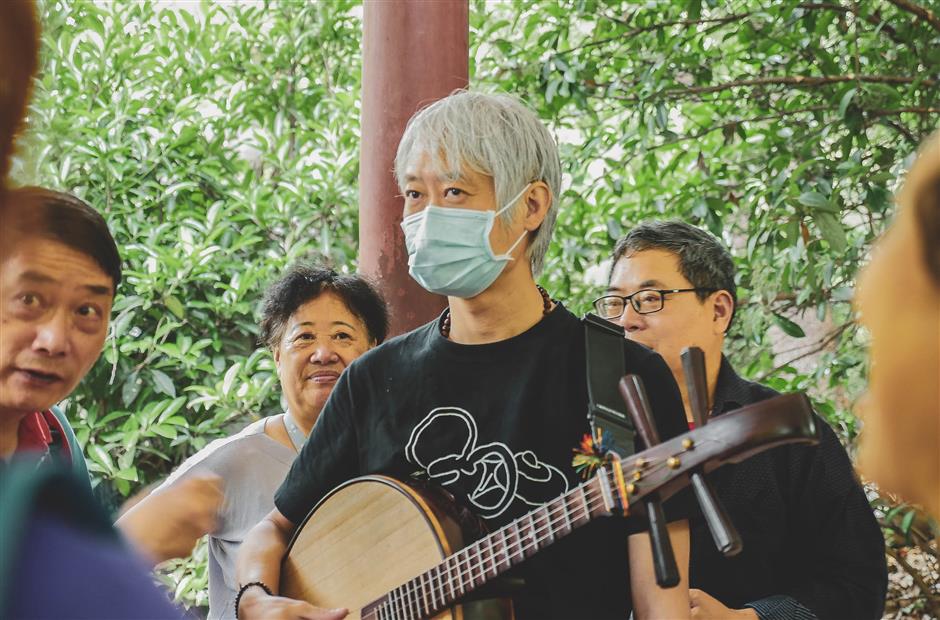 Xiao He plays the traditional zhongruan in Yangpu Park, hoping to attract the attention of senior citizens with old nursery rhymes to share.

“I found beauty in the connection between people and the relationship between humans and nature,” he said. “What I enjoyed most in the Nursery Rhyme Program was not collecting the singing rhymes, but rather the process of digging them out from the memories of the elderly and watching them teach the rhymes to the younger generation.”

Xiao He and his five assistants typically stay in one city for a few months, visiting parks and other places frequented by elderly people who might have nursery rhymes to contribute. Volunteers are recruited in each city.

At the end of each trip, some 10 local nursery rhymes are selected and showcased in small performances. Xiao He invites local musicians to join the performances. The elderly people who contributed the songs are also invited on stage.

Though the outbreak of the novel coronavirus interrupted the project’s progress in Shanghai, a showcase performance was eventually staged at SAIC Shanghai Culture Square last weekend. It was the first time the venue staged a folk rhyme concert.

Apart from Xiao He’s musician friends, three Shanghai residents in their 80s, who contributed rhymes to the project, were also invited to sing during the performance.

Some of the songs were in Shanghai dialect, requiring Xiao He to learn the pronunciation of the lines.

“Rhymes collected from different cities have their own geographic characteristics,” said Xiao He. “The songs from northern China cities are just like the northern China people – forthright and frank. In southern cities, the melodies are more exquisite and circuitous.” 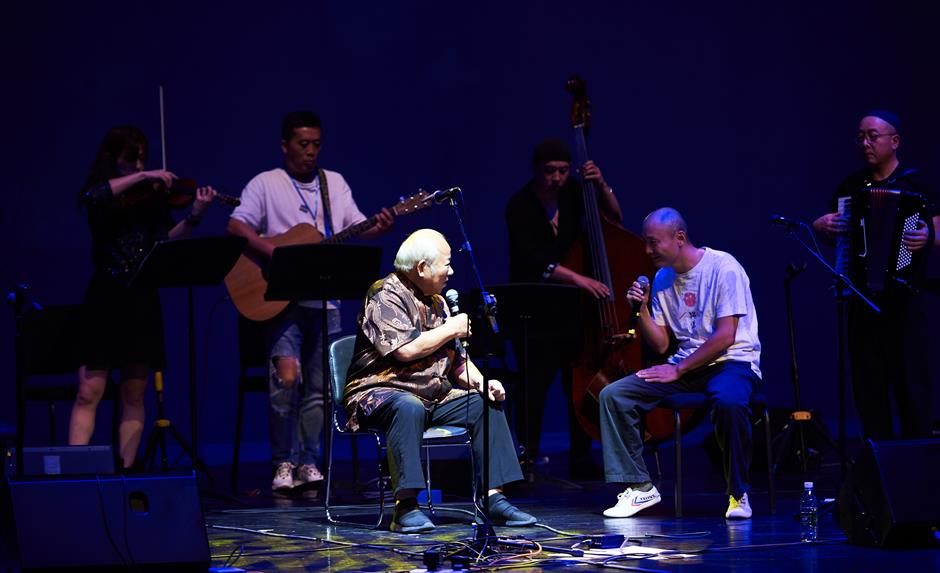 Three Shanghai residents in their 80s, who contributed rhymes to the project, were invited to sing during the song concert of nursery rhymes at SAIC Shanghai Culture Square last weekend. 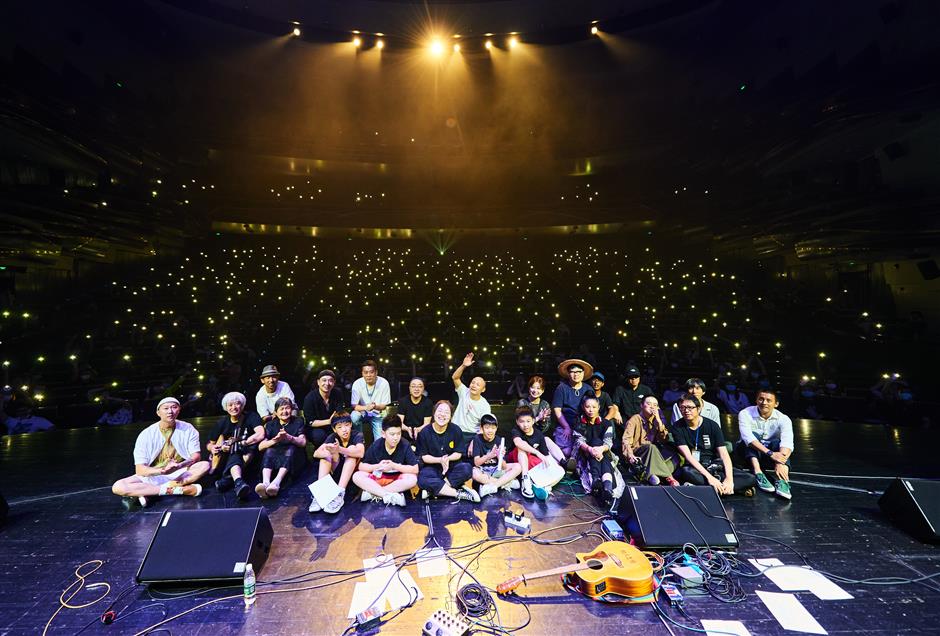 Musicians and performers pose after the concert.

The Nursery Rhyme Program has collected over 300 nursery rhymes in the past two years. Most of them were contributed by people born in the 1930s and 40s.

Some rhymes have lyrics based on ancient Chinese poems, but with melodies borrowed from foreign songs. Some rhymes have come down through generations, describing village landscapes, neighborhood life or even the weather.

“You can find details of daily life, local culture and the historical development of a city in the songs,” said Xiao He. “For example, we found the Shanghai nursery rhyme ‘Fishboat,’ which encourages fishermen to conquer fierce sea conditions and strive for a better life. It was a rhyme from the days when Shanghai was still a fishing village.”

Xiao He’s team has visited 25 parks in 12 districts in Shanghai, as well as some suburban villages and towns. They collected over 100 rhymes, but only about 10 of them were complete enough to be performed.

“The project has not been easy,” Xiao He said. “Some songs are so old that only small segments survive clearly. Over 95 percent of our efforts are in vain. But once we manage to find one song, it is always so heartening to listen to the elderly people share the stories behind a song. They were very far-off but meaningful memories.”

Xiao He said they plan to visit six more cities in the first phase of the project.

“This will be a long-term project,” he said. “We haven’t thought about commercializing the collected nursery rhymes yet. What matters to me now is the process. We are bridging two or even three generations with the help of music.”

He continued, “In our project, the elderly are invited to teach children to sing. The purpose is not music education, but rather to allow the children to feel the power of music and how it connects people. Some nursery rhymes are so poetic and filled with care and love.”

Xiao He’s interest in the connection between people showed up in an earlier project called “Music Portraits.” In that endeavor, he would spend days with a stranger, observing and listening before writing a song about the person.

“At the current stage, my creative strength comes from emotional connection and interaction with others,” he explained.