A community that honors its heritage proudly on display

Shanghai has grandiose public museums dedicated to art, history, science and culture. It has private museums showcasing the hobbies of collectors and handicrafts of artisans. And now it has its first museum created by a local community to honor and preserve its heritage.

The Xiwang Garden Lane Museum in Jing’an District is somewhat hidden among the red brick-and-wood garden houses on tree-lined Fengxian Road. It may be a bit hard to find, but it’s worth the effort.

The Xiwang Community’s 12 terrace garden houses were built in the Queen Anne style. Beyond the artfully carved verandas, wooden staircases, old-fashioned fireplaces and courtyards banked with summer plants, each of the houses has a story to tell, dating back decades.

During the 1860s, the British Sassoon Bank purchased the land and built several temporary houses for its employees. Around 1900, real estate tycoon Cheng Jinxuan bought the land from Sassoon and erected rows of Western-style villas. Because their courtyards were filled with trees and flowers, the housing strip came to be called Garden Lane. It was home to expats, wealthy Chinese families and celebrities.

Today, the residency has changed from high-fliers to ordinary people, with one house sometime serving as home to several families. Because the houses are heritage-listed, any changes to the structures or their interiors require a government permit.

The lane bears witness to 20th-century history. It remained surprisingly intact and undamaged during the Japanese occupation, the Chinese civil war and the “cultural revolution” (1966-76). Its bricks, arches, windows and exteriors are still pretty much the way they were 100 years ago. 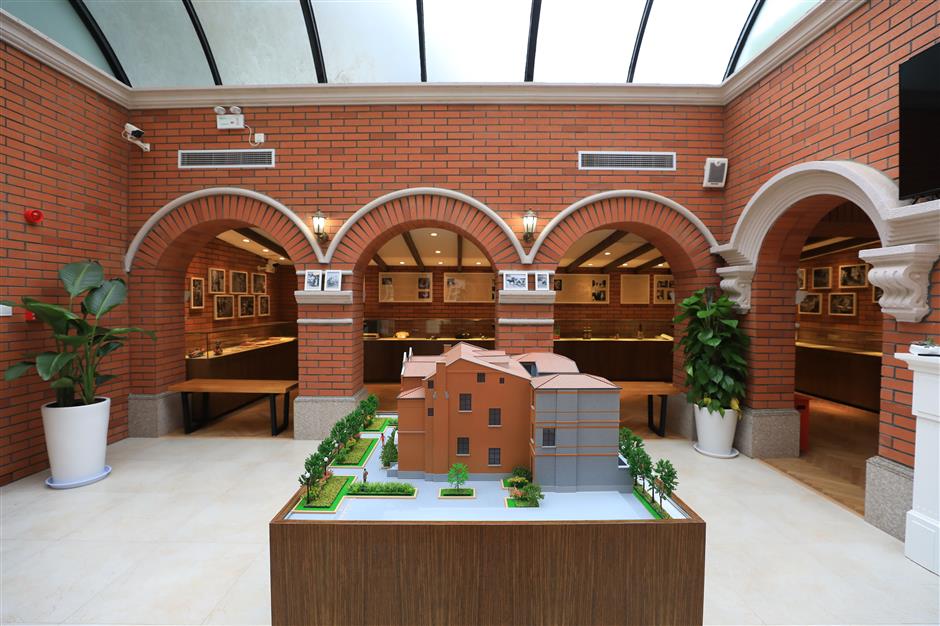 Xiwang Garden Lane Museum in Jing’an District, hidden among the red brick-and-wood garden houses on Fengxian Road, is the city’s first museum created by a community.

The museum, located in a converted pump station, opened in 2018. It was founded by the community and its residents.

American journalist and writer Agnes Smedley (1892-1950), who sympathetically chronicled the plight of Chinese people who suffered from the Japanese invasion and later the civil war, lived in garden house No. 70 on Fengxian Road during her stay in Shanghai. The room on the second floor, facing south, was her bedroom.

The museum displays copies of old photos of her with Chinese Communist leaders such as Mao Zedong, Zhou Enlai and Zhu De during her visits to Communist forces in the war zone.

Residents contributed family treasures to the museum, including a waist drum made during the Qing Dynasty (1644-1911).

Visitors can see the familiar White Rabbit-brand candy box, now rusted, and a squeezed tube of Zhonghua toothpaste. There is a leather bag labeled with “Shanghai” and an old radio cassette recorder. The antique Butterfly-brand sewing machine still works. 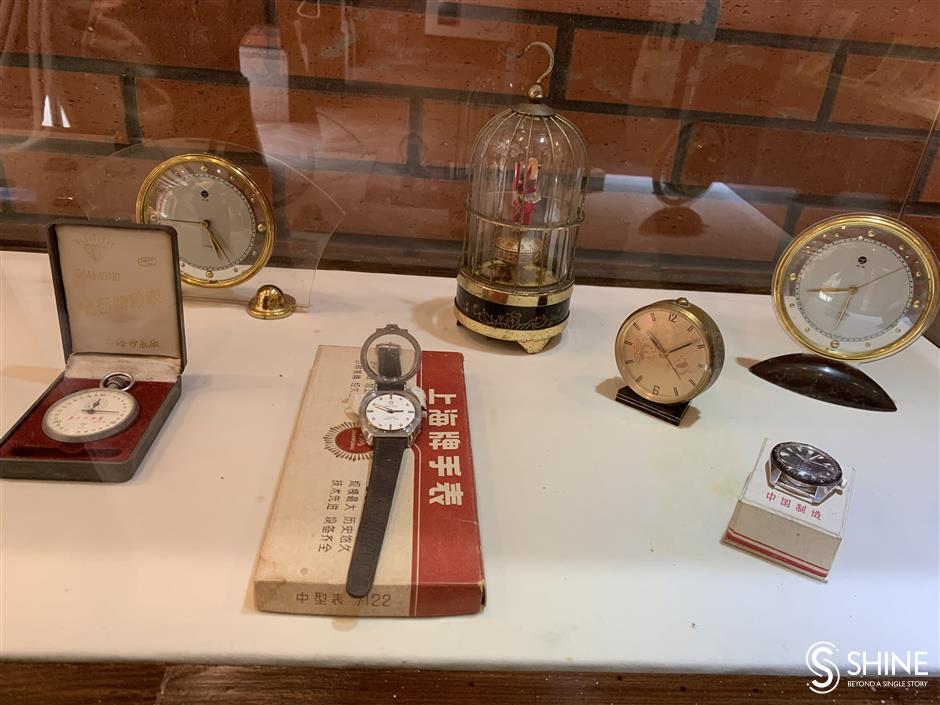 “These are the shared memories of the community, the residents, the city and even the times,” said Huang Siqi, the community staff worker who was in charge of collecting historical documents and exhibits for the museum before its opening.

The project began in 2017, and the work took about a year.

“The residents, upon hearing that there would be a museum in the community, were proud and supportive,” Huang said.

Li Chongxiang, a teacher who moved to Xiwang in the early 1990s, donated many old keepsakes collected over the years. They include a membership card for the Workers’ Propaganda Team of Mao Zedong Thought, a swimming health certificate, an old medical card from a local hospital, a monthly bus pass and ration coupons for meat, rice and candy from the days of China’s centralized economy.

“Almost every family had these certificates back then,” she said. “But few kept them. I was always reluctant to throw anything away.”

Li Guilan, 80, is one of the earliest of the residents in the community, thumbed through an old photo album that chronicled her life from childhood to a gray-haired granny.

“I’ve spent most of my life here,” she said. “I have seen this area merged, divided and re-merged under urban development.” 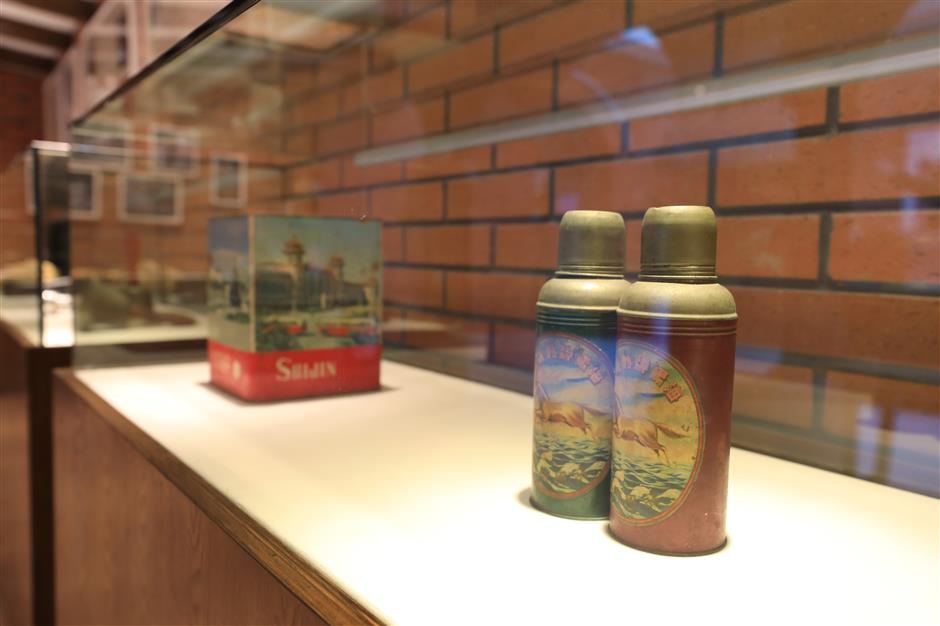 Thermoses once were used by every Shanghai family to keep hot water during the 1970s and 80s.

Musician Tu Bahai, 78, also has lived in the community for decades. He donated to the museum his copy of the theme song for the first East Asian Games held in Shanghai in 1993.

“These garden houses are the silent witness of the city’s evolution,” he said. “Every exhibit donated by residents tells a story that we should cherish and preserve for future generations.”

Though the museum is not big, its exhibits are updated every two months, thanks to the efforts of the residents.

Its changing themes have highlighted the nostalgia and the nationalism of made-in-Shanghai products, from old-fashioned children’s toys to old vinyl records and albums. Even traffic tickets show how the city’s public transportation has evolved.

The museum also provides space for community activities, like wrapping rice dumplings for the Dragon Boat Festival, paper-cutting lessons and writing Spring Festival couplets. There is also a reading room where visitors can leaf through the pages of old books.

The museum is open on Monday through Saturday, from 9am to noon. Reservations can be made for afternoon visits by calling 6256-8519. There is no admission charge.