An 87-year-old father and his 50-year-old son devote their time and skills to preserving two traditional Chinese arts — stone inlay and lacquer art.

A table in their workshop in Huacao Town in Shanghai’s Minhang District is covered with Shoushan and Qingtian stones, turquoise and abalone and pearl mussel shells. They are the raw materials that will be turned into fascinating artworks after design, cutting, trimming, carving, polishing and inlaying.

“My father insists on doing artwork every day. It’s become part of his life,” says son Yu Ping. “Most of his works have been sold overseas, but as a Chinese, he wants to leave some of his legacy here at home.” 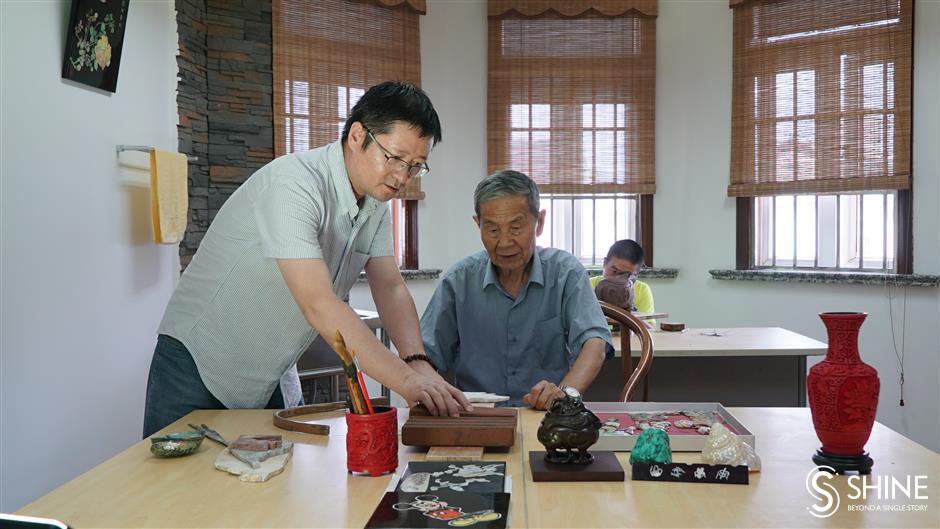 A native of Yangzhou in Jiangsu Province, father Yu Shengshou is now working on a four-panel lacquer folding screen that will be inlaid with carved stones.

The work-in-progress tells the story of Liu Bei’s marriage to Sun Shangxiang, as recounted in the classic novel “Romance of the Three Kingdoms.”

Liu wears yellow robes decorated with auspicious clouds and dragons, which symbolize his noble status. He clasps his hands in prayer-like fashion to greet Sun, who is dressed in a red and green gown with a matching long ribbon. Sitting on a stool as she looks back at Liu, Sun seems shy.

A third figure in this folding tableau is Zhao Yun, a military general who serves as Liu’s bodyguard. The general wears armor and holds a sword. The overlapping leather and metal scales are meticulously carved stones done by Yu Shengshou.

Apart from the figures, the artwork features intricate landscape and architectural elements.

“I have been working on this for half a year,” he says. “I estimate that another six months are required to finish it.”

Turning rough, cold rocks into lifelike figures and features is a “magic” skill Yu Shengshou learned from his father, who was a locally famous craftsman in Yangzhou. The family brought their artistic heritage to Shanghai when they moved to the city in 1952.

“Yangzhou has a long history of lacquer making,” says Yu Shengshou. “In the early years following the founding of the People’s Republic of China in 1949, half of Yangzhou lacquer makers moved to Shanghai, where there were more opportunities.”

After working for two years in a privately owned workshop, Yu Shengshou went to work at a lacquer factory in Huangpu District.

The family art gene went with him.

“One day, my master Qiao Songlin asked me whether I could make a pair of stone-inlaid cabinets in nine days,” he says. “I completed the task in three.”

When still in his 20s, Yu Shengshou created a machine that could be used to carve stones into thin “hairs.”

According to him, the feat was impossible to do by hand. 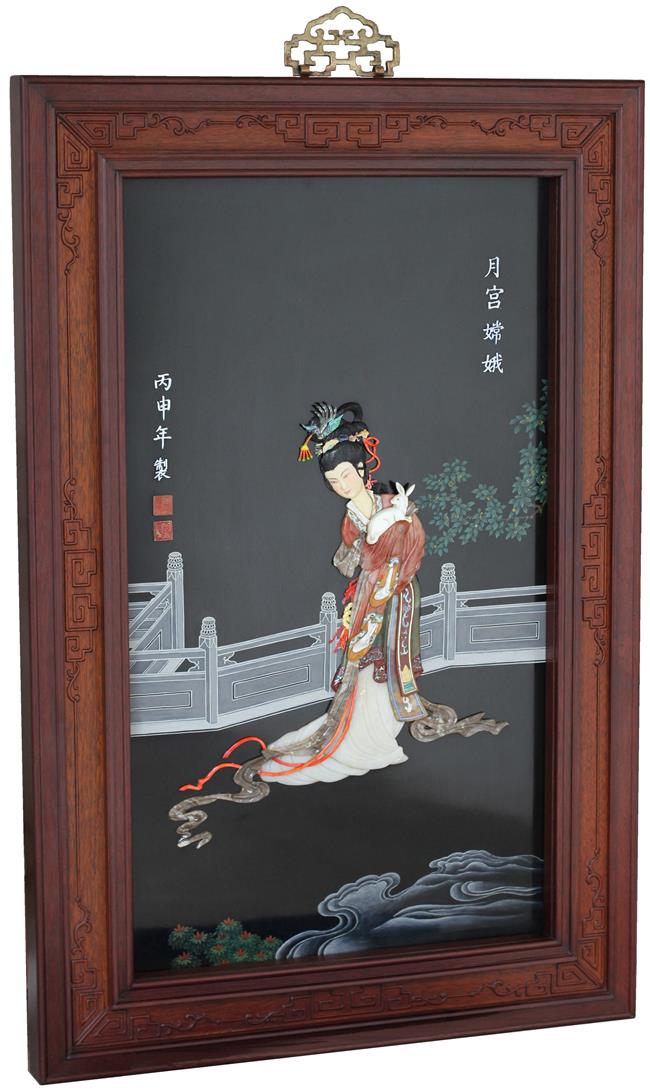 Made of materials such as ox bone, turquoise and pearl mussel shells, this work features Chang’e, Chinese Goddess of the Moon.

His work portraying the God of Longevity was sent as a national gift to the Soviet Union during the 6th World Festival of Youth and Students in 1957. Two years later, his two artworks, “Pine and Crane” and “Eight Immortals Crossing the Sea,” were chosen to decorate the Shanghai Room in the Great Hall of the People in Beijing.

“In Beijing, I once met Premier Zhou Enlai in a canteen,” says Yu Shengshou. “A young soldier accidentally knocked the premier’s plate and sent the food flying. The soldier was terrified, but Premier Zhou just smiled and said ‘never mind.’ It really impressed me deeply.”

Working as director of carving at the Shanghai Arts and Crafts Institute, Yu Shengshou took his young son Yu Ping to his workplace during summer vacations. Watching his father work, Yu Ping learned basic skills at an early age.

“At that time, I never thought I would make it my career one day,” says Yu Ping. “I just felt it was playful.”

Yu Ping formerly worked in a state-owned company and then served as an executive in a foreign trade corporation. In 2006, he gave up a well-paying job to dedicate himself to carved-stone inlay and lacquer art.

“I did it mainly because of my father,” says Yu Ping. “My father always worried that the traditional skills would be lost after his generation. I wanted to do something for him and for our family.”

Thinking is one thing; achieving is another. Yu Ping recalls his first experience with lacquer, which contains a caustic, toxic substance that caused an allergic reaction in him. He went to a hospital, but the doctor didn’t know anything about lacquer. After 15 days of suffering, his allergic symptoms disappeared.

“An elder craftsman told me it was a ‘threshold’ and only when you stepped across it could you really master the skill,” says Yu Ping.

Yu Ping now worries about the next generation.

“I know that I can’t reach the heights that my father has achieved in art, but I want to motivate young people to learn these traditional arts,” he says.

Last year, a man surnamed Huang, who is in his 40s, was apprenticed to Yu Shengshou.

“I am not alone in wanting to preserve traditional arts,” says Yu Ping, who has a daughter. “What I really want to protect are the techniques. It is beyond family inheritance. My daughter is still young, and I will not force her to follow in my footsteps or her grandfather’s. Traditional arts belong to the whole public.”

With the Year of the Ox coming next February, Yu Ping and Huang plan to create a lacquer incense burner in the shape of an ox. It will be based on an ancient ox bronze wine container now in a museum.

“I follow the principle that techniques must be traditional, while design and functionality of works can be innovative,” says Yu Ping. 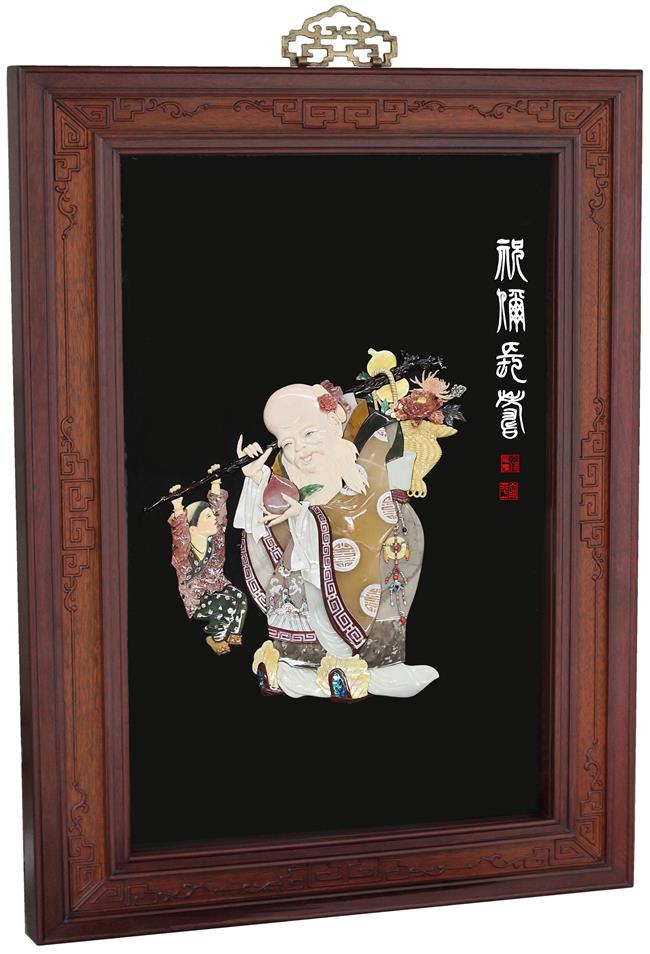 Inlaid with various stones, this lacquer artwork features the God of Longevity.