In the eyes of many, living with an artist isn’t always easy, as artists are often viewed as sensitive, wayward and moody.

But Le Zhenwen and Zhang Chi, both acclaimed ink-wash painters, defy such stereotypes, and the duo remains one of the most famous couples in China’s art circle today.

The museum has dedicated two exhibition halls on its first floor to display a group of ink-wash paintings created by Zhang and Le, some of which were created during the coronavirus outbreak.

Born in 1956 in Zhenhai, Zhejiang Province, Le attended the technical school affiliated with the Shanghai Import and Export Corporation for Arts and Crafts in the 1970s. At the time, the company had a large warehouse filled with ink-wash paintings confiscated during the “cultural revolution” (1966-76). Le considers those paintings his life’s greatest fortune, as he copied the works of masters like Wen Zhengming (1470-1559), Zhang Daqian (1899-1983) and Wang Shigu (1632-1717) while he was a student.

It’s also where he met his classmate Zhang Chi, and the two immediately fell in love and developed a common interest in art.

Born into an artist’s family, Zhang’s father Zhang Daxin was a renowned “New Year Painting” artist. As her father wished, Zhang began to learn ink-wash painting at the age of 7.

Like his wife, Le developed an interest in ink-wash painting and calligraphy as a child.

As such, encountering these original masterpieces was an eye-opener for the young couple. Day and night, they copied and absorbed the classic works’ elegant curves and brushstrokes.

In the 1980s, Le furthered his studies in Tokyo, where he was greatly influenced by the arrangements and harmony of Japanese painting.

Splitting time between Tokyo and Shanghai, the couple gradually garnered acclaim in both Japan and China. However, they have different subject preferences.

The highlight of Zhang’s ink-wash paintings is “Spectacular Shanghai,” which took 10 years to complete. The 70-meter-long painting begins in Anji, Zhejiang Province, the source of the Huangpu River, and meanders through Wusongkou Wharf, Lujiazui, the Bund, Shanghai Museum, Shanghai Concert Hall and finally the Square Pagoda Garden in Songjiang. The complete scroll includes 128 well-known venues.

“Shanghai is always growing, filled with amazing vitality and energy,” she said. “So, in the past decade, I visited many new landmarks, rising one after another in the skyline.”

Zhang adopted a style rooted in realism, yet with an implicit approach under her brushstrokes. She would adjust building proportions to make them look more appealing.

Unlike Zhang, Le’s ink-wash works fuse traditional techniques with a modern flare. One obvious characteristic is his attention to small details.

“ I like ukiyo-e and the quiet nature of Japanese people, and I’m sure my works reflect that,” Le said. 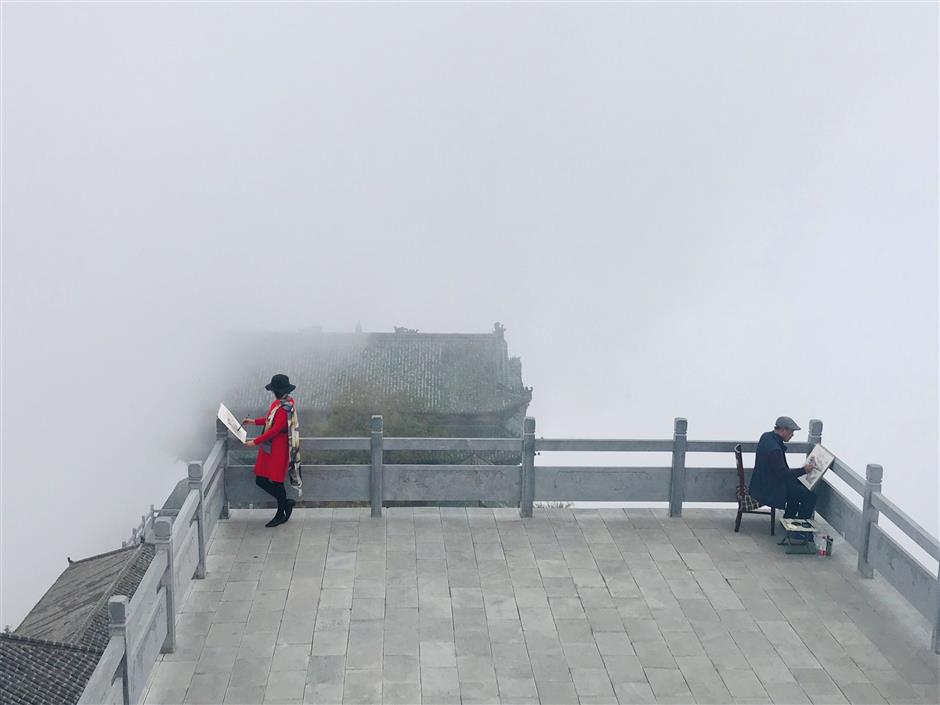 Zhang Chi (left) and Le Zhenwen do sketches while traveling to different countries and cities.

Unlike some of their peers who prefer to isolate themselves in their studios, the couple prefers to be close to nature. Every year, they travel extensively to sketch. In addition to taking in splendid natural scenes in China, they have traveled to Brazil, Canada, Argentina and Japan to capture compelling natural beauty.

“When meandering in the mountains or the forest, I am often fascinated by a rock, a ray of sunshine, a pond or a vast cloud,” Le said. “Nothing in my life is more joyful than when I feel I’m part of such scenes.”

Last year, to the surprise of many, the couple went to the South Pole.

“At the beginning, I was a bit unsure whether I could withstand the rolling waves in the Drake Strait,” Zhang said. “After all, we’re no longer young, but we were lucky that the sea was quite calm.”

Zhang said their experience at the South Pole was incomparable.

“The South Pole is the last pure land on Earth, so quiet and profound,” Zhang said. “We felt so close to the universe. While we were sipping champagne on a boat near an iceberg, it was like we had melted into a world of ice and snow. It was a miraculous thing to see ice-capped mountains that have silently stood for thousands of years. I still remember the rosy aura the sunset cast on the sea and mountains. So stunning and overwhelming. It was really a once-in-a-lifetime experience.”

The exhibition includes a cluster of ink-wash paintings inspired by their South Pole odyssey.

“They are the greatest memories of our lives,” Zhang said with a smile. 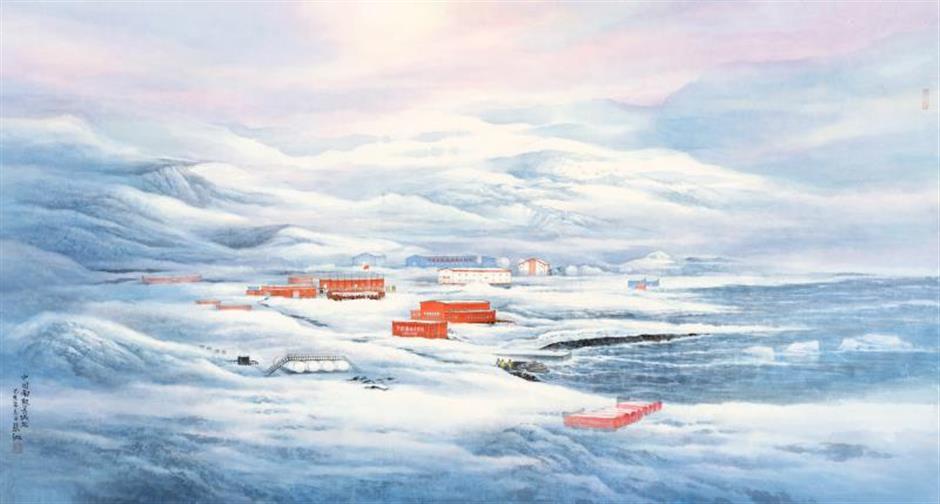