"Water Margin," one of the “four great classical novels” of Chinese literature, tells the Song Dynasty (960-1279) story of 108 outlaws who gathered at Mount Liangshan to take up arms against the government. The group was later granted amnesty upon surrender and sent on campaigns alongside government troops to fight peasant rebels.

The novel, attributed to Shi Nai’an, is filled with expressive characters, dramatic conflicts and an engaging plot. It has been adapted into Peking and Kunqu operas. 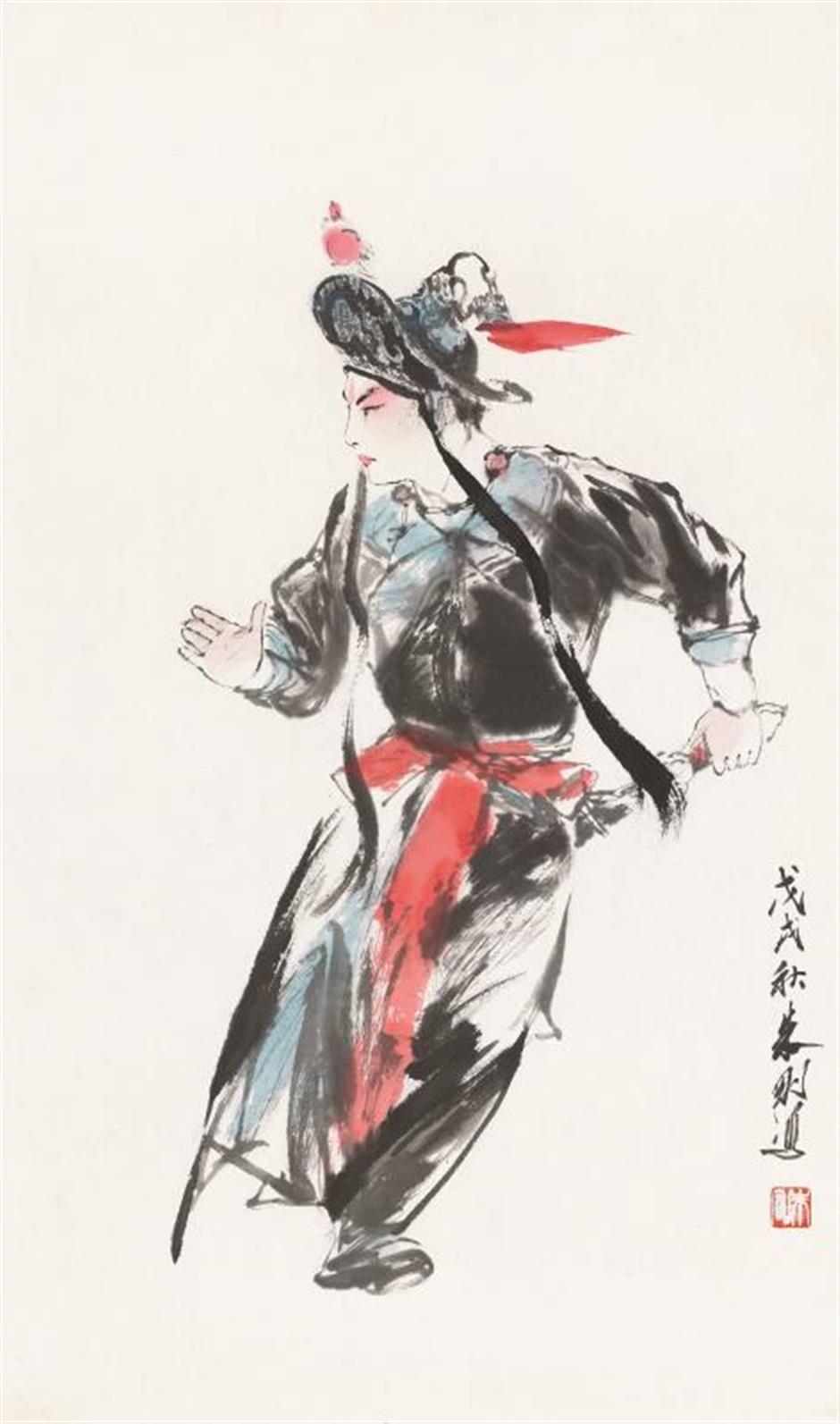 The “Panther Head” in painter Zhu Gang’s “Night Escape” is full of motion.

Lin Chong, nicknamed “Panther Head,” is prominent among the 108 heroes in the novel. He was a martial arts instructor who coached 800,000 imperial guards in the then capital city of Kaifeng, but he was ultimately framed, exiled and almost killed by government forces. Seeing no alternative, Lin escaped to Mount Liangshan and became an outlaw.

One day, Lin’s wife Zhang was praying in a temple, where she was molested by Gao Yanei, the playboy adopted son of Grand Marshal Gao Qiu. Lin rushed to the temple and saved her from the attack.

The playboy begged the marshal to teach Lin a lesson and secure Zhang for himself.

The marshal knew Lin loved excellent weapons and secretly arranged for a man to sell him a precious sword. A few days later, Gao summoned Lin to his house on the pretext of wishing to see Lin’s new treasure.

When he arrived, Lin was misdirected to the White Tiger Hall, a place where secret meetings were held and weapons prohibited. His low-ranking status, not to mention the sword, made it forbidden for him to enter the hall.

Gao then accused Lin of wanting to assassinate him and immediately had him arrested. Gao wanted Lin dead, but through the intervention of Kaifeng’s governor, Lin was only exiled to Cangzhou in Hebei Province.

Two escorts who were to accompany Lin to Cangzhou were bribed by Gao and ordered to kill Lin. They tied him to a tree in a wild forest area. Fortunately, Lin was rescued by his monk friend Lu Zhishen, who had been following along on the trip surreptitiously.

Upon arrival in Cangzhou, Lin was assigned to work as a watchman in a fodder depot. One snowy night, two of Gao’s henchmen set fire to the depot, hoping to burn Lin alive. But Lin had left the depot earlier to buy some wine in town.

When he returned, the depot was burned to the ground, so he took shelter in a nearby temple. There he overheard a conversation between the two henchmen and learned of the plot to kill him. He slew both men and escaped into the snowy night.

His ties to officialdom so obviously severed, Lin went to Mount Liangshan and decided to rebel against the government.

Painter Zhu Gang’s “Night Escape” is full of motion. Lin, dressed in all black, is struggling in a snowstorm. Zhu used different shades of ink — dry, wet, thick and light — and various brush thicknesses to convey a sense of urgency in Lin’s flight. With simple strokes, Lin’s anger, depression and sadness are vividly depicted. 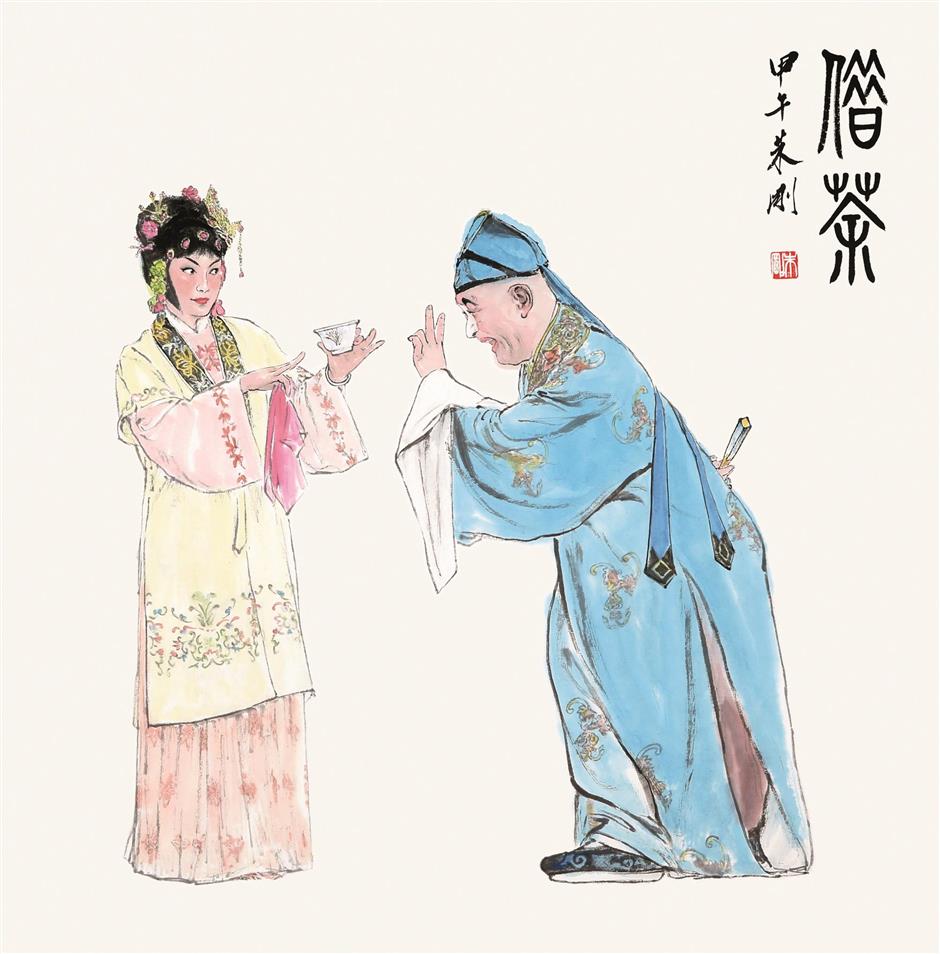 Zhu Gang’s painting of “Asking for Tea” captures the mindsets of the two main characters.

In another episode of the novel “Water Margin,” Zhang Wenyuan, a government worker, is attracted by the beauty of Yan Xijiao, a concubine of a government colleague named Song Jiang.

Song is later framed and flees to Mount Liangshan, where he joins the rebel army.

Zhang seduces Yan on the pretext of asking for a cup of tea, and they began a secret affair. After she is stabbed to death by Song, Yan’s ghost shows up at Zhang’s residence for a reunion.

Yan was Song’s concubine, but in the Peking Opera version, she is portrayed as just a girl seeking true love.

The opera, full of disturbing ghost imagery, was banned from performance after the founding of the People’s Republic of China in 1949. It didn’t return to the stage until 1985 in rewritten form to focus on the love between a human and a ghost.

Zhang on the stage is a serial womanizer, but also a bit bookish. He uses a folding fan to illustrate both lechery and romantic charm. Yan, young and beautiful, is portrayed as a lovelorn woman who deserves sympathy for choosing the wrong man.

The opera “Asking for Tea” is hard to perform because it requires neither special singing skills, complicated body movements nor thrilling stunts. Performers are required to dig deep into the inner beings of their characters.

When Zhang meets Yan, he is struck by her beauty. He exclaims, “What fine weather!” to show his excitement. Small gestures — a dip of the head, a twitch of the shoulder and even a kiss on Yan’s hand — are the first tentative steps he takes to seduce her. Yan’s reaction? She scolds him while smiling and refuses him shyly. “Remember we will have tea tomorrow,” she finally says, suggesting capitulation.

Zhu’s painting of this scene from the opera expertly catches what’s going on the minds of Zhang and Yan. He is leering at her with his body leaning forward. She is pink-faced with a shy smile, hinting at her hidden desire for love.