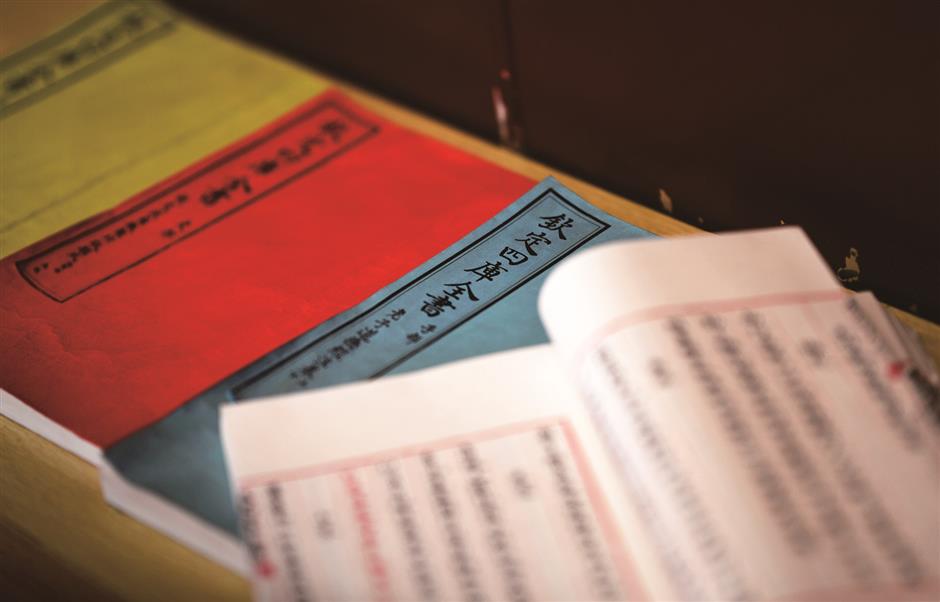 It is commonly known that the “Siku Quanshu,” or “Complete Works of Chinese Classics,” is China’s largest ancient encyclopedia.

It is commonly known that the “Siku Quanshu,” or “Complete Works of Chinese Classics,” is China’s largest ancient encyclopedia. But how long would it take to read the monumental work? It’s assumed that if someone spent 10 hours a day reading 3,000 Chinese characters per hour, from the day he or she was born, that person would probably finish the encyclopedia by the age of 80.

The “Siku Quanshu” contains over 3,460 books with around 79,000 chapters, which has more than 800 million Chinese characters. “Siku,” which translates as four sections, indicates the encyclopedia is catalogued into four parts, that is, jing, or the Confucian classics, shi, or the history, zi, or the philosophy, and ji, or the literary collections. The covers of the four divisions come in different colors: green, red, blue and white, and grey respectively, which symbolizes the four seasons.

Apart from ancient Chinese classics like “The Analects of Confucius” and “The Historical Records,” the collection also includes the masterpieces from Japan, Vietnam, India and European countries.

Emperor Qianlong (1711-99) gave the order to compile the “Siku Quanshu” during the Qing Dynasty (1644-1911). He issued a decree to provincial officers to collect locally important books and send them to the capital. However, only a few people handed in their books.

In 1773, the emperor made the imperial edict again and introduced an incentive policy. People who handed in over 500 books would be rewarded with work on the “Gujin Tushu Jicheng,” also known as the “Imperial Encyclopedia,” whilst those who sent over 100 books would be gifted with “Peiwen Yunfu,” a Chinese rime dictionary of literary allusions and poetic dictions. The donors also had an opportunity to let the emperor write an inscription in their book.

The compilation work was completed by an editorial board, which included over 360 scholars with Ji Yun (1724-1805) as chief editor.

Ji, also known as Ji Xiaolan, was an influential philosopher, politician and writer of the Qing Dynasty. Regarded as a wonder child, Ji was gifted with an extraordinary memory. He became jinshi — a successful candidate in the highest level of imperial examinations — in 1754 and entered the Imperial Academy, which was the top academic administrative institution.

Life was not always smooth sailing for Ji and he was exiled to today’s Xinjiang Uygur Autonomous Region because of divulging government information to relatives. But he soon returned to the capital after a ministerial recommendation and served as chief editor of the “Siku Quanshu.”

The task took Ji and hundreds of scholars over a decade to complete. Instead of being printed from wooden blocks, the original versions of “Siku Quanshu” were handwritten. More than 3,800 people were selected by the government to participate in transcribing the text. They were asked to write at least 1,000 words a day and 330,000 words every year.

If someone’s handwriting didn’t look neat, he would be punished to write 10,000 more words. The participants were granted with different official positions according to the number of words they had copied.

Another three manuscripts were made later and placed at the pavilions in Yangzhou, Zhenjiang and Hangzhou.

Among the seven copies, only three and a half of them survive today.

The encyclopedia collected at the Summer Palace was destroyed in 1860 during an invasion of Anglo-French allied forces. Likewise, the one in Yangzhou was damaged during the Taiping Rebellion from 1850 to 1864.

The copy stored in Hangzhou was partly destroyed due to the collapse of the pavilion. Rearranged and restored by bibliophiles Ding Bing and Ding Shen, it is stored in Zhejiang Library.

Two manuscripts are kept in the Palace Museum in Taipei and Gansu Provincial Library.

Becoming part of the holdings of the National Library of China, the edition originally collected at Wenjin Pavilion in Chengde is the best-preserved. The 128 wooden shelves used to store the books, the 6,144 protective covers and 36,304 volumes all remain intact.

Celebrating the opening of the new library house in 1931, the books were displayed to the public. However, one book was stolen during the exhibition. Knowing the news, Fu Zengxiang, minister of education, asked staff not to breathe a word of the thing to anyone.

Meanwhile, Fu secretly sent people to pay attention to Liulichang Street, which is an antique market in Beijing. After six months, a middle-aged thief who wanted to sell the book appeared in the market. The case was resolved and the book returned to its “safe home.”