The Suzhou Kunqu Opera Theater of Jiangsu on Jiaochang Road is regarded by the public as one of the most beautiful theaters.

With artists such as Yu Jiulin, Shen Fengying and Zhou Xuefeng, all winners of the China Theater Plum Blossom Award, China’s top theatrical award, the theater is committed to promoting Kunqu Opera.

“We plan to build a Kunqu Opera experience park to express Oriental aesthetics through the combination of drama and space, which can be understood as a kind of performing art,” said Yu, who is also the theater’s deputy director.

Thus “The Story of Jade Hairpin” is performed in the theater’s garden, “Six Records of a Floating Life” is presented in the iconic Surging Waves Pavilion and “The Peony Pavilion” is staged beside the Tiger Hill Pagoda.

“A performing art with a history of over six centuries, Kunqu Opera has always been changing, and I think this change is more of a kind of progress,” said Yu.

“It must be combined with the times and will certainly produce a new kind of understanding.”

Lu Jia, leading actress in the youth edition of “The Peony Pavilion,” thought the new performances would appeal to the younger generation.

“Kunqu Opera is the origin of all kinds of traditional operas in China. Although it is famous for its elegance, many gestures and movements in the play are from people’s daily life.

“This time, we improve the performance with exquisite costume and stage design, which successfully win the hearts of the younger generation.

“Most of the performers on the stage are lads and lassies in their early 20s. Hence, Kunqu Opera has become a fashion on campuses when we tour around colleges and schools throughout the country,” Lu said.

Fellow actress Shen Guofang said Kunqu Opera was unimaginably popular when they performed overseas. Actors and actresses from the theater have visited major European countries and performed in Uruguay and Argentina.

Foreign audiences were delighted by the performances and immediately fell in love with Kunqu Opera, she said.

“What we brought them was a window on traditional Oriental culture. From this window, it can expand infinitely from subtle places. They would like to come to China, or they would like to understand a kind of Chinese culture. Well, this is what I feel the most.” 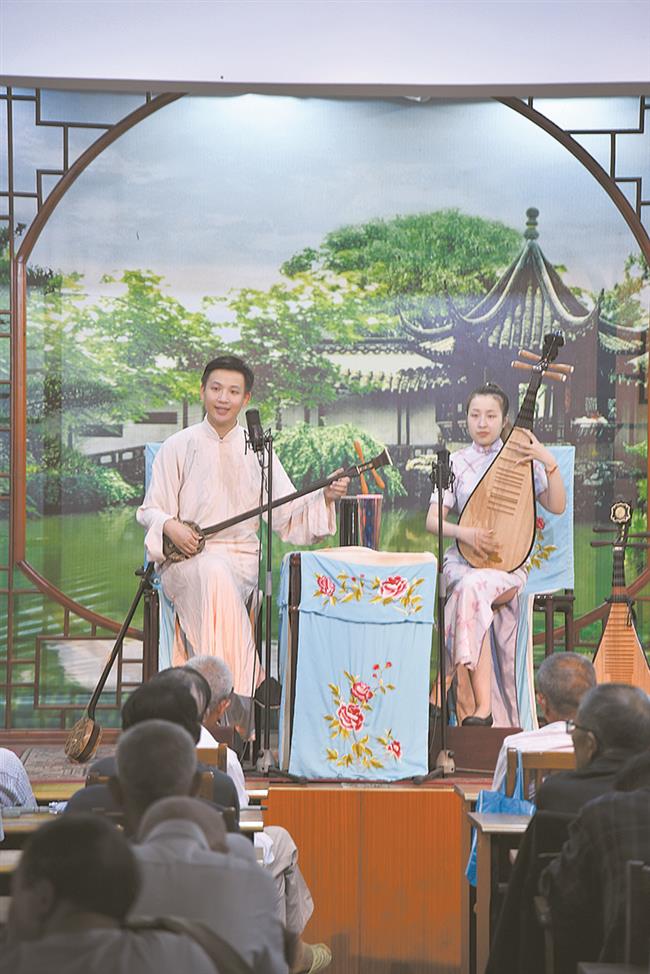 Suzhou, birthplace of Kunqu Opera, is also home to pingtan, storytelling to music in Suzhou dialect.

Xing Yanchun, a Suzhou native and pingtan star, was honored with a Lifetime Achievement Award at the 11th China Quyi Peony Awards on October 15 at the Suzhou Grand Theater.

The awards ceremony marked the conclusion of the second Suzhou Jiangnan Culture and Arts and International Tourism Festival.

Xing has devoted himself to enthralling audiences with his performances, creating new dramas, cultivating apprentices and engaging in management.

A pingtan performance in the renowned Lingering Garden was a highlight of the festival.

Suzhou pingtan tells the story of Suzhou and carries forward the traditional culture of Suzhou. It was included in the national intangible cultural heritage list in 2006.