Something mysterious about this old museum

Lu Jie visited the Shanghai Natural History Museum on Yan’an Road E. in the summer of 2014 when she heard it was about to be relocated.

In the dimly lit, half-closed neoclassical building, photographer Lu and her student Zhang Xuan worked for about a year to take a large number of photographs and document the collective memories of almost every Shanghai child.

Recently, Lu and Zhang put on “The Echo of Nature” exhibition at the M50 art park, displaying the hidden side of the last few days of the museum before it moved to today’s site on Beijing Road W.

“The air was filled with the pungent smell of formalin,” Lu recalled. “Some famous specimens such as the ancient Yellow River elephant, king crab and vulture had been relocated, but the dim, enclosed space with mysterious yet elegant quality suddenly pulled me back to my childhood when I first visited it as a kid.”

For Shanghai generations born during the 1970s and 1980s, the museum was always a “creepy” and mysterious place due to its old-fashioned decoration unchanged for decades and scary specimens such as the Loulan woman corpse and dinosaur skeletons. It would have been an unforgettable memory for a child to walk on those creaky old wooden floors when a human skull or a tiger suddenly popped up. 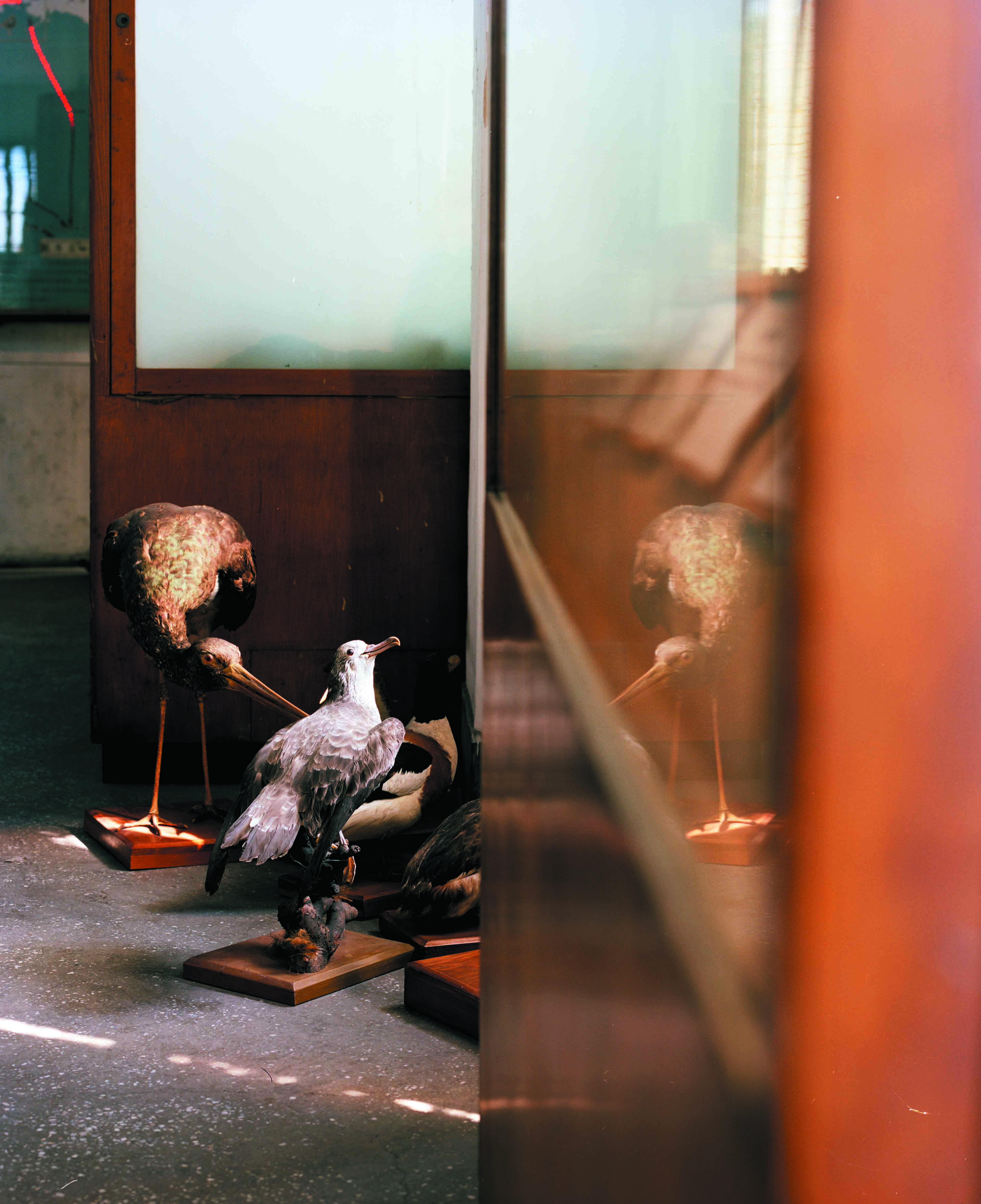 “When I returned there in 2014, nothing seemed changed and time had just stopped in that dusty space,” Lu said.

Lu tried to explore the possibility of reflecting the passage of time, the conflict between animals and humans, and the division between life and death in the form of images through those specimens in the confined space.

She removed the veil of a museum as a scientific site and brought something upsetting and unreal for the viewers. The dinosaur skeletons, the shadow of a bear and a deer’s head raised high, somehow, presented a sense of absurdity and the fantastic.

The old-fashioned layout and furnishings that took on a mysterious yet poetic esthetic, mixed with the smell of formalin, stimulated the photographer’s nose and brain.

“The biological species were classified and displayed in the rule of pragmatism — from low to high life, harmful and beneficial to human, and whether related to man’s production practice,” she said. “You can feel the thing that once silently controlled here and now disappearing.”

The new natural history museum that opened in 2015 is a totally different one with a large amount of new construction materials, multimedia layouts and high-tech equipment.

“It’s a feast to the eyes of course, but I feel the alienation and overwhelming shock that I cannot resist. I sense a new power is running the new museum,” Lu said.

Photography critic Lin Lu said: “Lu’s photos try to make us convinced that the real world has long gone. She wants us to understand the world we’re in currently. Her natural history museum is not for us to recall or remember old days, but to point at the future, an anxiety-ridden future.”