The costumes of opera are an intricate art

For many foreigners, their first contact with Chinese opera is a jolting experience, with its shrill voices, stylized movements, exaggerated make-up, lively music played on traditional Chinese instruments and, of course, exquisite, colorful costumes.

Shanghai has been a leader in making Chinese opera costumes since the late Qing Dynasty (1644-1911).

That position was the result of an array of skilled craftsmen, including master Huang Jinrong, moving from Beijing and Suzhou to Shanghai. They gathered on what is today Sipailou Road near Yuyuan Garden in Huangpu District and opened workshops that mainly focused on the making of Chinese opera costumes.

In the 1930s, most of the workshops relocated to Guangdong Road. One of them, called Jiangshunxin, provided tailor-made costumes for the Four Great Dans of Peking Opera — Mei Lanfang, Cheng Yanqiu, Shang Xiaoyun and Xun Huisheng. 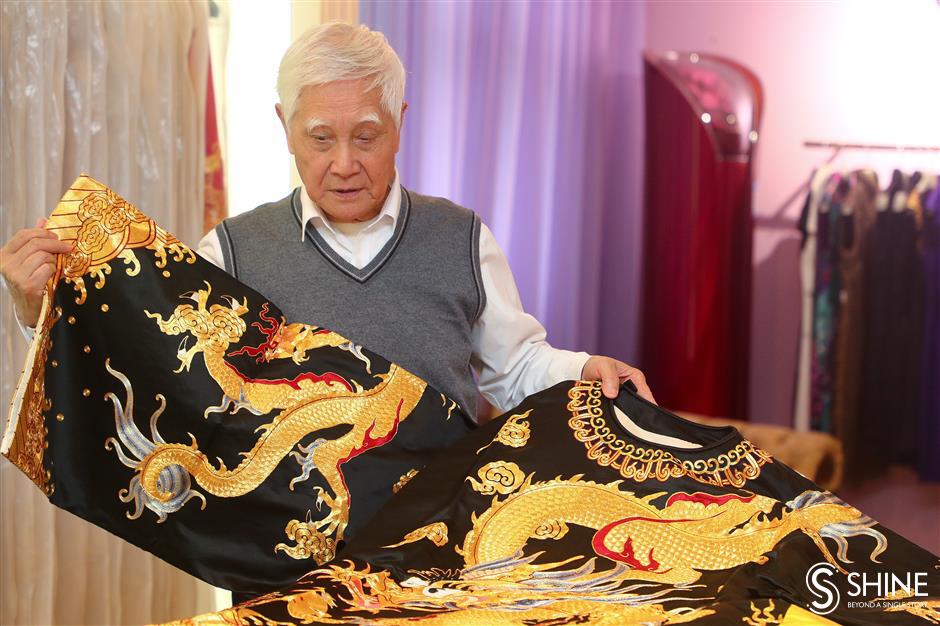 Xu Shikai, 82, is a master maker of Chinese opera costumes.

Xu, a cowherd, followed a relative who worked at Jiangshunxin to Shanghai when he was only 13 years old. He was just a little bit taller than the worktables in the workshop. His initial job was to look after the owner’s two children by day. At night, he practiced needlework and slept on the worktable.

“I earned 2 yuan (30 US cents) a month, and was an apprentice doing hems in my first three years,” Xu said. “In the second three years, I assisted in making costumes for lesser opera characters.”

Xu worked with Xie Xinsheng, a Huang protégé who was the second generation of costume-making in China. Xu was often asked to deliver and collect designs from Xie. During the process, he secretly learned Xie’s skills and remembered the patterns he designed.

“In operatic circles, there is a saying: ‘Better wear rags than wrong clothes,’” said Xu. “There are strict rules of patterns on costumes. For example, the number of dragon claws and the position and color of peonies have to be exact. A costume design must match the character.”

In 1956, the government began to implement a system of joint state-private ownership. The costume workshops and more than 20 other tailor shops were combined into a state-owned Chinese opera costume factory.

Xu rose to become responsible for purchasing materials for costumes, which often had more than 900 components.

“There are more than 20 types of silk and more than 100 kinds of threads of various colors and degrees of thickness, let alone countless accessories such as wigs, shoes and ornaments,” said Xu. “In order to find the highest-quality materials, we traveled around the country.”

Xu’s wife Chen Lirong, now 78, also worked at the factory. She was a formally acknowledged apprentice of master Xie.

“Inviting some troupes to perform, we held a great ceremony at the Huangpu Theater,” said Chen. “I made a deep bow to master Xie and signed a three-year contract. I learned drawing patterns from him. The work was demanding.”

“The most significant requirement for the costumes is that they be solid,” said Xu. “At the same time, they need to be comfortable enough for opera artists to do their movements.”

Wearing a thimble, Xu shows me the step of applying paste, which is called biejiang. Bie is the abbreviation for Chinese words meaning “pins,” while jiang indicates the paste.

Taking out a red silk fabric embroidered with dragons, Xu attaches it to a sewing table covered with foam and an ordered array of pins. Before inserting a pin, Xu rubs it in his hair.

“Hair is oily, so rubbing pins in the hair makes them easier to insert into the fabric,” said Xu. “Anyway, it has become my habit.” 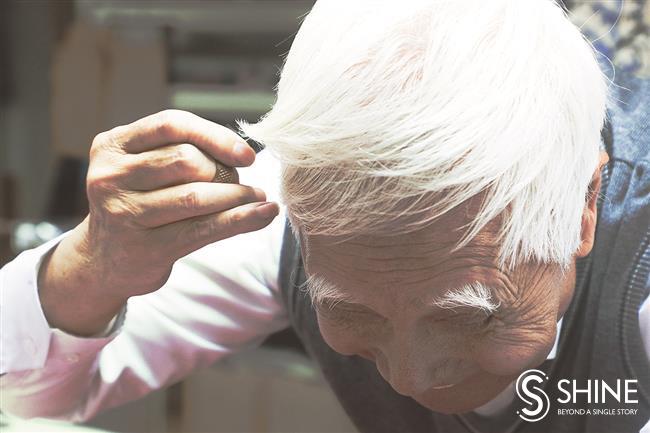 Xu rubs a pin in his hair to give it a bit of oiliness and make it easier to insert into silk fabric.

“It seemed as though it is easy to do, but actually it is not,” said a young tailor watching from the sidelines. “The density of pins, the thickness of the paste and the flatness of the fabric all matter.”

Chinese opera costume-making hit a low ebb during the “cultural revolution” (1966-76). All styles of Chinese opera were halted, except for “model operas” that had revolutionary themes.

“It is sad that most costumes made before that time were destroyed,” Xu said.

After China emerged from that period, traditional opera came back to the fore and demand for costumes surged.

“I worked from morning to late night to procure materials,” said Xu. “Once costumes were completed, they were immediately sold.”

Despite retirement, Xu and Chen are busier than ever. They are working with Zhou Zhuguang, art director at esteemed cheongsam shop Hanart, to revive Chinese opera costumes and imperial court robes. They are also transferring opera costume patterns to cheongsams.

Their works have been collected by the Shanghai History Museum, the Shanghai Museum of Arts and Crafts, and a restaurant serving imperial cuisine in Shanghai. 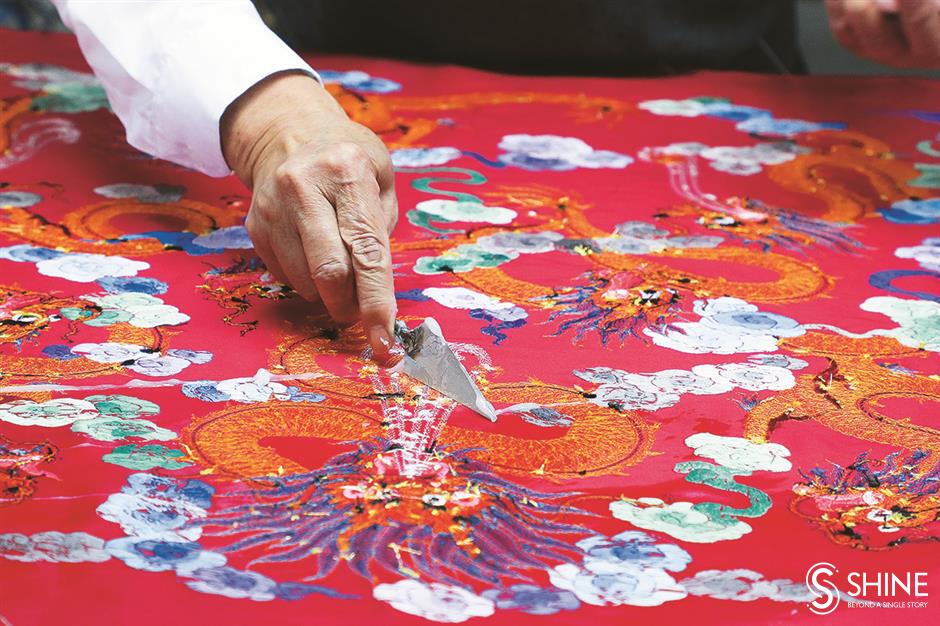 Xu applies starch paste evenly on fabric with a small spade to prepare it for ironing.