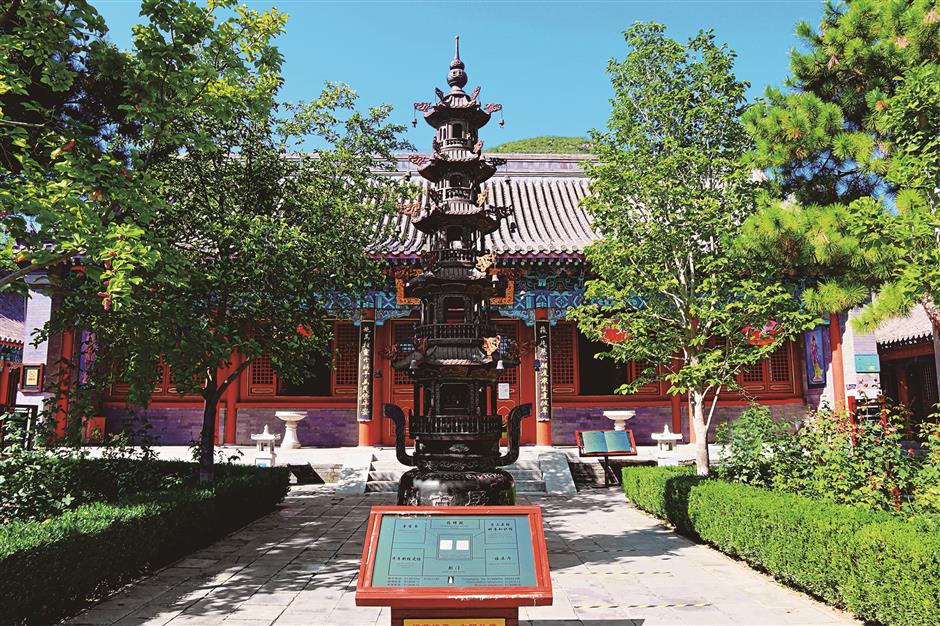 Yunju Temple is famed for its rich collections of Buddhist sutras on stone slabs, aluminum plates and its magnificent ancient towers, among many other precious ancient treasures.

About 70 kilometers away from downtown Beijing sits Yunju Temple, famed for its rich collections of Buddhist sutras on stone slabs, aluminum plates and its magnificent ancient towers, among many other precious ancient treasures.

First built in AD 631 by the monk Jingwan, the temple today comprises of five courtyards and six hall compounds. It leans against the foot of Baidai Hill, which was later called the Hill of Shijing (stone sutras) due to the discovery of a large number of Buddhist texts in the summer of 1957.

The unearthing of the Buddhist texts also signaled the rebirth of the temple, which was destroyed in 1942 during the war against Japanese invaders.

Two main towers stand opposite each other in the south and north. The southern tower fell because of gunfire, leaving only the northern tower, a brick-laid, 30-meter-high construction that was built in the Liao Dynasty (907-1125).

It had an octagonal base, a two-story attic and a “fubo” roof (in the shape of an inverted bowl), which was a very rarely seen architectural style among the old Liao towers.

Designed with seven floors in a square shape, the four towers were carved with various Buddhas.

The tower built in AD 727 was engraved with a statue of its donor, who was clearly a foreigner with a high nasal bridge and deep-set eyes. It reveals the extensive and broad exchanges between the Tang Dynasty and western Asia.

The southern tower collapsed, but a broken stone stele threw light on the sutras that had been buried underneath for centuries. It read, “One step ahead of the tower, there is an underground palace that stores 5,000 slabs of stone sutras.”

In 1957, archeologists managed to dig out the palace, 5 meters deep and 19 meters wide, where more than 10,000 stone slabs of sutras were discovered.

The nearby Hill of Shijing was then discovered. Standing about 450 meters high, the hill had nine caves, which housed 4,196 stone slabs of sutras. The total number of stone sutras in the two places added up to 14,278, which included 1,122 books of Buddhist texts in 3,572 volumes in 35 million Chinese characters.

The stone carving, started by the temple’s founder Jingwan, went through six dynasties, spanning 1,039 years before it was finished. The stone sutras avoided wars and political turmoil, and almost all of them are still intact today.

The Leiyin Cave, the only one open to the public, was found by the monk Jingwan, who also worked on the four stone pillars of 1,056 Buddhas.

In addition to the stone sutra, the temple stores more than 22,000 volumes of paper sutras, all printed and hand-written during the Ming Dynasty (1368-1644).

The most precious one is the “Dafang Guangfo Huayan Jing” (Avatamsaka Sutra), which was written in the blood of Zuhui, a master monk, who pierced his tongue to finish the copy, showing his absolute devotion to the Buddha.

The sutra “Long Cang” (Hidden Dragon), completed during 1733-38, was a wooden-carving copy that has more than 77,000 wooden planks, comprising the most famed translated versions of Indian Buddhism over 2,000 years.

The temple also preserves the brownish grains of “sarira,” the remaining crystalline after the cremation of the Buddha Sakyamuni.

They were found in the Leiyin Cave in 1981, the only sarira kept in a grotto throughout the world.

It’s one of China’s most precious treasures. The other two sarira are a Buddha’s finger bone in Famen Temple, Shaanxi Province, and a Buddha’s tooth in Babei Temple, Beijing.