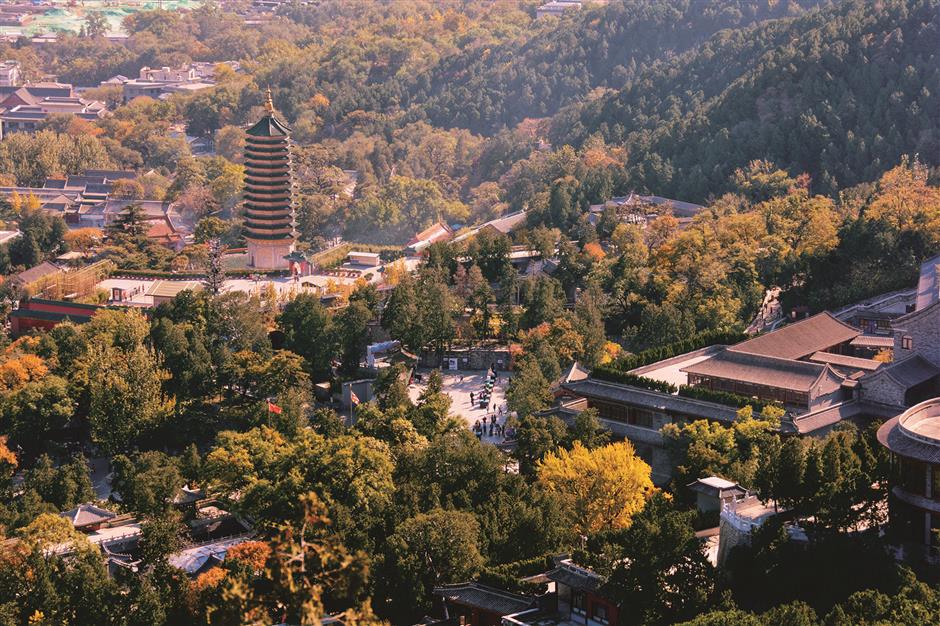 At the top of a meandering path flanked by sacred stones, the Dabei Temple quietly hides itself in the deep forest on Xishan Mountain in Beijing. The temple honors the Bodhisattva of compassion and mercy, Guanyin.

At the top of a meandering, rising cobblestone path flanked by uniquely shaped stones, the Dabei Temple quietly hides itself in the deep forest on Xishan Mountain in China’s capital Beijing. It’s a sacred shrine that has worshiped the Guanshiyin Bodhisattva (also known as Guanyin) for more than 1,000 years.

Shanmen Hall (the front gate) is a construction of colored bricks, white granite and grey tile roofs. The exterior wall was painted with the traditional Chinese pattern “100 birds paying homage to the phoenix.” Emperor Kangxi (1654-1722) named the temple “Dabei,” meaning “great compassion,” and had it inscribed on a horizontal piece of granite, which implied the Buddhist shrine’s royal connection.

The gate was carved with elephants, lions, dragons and a pair of flying goats. The top of the door-frame features three engraved gods.

The one in the center has a human face with a beak, which corresponded with the image of the roc with colossal golden wings in the Buddhist sutra. On the two sides, there are stone windows adorned with motifs of the mythological Kui dragon and honeysuckles.

The Maitreya, regarded as a future Buddha of this world in Buddhist eschatology, sits in the Shanmen Hall. With a big belly and a smiling face, the Maitreya is also an emblem of happiness and tolerance in Chinese culture. His guards, the four heavenly kings in armor with their weapons, stare down with fierce faces. The five statues are all contemporary works.

The Mahavira Hall, the main hall in the first courtyard, is home to the Buddha of Trinity, guarded by 18 clay sculptures of arhats, who have attained the goal of the religious life. All made in 1298, they are vivid in various postures and facial expressions. They sit, stand, sleep, dance or lay on their side, smiling, meditating or staring into the distance. The sculptures are said to be works of Liu Yuan (1240-1324), who used powders of sandalwood and fragrant sand to scent the sculptures.

It’s believed the great master made all the clay and bronze sculptures in the big temples in today’s Beijing and Duolun City in the Inner Mongolia Autonomous Region. Some emperors of the Yuan Dynasty (1279-1368) sang high praise for his talents and even granted two royal maids to Liu.

After seven centuries, the sculptures today are still sending off pleasant scents. Many old Buddhas statues were destroyed in the “cultural revolution” (1966-76), but the 18 arhats were surprisingly kept intact.

Lush green bamboos are thriving in the courtyard, decorated with vanilla and pots of bonsai. Of a rare species, the bamboos still grow vigorously in the snowy winter, making it a popular scenic spot for people to enjoy the flourishing green view in the freezing season.

In the back of the main hall, there stand two giant, towering gingko trees, which are said to be 800 years old.

It’s been a tradition to plant gingko trees in a Buddhist temple in China because the tall, long-lived tree is a symbol of uprightness and dignity, and its golden-yellow leaves echo with the monk’s light-brown robe.

A few steps away is the Dabei Hall, built in the Ming Dynasty (1368-1644). It worships the Guanyin, a motherly, compassionate Buddha.

The last Yaoshi Hall was renovated a few years ago. Its layout and decoration strictly followed the architectural style of the Qing Dynasty (1644-1911). Yaoshi (Buddha of Medicine Bhaishajyaguru) is the Buddha of good health, who can dispel the illness. A dozen of gods of medicine stand on two sides. They were all made of camphorwood, covered with gold-foil on the surface.

In the back of the temple, there is a shallow trench, with wild red begonia.

A widely believed story goes that the place used to be a hot spring. Two golden mules often came here to drink water.

A greedy local farmer wanted to catch them and sell them. He waited for the mules one night and tied them with the rope he had prepared in advance. But the animals with mighty force dragged him off the cliff to his death.

Today two big rocks in the shapes of two mules silently lie in the valley.